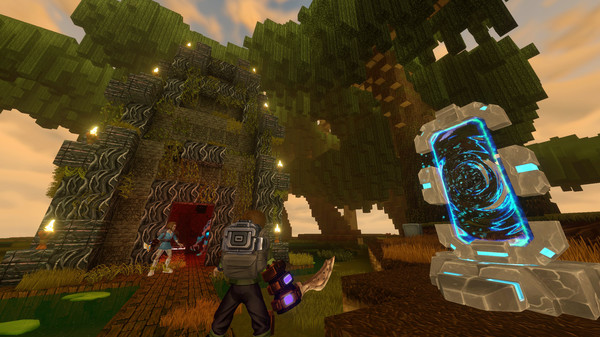 You may not be familiar with Playful Corp., but you’ll be familiar with their games. Many of their staff helped make Words with Friends the worldwide sensation it became. But when the team left to form Playful Corp., David Calkins (Chief Communications Officer) and the devs decided to take things in a different direction. First, there was the Rift launch title, Lucky’s Tale, and then this May the team released the F2P sandbox adventure, Creativerse. With more games on the horizon like Star Child and Super Lucky’s Tale, we sat down with David to discuss everything and anything in between.
Tell me about your experiences going from working on something as globally famous as Words With Friends, to a project completely different like Creativerse? What was the point where you decided you wanted to create this game?
Creativerse is our take on the sandbox genre that many of us have been in love with for several years. We’ve long been drawn to this kind of game and the power it has in turning the act of creativity into a joyous, delightful experience. 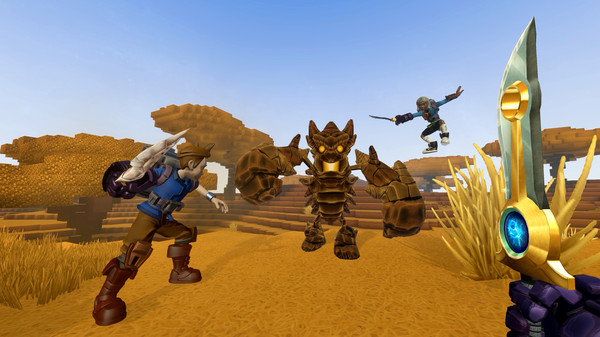 Interestingly enough, a lot of the same people who made Words With Friends work on Creativerse today. Making the leap from mobile to PC is not as difficult as you’d think to look at our company’s DNA. First, a lot of us have decades of experience making traditional PC and console games like Age of Empires and Halo Wars. But more importantly, we aspire to create joyful experiences that use the best of what’s available in technology today to enhance the experience. With Creativerse, we saw a big opportunity to explore fertile ground and push the genre forward with new, fresh ideas.

The thing we had the least experience with was actively working with a community of players to shape the game’s destiny, and that turned out to be the most important thing we did, helping us see crucial shifts in the direction necessary for becoming our ultimate version of the sandbox game. To this day we actively listen to our players’ feedback as we discuss our future roadmap.
Can you explain what sets Creativerse apart from other procedural sandbox games out there?
I’ll admit there are some striking similarities at first glance. But the vast majority of our players agree — judging by our “very positive” review score on Steam that we’ve maintained from the beginning — once you start playing the game, it stands on its own. At a high level, the game is fundamentally built for playing with friends and easily sharing your creations with the world. You don’t need to deal with the hassle of setting up your own server — you can just start playing instantly with anyone. And features like player-published adventures and blueprints with Steam Workshop integration make it easy to share the things you build with the entire community in a meaningful way. Take a look at the amazing things our players are submitting — anyone can easily re-create these in their world and make them their own. That ease of use and accessibility is something we’ve endeavored to achieve with every aspect of the game, making the experience appealing to casual players while still offering plenty of variety and advanced customization for veterans of the genre. 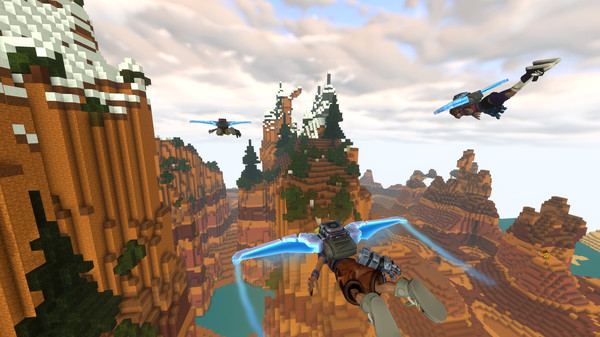 Free to play games nowadays have sort of a murky reputation. Many games are doing it right, but it’s a system that can be taken advantage of with intrusive microtransactions and walling off content until someone does spend real money. With that in mind, why did you feel Creativerse was best free-to-play?
Creating and sharing is essentially ingrained in our DNA…just look at any social media site. The life-force of sandbox games are large communities building amazing things, continually inspiring each other and new players alike. We also know from creating Words With Friends how important the network effect is on spreading the word and attracting new players. So for us, the most important thing was removing as many barriers to entry as possible to give that community a chance to grow, and that included making the game free. In terms of monetizing the game, our goal is to keep the essential, core experience free while reserving things like bonus content and extra customization as paid options. As you say, many games are doing it right, and we believe our track record shows we’re in that group as well.
At first glance, many players will look at this and see a “Minecraft-clone.” What can you say to those players to convince them it’s not and draw them into the Creati…er…verse?
The simple answer is just to give it a try — it’s free! Or if you’re strapped for time, watch a video of it on YouTube. If you’re a fan of the genre, chances are you’ll find something to like. I’ve already mentioned some of the bigger differences but there is a multitude of smaller refinements all over the place. Some of them make the traditional sandbox game much more convenient and easy to use, others add a lot of functionality and customization options you may not have experienced before. 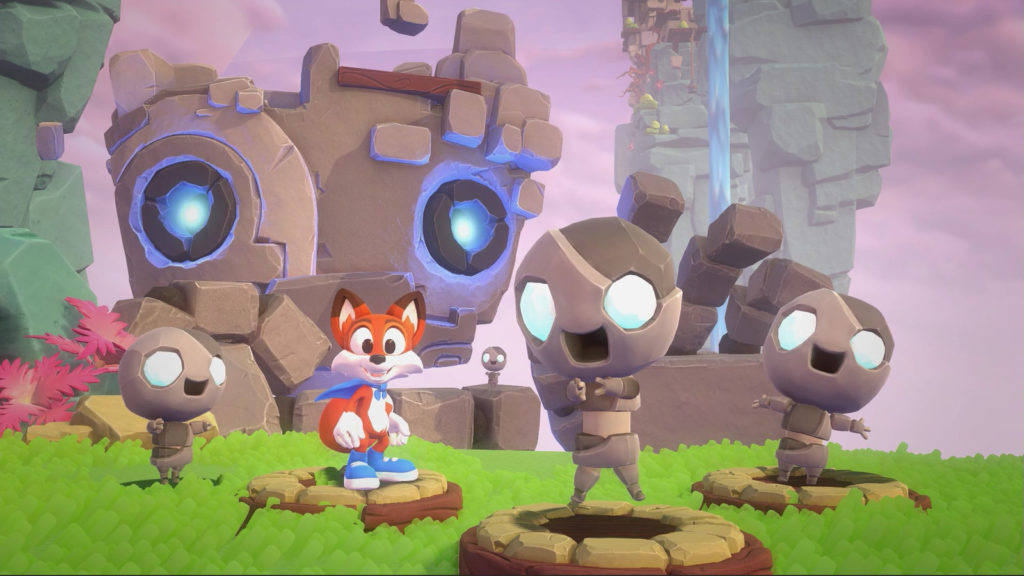 Switching gears, Playful has also been busy creating VR experiences like Lucky’s Tale. Now Lucky’s Tale is coming to console with Super Lucky’s Tale. Was that always the goal, and what was the process behind taking this VR experience and translating it to a regular screen?
While we are huge advocates of VR, we also always wanted to introduce Lucky to the biggest audience possible. So when presented the opportunity to work with Microsoft, we jumped at the chance. We think there’s a big appetite for games like this that capture the nostalgia of classic platformers wrapped in a modern, refined presentation that takes advantage of today’s hardware.
Here’s the interesting thing: a big challenge with the first Lucky’s Tale was ensuring the experience was comfortable in VR. We ended up learning a lot of tricks to reduce things like motion sickness and disorientation. Turns out all of that translates perfectly to a really compelling flat screen experience. It hits a sweet spot that allows us to make it appealing to people new to the genre while also letting us add plenty of variety and challenge for more experienced players. The controls are simple and smooth. While you can move the camera, you never need to. And playing the game in 4K at 60 frames a second just feels so good. On top of that foundation, we’re building what we call a “playground platformer”, which doesn’t limit itself to one monotonous play style but adds all kinds of delightful moments and level and design variety in a world filled with charming, fun characters. We think a lot of people are going to love this game and we can’t wait to see the world’s reaction when it finally launches. 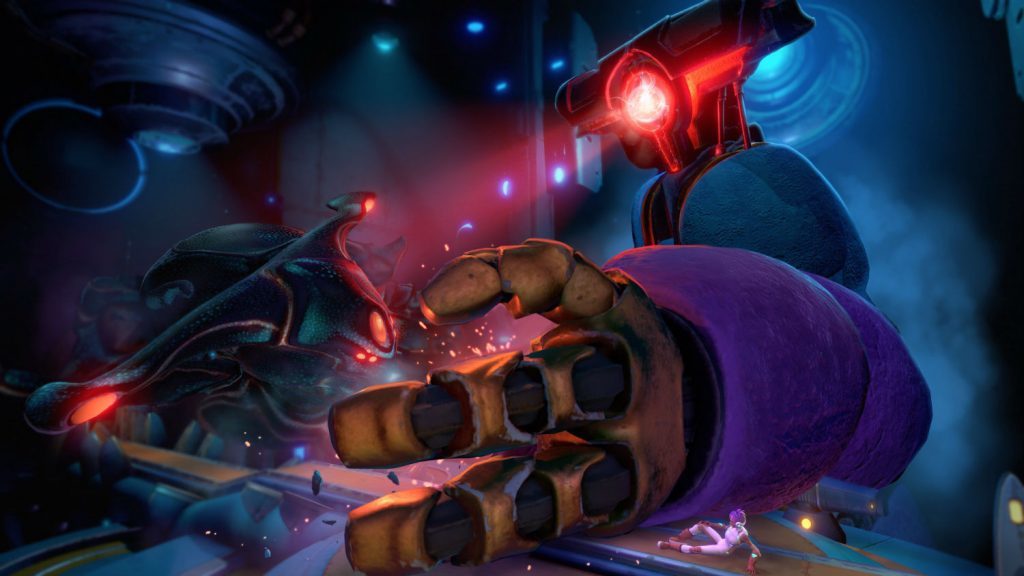 Star Child, probably the most interesting game I saw the least of during E3. Can you explain briefly what Star Child is?
Star Child, which we are developing in partnership with GameTrust and Sony, is what we like to call a “cinematic platformer”, a smaller sub genre that started with games like Flashback and Prince of Persia and, recently, Inside, which was hugely influential for us. The challenge with talking about Star Child is that its story and characters are purposefully enshrouded in mystery, as discovery and surprise are a big part of the game’s impact. We’re also still fairly early into the game’s development, so I think it’s best if I leave it at that for now, but be sure to follow the game on Twitter or Facebook to keep up with the latest news.
Tags: creativerse, lucky's tale, playful corp, star child
Previous ArticleRetro City Rampage is now out on Nintendo SwitchNext ArticleNeuroVoider coming to Nintendo Switch September 7th