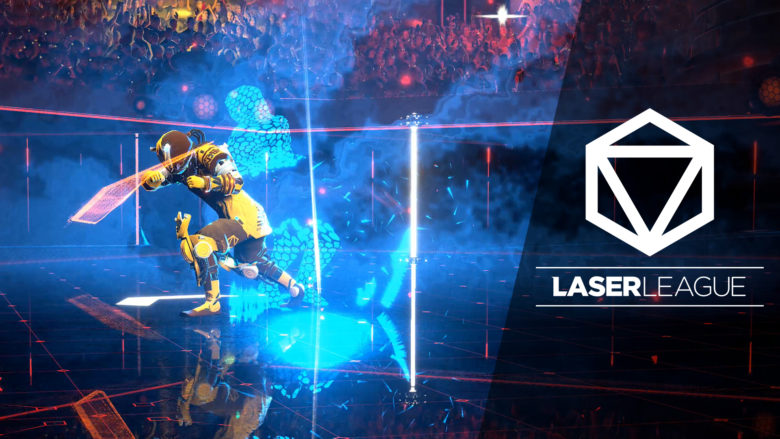 Tomorrow, May 10, Laser League will launch. For indie studio Roll7, it’s a scary prospect: the first game with online multiplayer, first game hitting three platforms at once, and their first game built in Unreal. But, after 5 years in development and support from publisher 505 Games, the fear is unfounded: this stylishly futuristic take on arena combat is ridiculously good fun.

I’d been invited to a basement lair beneath the streets of London to meet with John Ribbins, creative director and co-founder of Roll7. As we take up residence in a long meeting room, I can hear cries and cheers through the walls of a close-fought game building to its peak. A mixture of press, developers, and some of the best Laser League players in the country are battling in the demo room next door and, from the sound of things the match is getting intense.

To hear Ribbins describe it, Laser League was a journey of discovery, traveled from Galaxian via Birmingham, as the team felt their way to the toy at the center. In that time they’ve worked remotely yet held it together, found a publisher and even switched game engine. And yet, the game hitting Steam, Xbox One and PS4 is the same one they wrote down on paper all those years ago.

The original idea, so Ribbins told me as he leaned back in his chair, was what he called ‘competitive Galaxian.’ A multiplayer bullet hell. And it wasn’t that fun. Unfazed, they tweaked it so that the ships could be flown anywhere in the arena. And it still wasn’t that fun. Then they added turrets you could turn on, asteroids you could hide behind, and power-ups you could collect – including a laser that would cut the arena in half. And that last bit triggered a discovery. 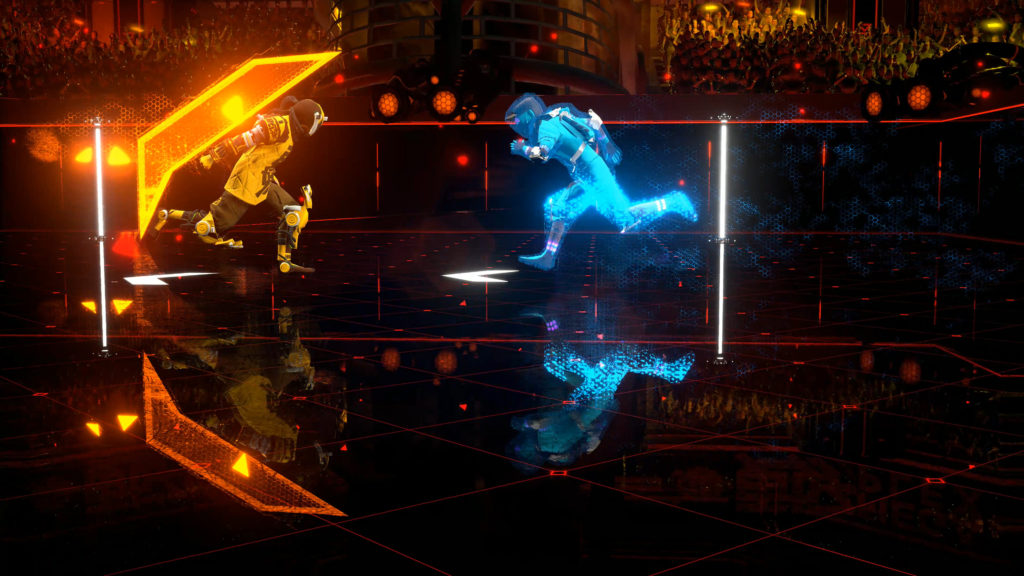 “Tom [Hegarty, co-founder] and I were playing it and were like ‘They’re the best bit. That’s the most fun. Hate the turrets, they’re fucking annoying. Let’s just take everything out and spawn loads of lasers and see who can survive the longest.’” After a few rounds, they knew they were on to something. Laser League, or at least the precursor to it, was born.

A short time later in 2012-2013, and in the unlikely surroundings of a grey and damp Birmingham train station, the game came to life. “Our train on the way back was delayed by about 3 hours, and so we … played around with the very first prototype of Laser League while we were waiting for this train. And that was literally made using DirectX draw calls, so it drew pixels on the screen, and the lasers were just lines in one of two colors.”

Roll7 went on to develop OlliOlli and Not A Hero, but would occasionally share the Laser League prototypes on the events circuit at Multiplay, Insomnia, PAX and E3. “It was called Cosmic Ultra Neon Tactics at that point because we were immature enough to think it would be funny to make a game the press couldn’t abbreviate the name of.”

Even so, people kept asking if they’d added any more to the prototype as the months and years went by, which is unusual. Eventually, the studio decided to ask themselves a tough question – stick with the pixel art and local multiplayer, or push for 3D and take it online? That early enthusiasm encouraged Roll7 to make the pitch and Go Big.

The Jump and Again

At the end of 2015 Roll7 decided to move to 3D, and started talking to 505 Games about publishing. After sharing the 2D demo during Paris Games Week in October, two big concerns popped up, the first being would the game even work in 3D? 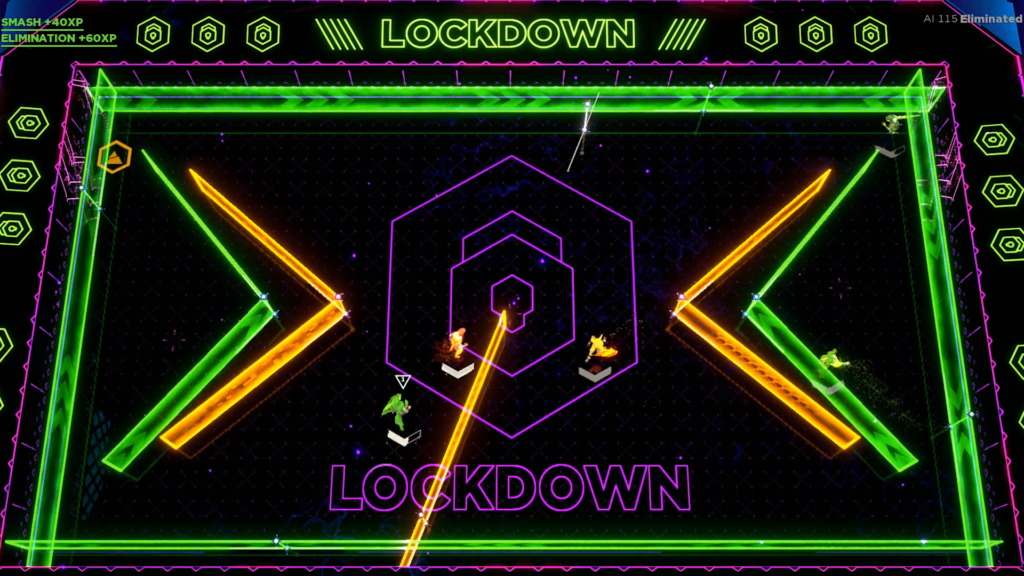 The debate was settled by using a small prototyping firm called Knights of Unity to test the theory out. “We sent them a really small design doc, and they built it in two weeks and sent it back. And we were like ‘That works!’ It’s still playable and readable.”

Moving to 3D also brought in some crucial shifts in the design approach. “That was the point where we stopped it being random and built a spawn pattern where it had a set order where the lasers appeared. It was when we started to realize that random is really awful in this game, and it was way better when you can have a strategy for which [lasers] you have to take.”

Releasing on PC, Xbox, and PS4 all on the same day, having never tried this out on any kind of scale. That’s quite a terrifying prospect.

Work continued in Unity until mid-2016, when the studio made a further jump to the Unreal game engine. After struggling to get prototypes working with the Photon networking package, the advice was almost unanimous. “It wasn’t that we knew anything about this and, if anything, Unreal is a very scary engine to use because pretty much everyone on the team has come from a Unity or straight C++ background.”

“But the conversation we had when we showed people the game was ‘You’ll never get this playing good in Unity, and you’ll struggle to get it playing well on 3 platforms in Unity.’ When we pitched it, we pitched it to a fair number of publishers, and they were like ‘What engine are you using?’ and we replied ‘Unity’, and they were *deep intake of breath* ‘Really? For online multiplayer?’”

Because of that repeated iteration loop, Laser League went into Early Access in a fairly polished state. As Ribbins said, most of the discovery work was done, and it was now down to testing systems. “We weren’t ‘Can you tell us where the toy os, where the fun bit is?’ because we kind know what this is. The biggest thing we were doing, which we’ve never done before, is online multiplayer”

“From our point of view, Early access was a godsend, because we were very concerned about releasing on PC, Xbox and PS4 all on the same day, having never tried this out on any kind of scale. That’s quite a terrifying prospect. For us, Early Access was an opportunity to get hundreds of people playing at the same time. Does anything fall over? Is everything OK?” 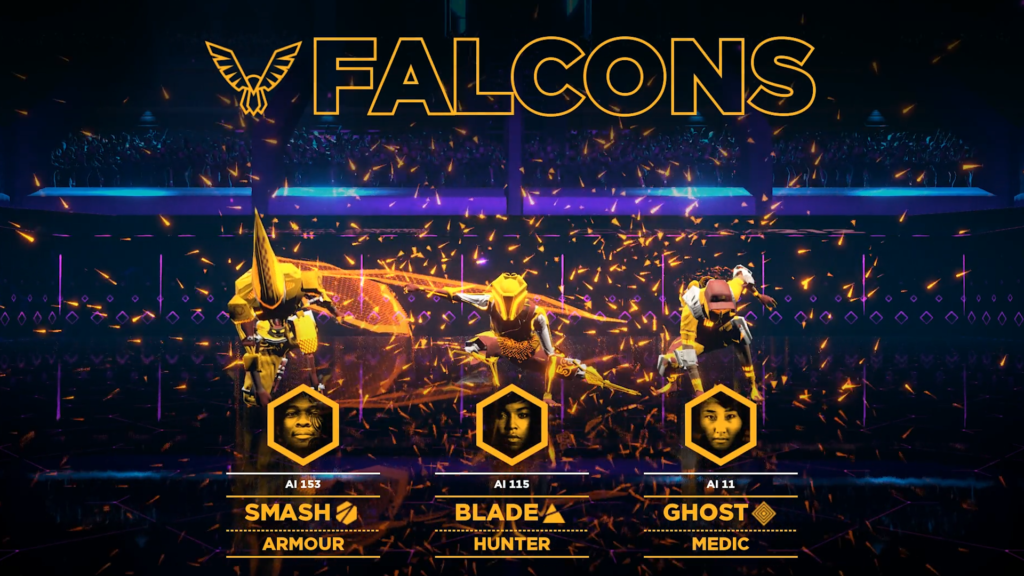 The team even managed to hold a launch party at Loading Bar in Dalston, North London, where two of the best Laser League players in the UK couldn’t get in because they were underage. Roll7 made it up to them by inviting them down for press day, giving them exclusive access to some new arenas and content before anyone else, and beating anyone else who dared pick up a controller.

Even so, Ribbins takes it as a compliment. In the short time since beta, some players have notched up hundreds of hours played and become incredibly skilled. That dedication in itself is some significant kudos to what the studio managed to build.

Beyond launch, Roll7 has plans for Laser League, though much depends on the success of the game. There’s the possibility of more arenas (which will always be free, Ribbins confirmed), additional game modes, and possibly new classes. Any paid DLC will focus on aesthetic content only, as the studio feels strongly about having a flat progression system – you do well because you’re skilled, not because you’ve dropped cash on a spangly kit.

There’s also a desire to improve the experience with small touches to matchmaking, like enabling two players on a single PC to join together, or for players to be able to join in-progress matches if someone else quits. There’s also discussion about weekly events, community events, and even season play. 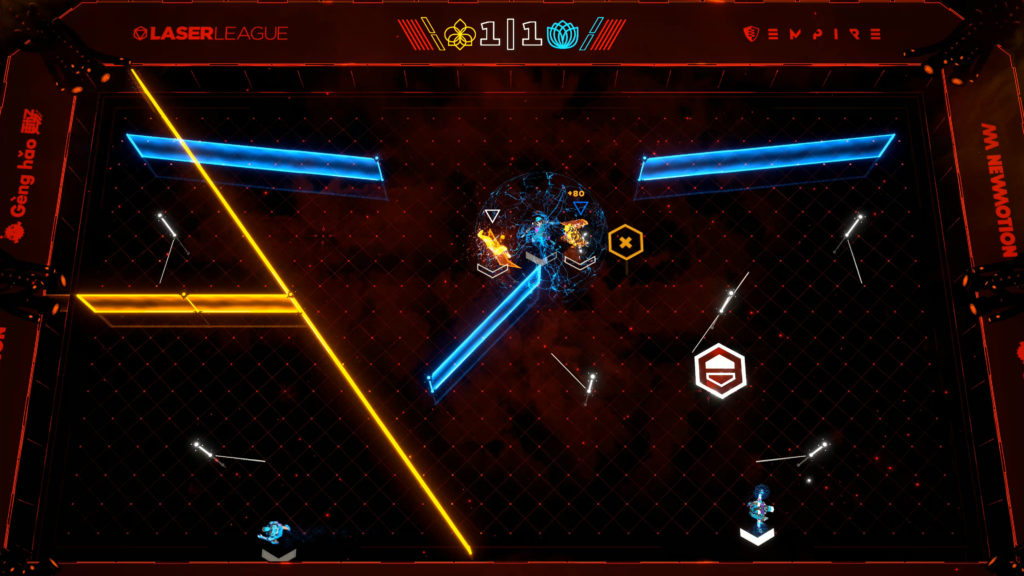 But, as we wrap up, I get a feel for the sense of pride John Ribbins has about the game he and his colleagues nurtured and built over the last 5 years. I asked him if there was anything he had to leave out – anything that got cut in order to make the deadline. His answer was surprising.

“I still have the page from my notepad that we wrote during Paris Games Week. ‘It should have massive stadiums with huge crowds and be really neon. You should be able to shoulder barge people and smash them into the arena.’ Literally the page of stuff that we wrote drunkenly about what the game would be, and the amazing version that we’d make, we did all of that in what you’ve played earlier.”

And amazingly neon it is. Laser League comes out tomorrow, May 10, on PC (Steam), Xbox and PS4.

Written by
Gareth Harmer
From flight sims to fireballs, in the most dapper way possible.
Previous ArticleDragon’s Crown Pro on the PS4 ReviewNext ArticleSubaeria Review – Perpetuating Robot on Robot Violence 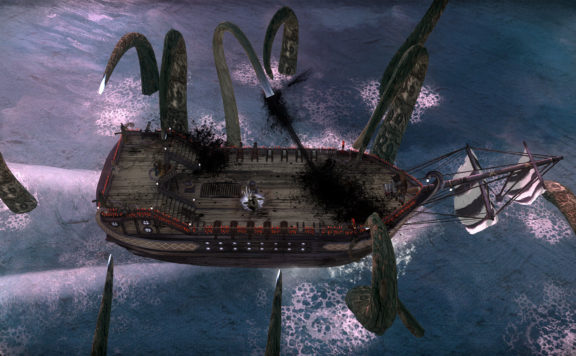 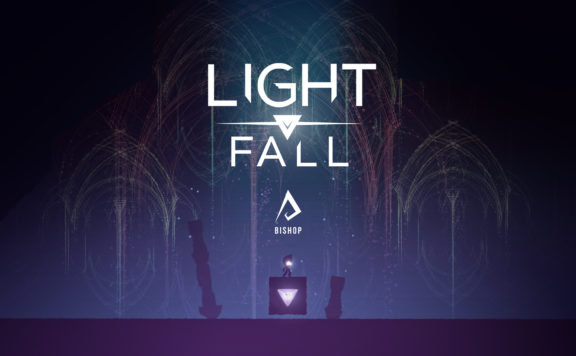 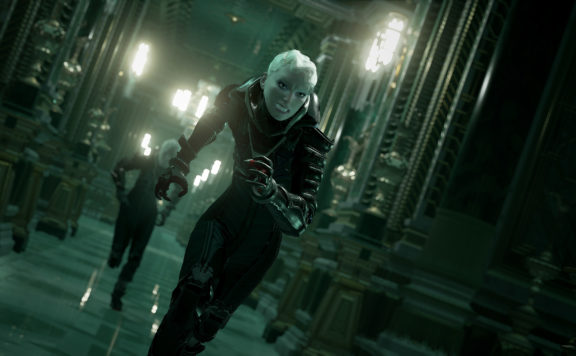