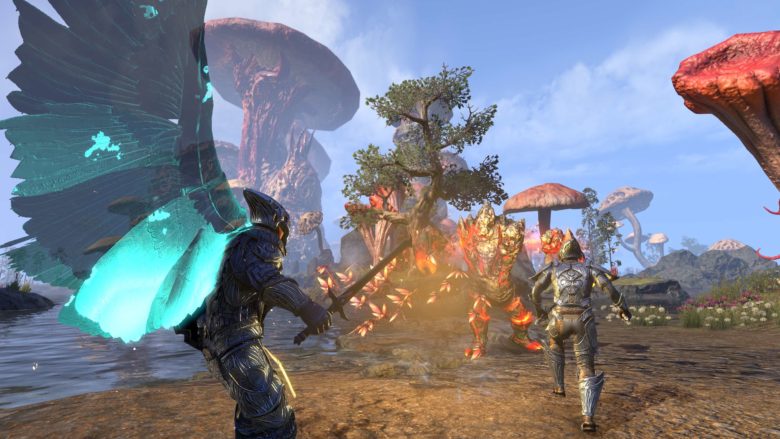 Last week we were lucky enough to be invited to Zenimax Online Studios for an sneak peek at Elder Scrolls Online: Morrowind. The forthcoming “Chapter” brings a new class, a new 4v4v4 PVP mode, the entire island of Vvardenfell from TES III, and tons more content to the MMO. We’ve got loads of coverage on MMORPG.com today, so be sure to take a look. But we also got to sit down with Game Director Matt Firor to ask him tons of questions about Morrowind, ESO, and all that comes with both.

On the New Class – the Warden

GameSpace: First, tell me – an anxious player of the new Warden class – why the Bear pet is restricted to one class and only as an Ultimate skill at level 12?

Matt Firor: Well, just like everything else that’s a little bit progression gate (we don’t let you PVP before level 10 with the Battlegrounds and Cyrodiil) – we want you to figure out the class itself, play with all three of the skill lines even, before you decide to take on this Bear as your pet in the Animal Companion line. But we’ll playtest that and see how it goes.

GS: Is there a quest that involves the Bear, or something lore-based for the Warden specifically?

MF: No, we didn’t do any class specific quests for the Warden, like all other skills, it’s just something you earn naturally through leveling. 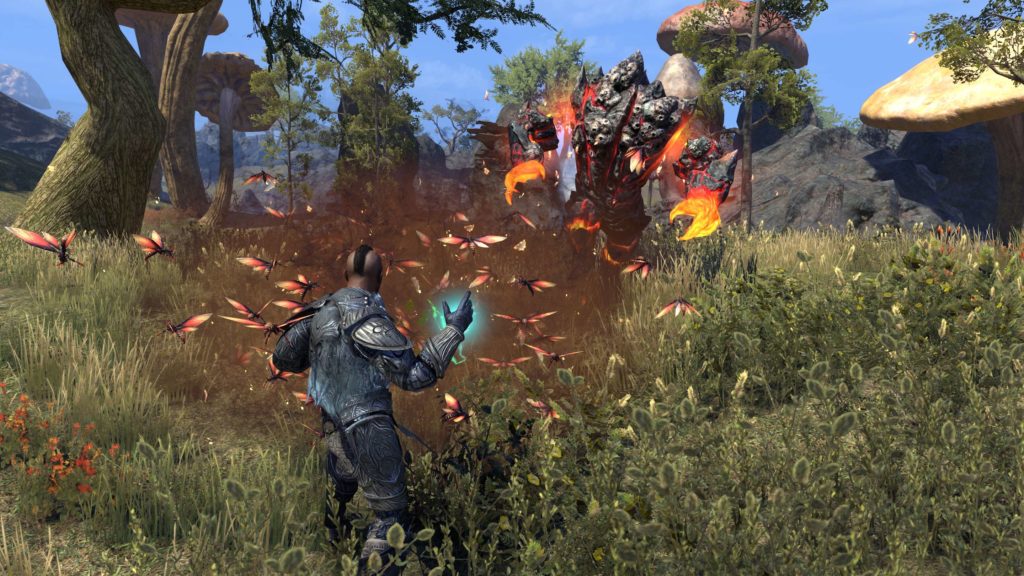 On the ESO Plus Membership

GS: Right to a hard ball question – now that you’re taking away a “free DLC” from the ESO Plus folks, by in essence making Chapters a once a year purchase, are there any plans to add additional things to the Plus membership to offset this?

MF: Yeah, we’re always going to add ESO Plus stuff. We’re not exactly sure when or what yet, but we have tons of idea floating around all the time. For instance, you get more Housing items that are place-able in your homes with a Plus membership.  We definitely want to make sure Plus remains a good value, but I also think it’s worth reminding folks that they get $15 worth of Crowns (1500) every month too, on top of all the other perks. Plus the DLC, of which there are two more coming this year after Morrowind.

GS: Plus Homestead, I mean even though it was free for everyone, the free crowns and double placement space is great for fans of that system.

MF: Yeah, but you see what I’m saying. We’re going to keep doing everything we can to make sure it has value. We don’t want Plus members to look at a Chapter every year as us taking something away from them. 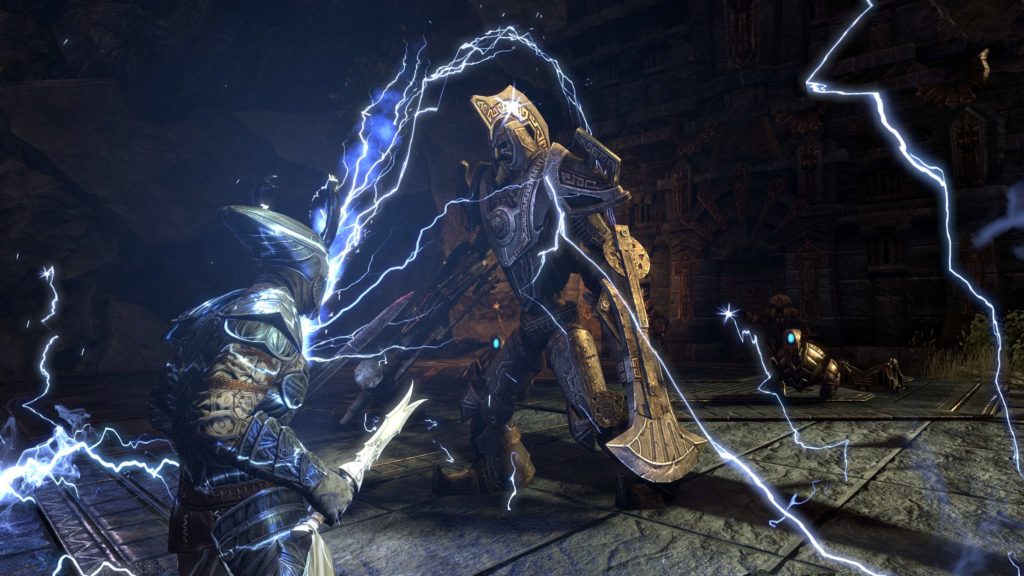 On the game’s longevity

GS: Pivoting a bit to something long term. ESO is now three years old, and it still looks great, especially on the PS4 Pro, or Ultra settings on PC – but eventually it’s going to get a dated feel visually. Do you have any idea on how you’re going to keep it fresh?

MF: Well, the console folks being 2/3 of our audience hampers further big upgrades, unless of course we keep getting more upgrades to console hardware as well like the PS4 Pro. But on the other hand, we can do stuff like newer DX versions, better shaders, and stuff like that on the PC without worry. We’ll continue doing that stuff, but we’re not likely going to do a major overhaul or anything like that.

GS: Speaking of the consoles, when you’re designing content how much worry is there between making something playable by both console players and PC players?

MF: We just play it. Around the office, in test groups…

GS: Do you have people that play specifically on a gamepad, for instance?

MF: I actually prefer to play these days on a gamepad on PC. I never used to, but I like it now a lot better than playing with mouse and keyboard. It’s just more comfortable for me. 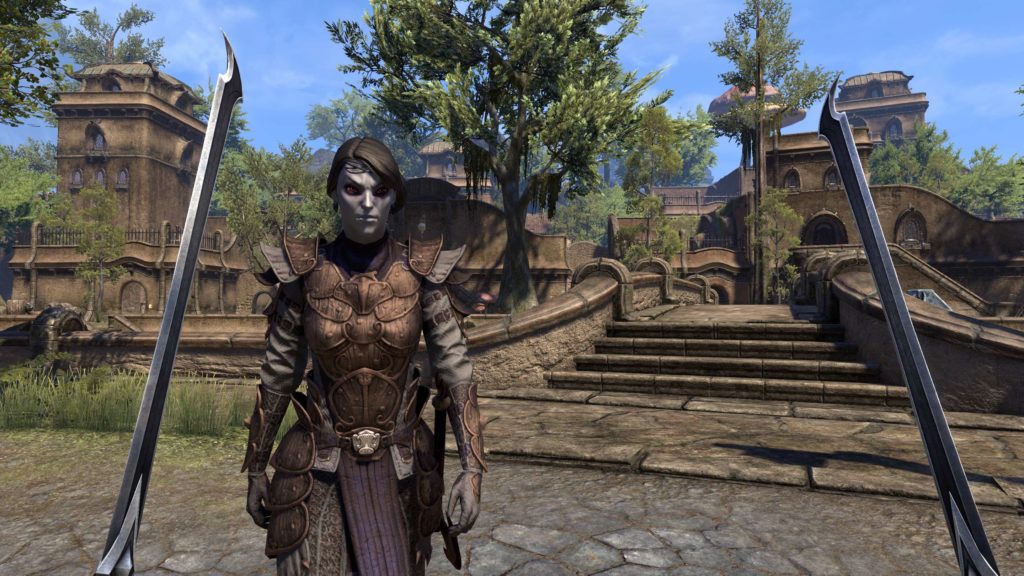 GS: I love that you have positional voice available in the console versions. It’s always awesome to stumble upon good RP folks on PS4. Have you ever thought about adding it to the PC?

MF: Well on PC, everyone has their own solution already. I think even if we added it in-game, most people would just rely on their own system so it’s not really something I think as worth putting time into. You really like voice in Dungeons, PVP, and Trials. But those people who take them seriously or even half-way, have their own service.

On Vvardenfell’s Geography and Endgame

GS: Moving back to Vvardenfell. It’s an island, filled with lots of little pockets of water. As a game that doesn’t have underwater swimming, does this mean we’ll be doing a lot of surface swimming, or will most of those shallows be walkable?

MF: You’d want to ask the other guys, but I’m about 90% sure that most of those swampy or coastal areas’ water is walkable. No random dismounting, or slowing down your travel – we know how annoying that can be too.

GS: That’s great. Here’s another general ESO question now – with all of the game starting to feel like “end game” because the levels don’t matter much anymore with One Tamriel, do you have a fear that there’s not a sense of progression during the 1-50 experience?

MF: Me personally, no. I mean, I play FIFA every year, and while there’s no real progression there – I’m winning, I’m losing, I’m having fun. We take that same design with ESO. We want you to feel rewarded, to feel like you’re getting more powerful, but we don’t want to do that at the cost of keeping you separated from other players. I think the tradeoff of levels feeling a little less important is more than worth the freedom of exploration and playing with the One Tamriel system. I think people miss going back to early zones and beating up stuff that was once harder for you, but again I think losing that isn’t so bad for what ditching it offers in a multiplayer game with this much freedom of choice. 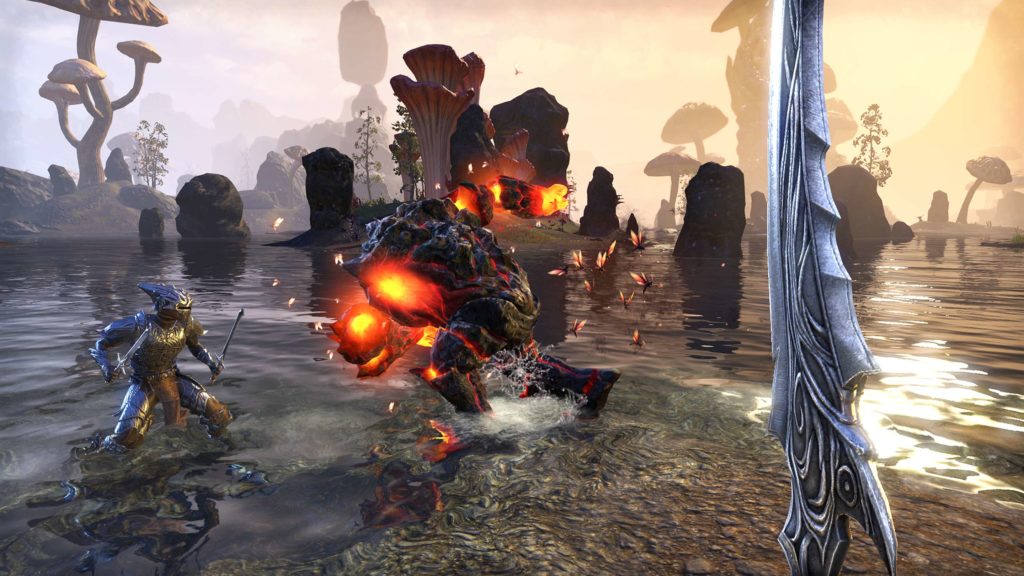 GS: The Morag Tong feature really heavily here in Morrowind – they’re this elite assassing guild that’s basically there to enforce political stuff within Morowind. I assume they’re not a joinable guild like Fighters or Mages? Any thoughts on if we’ll ever be able to?

MF: Yeah, they’re not something players can join, and the Lore is very clear on that. They’re an extremely select group of Dunmer, and Dunmer only. As cool as it would be, it’s just not possible to do in this game. They only kill specific politically sanction targets, whereas the Dark Brotherhood will kill pretty much anyone.

GS: My colleagues want me to ask this one – you can’t ride the bear you get as a Warden, right?

MF: Correct. You can ride a bear, you can have a bear cub pet, but you can’t ride the summoned bear. You can wear a bear mask. So feel free to get all beared up.

GS: Is the Champion Point cap raising in Morrowind?

MF: No, not this time. We just raised it a bit, and we will again I’m sure, just not with Morrowind. 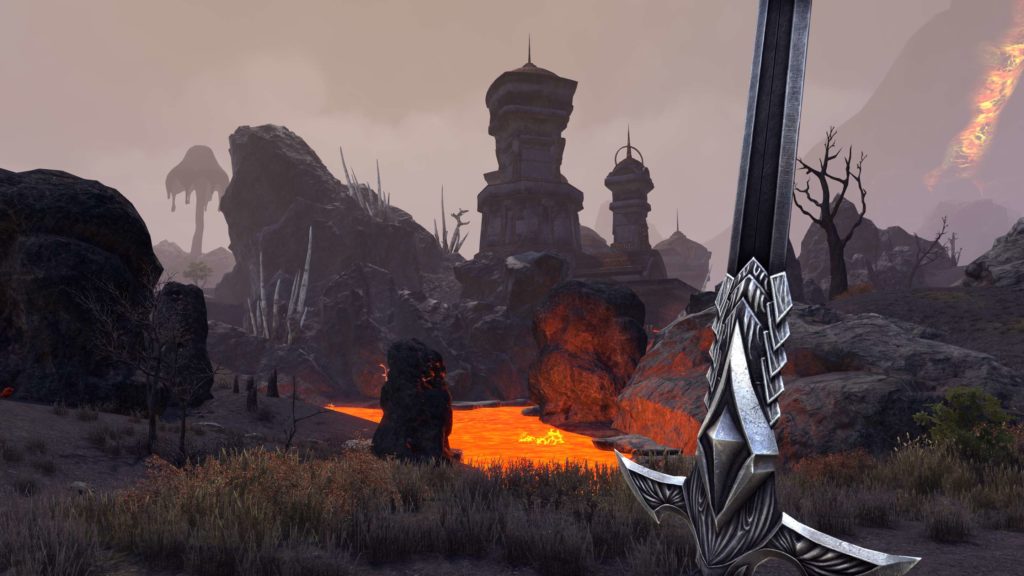 GS: You mentioned when you gave your presentation to us press types, that a lot of Morrowind’s story and questing was inspired by what you learned on Orsinium. Which is great, it’s my own favorite DLC so far. The content flow was so vastly different from the base.  It felt more natural than the questing in the base game.

MF: We just did things that way when we were building the base game. The Imperial City, Orsinium, we learned a lot, played with new ways to do things. Coldharbour also had some of that too, since it was the last zone we built before launch.

GS: Is there something in Morrowind that sticks out as a summation of these lessons?

MF: I know it sounds weird, but the new tutorial for Morrowind and new characters is great. It’s not a “Hallway of Content” like the prison; instead it feels more like the real game. You’re in the world, not separate from it. I’m really proud of what the team’s done for Morrowind. It’s going to hook people, I’m certain of it.

GS: Thanks a lot, Matt. Really appreciate the time, and can’t wait to get my bear.

Written by
William Murphy
The Greatest Excite Bike Player of All Time (GEBPAT for short) and Editor in Chief of GameSpace.com and MMORPG.com.
Previous ArticlePillars of Eternity 2 Crosses the $3 Million Mark on CrowdfundingNext ArticleTroll and I is coming to Nintendo Switch this Spring

Star Citizen Has Flown Away With $350 million In Crowdfunding Cash
March 16, 2021