Back in May 2021, AOC announced an intention to get into the PC peripheral market, launching a range of budget and high-end gaming peripherals to take on all comers. The GK500 is, like the GM500 we reviewed recently, possibly the most difficult shot for AOC to make. On its first try, the GK500 aims to be a mid-range balance between price, construction, aesthetics, and performance. Hitting the target on all of these can score some serious market share and after some time spent typing our way to victory, we’re glad to say that this mechanical gaming keyboard is staying atop the desktop. Here’s why.

Prising the GK500 from its cardboard box is a relatively unceremonious affair. As you’d expect from a mid-range keyboard that comes in at around $49.99 / €74,90 / £55, AOC hasn’t wasted too much on unnecessary pomp and presentation. Instead, this functional box opens up to a well protected full-size keyboard and gives gamers a first look at their new desktop weapon.

The AOC GK500 immediately looks and feels the part. This full-size mechanical keyboard comes topped with what appear to be solid injection molded keycaps, each sporting laser etched lettering and a rough tactile finish. The metal base plate is black with silver trim and provides a strong core to a board that has absolutely no intention of flexing when pushed. The overall layout and spacing of keys is well considered. Typing feels natural and I never found myself wrong fingered when getting into battle or a spreadsheet.

Ever the middle of the road, the GK500 matches the GM500 in trying to appeal to all potential owners. While this doesn’t extend to introducing an ambidextrous qwerty option, if that is even possible, it does manage a premium finish that is still understated. The AGK700, the more premium AGON branded end of the series, includes extra add ons and desirable Cherry MX branded switches. In comparison, this streamlined set of keys sticks to classic lines and a minimalist logo just above the cursor keys. The red and blue variants of the GK500 use Outemu branded switches, providing a linear and tactile option with a lower price point, while the brushed aluminum top plate hides a plastic base underneath. The result is a keyboard that looks and feels far more premium than it has any right to, and that’s one of the GK500’s big selling points.

When getting hands-on, first impressions of this keyboard throws up a few unexpected results. While the layout and overall design of the physical components don’t vary much from established norms, the plastic tops to these mechanical switches have an unexpectedly rough finish. This seems to be a deliberate move to give AOC GK500 a little more tactile presence under the finger if things get a little hot and sweaty, and I especially like that extra presence that this gives each key. 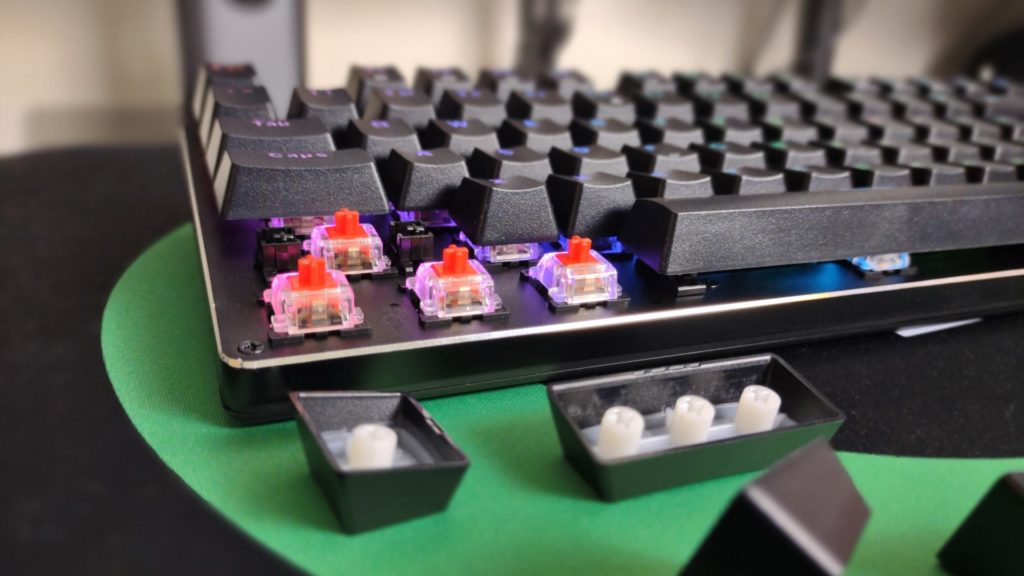 Beneath the keycaps, there are multiple switch options. Outemu Red and Outemu Blue switches are on offer, providing various levels of feedback. The red option we got to try came with the expected linear motion and generally felt good under finger. Across the board, they seemed consistent and ultimately very responsive. Put up against the Cherry MX equivalents, they do appear to need a little more force to actuate and come loaded with slightly noisier internals that make the GK500 sound a little closer to a well-used set of Cherry MX linear switches. They also do occasionally feel like they bring a little more lateral movement to the table on some of the larger keys.

This is all, for the most part, the type of thing the GK500 audience isn’t going to notice. Mild wobbles and a barely noticeable difference in actuation force are the sorts of criticism that aficionados willing to lube up their own board and put out twice the price will catch. You will be unlikely to find a difference between this set of keys and the more expensive options in the middle of a furious firefight, and I’m more likely to be shouting expletives over the sound of my key mashing than worrying about these issues. Similarly, when pushed into Apex Legends or spamming heal in Guild Wars 2, the Outemu switches felt as fluid as any equivalent board when I tried a side-by-side comparison.

Beyond the very capable keys and reassuringly solid build quality, the GK500 marks itself as a compelling purchase with some very welcome, additions. The most obvious of these is the inclusion of a magnetic wrist rest. It’s entirely unnecessary for something branded as a gaming first keyboard and the magnetic attachment is entirely unexpected at this price range. The full key rollover and 25 key anti-ghosting tech means no inadvertent skill spamming and is a feature that might be difficult for middle-ranked players to even make full use of. Still, the inclusion is just one of the many extra value adds that make the GK500 a rather powerful contender for your cash.

While specifications and quality construction are important, AOC hasn’t given up on looks entirely. I love the understated brushed aluminum base and minimal branding, but plug in the GK500 and it starts to glow. Default details present a keyboard that comes in a simple shade of red, with light peering out through the laser-etched lettering and below the raised keycaps. The bundled AOC software tools, however, reveal a whole spectrum of options. The GK500 houses a fully-fledged array of individually programmable LED lights. A total of 104 independently illuminated keys can be set to their own color, alongside an array of breathing, pulsing, and rave-inducing rainbow options. It’s an almost bewildering level of custom color control that blows many equivalent competitors out of the water.

As if that isn’t enough, the board’s sole profile slot is also able to handle 5 macros, which can constitute recorded keystrokes that will let you spam your raid rotation and still avoid the head. Simply put, the AOC GK500 is everything I would expect from the AGK700 without the cost.

The GK500 makes a few compromises, keeping the USB cord always attached and sidestepping the very best switches for something almost as good, but there’s little I don’t like about the GK500. While I was not entirely convinced by the AOC GM500, I’ll be keeping the GK500 front and center as I dive into battle from now on. Do your desktop a favor and get one of these if you haven’t already made the mechanical jump. Check out the GK500 on the official website now. 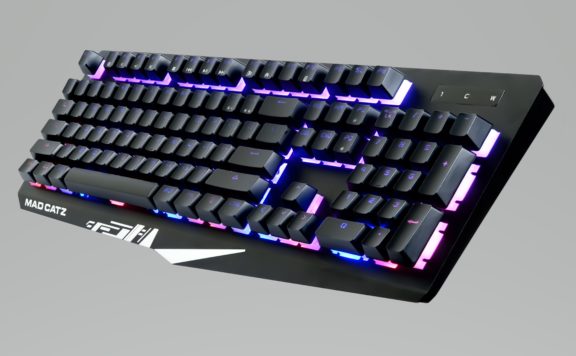 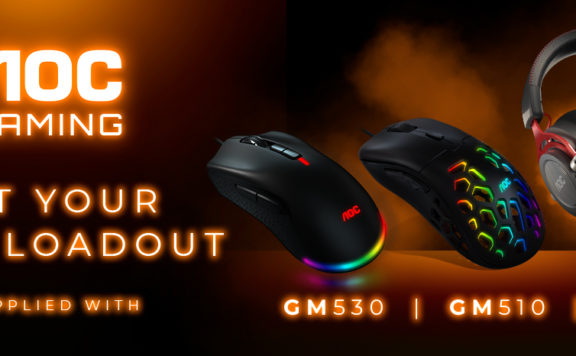 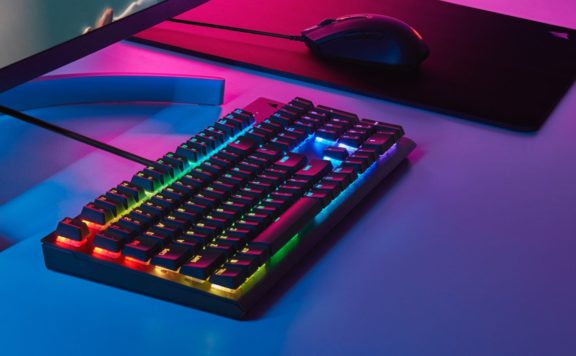 Three Factors to Consider When Looking for a Gaming Keyboard
February 24, 2022 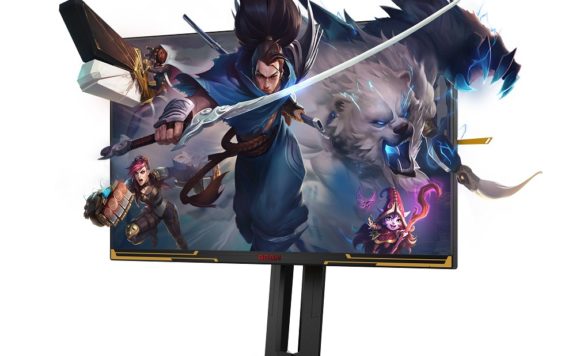 Back in May 2021, AOC announced an intention to get into the PC peripheral market, launching a range of budget and high-end gaming peripherals to take on all comers. The GK500 is, like the GM500 we reviewed recently, possibly the most diffi...
0
Average User Rating
0 votes
Have Your Say!
Your Rating: 0
Submit
Write A Review