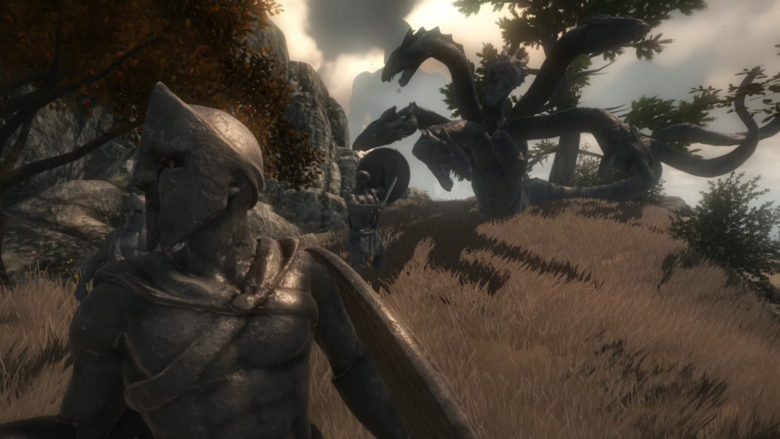 It is about now that you might be thinking about taking a trip to the sun-soaked beaches of the Mediterranean. Independent developer Zojoi is all set to invite you on a different sort of trip. Are you ready to face Argonus and the Gods of Stone as it launches later this year?

Developed by the same minds behind the recent release of Shadowgate, Argonus and the Gods of Stone is set to make land later this year. It marks a distinct shift in tone from Zojoi’s previous work where players inhabit a love letter to the iconic Ray Harryhausen fantasy films of yesteryear. Set in a world inspired by Greek mythology, players take the role of Argonus. This cartographer and historian finds himself stranded on an uninhabited island somewhere in the Aegean Sea. With the mighty ship Argo in ruins, the fate of the Argonauts uncertain, and no obvious sign of rescue, it is up to the player to guide Argonus and try to survive. A guardian goddess will assist the game’s protagonist on this adventure as players delve into a perilous story that threatens to unleash a terrible evil upon their world.

While Argonus and the Gods of Stone might be inspired by the early adventures of gods and monsters, the graphics here look far more modern. A beautifully rendered 3D greek island filled with some stunning looking monsters features in Argonus and the Gods of Stone. A fully narrated story, from the voice of Betsy Brantley, and an expansive soundtrack by Rich Douglas also adds to this modern mythological mystery.

If you are already on board this adventure, Zojoi will produce two versions of Argonus and the Gods of Stone. Alongside the Standard Edition, players can purchase a Special Edition that includes and walk-through audiobook, a separate copy of the game’s original score, and a digital compendium of the game’s concept art. Argonus and the Gods of Stone is due out later this year and you can find out more on the game’s official steam page.

Written by
Ed Orr
For those of you who I’ve not met yet, my name is Ed. After an early indoctrination into PC gaming, years adrift on the unwashed internet, running a successful guild, and testing video games, I turned my hand to writing about them. Now, you will find me squawking across a multitude of sites and even getting to play games now and then
Previous ArticleREVIEW: Sniper Elite V2 Remastered — PCNext ArticleOddworld: Soulstorm Trailer Returns To Odd