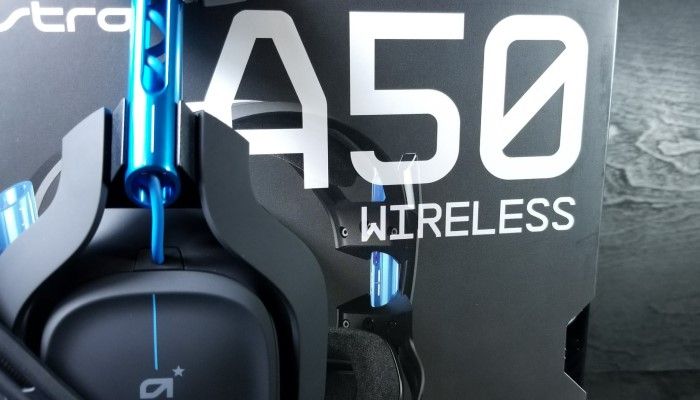 When we reviewed the Astro A50s on MMORPG last year, Chris Coke found them to be an expensive but worthy headset for anyone looking for an all-around piece of kit for their PC or PS4. When Astro said they’d like us to review the same model, but with some upgrades, this year on GameSpace, we jumped at the chance. Let’s be clear, these $299 headphones are not something us hobbyist game journalists can afford to shell out for at the drop of a hat. Ergo, these cans were provided to GameSpace for free for the sake of this review.

Now! Here are the specs…

Astro does a great job of making you feel like you purchased something “exquisite” due to the care they put into their packaging. Opening th A50s is like unearthing a relic that’s been expertly sealed and kept in a display box. When you open the slick packaging, you find the headset and all the accessories tucked on opposing sides of a shellcase. You’ll find the base station used to connect and charge the headset, the detachable boom mic, as well as a USB and optical cable for connecting to your PC or PS4.

The A50 does feature its own Mod Kit, sold separately, which can change the headband and earcups from soft phome to leather if you so desire, but it’s not really necessary. Either way, no one will mistake the A50 for your average set of plug and play headphones – the blue accents on matte and shiny black mix to make a slick look that’s not too “forced” gamer looking. I am surprised that there’s so much plastic in the build, given the pricetag, but it’s a nice blend of plastic and metal that means these should stand the test of time unless you toss them around and don’t take care of them by storing them on their charging stand.

So they look good, as you can see, but how do they sound?

For the audiophiles out there, the A50s bear 40mm neodymium drivers with a frequency range of 20-20000Hz. This is standard, but what makes the A50s stand out is how well tuned those drives are. You get a deep, resonant bass with finely tuned treble that makes sure the sound effects of gunfire in a game like Division 2 sounds realistic. And what’s more is that this tuning is right as it should be out of the box. While you can tweak things in the Astro software, I’m betting most of you won’t need or want to. What’s more is the excellent use of Dobly 7.1.

The use of 7.1 Surround Sound is better than most headsets I’ve heard, and it really comes in handy with games that utilize positional audio. I’ve been playing a lot of The Division 2, and this sort of feature makes it so you can easily tell what direction enemies are approaching from, how far off or behind you gunfire sounds, and if footsteps are coming up on you. This is how surround sound should work in games, and it’s the first time I’ve felt like I should always be wearing my headset because it increases the immersion from the soundscape.

I also can’t say enough how nice the flip to mute mic is. It’s a simple feature, and not one that’s only on Astros by any means, but the inclusion of it here instead of a hard to find or press button is much appreciated. The charging station is also a godsend, as it means there’s no cord you’ve got to manage and keep nearby to plug in every so often to keep the cans charged. Instead, this little slick base can go next to your tower, behind the monitor, or whatever. The only downside is that sometimes it can be hard to get the headphones to sit in the dock in the right way to actually charge them. It’s a small complaint, as some fiddling always gets it there, but it’s not as simple as inductive charging your phone on a mat, for instance.

All in all, the Astro A50s are one of the finest sets of headphones I’ve ever owned. They’re comfortable, the sound great, and their little features are simple but clever additions. The pricetag may set some people off (you could get an Xbox or a Switch for the same price), but if you’re in the market for a very excellent set of PC or console headphones, you need look no further than the A50s.

Written by
William Murphy
The Greatest Excite Bike Player of All Time (GEBPAT for short) and Editor in Chief of GameSpace.com and MMORPG.com.
Previous ArticleYakuza Kiwami 2 ReviewNext ArticleSteam High Five: May 3, 2019 Edition