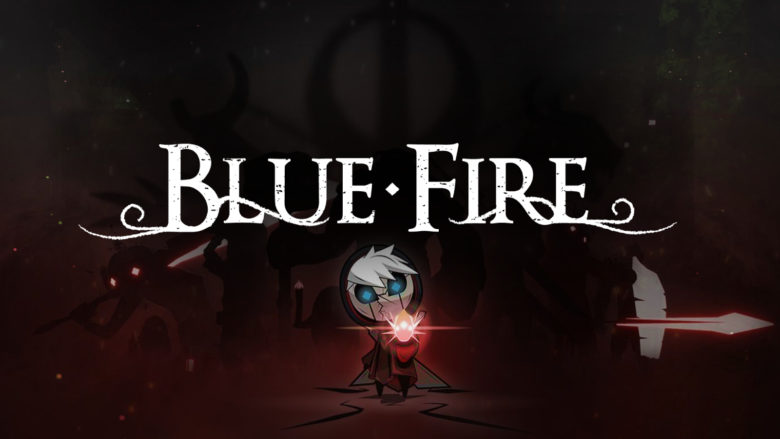 Blue Fire is a fast-paced action-adventure game that drops you into the fallen world of Penumbra. Don’t be fooled by the cute character designs, there’s a dark secret lying just beneath the surface. Graffiti Games was kind enough to let us sneak a peek at their demo for Blue Fire on Steam. So if you’re a fan of A Hat in Time and LoZ: The Wind Waker, settle in with Gamespace and your morning cup of coffee for our first impressions.

From the beginning of Blue Fire, you learn that you don’t know much about…well, anything. But, there’s a lot that can be gleaned from your surroundings. You find yourself alone in a strange lab in a dark castle, with a pulsating toxic substance that seems to have taken over the area. This world also seems to be cloaked in darkness and shadows, hence the name Penumbra. We’re clearly not in for a leisurely stroll through the gothic castle, so you take up your sword and move forward to get to the bottom of this insanity. 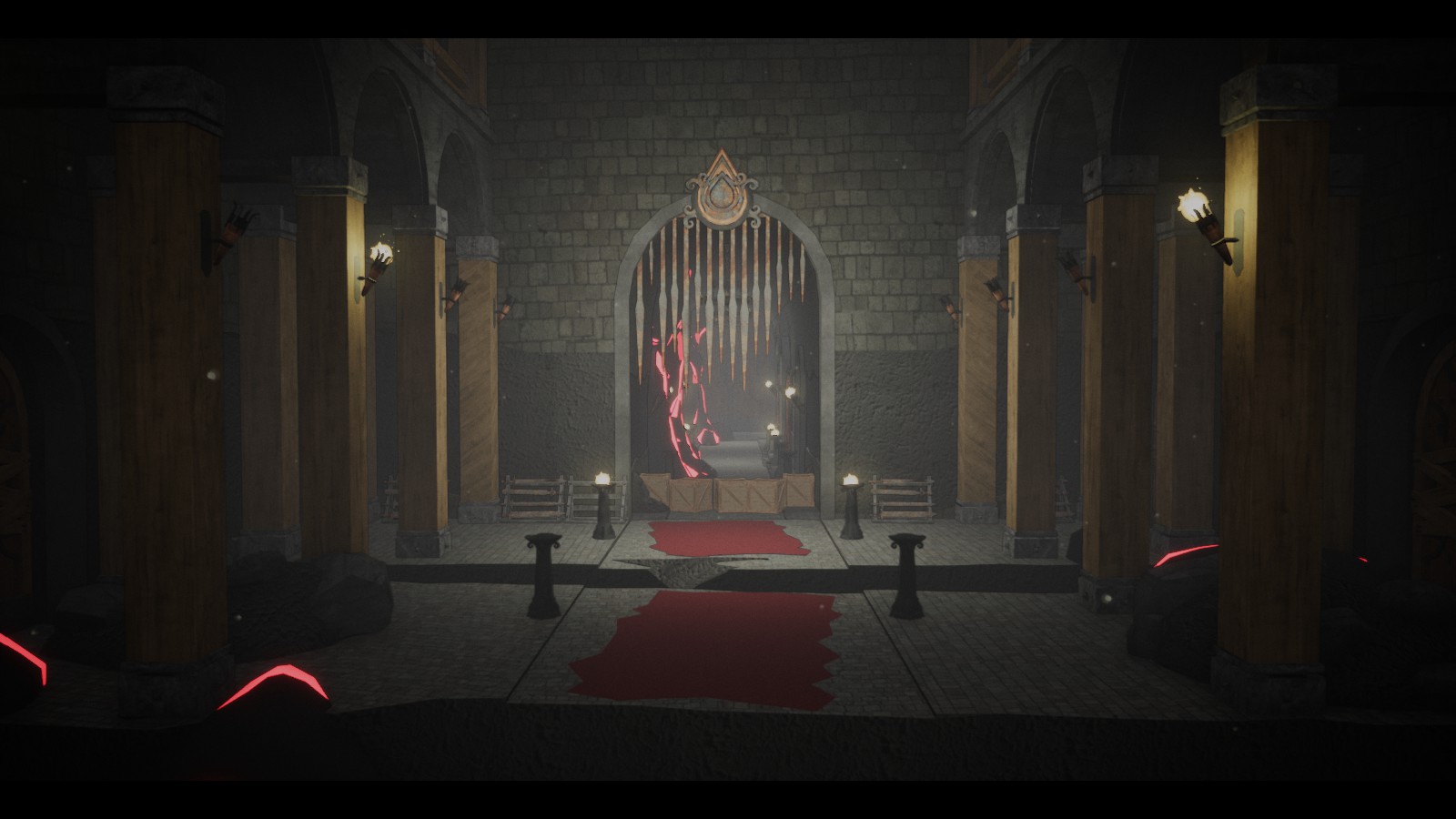 The toxic substance permeates throughout the entirety of the castle.

Though it isn’t advertised as a platformer, there is certainly a lot of platforming shenanigans and goodies to be found even at the start of Blue Fire. As the silent, but cute, Umbra you’ll traverse the realm of Penumbra to gather collectibles, scale impossible heights, and fight challenging enemies to progress forward and learn more about the world around you. The castle is easy enough to navigate, but you’ll find yourself backtracking more often than not to gather a few more resources. Some doors in the castle are locked and can only be opened after you have conquered a few more challenges.

The first thing you’ll have to get used to in Blue Fire is its movement because it’s very dependent on it. Jumping particularly has been given a fair bit of attention, because you can time your jumps exactly to go just a bit farther or fall short immediately to drop down on a risky platform. There are plenty of platforming challenges and timed puzzles that will help you practice this skill, so if you don’t think you’ve got it at first, after the tenth time-you will. It’s frustrating at first, but oh-so-satisfying once you get the hang of it. 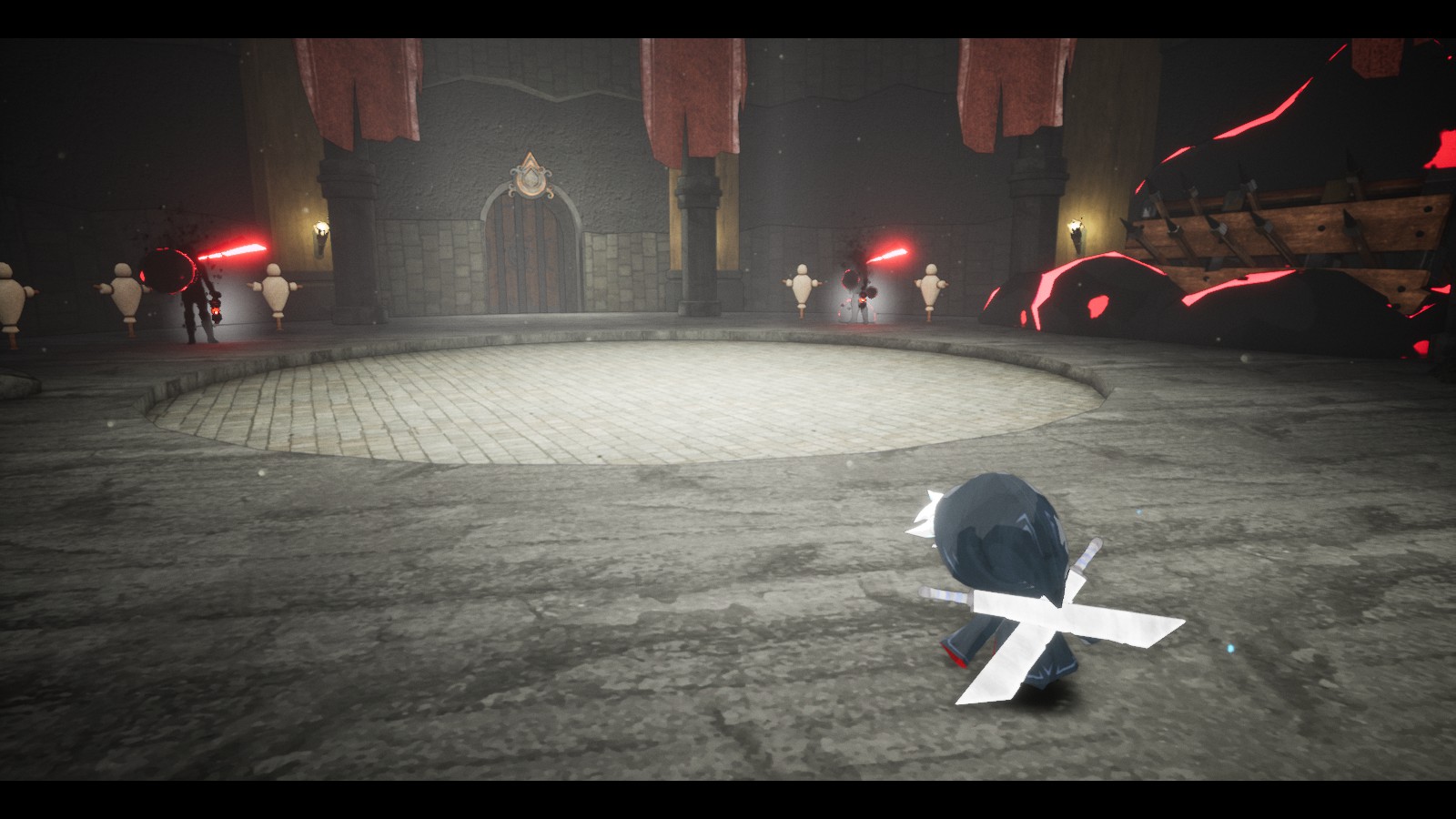 The warrior of light and darkness prepares for a boss fight.

Combat takes a little getting used to as well, and this is in part still because of how you control Umbra’s movement. In order to succeed in a fight, you need to be quick on your feet, often dashing in for drive-by strikes at your enemies. Standing in place is a certain death sentence. At first, I thought I could just rush into combat and deliver a combo to the little black shadow creatures. However, I was quickly humbled by their quick-moving forms and hard hits.

You have three health ticks that when depleted send you back to the last checkpoint. Luckily, there are orbs of “blue fire” (roll credits) that you can pick up along the way to use to restore your health during battle. These act as consumable health potions that can save your shadowy butt during the last stretch of a boss fight or an intimidating encounter with a new creature. 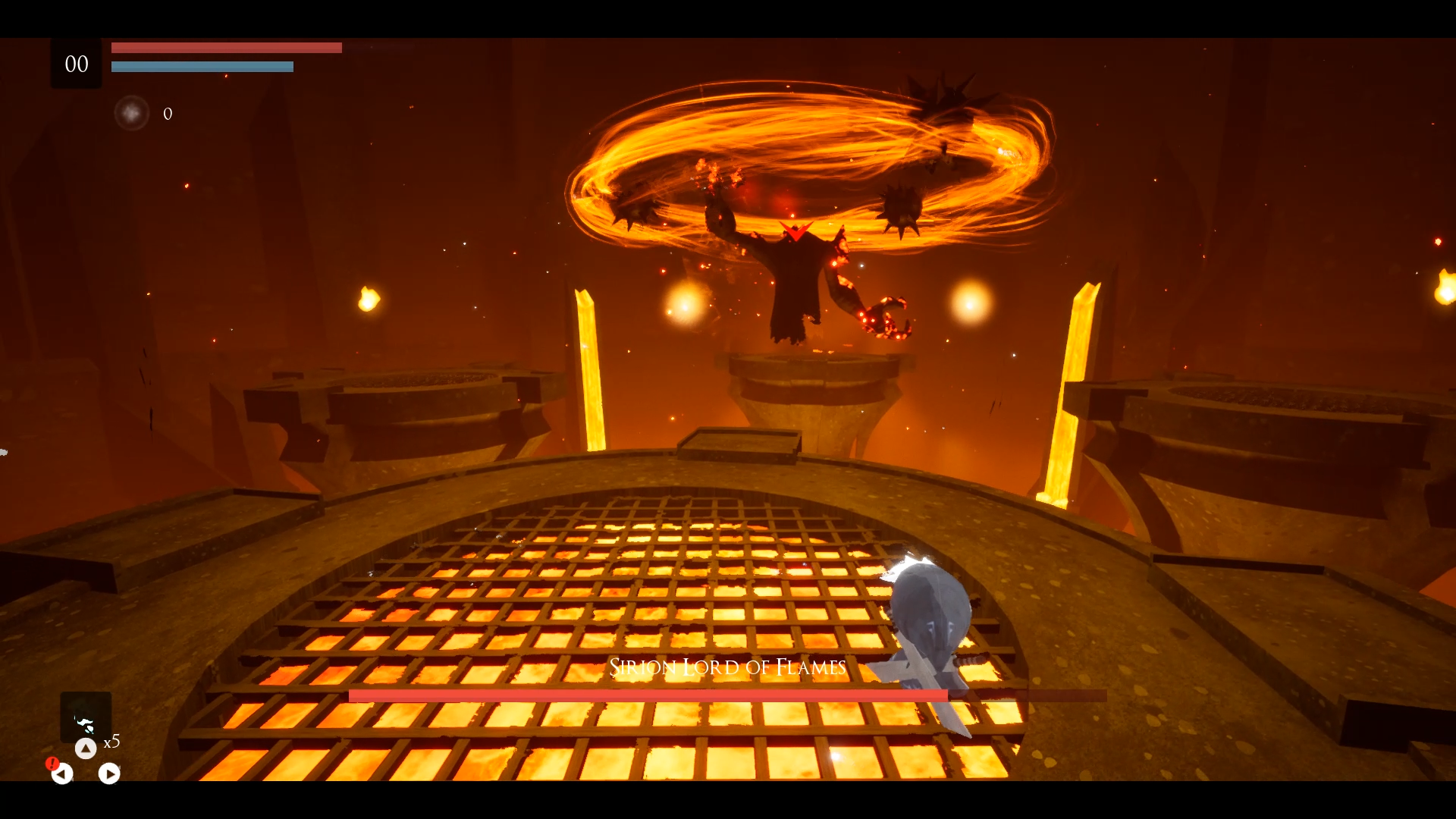 Blue Fire encourages you to explore every chest and room you come across with a variety of neat collectibles hidden behind creative blockers. Break all the crates. To my surprise, there are several emotes you can find on your journey that act as a fun addition to your gameplay. My favorite is the techno dance emote that actually plays a funky beat for Umbra to dance to. 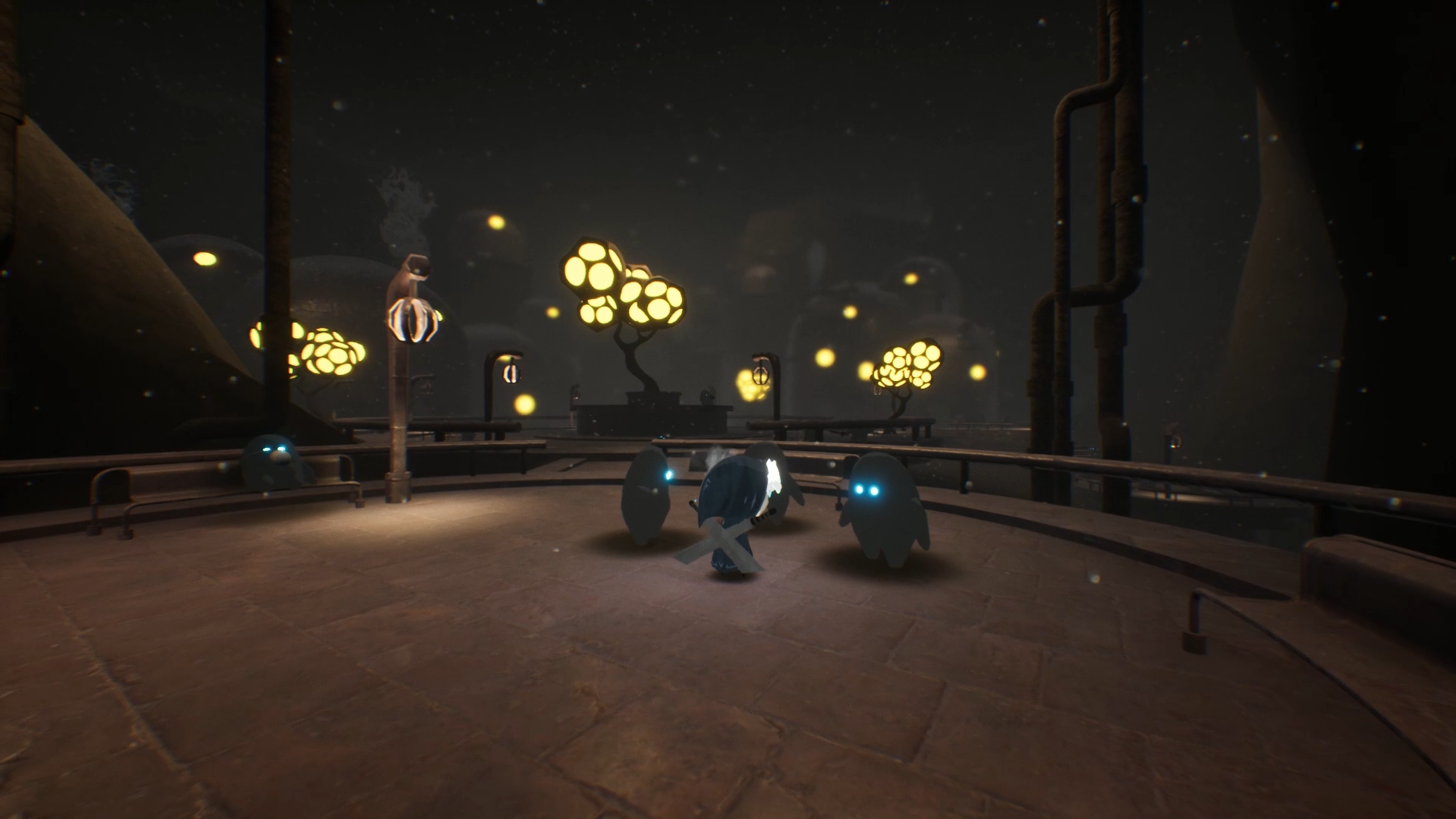 Meet new friends and learn more about the world of Penumbra.

In addition to the hidden collectibles, there are a few distinctive characters scattered throughout the world with some interesting bits of dialogue. These little friends wander through Penumbra in a daze, giving you hints about what has happened to the world. I personally love this kind of storytelling. It lets you experience the narrative in bits at a time and through its characters instead of beating you over the head with exposition. 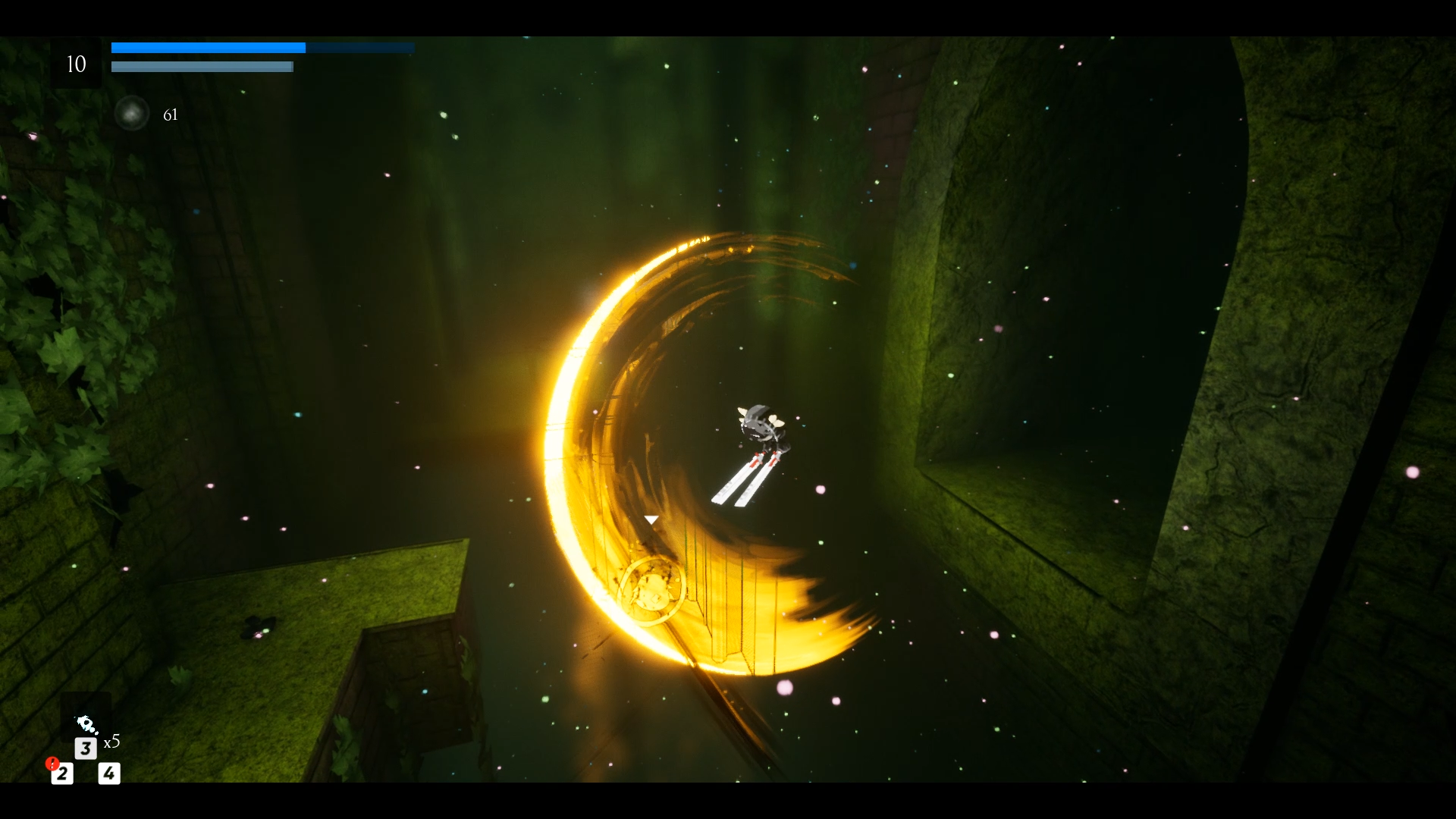 The warrior of light and darkness executes a mid-air attack.

Though much of the story is still a mystery to us because of the short demo, I am already head-over-heels in love with Blue Fire. The art style, soundtrack, and world-building all come together to piece together something that is very reminiscent of some of our favorite nostalgic games, while managing to craft something that is unique and can stand on its own. Blue Fire is set to release in Q1 of 2021 on Steam, with an expected release on the Switch in its future. 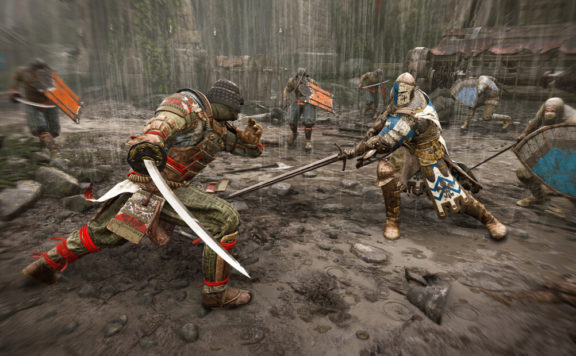 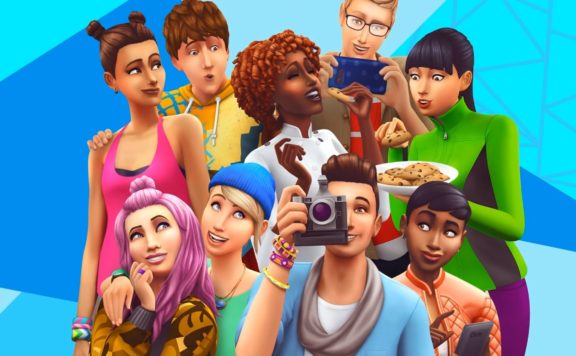 Blue Fire is a fast-paced action-adventure game that drops you into the fallen world of Penumbra. Don’t be fooled by the cute character designs, there’s a dark secret lying just beneath the surface. Graffiti Games was kind enough to let us ...
0
Average User Rating
0 votes
Have Your Say!
Your Rating: 0
Submit
Write A Review
Genre:Action, Adventure, Indie, Platformer
Developed By:ROBI Studios
Publisher:Graffiti Games