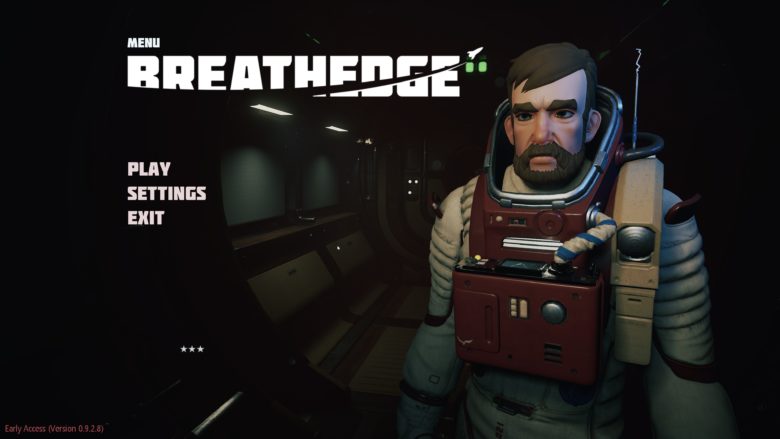 I don’t know about you, but I’ve spent time on a farm. I’ve had to feed chickens. And if you’re looking for a game to wreak your vengeance on them, this is definitely one of them. This is our Breathedge review for PC. 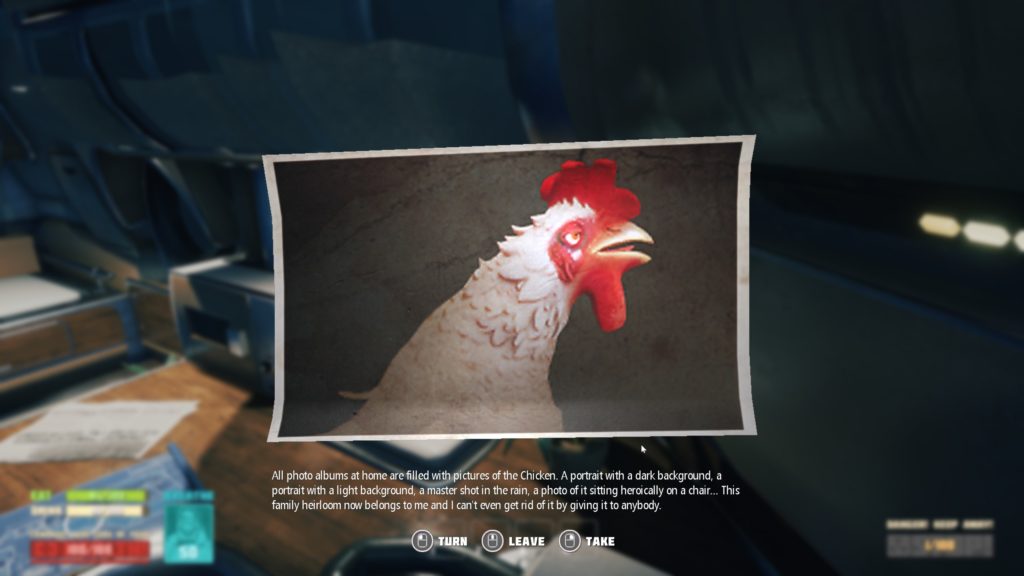 The immortal chicken passed down by gandpa. I wouldn’t want it either.

Unfortunately, I learned early on that Breathedge is one of those games that makes me motion sick (a dubious honour held by a handful of other games) so if you’re affected by that rarity, be cautious. I did, however, have some OTCs I could take to allow me to play, albeit in a semi drugged haze. This, it turns out, was more than fitting. 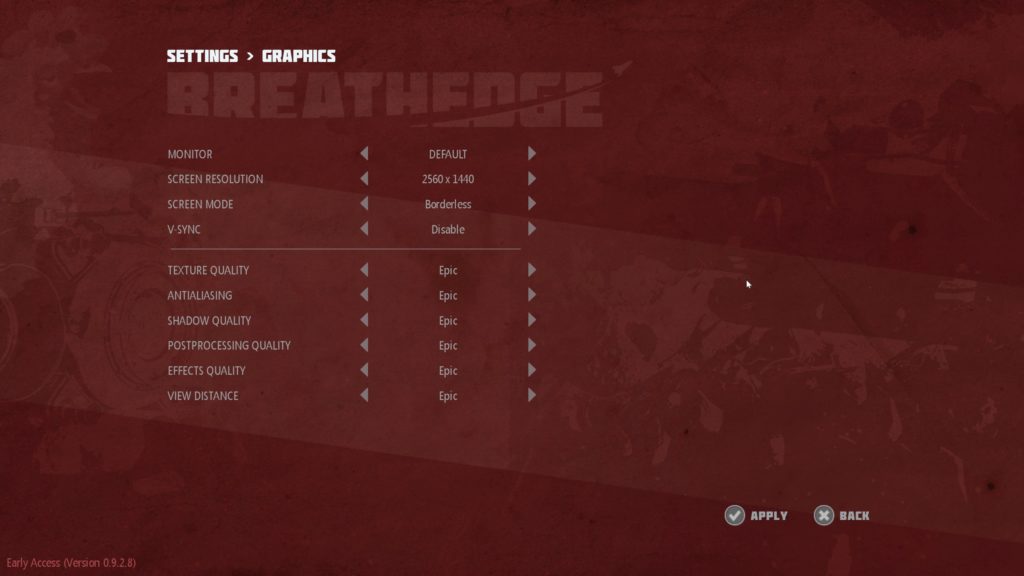 Do not try to play this in 4k. It will-almost certainly-cause the game to glitch and you will have the game flip monitors and get huge and squat in a corner like a sad puppy you cannot reach. Yes, on a 4k monitor.

The game itself, aside from that little problem, is a comedic survival-in-space scenario. You’re equipped with an immortal chicken (which you allow to be electrocuted to render wires safe to approach-sweet vengeance!), and a suit with little oxygen and a cheerful AI. The humour is male, which is to say, your shuttle-which was snugged in the carrier that just blew up-is decorated with old style pinups, and later you’ll find a handcuffed man with handy scissors in his groin (ouch), and a floating packet of male enhancement pills. Your suit takes the opportunity to pleasantly remind you that while it may be murder, there’s hardly a point in solving it, since well…everyone’s dead now. 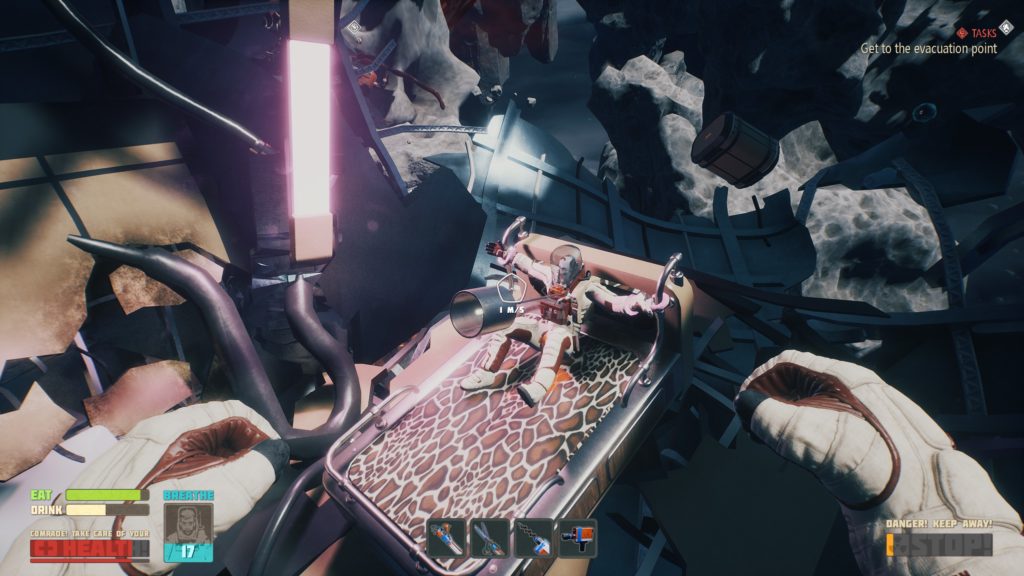 Your intro is filled with the odd humor but makes for a good scene-setting. You’re hauled up before two robots to be interrogated, and the game is, apparently, your description of what happened. If you die, they pop back on your screen, reminding you that you must be lying, since you’re still alive, and then sent back to your last save.

I did get a giggle out of things like how your giant space cruiser was the “Unnamed” with available ad space, the angry broccoli in your newspaper, and the handy survival guide tape you can watch on your screen in the shuttle. The game is peppered with comedic bits here and there, which makes it vastly more entertaining than similar offerings which take themselves ever so seriously. 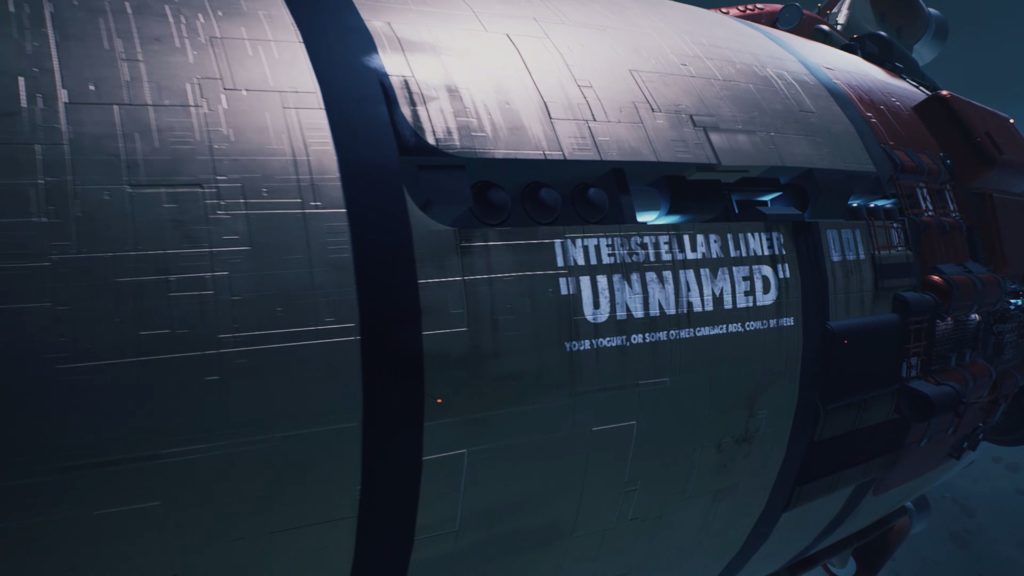 Babe, however, went from humor to irritating rather quickly. While your messages from the cleavage only icon are obvious references, including broken english and dubious advice, like stripping out of your space suit outside the shuttle to attract rescue with your naked flesh. The messages are frequent, constantly popping up and eventually feel more like being pestered than anything else. Maybe that’s intentional, but it bugged me. If they’d cut the frequency down to a third, I would have probably found it actually just another piece of cute humour. Instead, I found myself looking for the mute/block button. No, you can’t do that. Not that I’ve found anyways. 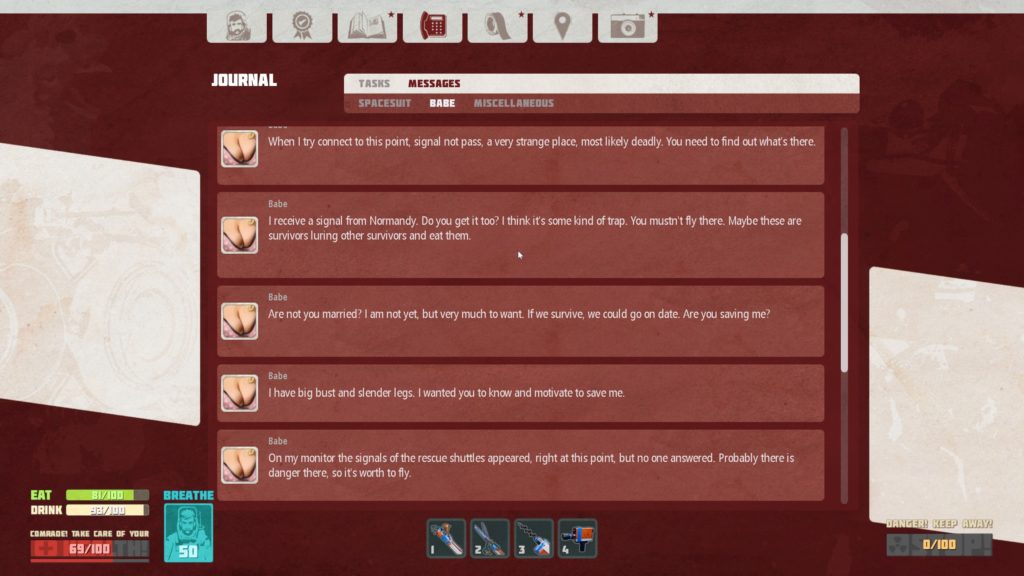 Babe, you’re funny and cute, but please just shut up.

The setting is semi Russian, with shiny retro future furniture, peppered with “comrades” and not just one, but two Russian music broadcast radios. So you can listen both in your cabin and in the airlock. I turned both off. It’s quirky but still a good solid setting, with bright colors and cheerful noise and pictures scattered among the frozen remains of your fellow passengers.

The controls are good, though the first scene, where you repair a gas leak, uses different controls than the rest of the game, which confused me for about ten minutes (anti nauseants do not come in non brain baking variety), but largely they’re easy to use and fairly intuitive, if off from some of the other control schemes I’m used to. For example, I kept trying to hit E to open/break things, when it’s a mouse click. HOWEVER (yeah it’s a big however) the game has bugs. Bad ones.

In my time playing, I had to uninstall, reinstall, and eventually delete the settings files in the folder to get the game from popping up on my graphic tablet monitor, enlarged and wedged into a corner so I couldn’t actually activate or change anything. This is, apparently, a common issue. Windowed mode frequently isn’t (I used it to alleviate some of my nausea symptoms), and whether it is or isn’t seems random. Ditto for the autosaves-which are supposed to happen when you enter your shuttle, but don’t always, meaning you can lose a lot of progress if you don’t manually save. SESO, folks (Save Early, Save Often). 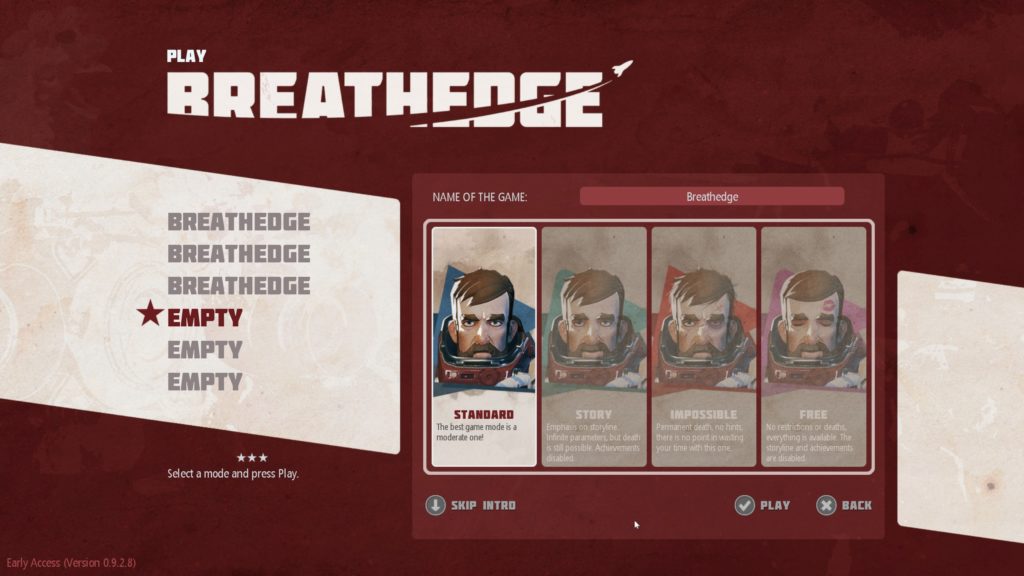 On the upside, there are four modes, but the one mode where you can explore without dying and worrying about lost autosaves doesn’t have the story in it. Good for creative mode folks, not so good for anyone else.

This is especially important because, once you get about an hour in, the humour is pretty much played out, and you’re left with an endless cycle of scavenging a couple of materials, and then dashing back into the shuttle before your air runs out and you die. Another bug is that your shuttle doesn’t always show and indcator, so you might have to spin around and wander until you can find it again. I’m not sure if this is intentional, though. It very well could be. Regardless, saving should be a priority, because, after an hour or so, you enter into the run-outside-grab-something-dive-back-in and repeat. Yes, you can expand your oxygen and improve your suit, but the shiny is still worn off rather quickly. 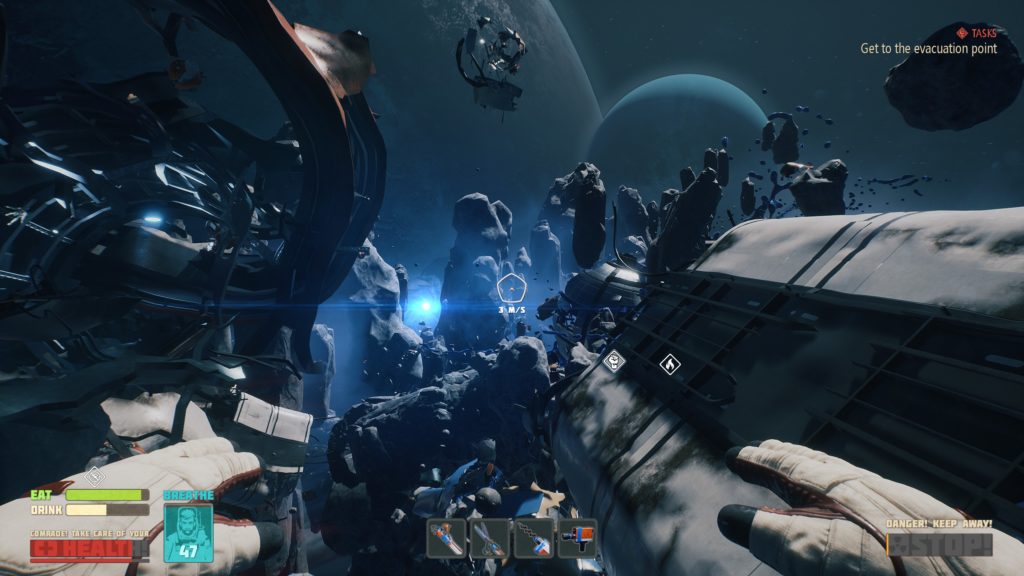 This is something you’ll be seeing *a LOT* of.

Note: A PC/Steam code was provided for the purpose of review.

Tags: Breathedge
Summary
Breathedge is a humorous, fun and quirky game, but it has a lot of gameplay interfering bugs. The first half-hour is great, but after that it tends to drop off, making it rather like a favorite food. Great for the first while, but tends to wear on you if you overindulge in a sitting. If you enjoy the humour and don't mind the repetition, and are lucky enough not to encounter any bugs, it could be a worthwhile purchase. As it is, it really needs some attention and fixes before I advise it as anything but a splurge “just because” buy.
Good
Bad
5
Average
Previous ArticleArgonus & the Gods of Stone announced for OctoberNext ArticleDC Universe Online invites you to get Metal 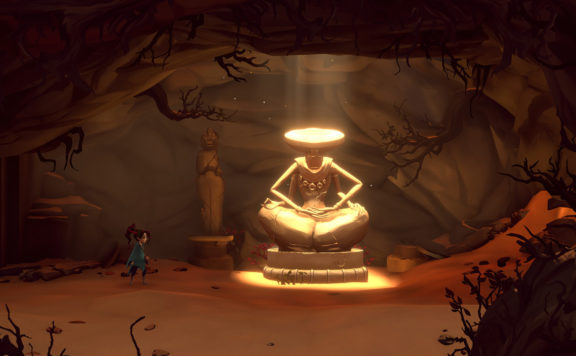 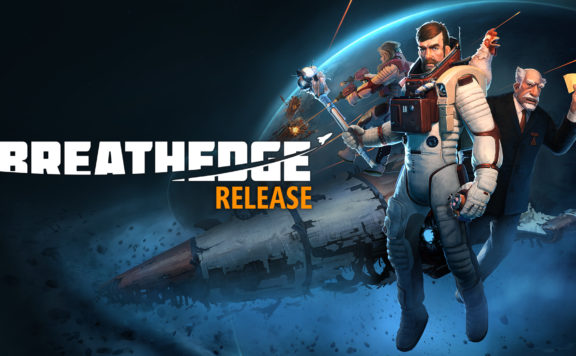 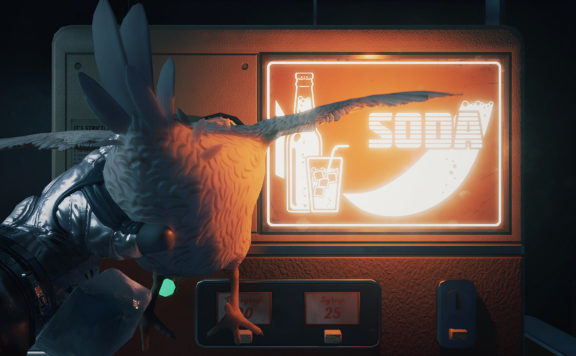 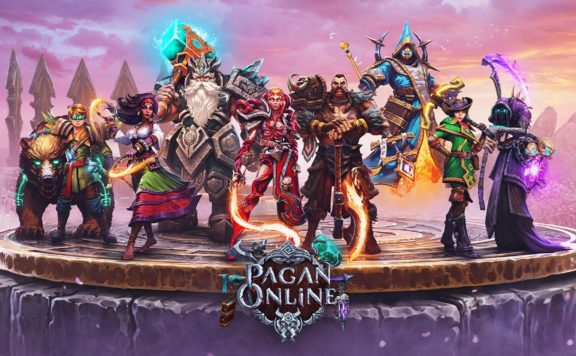