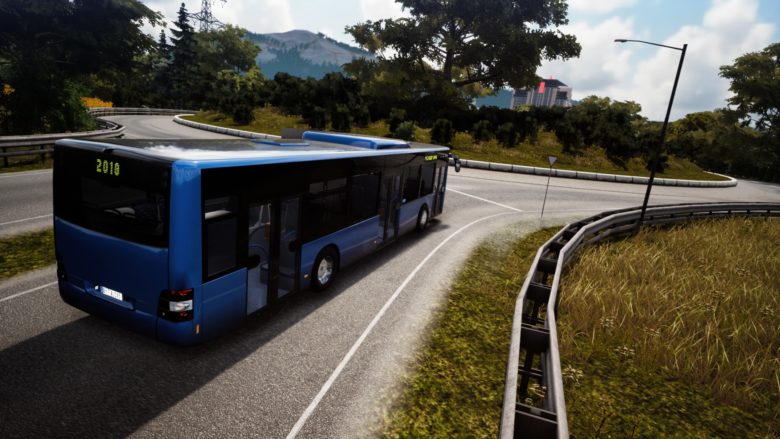 Tired of spending too much time on the train tracks? Astragon Entertainment has just the cure with new Bus Simulator 18 DLC.

Available now for PC conductors, the extension to the existing Bus Simulator 18 route is not the first addition to this bus simulator. It is the 7th update and joins a host of other mods and vehicle updates. Bus Simulator 18 is exactly what you’d expect from the developers at Astragon, a best in class transit simulator covering a wide urban area. The base game already contains 12 distinct city districts, a fleet of originally licensed city buses, and the freedom to make your own timetable.

Vehicles from the great brands: Mercedes-Benz, Setra, MAN, and IVECO are a common sight in solo mode or in the multiplayer mode of Bus Simulator 18. Now, you can take these buses somewhere new with the new official Bus Simulator 18 DLC. This map extension adds 2 new districts to the city and a total of 20 new stops. The district of Kerststadt is full of students, entrepreneurs, and other busybodies that have places to be right now. Sonnstein, on the other hand, is a laid-back location where players can take time to enjoy the rural scenery. You can check out some of the views in the official trailer, below.

A host of new characters, cosmetics, and missions are dotted around these areas, giving players a new experience as they expand their transport operation across the city. Just as you would expect, multiplayer is fully supported in the new Bus Simulator 18 DLC, meaning your cohorts can help run things when you want to just sit back and enjoy the ride.

Written by
Ed Orr
For those of you who I’ve not met yet, my name is Ed. After an early indoctrination into PC gaming, years adrift on the unwashed internet, running a successful guild, and testing video games, I turned my hand to writing about them. Now, you will find me squawking across a multitude of sites and even getting to play games now and then
Previous ArticleUtawarerumono: ZAN Will Fight You This SeptemberNext ArticlePhantom: Covert Ops Announced For Oculus Quest