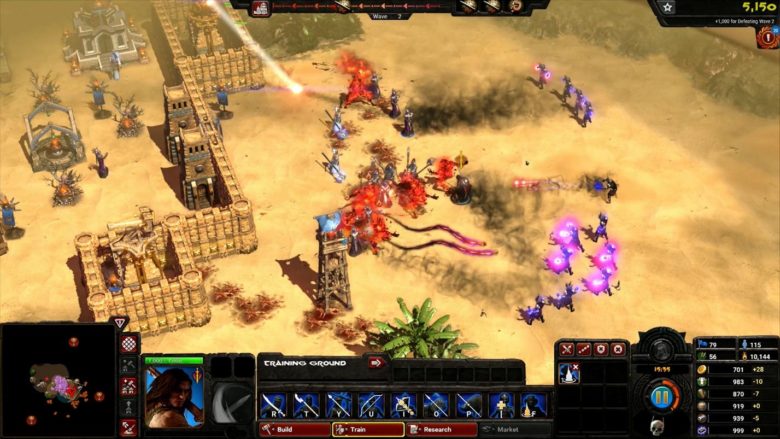 It is almost time to Crush your enemies, see them driven before you, and hear the lamentation of the men or women. In just 30 days, Conan Unconquered comes to PC. In anticipation of this, Funcom has released 20 minutes of co-op play for this survival RTS.

Developed by Petroglyph Games, formed in the wake on Westwood Studio’s demise and the team behind Grey Goo, this survival Real Time Strategy takes players back to a time before construction yards and mammoth tanks, to the realm of Cimmerians and Crom. Sunk deep in the mythology of Conan, this particular RTS takes a different tact to the old traditions of C&C. While it still retains many core RTS base building components, Conan Unconquered adds a survival mechanic that puts players up against players in the brutal and unforgiving world of Conan the Barbarian. Under constant attack from waves of enemy soldiers and in a randomly generated environment, it is up to you to guide a small selection of heroes and a meager selection of units to glorious victory.

With everything set against you and your hero characters, it seems only reasonable to call on the help of a few friends to get by. Co-op play is a core component of Conan Unconquered and allows players to combine their skills, resources, and knowledge to overcome everything set against them. Co-op play in Conan does not just provide an extra pair of hands, it also spreads the risk and rewards of combat. While individual units and resource pools seem to be quite distinct, players share a base and expand various tech trees, all while income streams and upkeep costs are shared between you and your associate. If you know that one person who rolls need for everything, you might want to consider if they are going to help you to survive or doom you all.

The preview released by Funcom and Petroglyph gives a glimpse of this unique take on RTS games and can be found just above. Conan Unconquered is due out on 30 May for PC. It is available for pre-order via Steam and via the official Conan Unconquered website right now.

Written by
Ed Orr
For those of you who I’ve not met yet, my name is Ed. After an early indoctrination into PC gaming, years adrift on the unwashed internet, running a successful guild, and testing video games, I turned my hand to writing about them. Now, you will find me squawking across a multitude of sites and even getting to play games now and then
Previous Article3 Ways to Smash Through Gaming PlateausNext ArticleScuf Vantage Cosmic Edition Review