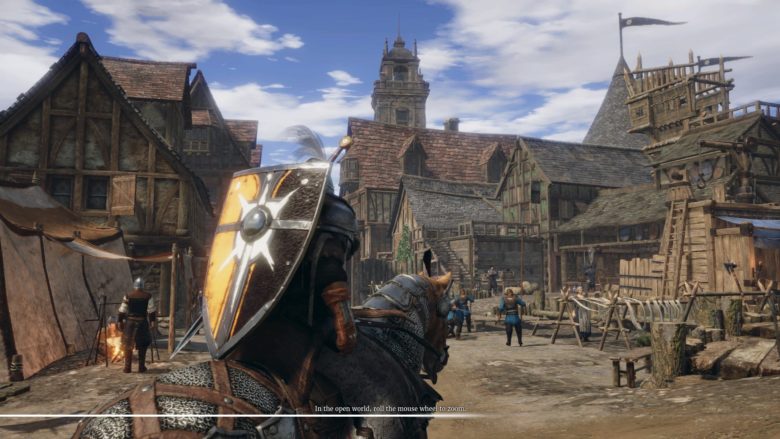 This review adds to the review-in-progress released a week ago.  I’ve progressed somewhat, veering away from House battles and focusing more on my own character progression.  I’ve had a lot of fun expanding my repertoire of weapons and units, as well as exploring the various types of battles.  I’ve also had more time to really pay attention to smaller details that can add to or take away from the enjoyment. This is our official Conqueror’s Blade review.

Generally speaking, visuals and sound for a game are typically supportive of gameplay.  When done poorly, they can detract from a game.  Fortunately, Conqueror’s Blade doesn’t suffer too much in this department, but some variation in sound effects would really help.  Relatedly, the game performs very well.  I rarely find myself lagging due to either frame rate or ping, suggesting that the game is well optimized.  There are no slowdowns when the screen is full of friendly and enemy units, even on my modest machine.  I can’t tell you how much I appreciate that. 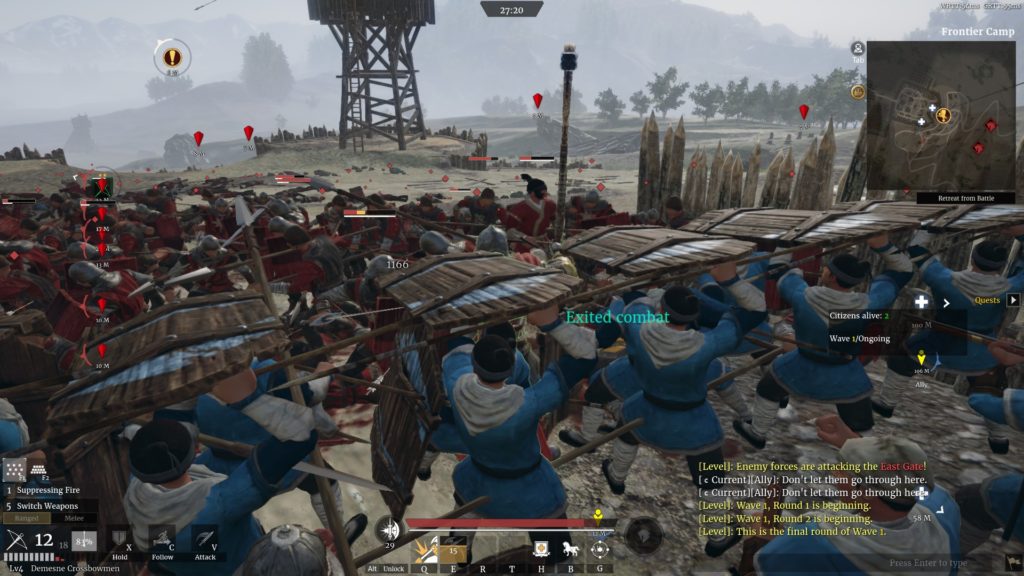 That said, progression in Conqueror’s Blade is, as you may imagine, slow.  Whether leveling your own character or units, it may take many battles before you see some the experience bars move an appreciable amount.  Conqueror’s Blade offers experience booster items for battles and premium status for accounts, which may be worthwhile to those who play more casually and have money to spend.  Experience boosters can be earned through quests, but I don’t know how often they’re awarded.  I don’t feel a pay-to-win vibe, although it’s safe to say that a significant investment of time will be necessary to enjoy higher tier troops, with or without boosters.

Building your units involves unlocking them through honor points and outfitting them with weapons.  A 30-man unit requires 30 kits of an appropriate weapon type.  You can outright buy the unit with in-game currency, but that becomes prohibitively expensive over time.  Crafting weapon kits for your units requires traveling the realms and harvesting appropriate materials, but this, too, carries risks.  As mentioned above, you can expect to obtain those high tier troops will take somewhere to the tune of ‘forever’ to get to, but I suspect that will make their acquisition all the more enjoyable.

I’ve tried three of the weapons now and favor the halberd and sword/shield.  The halberd clearly makes for a better mass combat weapon, but defense is sorely lacking.  Similarly, the sword has less offensive power, but the shield is very nice for holding off persistent enemies.  I’m still curious about the other weapons, but they’ll have to wait.  Each weapon accrues its own experience, so if you want to develop more skills for one of your weapons, you’ll have to play that weapon. 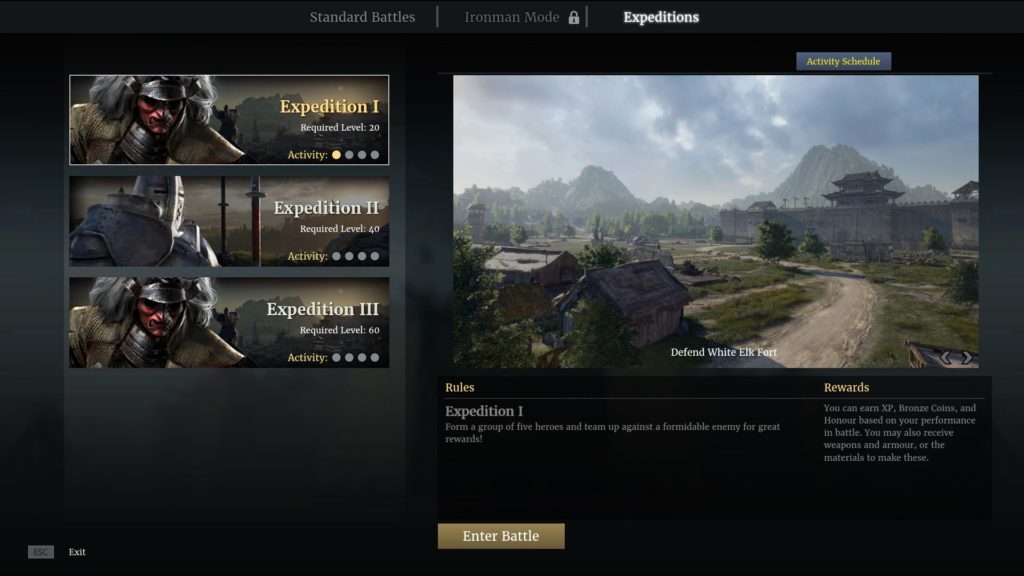 Player vs Player combat is enabled on the world map, so there is an ever-present danger of being attacked by players while outside the safety of town.  You can take varying numbers of units with you as you travel, but just like in Mount & Blade, the more troops you have, the slower you travel and the more food you consume.  Traveling light with only peasant troops may help you get the resources you need, but you’ll be vulnerable to ambush if you’re not careful. 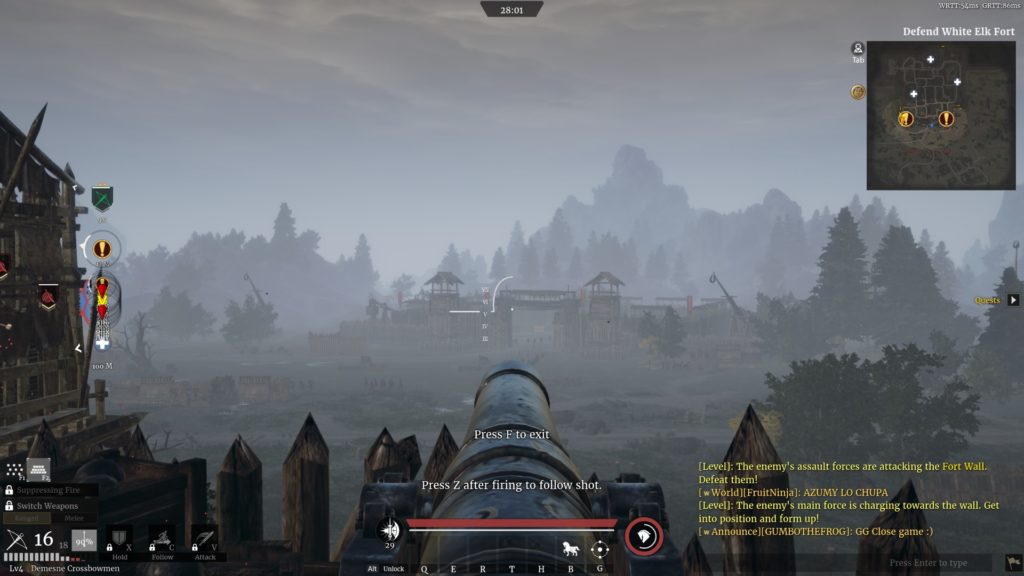 While in town, you can enroll in matchmaking for various fights.  Some are PvE (training battles against bots or ‘Expeditions’ with waves of enemies), whereas others are PvP (domination-style battles for control points and siege battles).  As the game has progressed, I’ve had a more difficult time finding matches, although it may just be a schedule thing (I’m sure playing at night will yield more players).  I find myself going to the match types that people are playing at the moment, which I guess works well enough for me.

The battles are a blast.  Matches typically have about 15 players per side, and quitting mid-battle is penalized, although I haven’t explored the penalty system much.  Siege battles remain my favorite battle type.  Using siege equipment is worth it, and it’s reasonable to assume that unless you bring your own siege engines, others will be competing for the chance to use what’s available.  That said, for some reason, I’m almost always a defender in the siege battles.  I prefer being a defender, but it’d be nice to attack every so often.

It is reasonable to assume that odd bugs are going to occasionally pop up in any game (e.g., an enemy NPC commander spawned naked in my last game), and Conqueror’s Blade is no exception.  The developers are patching frequently, and if they remain this committed to polishing Conqueror’s Blade, I think it’s fair to say that the game may become even more enjoyable.

Tags: Conqueror's Blade, MMORPG, My.com, pc, review
Summary
Conqueror’s Blade is genuinely fun. The battles are frantic, the breadth of units is awesome, and the variety of game modes and diverse places to progress mean that Conqueror’s Blade is a great game to play for both casual and dedicated players. Its open-ended and broad nature also mean that there are plenty of avenues to explore, whether on the world map, in terms of mechanics, or even progression. Just be prepared for to sink the necessary amount of time to enjoy all that it has to offer.
Good
Bad
8
Great
Previous ArticleDead By Daylight Mobile Is ComingNext ArticleKlondike: A thrilling farming adventure 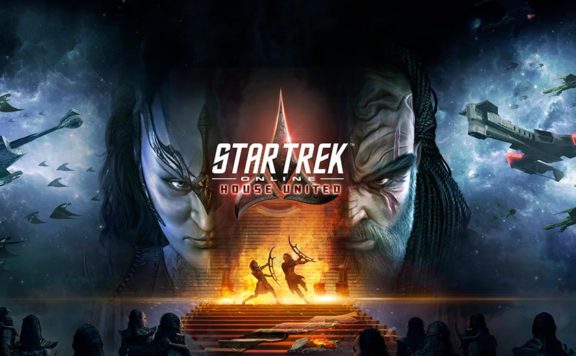 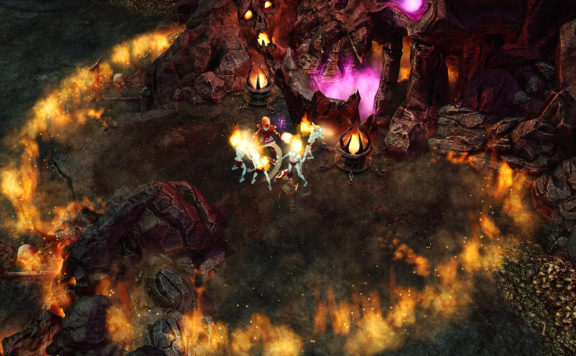 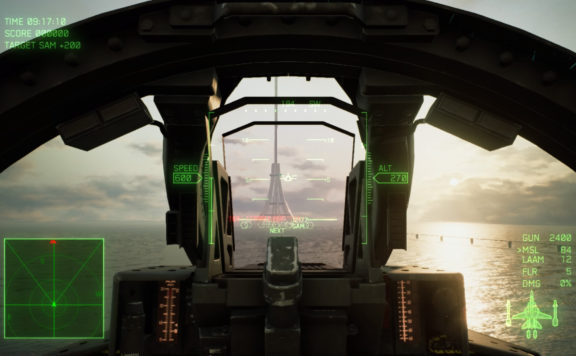 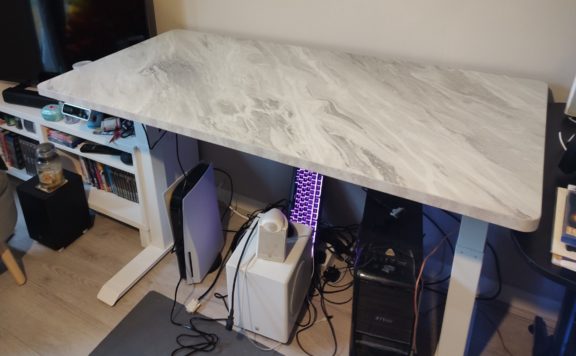