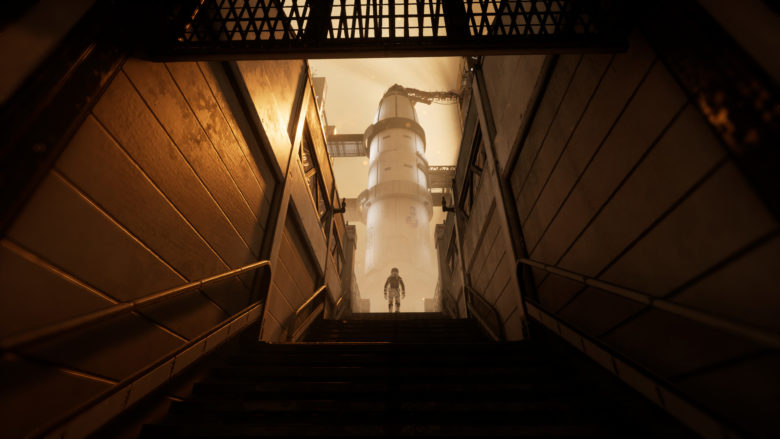 Deliver us The Moon, the new game from Wired, is full of promise as it sets out into the great beyond and we got a hands-on preview to find out if this moonshot is worth the journey.

I lied, somewhat, when I said things were full of hope. Deliver us the Moon is a sci-fi thriller set in an apocalyptic future. An Earth beset by massive climatic shifts and dwindling energy reserves is left in ruin after communications with the moon are suddenly cut. As a lunar colony goes silent, power transmissions from an advanced energy facility also go dead. In response, a lone astronaut, codenamed Fortuna, is strapped to a rocket and the last hopes of mankind are sent hurtling towards an unknown fate.

The work of developer KeokeN Interactive, this new adventure is due to hit PC and consoles soon. On 10 October PC players will be able to take the first steps out into space, make a trip to the moon, and uncover the mysteries that surround the moon base. We got there early, and while Deliver Us The Moon started life as a successful Kickstarter, the game certainly does not have the look and feel of an indie experience. 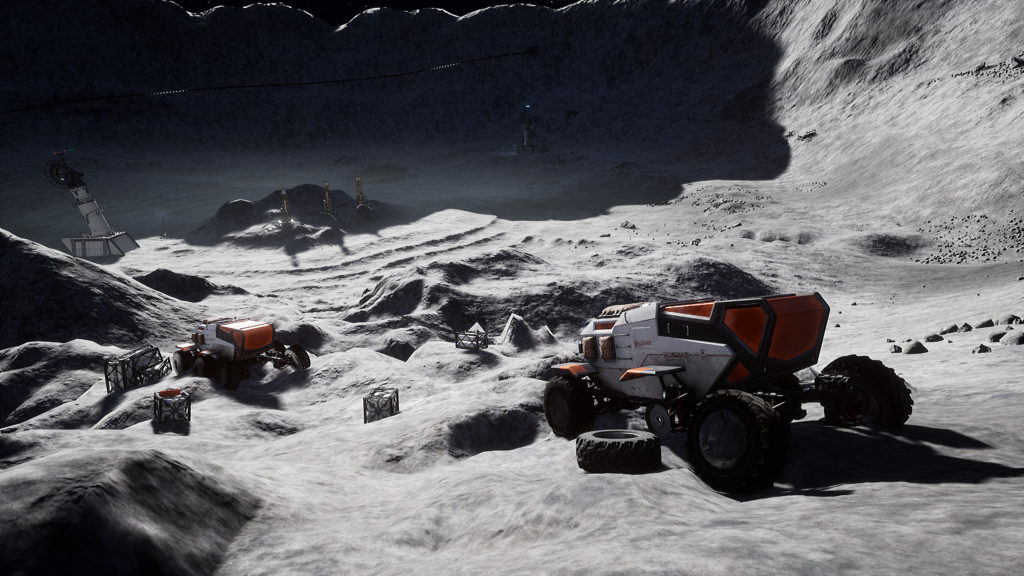 Players open this adventure on a dusty launch platform. A mix of first and third-person perspectives glimpse a ramshackle construction and some impressive visuals. The glint of the sunlight as juts through a desert storm or, the shadows that dance across the lunar surface make a definite impression upon new members of the Earths Worldwide Space Agency. While the impressive natural landscape of the upcoming lunar surface and the meticulously detailed debris fields are bound to look incredible when Ray Tracing lands on the PC release, the detailed interiors of every cockpit and control panel are also worth taking a look at when you get a moment of peace.

That moment of serenity might not seem forthcoming at first. Despite this, the most impressing emotion is, initially, one of isolation. From the first steps out onto the storm swept launchpad or a hop across the lunar surface, players begin to Deliver Us The Moon on their own. Placed in charge of their launch and catapulted up into the stratosphere with nothing more than a friendly voice to guide them, this is not entirely dissimilar to those first moments in Half-Life. The vast expanses on the moon, the unforgiving emptiness of space, and a deserted moon base encourage the player to step forward through each of the game’s puzzles, challenges, and traps to find out what exactly is going on.

All Alone In The Night

In order to save humanity from a desolate future, there are more than a few obstacles to get through. A robotic sidekick known as the ASE introduces some unexpected assistance to these scenarios. With nobody to assist and a Moonbase in utter disarray, anybody delving from the outer docks into the deepest areas of the facility will need to bypass locked doors, disconnected power couplings, and fend off the odd malevolent sentry guard. The ASE adds an extra range of utility to the player’s tools, like the laser cutter, and even allows players to explore with some level of safety. These implements are used in a fairly repetitive manner but, thankfully scenarios are varied and engaging. It seems that the intent is to make puzzles easy to access, layering complexity through logical problem solving rather than simple skill with a controller. 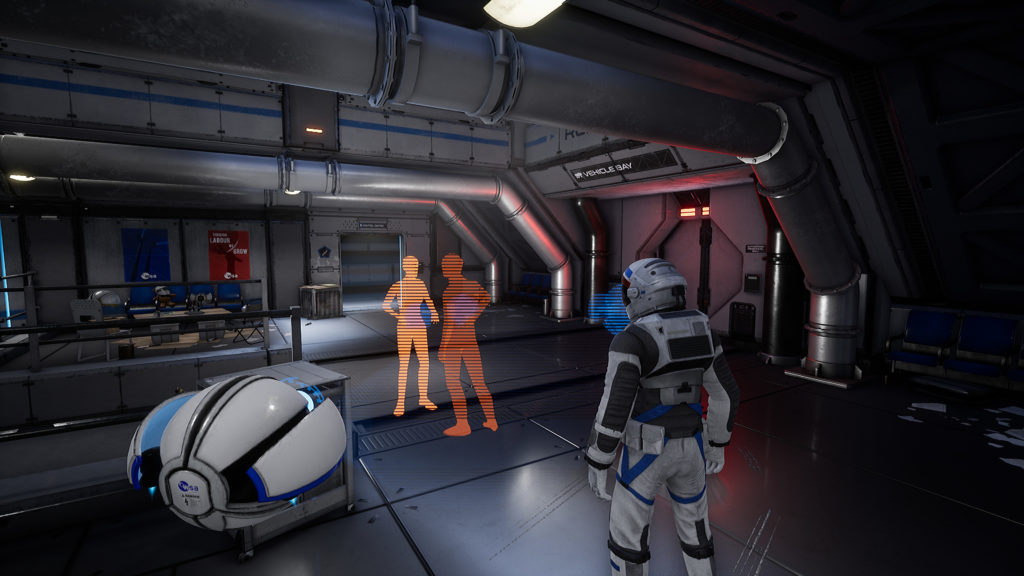 This does prove true to some extent. As the game proceeds, a player might make use of the ASE robot to go explore an abandoned area via a ventilation tunnel or trigger an unreachable door. However, this will eventually find players separated form their bot, moving objects around in tandem to unlock the next secret of the moonbase. This increased complexity varies enough to keep the game from getting too pedestrian, but it is hardly the most challenging either.

Chapters in Deliver Us The Mon can take anything from around 20 minutes to work through forcing most of the game to keep a tight leash on the depth of puzzles. KeokeN manage a strategic balance that keeps things engaged and avoids getting lost in the solitude of the whole situation. While the game is littered with little moments of brevity and personal insights, Fortuna doesn’t need a malignant alien presence to keep you on edge. The gaping space outside is never far away and it is repeatedly used to remind players how fragile you and the Earth are.

Thrusting players out into the vacuum of space with a rapidly dwindling oxygen supply is one of a few rapidly repeating mechanics that you will face in a fight to get to the truth of things. While this is believable, the race to find an airlock becomes less of a surprise as time ticks on. Many of the game’s obstacles, while brief, fail to live up to early expectations. What begins with a rocket launch sequence, falls into finding the post-it note. It’s a compromise that is clearly made to keep players from getting trapped and allowing the narrative to push the player on, yet I still feel like the even the game’s more malicious robots were hardly much trouble.

As I described, these more mechanical sections seed narrative content throughout the game, allowing you to stumble over stories and pulling the player through some of the more lift and shift sections of the moon base. Deliver Us The Moon sets up some epic stakes with the future of humanity but the core of this game is a personal story. You’d think that starting out as a masked saviour with little introduction makes it difficult to engage but KeokeN address this in a few particular ways. Objects strewn around the deserted moonbase give an insight into the idealism and desperation of the individuals trapped, by the expectation of humanity down below. The ASE is the game’s window into the past. Throughout the game’s more mechanical segments, the ASE allows players to replay holographic records of events during the base blackout. This doesn’t just connect players to the actions of the base personnel, it effectively drags you through chapters of the game and provides a central narrative arc to chase.

That said, the narrative here is worth running after. The writing is compelling in a way that is hard to describe without spoiling everything. The script, and it is an impressive script, moves from a single awe-inspiring moment as you lift off into the unknown to the mystery that awaits you, and on to a very personal quest. Deliver Us The Moon humanizes the journey that it sets out on, making the pale memories cast across the moon feel alive. This is not just a puzzle to be solved, it’s a quest to save everything that matters and there is not a single maniacal genius in sight, just the hopes, dreams, and decisions that make us human. In the end, Deliver Us The Moon takes players on a journey. The scenery might be amazing, the soundtrack beautiful but it’s the humanity woven through this game that makes it worth playing. Deliver Us The Moon blasts onto PC on 10 October. You can find out more about the game without spoiling it over at the official website now.

Written by
Ed Orr
For those of you who I’ve not met yet, my name is Ed. After an early indoctrination into PC gaming, years adrift on the unwashed internet, running a successful guild, and testing video games, I turned my hand to writing about them. Now, you will find me squawking across a multitude of sites and even getting to play games now and then
Previous ArticleBattle for Azeroth CGI Compilation – Saurfang’s Mak’goraNext ArticleBlizzCon 2019 Virtual Ticket Items Detailed