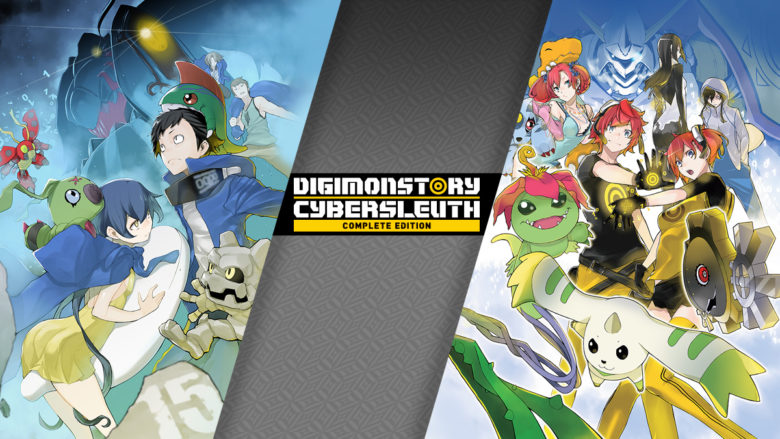 There are many wonderful perks to owning a Nintendo Switch game console. One of them being that games, we might have never gotten a chance to play on other systems, are making their way in droves to our “little portable of wonder”. The latest is Digimon Story Cyber Sleuth the anime-styled role-playing game from publisher BANDAI NAMCO Entertainment and developer Media Vision.

The game is based on the “Digimon” universe. Digimon is short for “Digital Monsters”. Digimon is a Japanese media franchise originating in 1997. The franchise includes virtual pet toys, anime, manga, video games, TV shows, films, and a trading card game. Some say it’s a direct competitor to the Pokémon franchise. The Digimon creatures are monsters living in a “Digital World” which is a parallel universe that originated from Earth’s communication and social networks. This is our Nintendo Switch Review of Digimon Story Cyber Sleuth: Complete Edition! 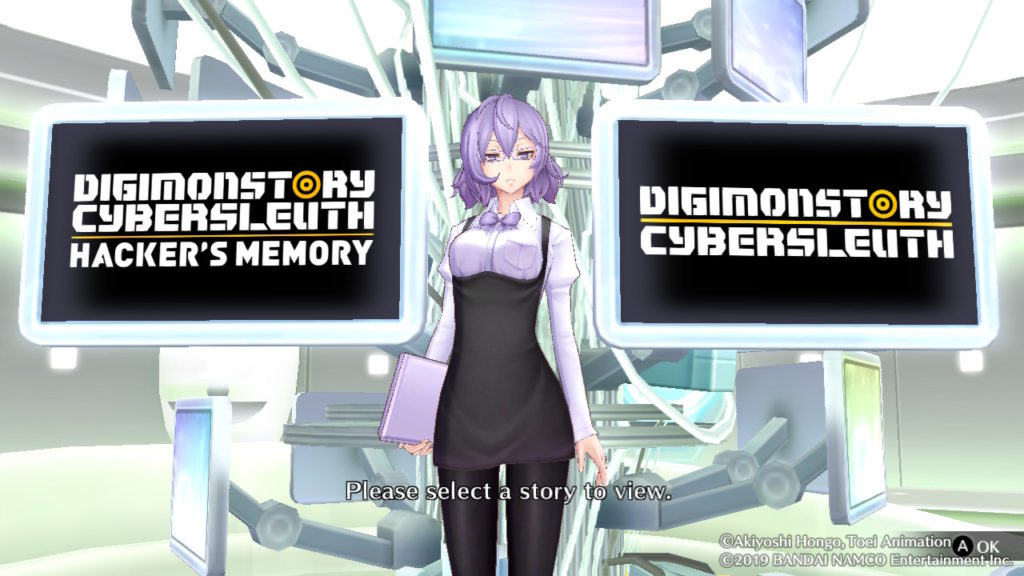 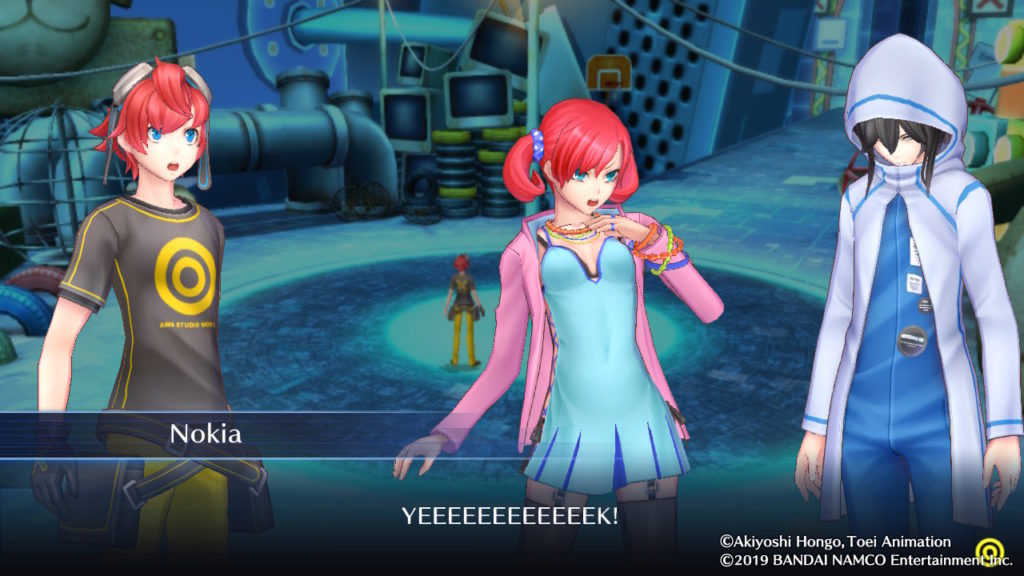 In Digimon Story Cyber Sleuth, you play as a silent character, either as a male or female. You and your friends like to visit a cyberspace zone named EDEN. EDEN is a next-generation Web service where users physically enter it and make use of various widespread services such as shopping, etc. Using EDEN also allows people to physically meet. After being threatened to become a victim of a hacker you meet up with two of your friends and get access to a Digimon Capture program. Digital Monsters are typically used as programs and only used by hackers to cause trouble. Things spiral out of control and somehow you end up digitally separated from your physical body. All of this catches the attention of a detective who takes you under their wing as a cyber sleuth assistant to help you solve your problem. 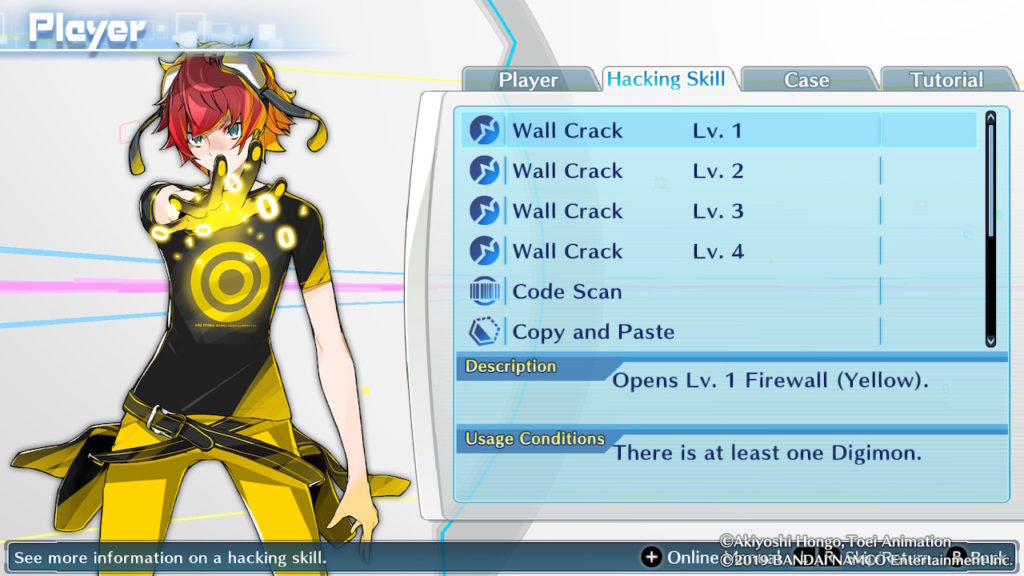 Yeah, I got skills!

All of this plays out nicely using crisp, colorful cel-shaded graphics in a traditional anime-style. The artwork is quite colourful and looked crisp on the big screen in docked mode as well as in undocked mode. In undocked mode quest text was easily read without eye strain. And yes there are voice-overs but unfortunately, they are in Japanese. Thankfully, the English translation in dialogue text is flawless which alleviates any further distraction. Unfortunately, due to the Japanese voice-overs, I would read and advance through the text quickly so I was, most of the time, ahead of the voice over. Eventually, especially in undocked mode, I would turn the volume down, which meant I couldn’t hear the enjoyable soundtrack.

If you’ve played other creature capture RPGs like Pokémon then you’ll feel right at home here. You’ll have your main story to do and eventually be able to work on side quests. As you travel through the digital world, in third-person, you’ll come across random Digimon battles. It’s your Digimon, up to three, with eight in reserve against the opposing squad of Digimon. Combat takes place as turn-based events where you can attack, special attack, use items, guard or try to escape. You can also do “auto-battles” if you prefer to multitask while playing. 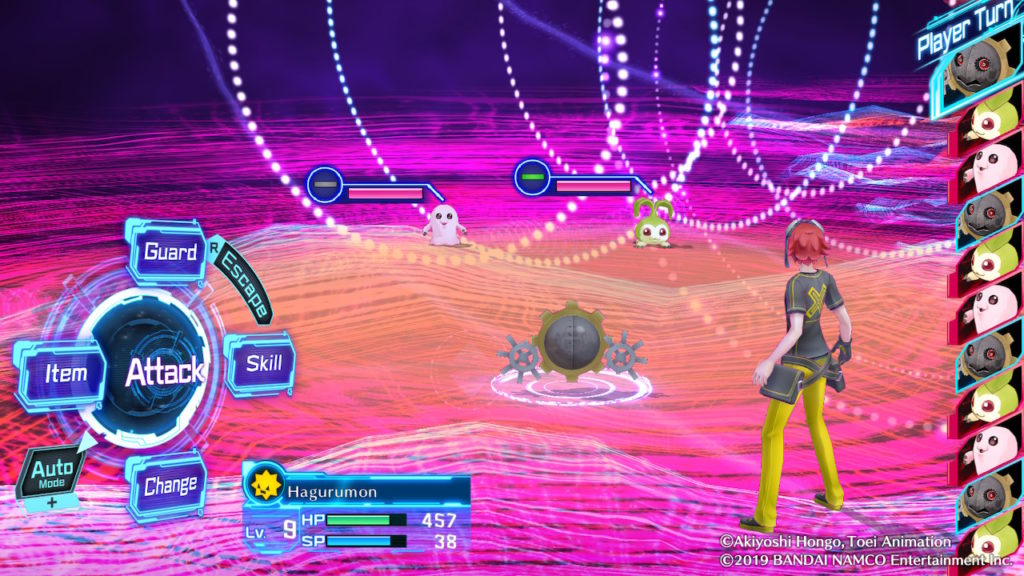 Like many of these sorts of games Digimon come in “types”. One type has an advantage over another type, e.g. Virus -> Data -> Vaccine. When a Digimon is found in a random encounter a “capture” meter is shown on the screen that fills up based on your experience against this Digimon. 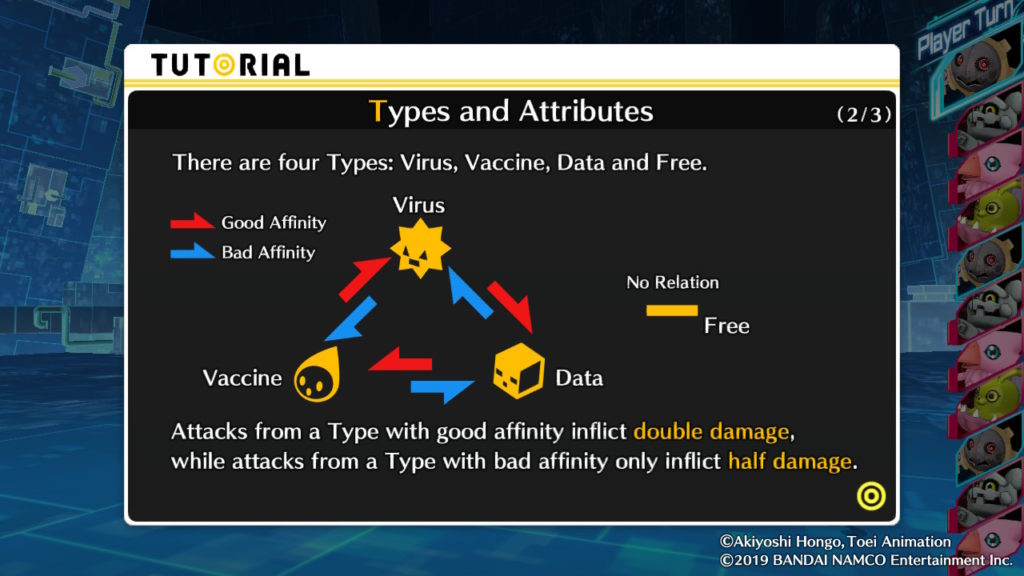 The triangle of life

Once the meter reaches 100% you can add the Digimon to your team. If you wait and get the meter to 200% you’ll capture a variant with improved stats. Captured Digimon can be leveled and “Digivolved” (evolved) or “De-Digivolved” (de-evolved). Both actions allow you to traverse an evolution tree in two ways.

The Wheel Of Destiny

All of what you need to know is provided by selecting the X button which pops up a nice command wheel. For instance, the wheel has access to your player stats, your Field Guide (akin to a Pokédex), the Digiline (a chat network), Save command access, etc. The wheel is easy to use and responsive.

The only other minor complaint is that you are rewarded some for exploration. Exploring off the beaten path sometimes finds you Digimon “medals”, which are essentially trophies you sell. When you encounter one of these hitting the “A” button picks it up. This was finicky for me and took more tries than necessary to succeed. 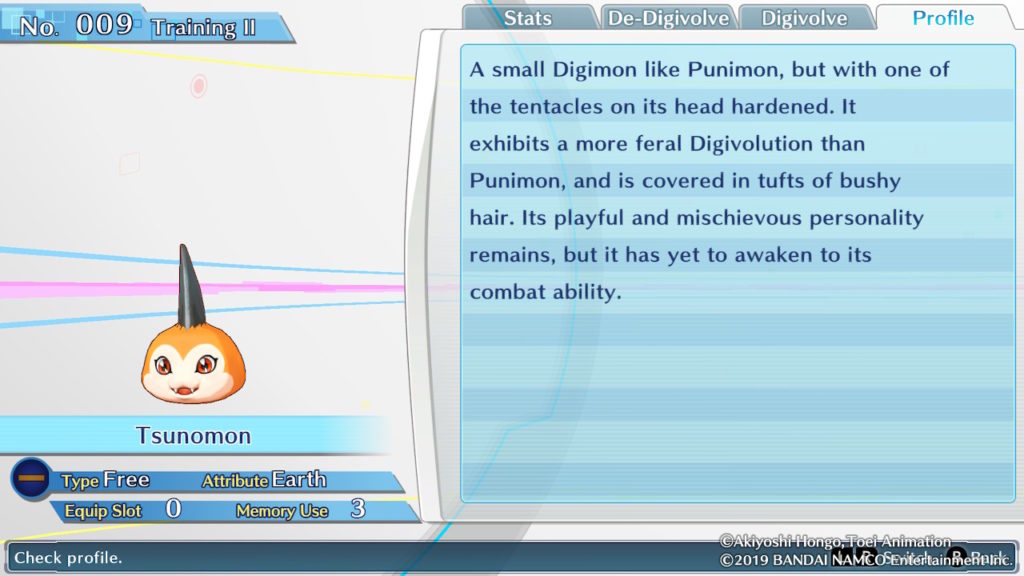 Even if you’re new to the Digimon universe, as I was other than seeing the cartoon, you’ll have no problem jumping into “Cyber Sleuth”. Both games combined provide a great RPG gaming experience. With well over 300 Digimon to “catch” playing both games should keep you occupied for a lot of hours.

Compare To: Pokémon Shield And Sword

NOTE: Our review was done using a download code supplied by PR.

Tags: BANDAI NAMCO Entertainment, Digimon Story Cyber Sleuth, pokemon
Summary
Digimon Story Cyber Sleuth: Complete Edition might, at first glance, come off as a Pokémon copycat but don't be fooled. This game has a lot to offer on its own. It meshes the real world and digital worlds together all while providing its own unique creature capture system. THIS is the game Pokémon fans should be playing while they wait for Pokémon Sword & Shield to arrive!
Good
Bad
9
Amazing
Previous ArticleElite Dangerous Fleet Carriers Grounded For Six More MonthsNext ArticleBattlefield V – War in the Pacific Official Trailer 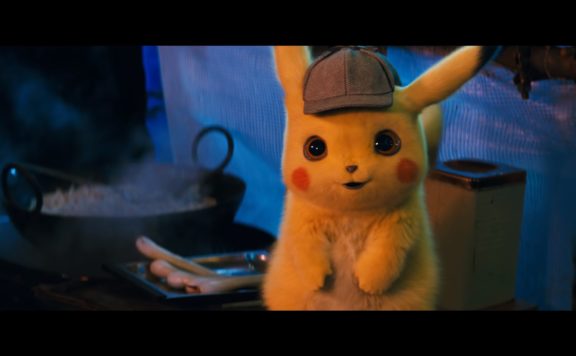 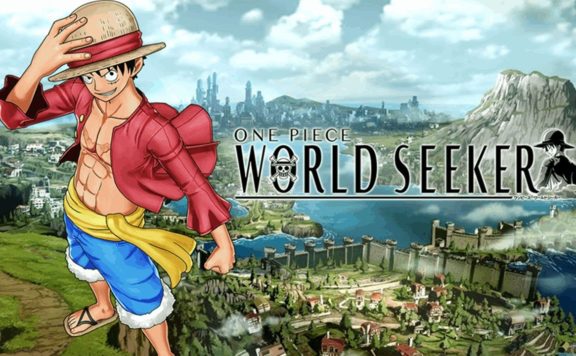 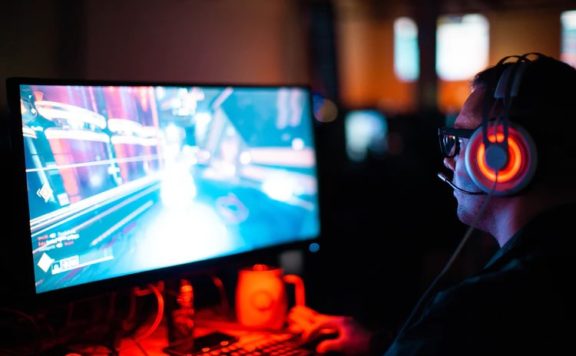 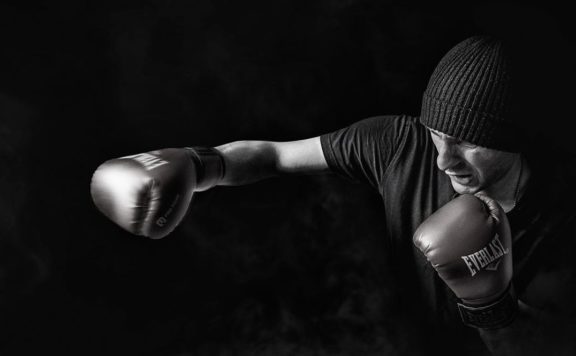 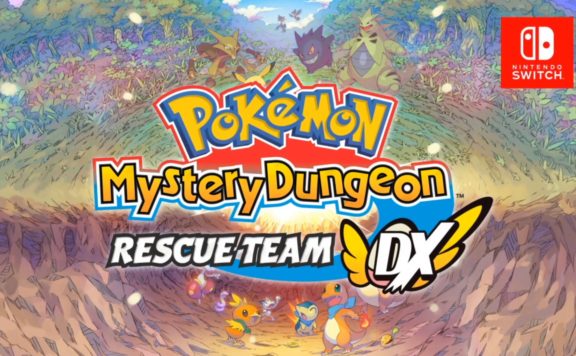 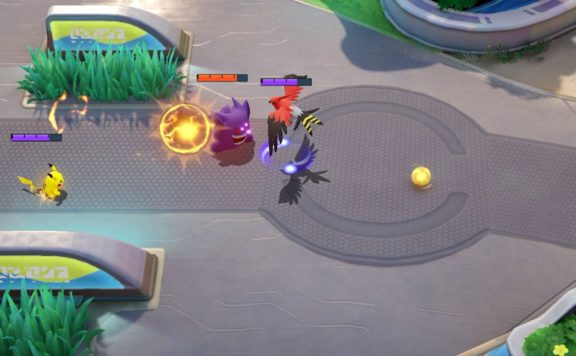