In an age of gaming that seems hyper-focused on churning out titles that we keep referring to as ‘Soulslike’, it’s nice to sit down and enjoy a game that brings us back to what we liked about video games in the first place. If you’re as tired as I am of the industry forcing mobile games down your throat (because don’t you guys have phones?) or you just want one blessed weekend where you don’t have to grind till your fingers fall off, then settle in with us as we review Inverge Studio’s Effie for PC.

Effie, you may be surprised to find, is not the name of our main protagonist, but of the little girl being told the story of the game. Effie begins by introducing us to the character of Galand, an older man with a dwarf-like figure that recounts the tale of a young hero who was cursed with old age by a witch for his laziness. If you weren’t aware of it by now, it should become incredibly obvious that that young hero is actually Galand, when you control him throughout the story. 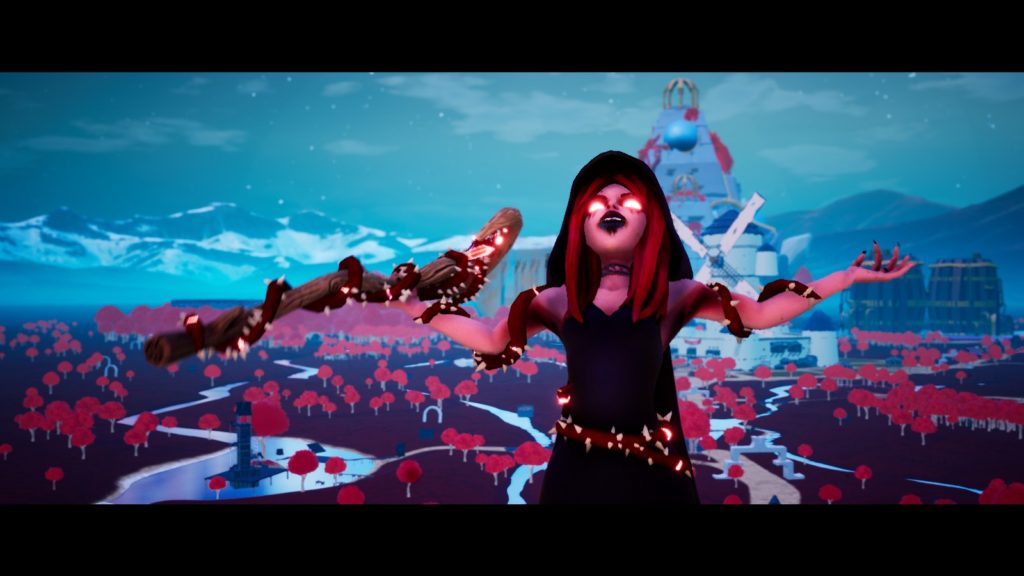 Galand traveled far and wide before coming to the temple of the Elder Protectors. They were his only hope of regaining his lost youth. You navigate through the ancient temple as Galand, jumping from platform to platform and collecting strange Runes as you search for these Elder Protectors. Unfortunately, when you do find them, you now must prove your worth. How are they to truly know that you have a kind heart and are worthy of their help? The realm of Oblena is in turmoil, set upon by a powerful black magic that corrupts the land. If you are to receive the Elder Protector’s help, you must rid the land of evil. Sounds simple and straightforward enough, right? 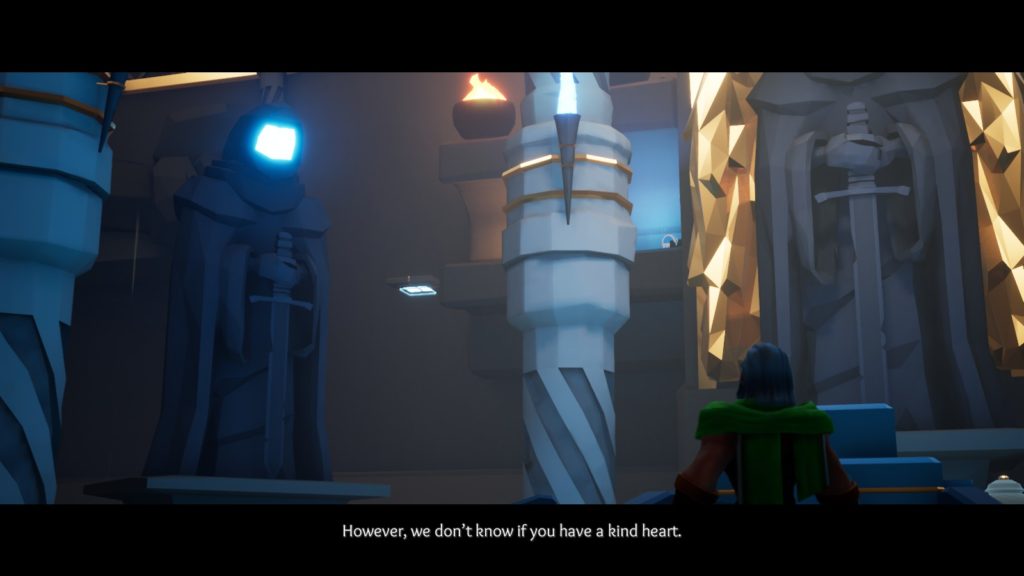 The first time I emerged as Galand from the temple, I was greeted with a wide forest of brilliantly red trees and flowers contrasting with a bright blue sky. The color palette of Effie‘s world is absolutely stunning. 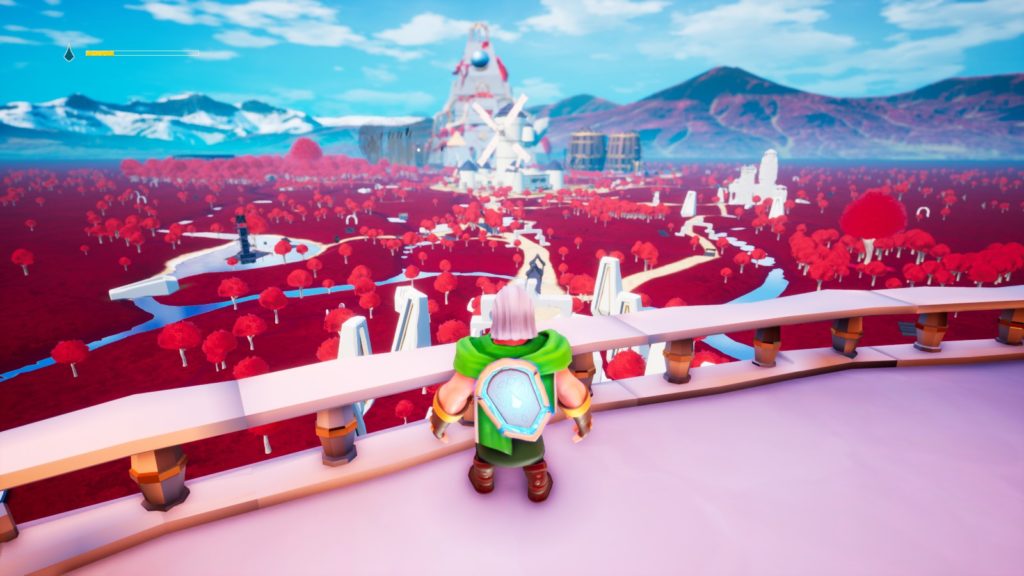 To better equip you to traverse the world, the Elder Protectors bestow upon you a magic shield named ‘Runestone’ that can also turn into a rad surfboard to get you across those long stretches of scarlet hills. 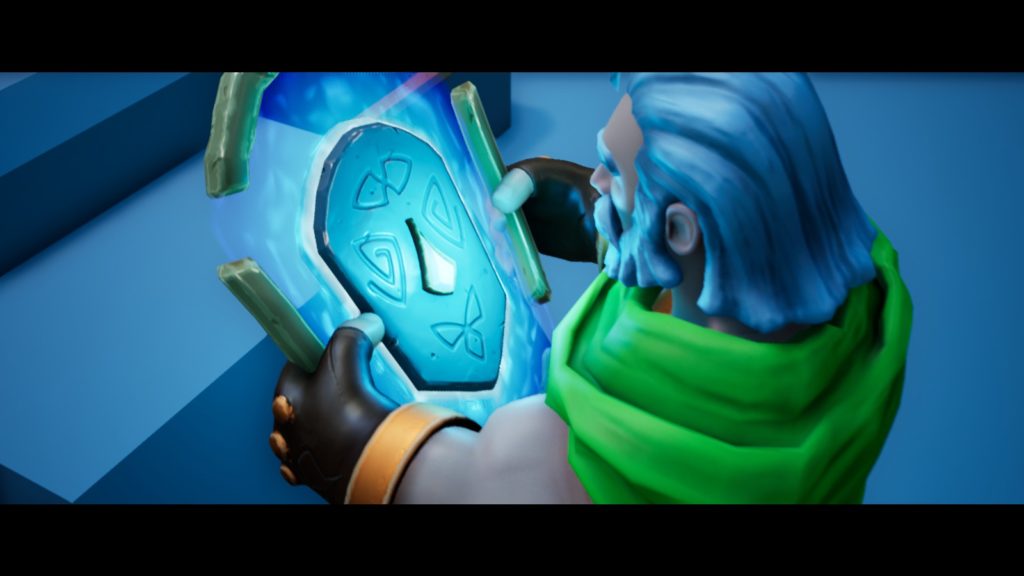 Luckily for us, there are some fancy beams of light that speed you up through the world. As nice as it is as a quality of life feature, I honestly didn’t feel like it was necessary. I kind of found myself wanting to take my time in the game, not speeding up. 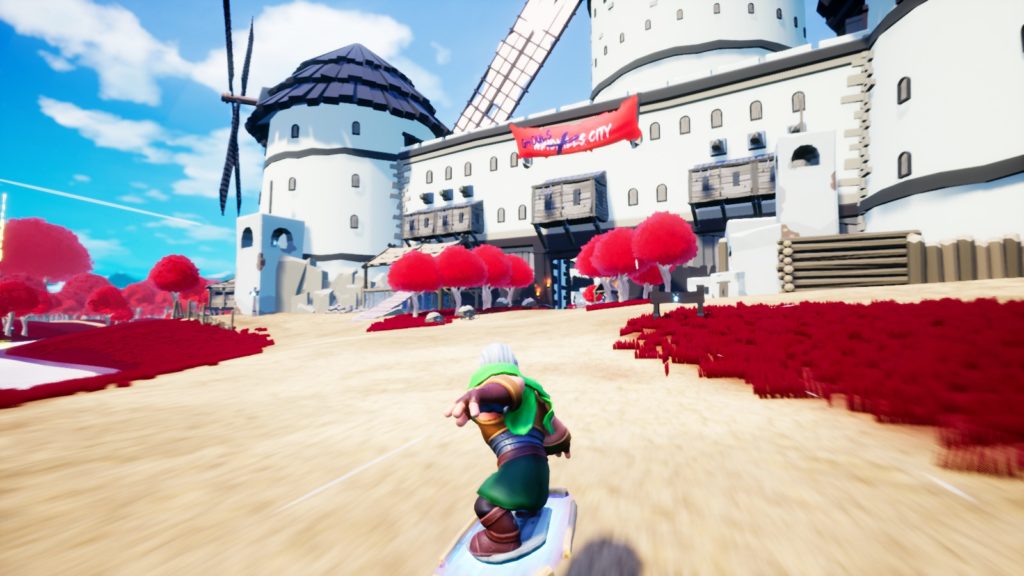 Effie  is extremely vibrant and packed with tons of color that makes the world feel that much more alive-why rush through it? Surfing on Runestone is a relaxing mechanic and might have extended the playtime of Effie if just left to its devices.  Even the calming, ethereal, background music hints at a serene experience. Just enjoy it.

On the topic of navigation, let’s talk about physics and movement in the game. The animation cycle for running is comfortable enough and doesn’t feel too awkward. If you run into the various vases and pots scattered throughout the world you can tip them over. But what about ledges? Eventually, you get access to a double jump and an ability to grab onto ledges, but even then there are some ledges that evade you. 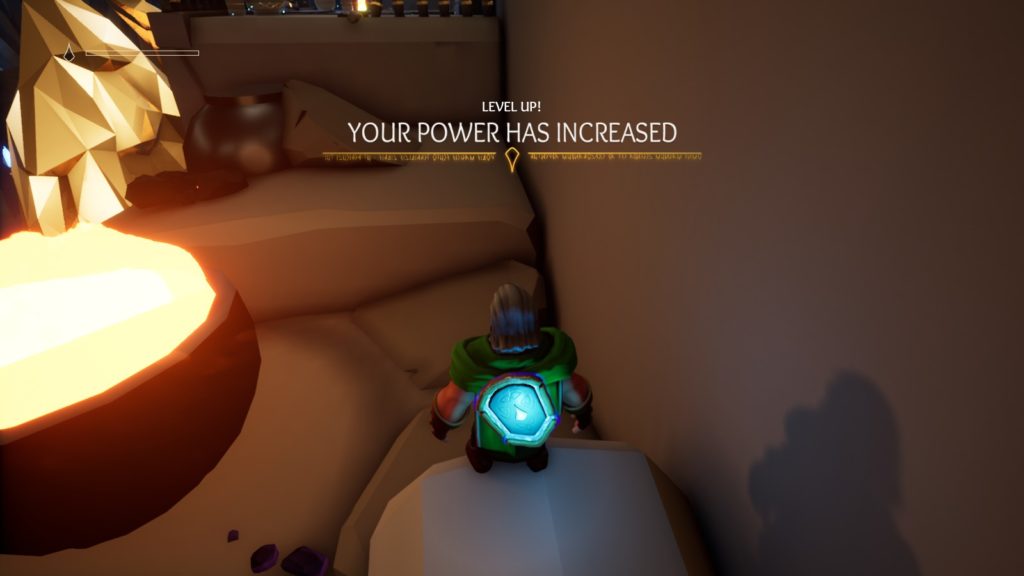 This little friend, is an example of a ledge that you can double jump to get across to. No big deal. However, there are some rocks that you just…slide right off of. No latching onto the side or grabbing to pull yourself up. It simply wasn’t designed to be scaled (even though it definitely looks the part) so you can’t. This leads to a lot of trial and error when it comes to getting around, and can end up in frustration when you go exploring for Runes and Relics.

There are Runes you collect throughout the game that enable Galand to level up and increase his power. While this in itself is a familiar mechanic from games past, it only seems to increase your base attack power. There’s not a lot in the way of customization for Galand’s abilities and you’re just kind of along for the ride when it comes to his skills. You’ll get them eventually when you defeat bosses in the future. 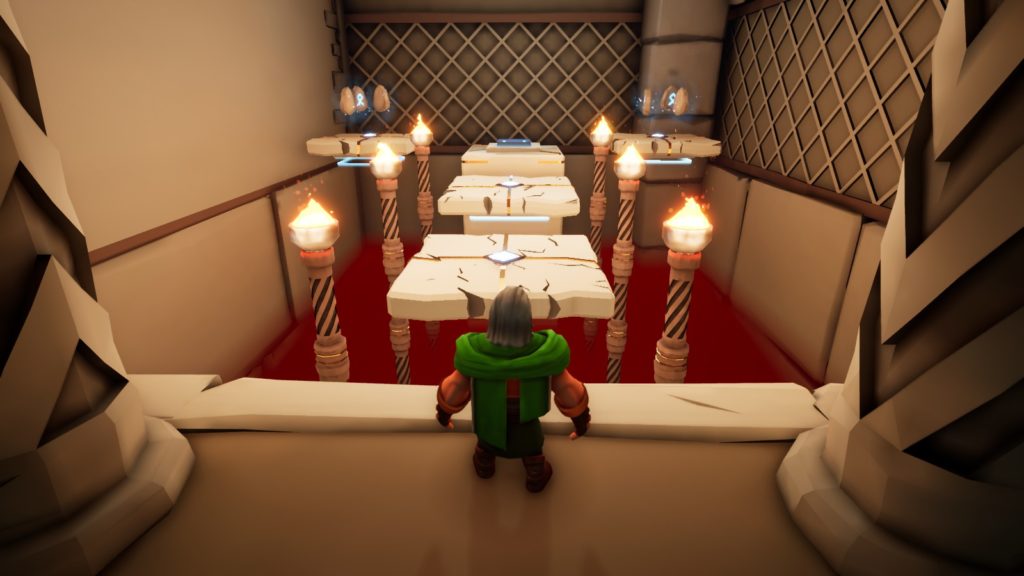 In addition to Runes, there are rare golden chests scattered throughout Effie that contain Relics. These Relics offer you a boost in power as well as an interesting lore tidbit. Collecting each or all of the relics reward you with Steam achievements (woo!).  I am personally a huge fan of finding secrets, hidden lore, and collecting achievements so this was plenty enough incentive for me. Beware however, if you leave an area and don’t collect its Relic, you won’t be able to reclaim that chest at a certain point later in the game. 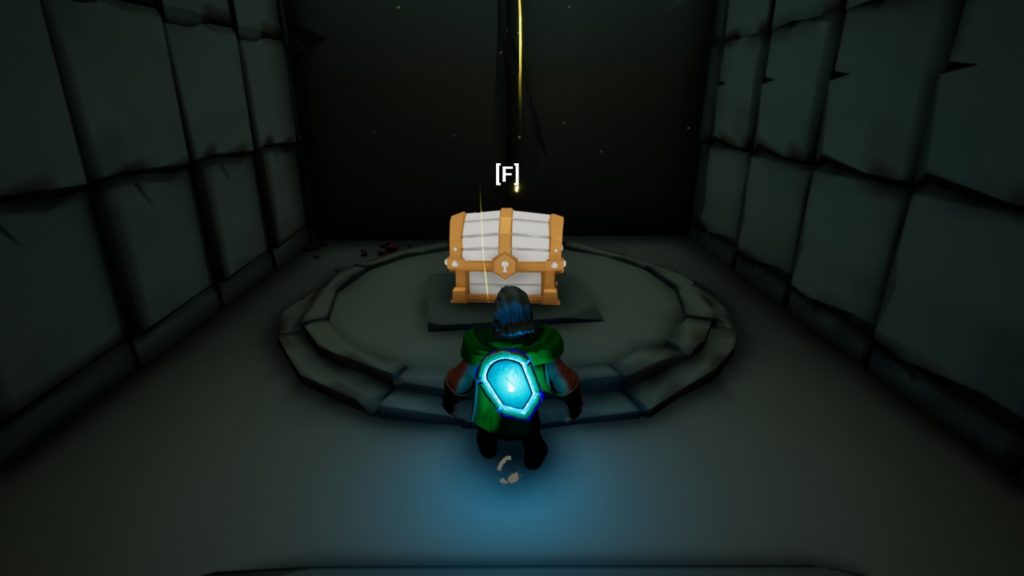 Fighting through this world, however, left a bit to be desired. You have two main attacks: light, and heavy, for dealing with bosses and dark creatures throughout Oblena. You can also block certain attacks with your magic shield.  When you arrive at the first boss, you will have unlocked your double-jump, and dash skills which make combat feel much smoother. 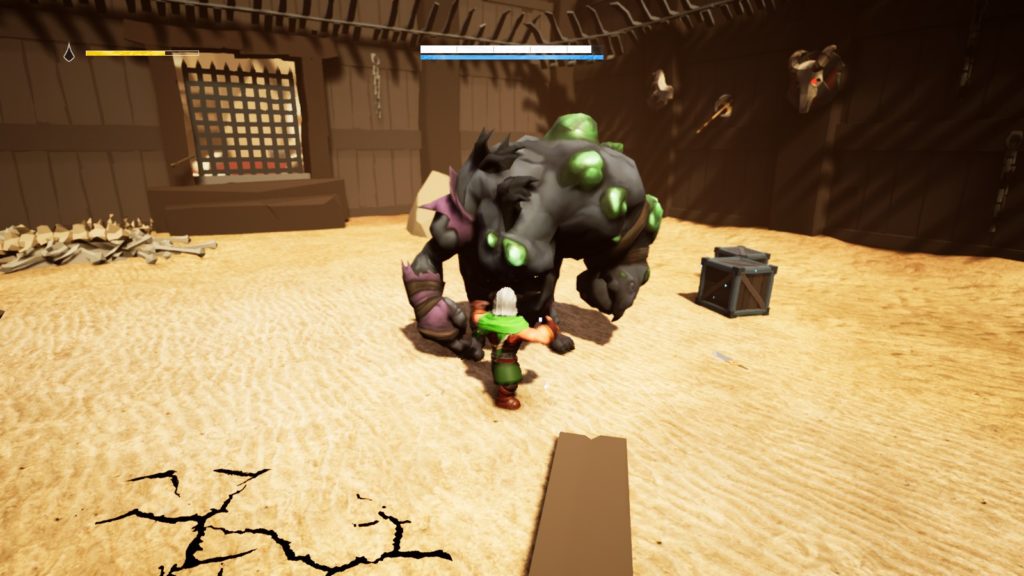 Personally, I would have preferred that you just start with double-jump and dash as basic mechanics. Navigating the lengthy tutorial with small fights here and there felt empty without the use of some kind of movement skill. 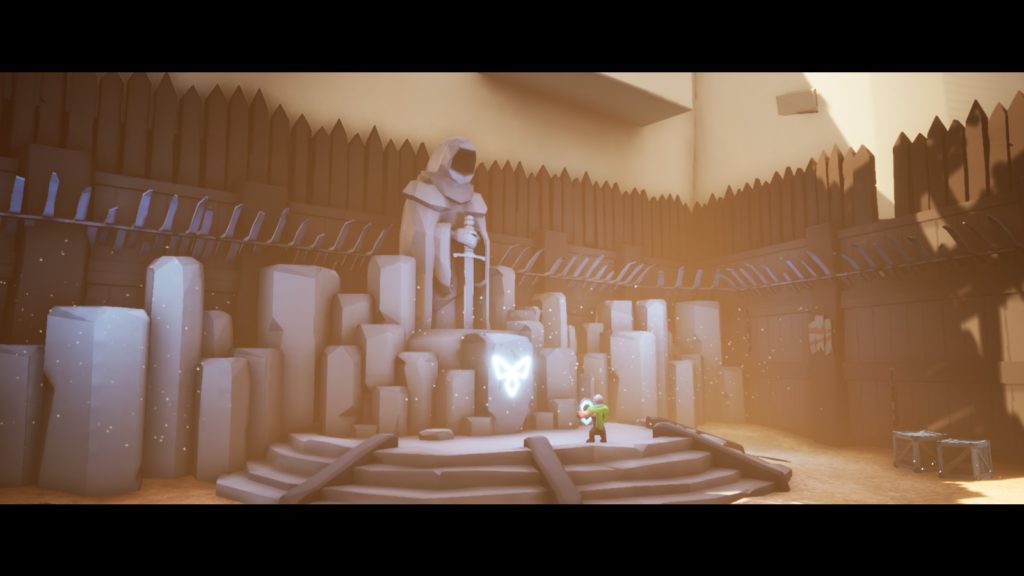 Let me air my grievances with the tutorial combat for just a moment. Initially-there is none. You are in an ancient temple, surrounded by dozens and dozens of pots, and because you don’t have Runestone yet you cannot break them. It is only until you make your way to the Elder Protector’s chamber that you can break the pots for some additional health during battle. As someone who breaks every single pot she sees in a video game (I blame Diablo and Zelda) the buildup to this was incredibly frustrating.

Yeah, yeah, I get it. Pacing of the game.  Introduction to basic mechanics. There needed to be a buildup to the shield for the story but couldn’t you have at least let me use my fists?? Needless to say that there was no pot left unbroken after I left that chamber.

Effie’s entire premise is charming and nostalgic. It doesn’t pretend to be anything other than what it is, and that’s a comforting notion. However, there still seems to be some dissonance when it comes to the core mechanics of the game. The platforming is pretty satisfying-there are a few leaps that make you nervous, and the controls feel pretty good, but even with Galand’s power increase from Runes, it doesn’t feel like there is much in the way of progression.

The leveling up system just doesn’t feel impactful or genuinely needed. In fact, I’d argue that you could have just left it aside, and increased the difficulty of bosses by introducing more mechanics that you would have to combat thanks to the new skills and tools you acquired from defeating previous bosses. That would give you some sense of accomplishment and forward motion, building upon what you’ve learned in the game. The bosses however fall a bit off to the side. There’s not much in the way of a challenge when it comes to the boss fights, and I didn’t even need to put up my shield ability much.

Tags: 3D, adventure, Effie, rpg
Summary
All in all, I thoroughly enjoyed my time playing Effie. With a colorful world, creative story, and the witty dialogue from Galand narrating his own adventure, it turned out to be a fun and pleasant experience. Though the progression and combat system left me wanting, it wasn't enough to make me dislike the game. The problems that arose from combat led to feelings of boredom and monotony, that usually abated with the storytelling and visuals. Effie is definitely worth the price point of $19.99 USD on Steam, for the storytelling and graphics alone. Though it could have been just a bit better, Inverge has created a colorful work that you can come back to over and over again when you just want to relax and relive some of your favorite parts of earlier 3D adventure games.
Good
Bad
7
Good 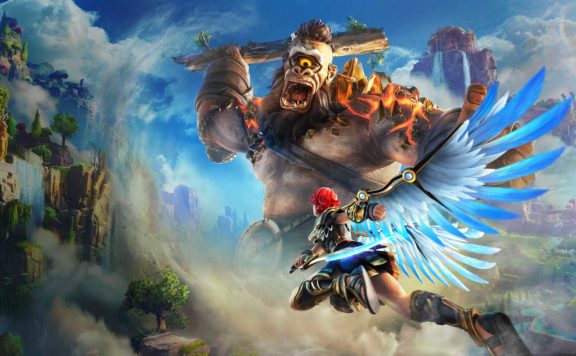 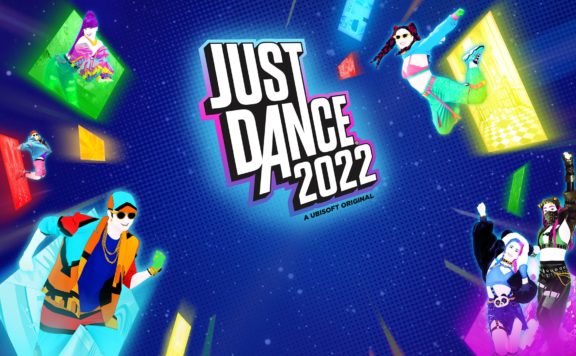 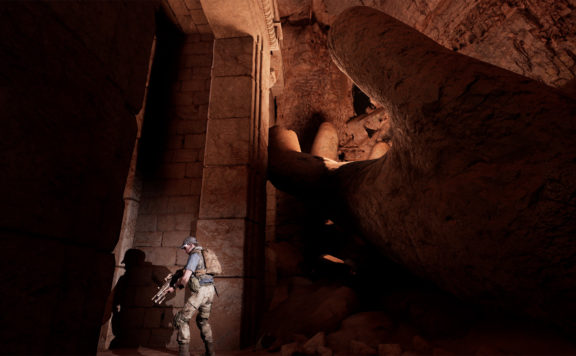 The Dark Pictures: House of Ashes – 20 Minutes of Gameplay with Commentary
September 15, 2021 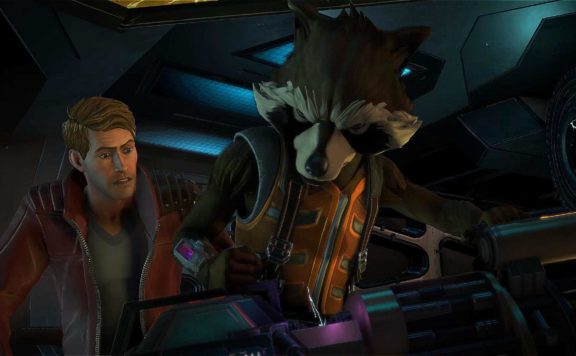 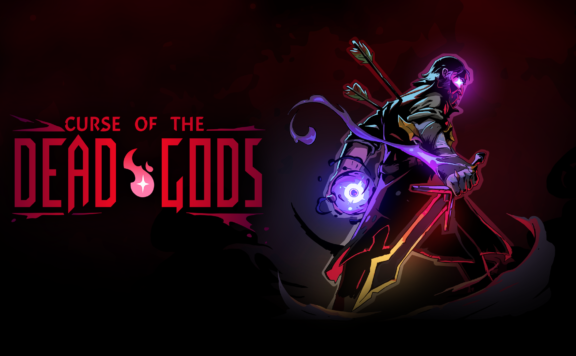 In an age of gaming that seems hyper-focused on churning out titles that we keep referring to as ‘Soulslike’, it’s nice to sit down and enjoy a game that brings us back to what we liked about video games in the first place. If you’re as tir...
0
Average User Rating
0 votes
Have Your Say!
Your Rating: 0
Submit
Write A Review
Genre:Adventure, RPG
Developed By:Inverge
Publisher:Inverge