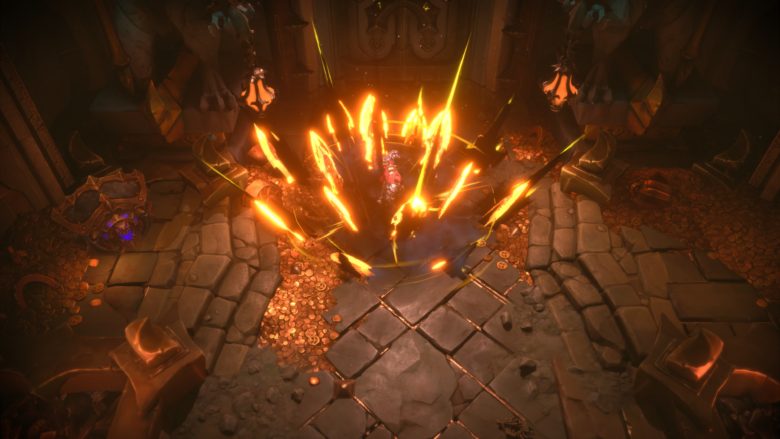 Darksiders Genesis brought some seriously dark times to one corner of EGX 2019 this weekend and we got the chance to go hands-on as Strife and War descended on this upcoming action title.

Following the fairly lackluster response of Darksiders 3, publisher THQ has wound the clock back for Darksiders Genesis. Following the escapades of the four horsemen and taking place before the events of the very first Darksiders game, this is something of a different take on the nether realms of these four fates. Developed by Airship Syndicate and taking a top-down view, Darksiders Genesis is an ARPG title that gives players a glimpse into the earliest days of the Nephilim. Following their creation and the destruction of Eden, War and Strife are sent on an assignment by the enigmatic Council. In order to maintain the balance between good and evil, they must hunt down the demon lords of Hell and foil the intentions of Lucifer.

It’s not entirely clear where our hands-on jumped into the action but with no knowledge of what Lucifer was up to, I’d say it was near the beginning of this game. A brief trip into the underworld dropped us into an overview of an ancient dungeon. The crumbling ruins of and lava flows that greet players aren’t entirely dissimilar to footage we’ve seen from games like Torchlight Frontiers. While the UI and character design are distinctly Darksiders, a similar aesthetic design flows through both titles. While dungeon crawlers like Diablo 3 have a grittier feel, this lighter touch certainly makes the game much more inviting without undermining the scale and tone you might expect from this franchise. 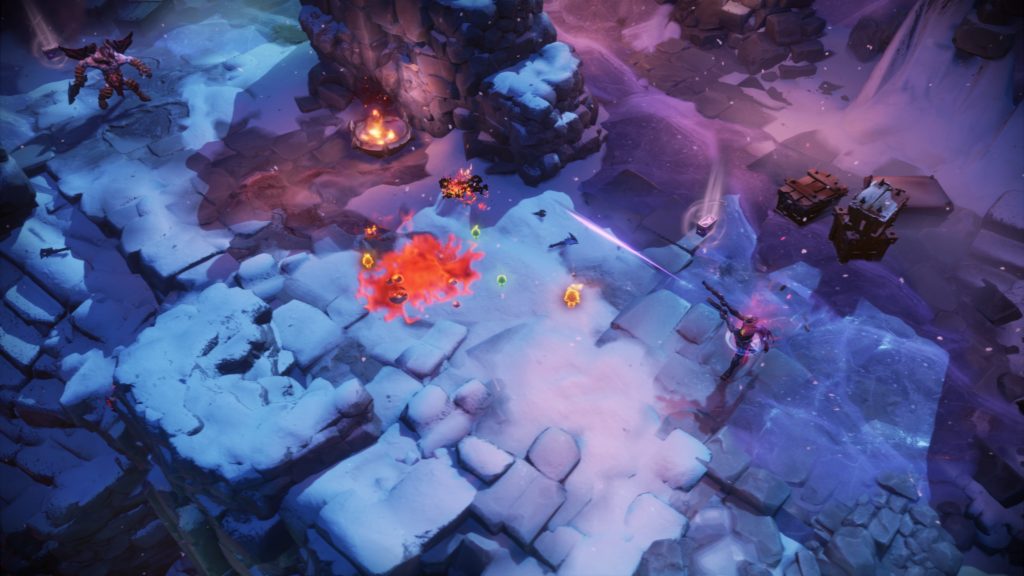 Having sat down and strapped in for a round of action, we initially took control of Strife. This horseman, who we saw in Darksiders 3, wields short-range melee weapons but primarily utilizes a pair of pistols. Each of these weapons has a primary and secondary attack and comes augmented by a range of items and enchantments. This arsenal of weaponry and enhancements provides a great range of variety in combat. Players can pepper incoming mobs with pistol fire, unload a shotgun charge, drop caltrops, and slice up anything that gets too close for comfort. This range carves out some variety in combat but can make getting to grips with Strife and War a little cumbersome at first. Strolling down the opening corridors and blowing away faceless enemies is relatively straight forward, but squeezing in enhancements, like explosive caltrops, into live combat makes for a few unintuitive combat maneuvers that might otherwise have benefited from a radial menu and a pause in the ongoing combat. To add to the satisfying level of choice in combat, players trying to take down Angels and Demons can swap their player character between Strife and War. Each of the two Nephilim possesses their own set of combat skills, item enhancements, and abilities. These allow players to tweak their approach in several ways. For example, War not only has the option of tagging enemies with a ranged throwing weapon or he can reel in victims for a close-quarters taking down picking potential trouble makers off one at a time.

Once we got the hang of Strife’s range of buckshot and knife-wielding ways, War made an entrance. Hot swapping from Strife to War is where things really start to get interesting. With an assortment of different enemy types and at least two mini-bosses in the playable demo, it became clear that War and Strife are suited to vastly different scenarios. While Strife is excellent at ranged engagement, it is far more useful to swap in War as things get up close and personal. War, who wields a massive melee weapon and his own health pool, can slice through anybody unfortunate enough to get in range. War is a mix of heavy attacks, pulls, and massive melee knockbacks that proves fantastic for dropping on clutches of enemies. With so many elements to combat, its as if the designers couldn’t help themselves by throwing in finishing moves too. Decimate the enemies that litter a corridor and you’ll get an opportunity to smash the finisher button and drop a bunch of loot for your coffers. 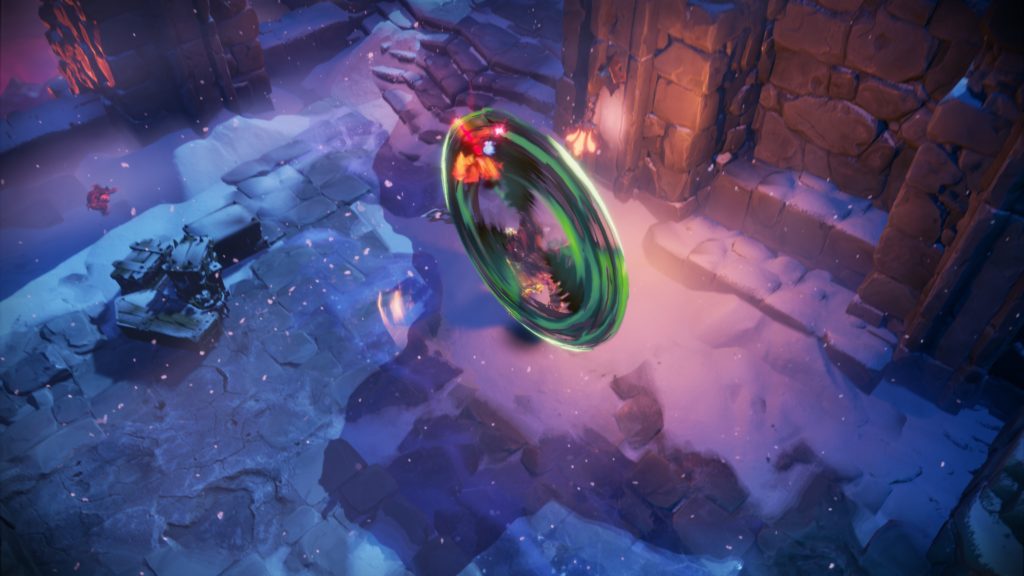 Thankfully, this vast range of on the fly combat actions is not nearly as intimidating as it sounds. Much of the game follows a relatively well-worn ARPG control scheme. Movement, aiming, double jumps, dodge, and applying healing items all map easily to a controller system. Camera controls felt missing, but they may very well have just overwhelmed the crowded controller. Despite this, it would have been a nice addition. As a final control niggle, mouse and keyboard combat was distinctly unfinished, with mouse aiming that just didn’t work the majority of the time.

Getting around each dungeon isn’t just about slicing through everything that moves. Hidden areas and the odd environmental puzzle can be found scattered around each level. We found plenty of switches that needed throwing and a couple of problematic doors that needed blowing up. The game even asked us to work out how to light up a bomb using the environmental rigging around us. None of this is particularly intensive and doesn’t really get in the way of the core dungeon grind. It does, however, mean that you’ll have to engage with the game every so often and stop smashing for a few seconds. Along the way, we also found it pretty difficult to get lost. I would consider this is more a reflection of the fact that THQ Nordic wouldn’t want me hogging a play session for hours at a time and we should see something a bit more puzzling in the final game.

As with any dungeon crawler, there is a ton of loot to pick up. The trash mobs and mini-bosses that we came across provided a range of shiny skulls and glowing orbs that all look likely to feedback into the game’s immediate action and ongoing progression. I was relatively unconcerned about the gold littered around this vault, and why would I be. War, Strife, and the other horsemen aren’t driven by the collection of mortal wealth. Instead, the drops that had most impact allowed players to regenerate health and overpower their attacks. Reach enough consistent kills and grab enough of a particular orb and it appears that the game allows you to start doubling down on damage. We didn’t exactly do the numbers but the effect is most obvious when Strife starts to rain down a hail of death upon his enemies. Offing mini-bosses also drops minor or major cores. These allow Strife and War to unlock additional perks via the game’s progression tree. 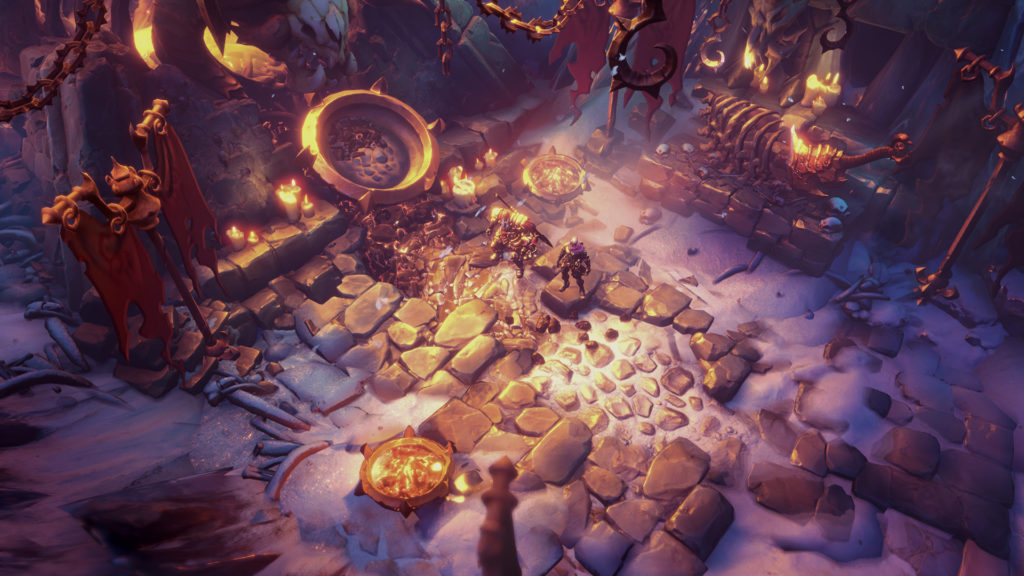 During the demo, this consisted of a core set of three shared bonuses and a branching tree system going up to 7 levels deep and providing a range of, mostly, passive damage and health buffs. As if that wasn’t enough, again, Darksiders Genesis has a collection system that ends up being useful. Taking a quick trip into the menu options, each of Strife and War have a dedicated collection. This mix of weapons, armor, provide a cosmetic add on and even drop the forementioned creature cores. It’s hard to describe how much flexibility Darksiders has after 40 minutes of gameplay. For a title that takes some well-worn gameplay, it sidesteps the obvious Diablo comparisons very well. Darksider’s latest title already includes a bunch of goals beyond the five required to escape Mammon’s treasure vault.

After eviscerating my enemies and taking down two very different mini-bosses, I stepped away from Darksider’s encouraged. After a relatively flat outing in Darksiders 3, this change of pace looks on course to impress. Some fun combat, a diverse playstyle, and a tone that will resonate with fans of the franchise make it worth a look. Get ready to go to War and cause Strife by checking out the full details on the official website. Darksiders Genesis hits PC, Xbox One, PlayStation 4, Stadia, and Nintendo Switch later this year.

Scarf Is Out Now And This Heartwarming Platformer Is Better Than Grandma’s Knitting
December 23, 2021