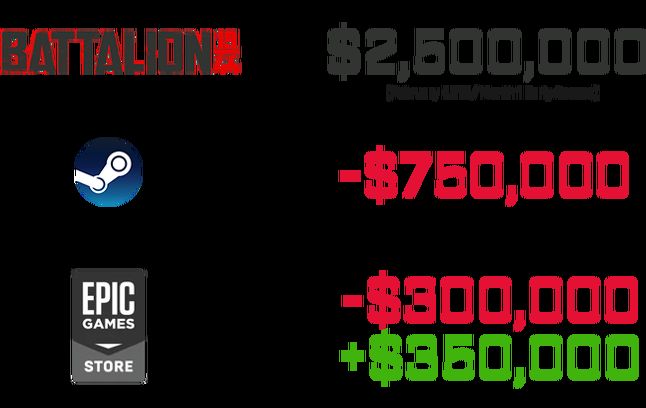 Joe Brammer, the CEO of Bulkhead Interactive, creators of Batallion 1944, had written an article for GameIndustry.biz explaining why gamers should be excited about Epic Games Store even if they are avid users of its main rival Steam.

This year Battalion 1944 has been released into Steam Early Access and the dev team has been focused on working through the community feedback and tweaking the game according to it. If the game had been initially released through Epic Games Store and sold the same amount of copies, it would have meant extra $350k available for the game’s development due to the difference in the platforms’ cuts.

To quantify just what an additional $350,000 means to an independent developer, such a figure is equivalent to months of funding and running a studio; that’s a decent marketing campaign to bring in more players, an esports events and modding prizes, hiring talented new staff, or bringing in community managers to engage with the people paying the money. It’s huge.

Joe Brammer then acknowledges that the tools Valve has given to gamers have been misused to inflict damage on certain games through review bombing and other means.

It’s Also worth saying that the digital stores are absolutely entitled to a cut of the revenue. For years I’ve argued that Steam’s 30% cut was an appropriate proportion, but that was largely because there were no viable alternatives out there. But that is changing, and fast. Valve itself has acknowledged the need to adjust its revenue split, if only for the biggest games.

Check out the entire article on GameIndustry.biz.

Written by
Catherine Daro
While growing up in the wilds of Russia, Catherine learned to talk, write and game at almost the same time. You can follow her attempts at latter two at MMORPG.com and GameSpace.
Previous ArticleSins of a Solar Empire: Rebellion – Minor Factions DLC AnnouncedNext ArticleThe Princess Guide Launch Date Revealed