Greedfall is the latest project of Spiders, the studio behind The Technomancer, Mars: War Logs, and Bound by Flame. From the earliest gameplay and story reveals, the project was slated to be a new heir to Bioware’s legacy of party-based RPGs or a younger sibling to The Witcher saga. An immersive fantasy world, party-based gameplay, and a core roleplaying experience – what else do you need in a recipe for greatness? Check out our Greedfall review and find out!

The events of the game take place in a fantasy world inspired by the period of Renaissance. Just like the similar time in the real world, this period is very controversial in its contents in GreedFall: advanced technology, cultural revolution and formed ideological and religious schools stand on the same ground as using magic, practicing slavery, using living people in scientific experiments, sending out the Inquisition to unroot the believes you disagree with and the general medieval-like ignorance of views.

Players take on the role of De Sardet, a newly appointed diplomat of the Congregation of Merchants, sent to a mysterious island of Teer Fradee (sometimes also spelled Tir Fradi) in the search of cure for Malichor – a deadly disease ravaging the continent. You will hear a lot about Malichor – but you won’t really see it in action and thus the thought of this threat will flee you at the sight of the first giant boss.

The island is being pulled at and ripped apart by a variety of factions, each with their own agenda. With the relations growing sour on the shores of Teer Fradee, you will need to thread carefully to not plunge your faction and the entire island into an all-out war.

On your journey, you will meet characters who belong to those different factions, and some of them will decide to accompany you and aid in your search. Generally saying, doing a favor for your companion will improve your standing with their respective faction and vice versa while at the same time possibly souring the relation with the enemy faction(s). 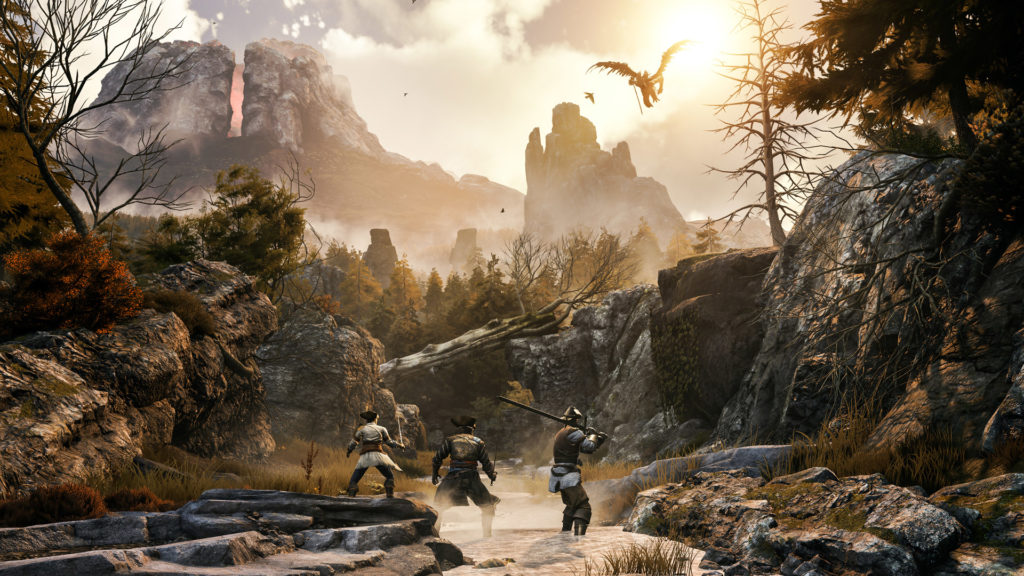 Additionally, you can also Block or Dodge melee attacks from your opponents (Magic/Ranged attacks can’t be Blocked, but can still be Dodged). There is a variety of statuses that can be inflicted both upon you and upon your enemies: Thrown, Unbalanced, Stunned and so forth. It is entirely too easy to be stun-locked by a large group of enemies and rapidly killed off.

With certain ability points acquired, you can also set up a variety of traps (Poison damage, Elemental damage, Stasis, etc.) or throw vials of the same categories. You have 12 quick action keys that you can attach abilities or consumables to. 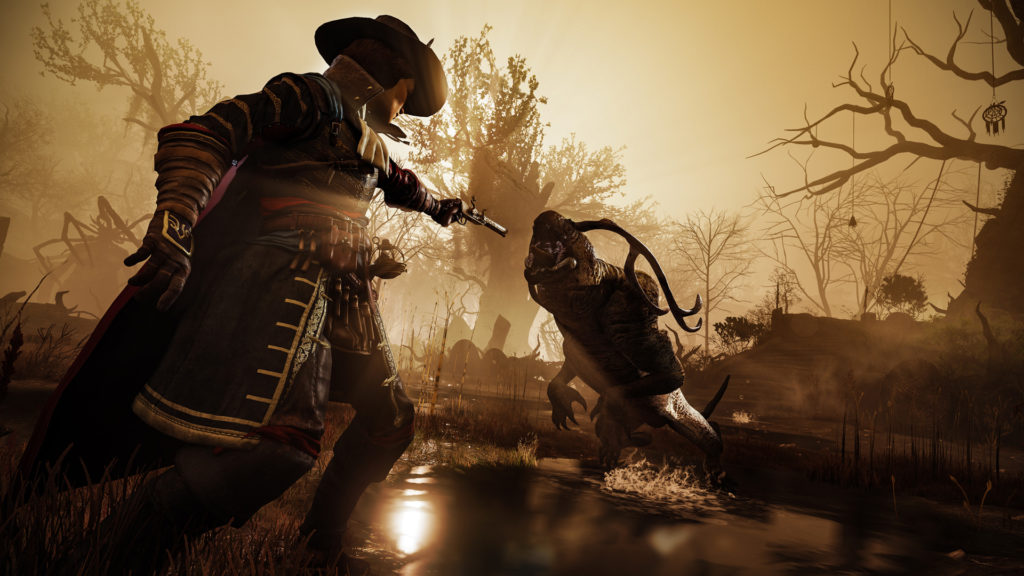 All characters, including De Sardet, have a certain amount of armor. Magical attacks ignore it while Fury-empowered strong moves reduce the overall amount of it. Attacking an enemy with no armor deals increased damage.

When it comes to bosses or groups of strong opponents, the entire system turns into a simulator of somersaults. Firearm, dodge, attack, dodge, use Fury, dodge, firearms… and so forth. I have not minded the combat system and overtime started taking pleasure in executing it well but some of my friends have hated it with a passion since trying out the game.

The thing that mildly annoys me in the game even twenty hours in is the general progression system. You get three separate options to level – abilities (a point is added each level), traits (every three levels) and talents (every four levels). Talents such as Intuition and Charisma add additional conversation options in dialogues, while Vigor and Lockpicking provide you with more ways to interact with the world: open locked chests and doors instead of looking for a key, scale a wall that less agile character would have to look around and more. The same tree provides options for Crafting and Science, required to upgrade your gear and craft potions/traps/vials and so forth respectively.

From the point you start getting talents, you get a distinct point that you are already falling behind. Of course, if you want to have extra dialogue options, you will start by adding a point into Charisma (which is all but required in the game anyway) and Intuition. The second you set outside on Teer Fradee, you will run into crafting ingredients and locked chests everywhere. Being able to craft your own ammunition (2 points in Science) and potions is almost a must as vendors feature a finite stock. 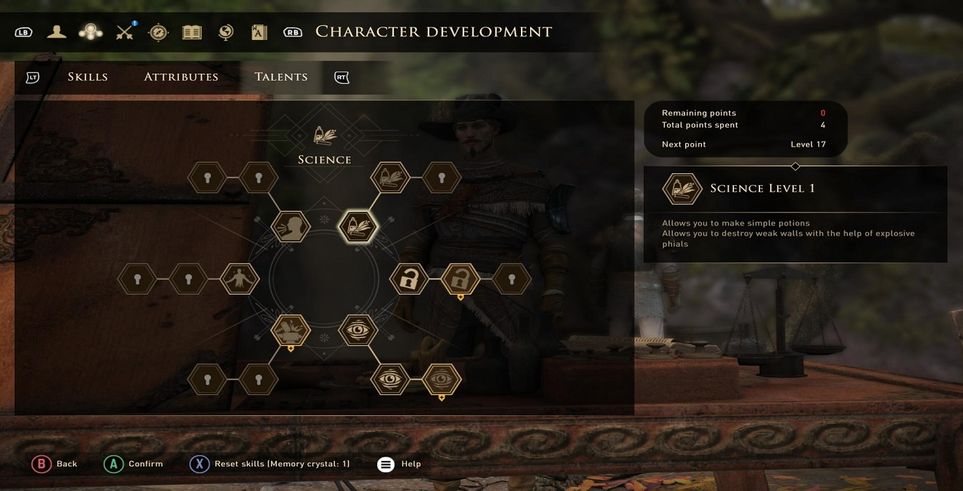 The blacksmith in New Serene (your starting hub on the island) can provide you with crafting services for extra gold – but it won’t be cheap and with all the bribing you might want to do, you will need the gold for other stuff.

Finally, after putting a point or two in every tree (I only skipped Vigor), you will find that you’re falling behind on Intuition and Charisma which don’t work out as much anymore, and the chests suddenly require Lockpicking 3.

The whole system left me with an unpleasant feeling of always catching up.

In a way, it is indicative of the progression in other parts of the game, such as quests and companions as well. In the Companions trailer, Spiders warned us that not tackling your team’s quests in a timely manner might lead to the companions leaving your party, offended at your tardiness.


Guess what those very companions do the second you set foot on the island / meet them? Correct, they give your their personal quests. And I mean long chains that will take you through a number of locations and have you talk to an obscene number of people. You can also really be on a single companion quest at a time – if you have already offered your help to one of your teammates, the rest of them might refuse to speak to you “while you are busy” – until you put the matter to rest.

By the time I was finally done with all the quests my Companions have provided me, I decided to venture out for side-quests and exploration before tackling the main quest, knowing that it would mean more personal quests and rushing around.

The game features 5 recruitable companions, one for each existing faction outside of your own. Unlike your own protagonist, you have no way to change their abilities or set up their behavior. In fact, besides talking with them and changing out their gear (the better they know you, the better gear you can get for them), your ways of interacting with your team is very limited.

Bringing along the companion of the corresponding faction can provide you with additional ways of handling a quest or maybe even offer a shortcut while having a companion of the warring faction might ruin the quest completely (alongside with everyone’s relationship with you). However, that does not happen all too often – mostly, only during the main quest chains and personal companions’ tasks.

Otherwise, companions usually silently trudge behind you at a great distance and rush into combat when you do. There have been a few dialogues I’ve heard out in the open world, but they were few and far in between. 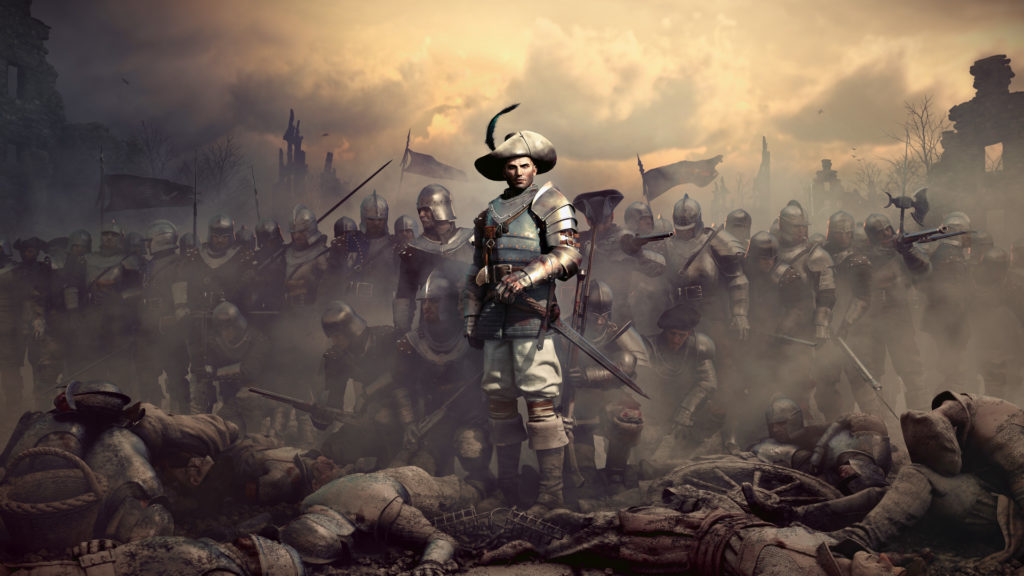 I have not run into many technical issues with the game besides getting stuck in the bushes every now and then. However, the few times I did, while not game-breaking, did spoil the game for me quite a bit.

It seems the game has a certain path in mind for the player, an order in which events and quests are supposed to take place. Thus you can happily quest away with the natives being called on ol menawi for a few hours, only for your character to suddenly randomly ask during one of the quests what does that mean. Obviously, the developers have planned that quest to be encountered way before I stumbled upon it.

Another thing is when GreedFall for some reason decides that De Sardet has triggered certain choices. In my very first conversation with De Sardet’s old teacher, I got an option to bring up the mystery of her mark – and had my character emotionally reveal information I have not unlocked yet. 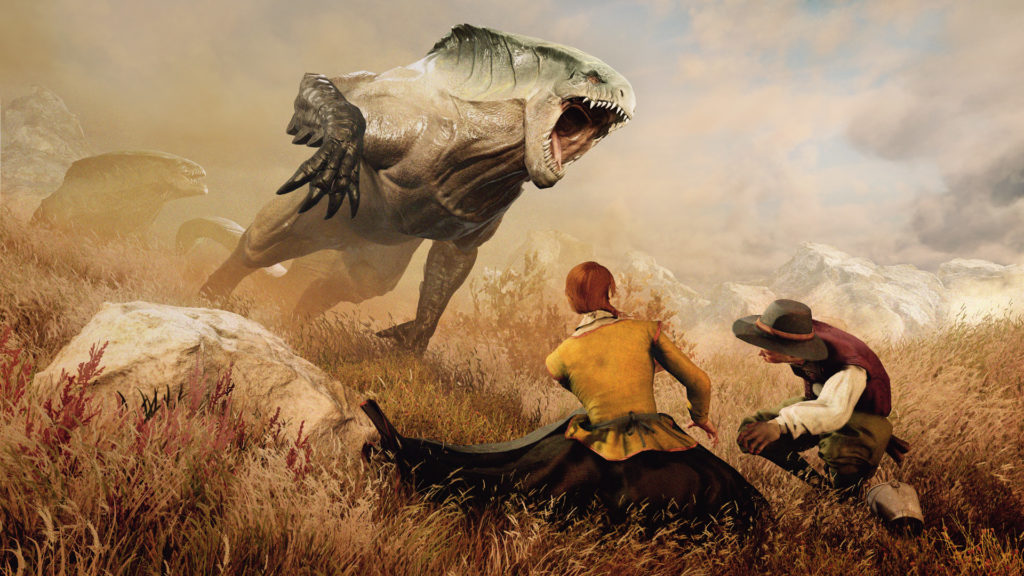 Similarly, I had a few Codex entries unlock that were obviously meant for later and have unveiled certain mysteries when I had not even encountered them yet.

While not a technical issue, all architects in the world of GreedFall need to be gathered on the island of Teer Fradee and sent out into the wilderness with no weapons or ways to fend for themselves. The plans of buildings, especially the Coin Guard barracks and the Governor house in New Serene, are a thing of nightmare – and I am usually not geographically challenged!

The game is a verified purchase by the author.

Tags: Focus Home Interactive, pc, rpg, spiders, steam
Summary
Like many first titles in a newly born series, GreedFall is a game that features a great idea with a flawed execution. At times, it feels that the game is unsure of what it wants to be and what exactly it wants to show to the players, which brings out its imperfections. I hope that overtime Spiders has a chance to iron out the identity of the game and manage to withstand the weight of the expectations that will now fall into their laps.
Good
Bad
7.5
Good

GreedFall is set in a fantasy world with magic, adventure, and 17th century weaponry. We’re looking for a very unique visual aesthetic inspired by Baroque art from 17th Century Europe, complete with grandiose sceneries and environments in warm, muted colors, and dark undertones. Explore a new world as you set foot alongside other settlers, mercenaries, and treasure hunters on a remote island seeping with magic, rumored to be filled with riches and lost secrets. A grand journey awaits as you find yourself in the middle of ever-increasing tensions between the invading settlers and the locals protected by supernatural beings and manifestations of the island’s earthly magic.
7.5
Average User Rating
2 votes
Have Your Say!
Your Rating: 0
Submit
Write A Review
Genre:Action RPG, Role-playing, RPG
Rating:Mature
Developed By:Spiders
Publisher:Spiders
Modes:Single-player