Grime, the beautifully bleak platformer from Akupara Games is out now and while it took some time to escape the gravity of this new adventure, I finally managed together with my thoughts on this new adventure.

Dropping out of the void onto Stadia, and Steam on 2 August, Grime is the work of indie studio Clover Bite and a unique idea for a twisted platforming title. Set in an unknown realm where the title’s protagonist wakes without any memory surrounded by dangers. This sort of setup might sound oddly familiar, but the delivery is what makes Grime different.

It’s immediately obvious, when logging into Grime for the first time, that this eerie new world blends the familiar with an unsettling aesthetic. The rocky overhangs and shale platforms that usher players along feel worn into existence and almost unnervingly alive. The color palette is all greys and purples, drawing inspiration from the minerals from our own Earth and keeping the tone decidedly desolate throughout. Levels feel unsettling but still hauntingly beautiful and are superbly lit, giving deep chasms, untended deserts, and worn statues a menacing quality. 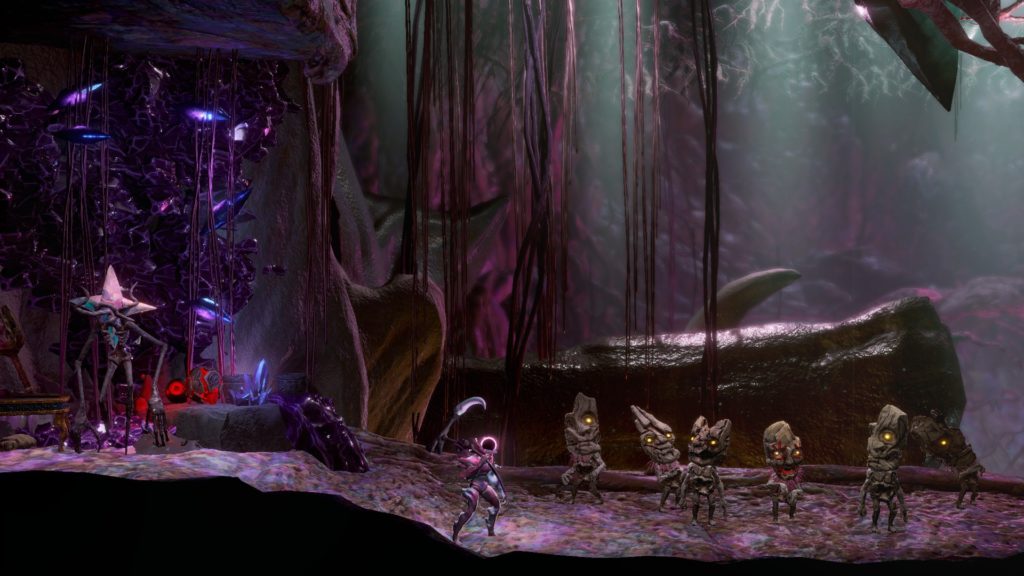 While plenty of traditional platformers use bright colors and chirpy music, like the recently remastered Zool, there’s no doubt that Grime is out for a slightly more stoic vibe. The sense of scale that is imposed upon the screen is further enhanced by the musical mood and odd tones pumped through speakers, making Grime continue to feel, not quite right.

This isn’t even where the deviations from the norm stop either. While Grime could easily add a few jumping puzzles and a fast-paced race against the clock, then leave it at that, Grime manages to mix in a number of different ideas. Rather than a traditional meat bag, Grime puts players in control of an anthropomorphic black hole. While faced paced platforms like Super Meat Boy are all about environmental dangers and epic leaps of faith, Grime is a more methodical 2D traversal and fits better into the action RPG genre.

Navigating monstrous levels, an unnamed and wordless entity clambers over and consumes this world. Mixing in an element of Souls-like combat, Grime allows players to dodge, attack, and defend against a mix of minor mobs and gargantuan bosses. Nothing about this is particularly troublesome and generally feels simple enough. In the end, it is your own timing that will kill you here, not the well placed deflect skill and the flexible in-game combat.

Adding you in these battles is an RPG style weapon, gear and growth system that leans heavily into the idea of consumption. Taking down enemies, destructible objects, and even defending against enemy attacks provides an opportunity to suck in matter in various fashions. Absorbing this world, as any good black hole would, provides the material needed to either heal from damage or upgrade a range of stats. In addition, this creature hunt, again playing into the Souls connection, adds a number of enemy attributes to player stats.

All in this leaves a ton of ways to play, from wielding a howling hammer to glaives and rock hard fisticuffs. It also provides a satisfying amount of character builds, and while I loved speedier options with lots of stamina, you might choose something else when the boss battles turn up. 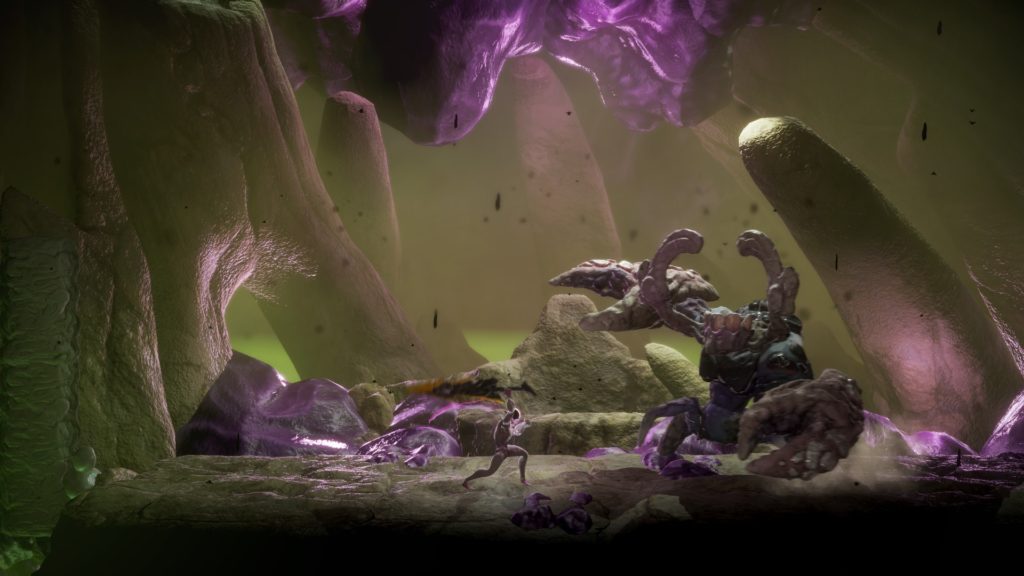 These massive end of level enemies are few and far between, largely coming after repeated trial and error on the satisfying difficulty range that Grime adds to its minor minions. From the huge multi-handed heads to the massive armoured Jawcrab, Grime excels in pushing players into interesting and inventive encounters that rely on trial, error, and good timing to take down and hoover up these massive obstacles. Like the rest of Grime, these are visually inventive and slightly disturbing, always feeling oddly proportioned and move in ways that feel just slightly unnatural, like watching a stop animation monster movie. While this definite dip into souls like territory means that players will try and die, boss battles never feel unfair. There’s a simple satisfaction to learning the cycles of each encounter and managing the limited stamina and health that you bring into battle. While I’d love to say that I’ve finished Grime before this review, I’m currently replaying towards the final boss battle, because sometimes things can still be arduous if utterly entertaining.

Grime is, much like its central character, an odd amalgamation of ideas, from Souls based RPGs, to platforming punch em ups, all oddly twisted into something that looks like a little nightmare all its own. If you’re looking for something different but utterly beautiful, then Grime is worth your time. Grime is out now and available on PC, Mac, and Stadia now.

Grime, the beautifully bleak platformer from Akupara Games is out now and while it took some time to escape the gravity of this new adventure, I finally managed together with my thoughts on this new adventure. Dropping out of the void on...
0
Average User Rating
0 votes
Have Your Say!
Your Rating: 0
Submit
Write A Review