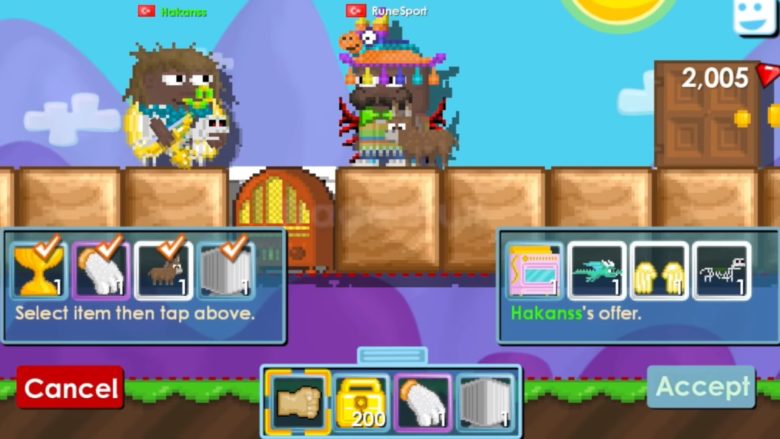 After a reasonable success on a multitude of platforms, Growtopia is coming to Nintendo Switch and it should arrive on the mobile platform on 18 July.

Growtopia is a rather inventive MMORPG. Acquired by publisher Ubisoft back in 2017, it allows players to take control and grow their own adventure. Take on wizards, join explorers, and assist superheroes all in the same game. Growtopia seems to hold huge potential for anybody with a will to match their imagination. Unlike the real world, however, everything that you could possibly want in the 2D pixel art world grows on trees. Everything from lava, to bricks, and jet packs can be crafted by breaking and building blocks, gathering seeds, and planting the required resource. This crafting component allows this particular title to eschew the idea of goals and progression. Much like other popular sandbox games, Minecraft being the most obvious comparison, this is all about your own imagination and encourages the player to build the world they want to see.

As an MMORPG, Growtopia allows players inhabiting the game to share their own creations with the rest of the player population. Gamers can enter the worlds of other players and even collaborate on building brand new experiences. Social tools and a range of guild features make it even easier to pool those resources and get building. For those wanting to consume, the game features monthly updates and a range of available quests for players.

After initially launching on Android in 2012, It eventually flowered onto iOS, PC, Mac, Xbox One, and PlayStation 4. Now, this game is coming as a free to play experience for Nintendo’s Switch console. We don’t have the pricing to hand right now but if it remains consistent with other platforms we can expect subscriptions and microtransactions ranging fro a couple of dollars to yearly VIP status that clocks in at above thirty dollars.

Are you ready to try out Growtopia or are the money transactions too much of a strain on your own money tree? Growtopida is coming to Nintendo Switch 18 July and you can find out more over at the official website now.

Written by
Ed Orr
For those of you who I’ve not met yet, my name is Ed. After an early indoctrination into PC gaming, years adrift on the unwashed internet, running a successful guild, and testing video games, I turned my hand to writing about them. Now, you will find me squawking across a multitude of sites and even getting to play games now and then
Previous ArticleDoctor Who: The Edge of Time Trailer Peeks Inside The TARDISNext ArticleLost Orbit: Terminal Velocity Review