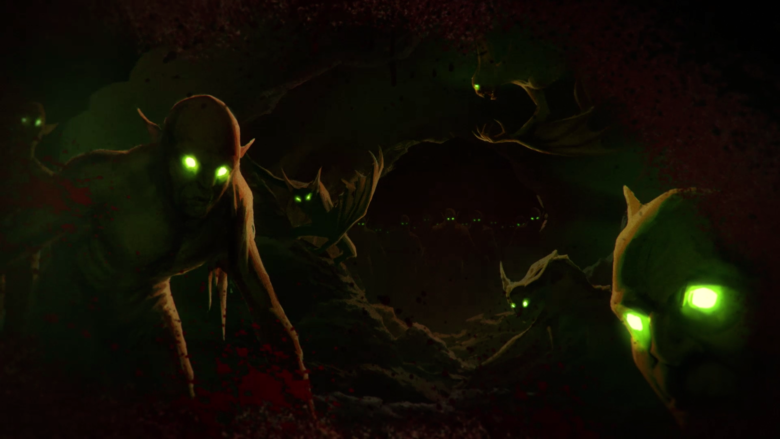 Vampires are no longer all the rage, so to speak, but their allure hasn’t ever really disappeared.  Their presence in the gamer zeitgeist is still inspiring for those who favor the mortally challenged, from the Warhammer Fantasy/Age of Sigmar universe to the more contemporary Vampire the Masquerade and similar games.  Immortal Realms: Vampire Wars has risen to haunt our Steam libraries, but is this blood-sucking feeding frenzy truly worth one’s precious time? Find out below – this is our Immortal Realms: Vampire Wars review!

I’m torn on my opinion of Immortal Realms: Vampire Wars.  You see, I am a bit of an undead aficionado.  Necromancy is my forte, and I thoroughly enjoy all things skelly.  That said, I have mixed feelings about Immortal Realms.  I want to start by recognizing that there are several established mythoi for vampires.  Vampire the Masquerade is a good example – it provides a lexicon and way of understanding how vampires interact with each other.  There is a sense of inspiration that VtM takes from other sources, but that’s to be expected.  Nevertheless, there is a limit, I think, to how much borrowing is acceptable before the game comes off as derivative and uninspired.  Immortal Realms skirts that line, with a character, for example, named Vlad, who rules over a clan of noble vampires, with a beloved vampiress with whom he cannot live.  If it sounds familiar, it’s because it’s been done and redone to final death.

That annoyance aside, I can say that as a strategy game, Immortal Realms looks good.  The designers did well at identifying what degree of graphical prettiness was appropriate for the scale and implemented it beautifully, with some exceptions.  Since the in-game cinematics appear to use the same models as on the strategy/tactical maps, the cinematics look kinda goofy at times.  The models, scenery, and even the audio are well designed and thematic, which means your foray into undead domination will at least be aesthetically pleasing.

The maps are also good.  Territories are separated by subtle, but discernable borders.  Each territory has a particular bonus or use attached to it, making the acquisition of territory a practical decision that can alter decisions dramatically, based on an army’s immediate needs.  Lord isn’t packing much of a punch?  Drop by the blacksmith and grab a magical sword.  Armies running low on bodies?  Well, there’s a keep or graveyard right around the corner that might do the trick.  Now, I say the maps are good, but I mean for the maps that are there.  Outside of the campaigns, for sandbox games, there are exactly four maps that I am aware of.  I played two of the sandbox maps, and they were huge, but even so, some variety would be nice.  I’d even take a random map generator, as one might expect in a grand strategy game similar to Immortal Realms. 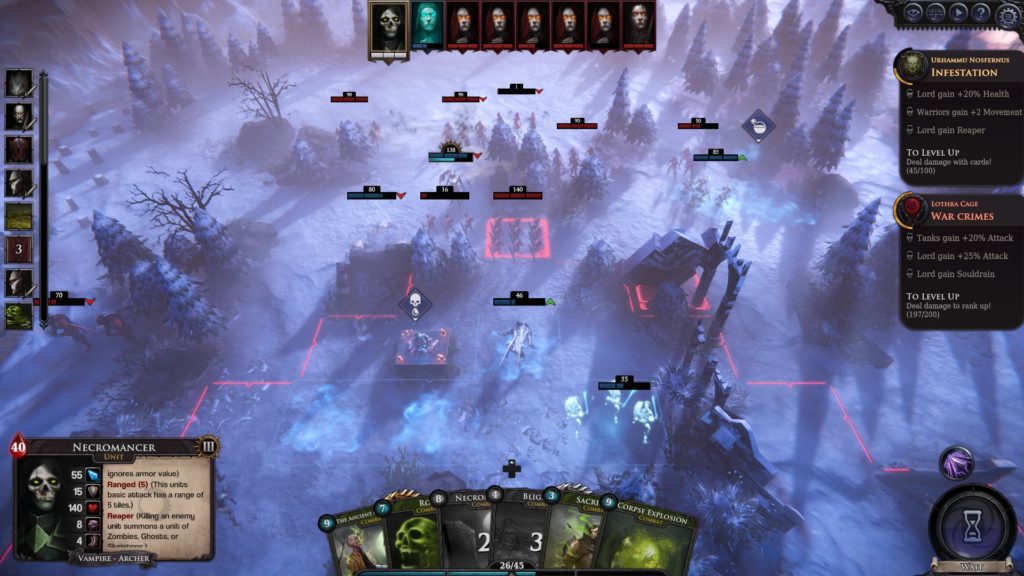 Maps offer starting locations for each of the factions.  Similar to the Total War series, there are major and minor factions.  Immortal Realms offers three major factions, the noble vampires, the wretched necromantic vampires, and the manipulative magic-user vampires.  Minor factions include variations of the three above factions, as well as humans and such.  I think Immortal Realms really lost out on an opportunity by limiting playable factions to the three major vampires, but I suppose that was a thematic choice.

Unit variety among the three major factions, as well as playstyle, vary substantially.  I found myself, unsurprisingly, favoring the Nosfernus for their ability to animate the dead and specialization in certain types of magic.  There are different schools of magic, in the vein of Warhammer Fantasy Battles, but recruiting additional vampire lords will be essential in unlocking those spells.  Speaking of which, although I’m not particularly in favor of the design choice, spells are pretty much limited to what a lord starts with in terms of options.  Those spells can be upgraded as the lord levels up, but still – if you don’t like what options the lord in question has, you’ll just have to deal with it.

The interface is fairly clean, and the number of clicks necessary to complete an action is relatively small.  There are some annoyances with figuring out if the context demands a right-click or left, or how to split or merge an army, but dealing with those issues wasn’t too demanding.  Generally speaking, I also knew exactly who had what abilities, and roughly what those abilities did.  The campaign was a great help in sorting through that mess, and I do recommend the tutorial to get you started.  To add to that, I have to say, Immortal Realms has a feature that I haven’t seen in a game in probably a decade – a game manual.  It’s digital and brief, but you know, it did a good job of explaining the bare basics.  It’s worth a look, even if just to see a relic of a bygone era. 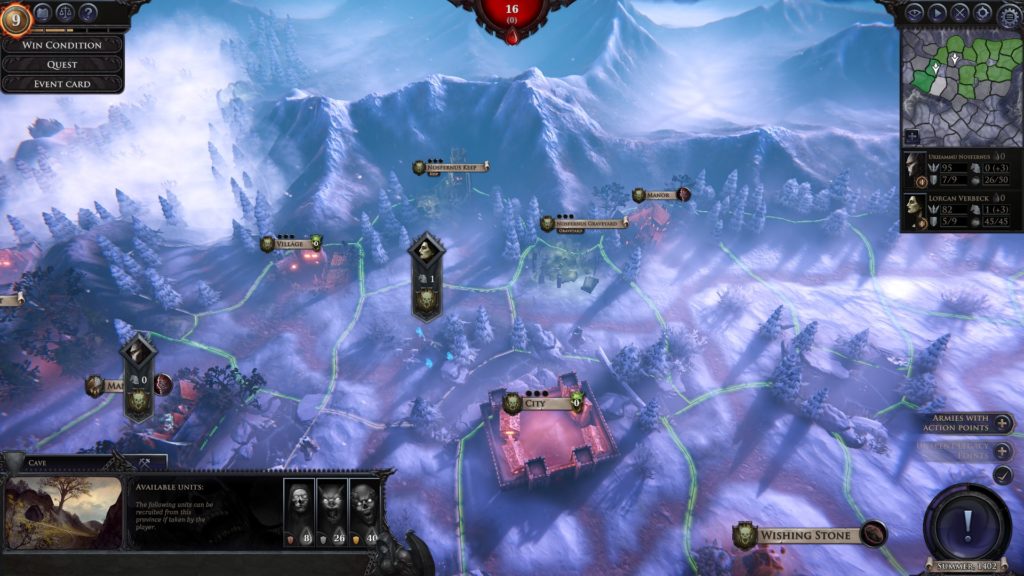 Nevertheless, Immortal Realms is let down by an accumulation of papercuts, rather than a single coup de grace.  That is, for all the things that work right and feel right, there are enough little things that draw away from the experience that the game doesn’t feel like it has lived up to its fullest potential.  Combats, although sound in theory, don’t quite deliver a thrilling or wholly satisfying experience.  The campaign maps, again although varied in individual layouts, lack a suitable variety in experiences to really make conquest engaging.  A lack of research options hamstrings the feeling of progression (although a bloodline experience tree tries its best to fit the bill.

Tags: Immortal Realms: Vampire Wars, pc, review, steam, vampire
Summary
Immortal Realms: Vampire Wars is not a bad game. It is, however, a game that missed its chance at greatness. I’m not smart enough to say what could have been different to really knock the experience out of the park, but the demerits listed above may provide a good starting point. Even so, it’s very much worth a try if you like marching armies of undead across the landscape, or if you really want yet another strategy game. I would be inclined to buy it, even if for its thematic elements, and I would very much like to see where the developers go in the future with this IP, but for the product in front of me, it’s an ok game.
Good
Bad
7
Good
Previous ArticleTwin Mirror Release Date And Pre Orders Are hereNext ArticleFallout 76 – Patch 22 Is Here!