Earlier this year, Gamespace had the pleasure of sitting down for an email interview with the one-man developer of In Other Waters, Gareth Damian Martin to learn more about his creative process and what it took to craft the mysterious underwater world. After completing the demo, we wrote a preview of our initial thoughts on gameplay and what we were looking forward to. Now, we dive once more beneath the murky waves to bring you our full review of the masterpiece that is In Other Waters.

Descent into the Unknown: The Mystery of Gliese 667Cc

A mercurial sea of turquoise blue as far as the eye can see. The closer she gets to the drop-off, the more my eyes shift frequently between the exo-suit’s oxygen and power levels. I’m not so sure that we can make this jump, but she is. She has to. And all of a sudden, I’m not afraid anymore. I need to know where I came from, and why this place has been kept secret. We’re in this together, so we descend. 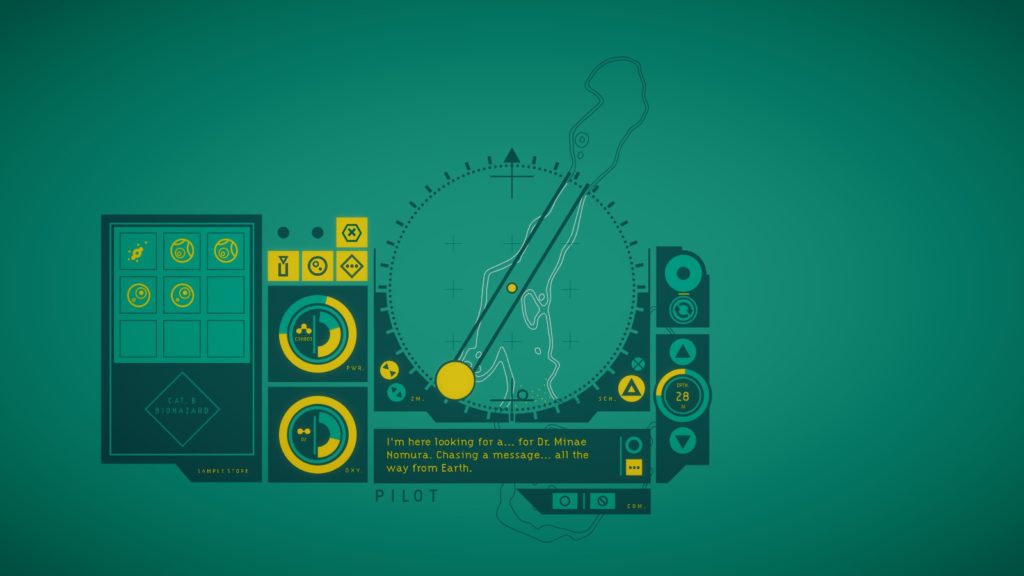 In Other Waters follows the xenobiologist Dr. Ellery Vas in her journey to find her companion and colleague Minae Nomura. You play the part of an AI in a high-tech dive suit, helping Ellery to navigate her way through the beautiful, but volatile waters of the planet Gliese 667Cc. All around you, you experience breathtaking extraterrestrial sights via Ellery’s vivid descriptions and log notes.

Relying on Ellery and the Suit’s Interface

The world of In Other Waters is vast, and to survive down there you’ll need to rely on each other and the ecosystem of this unique, thriving planet. From some of her first steps, you guide Ellery around ancient pillars buried deep within the swirling ocean dunes by way of a radial-linking navigation system. 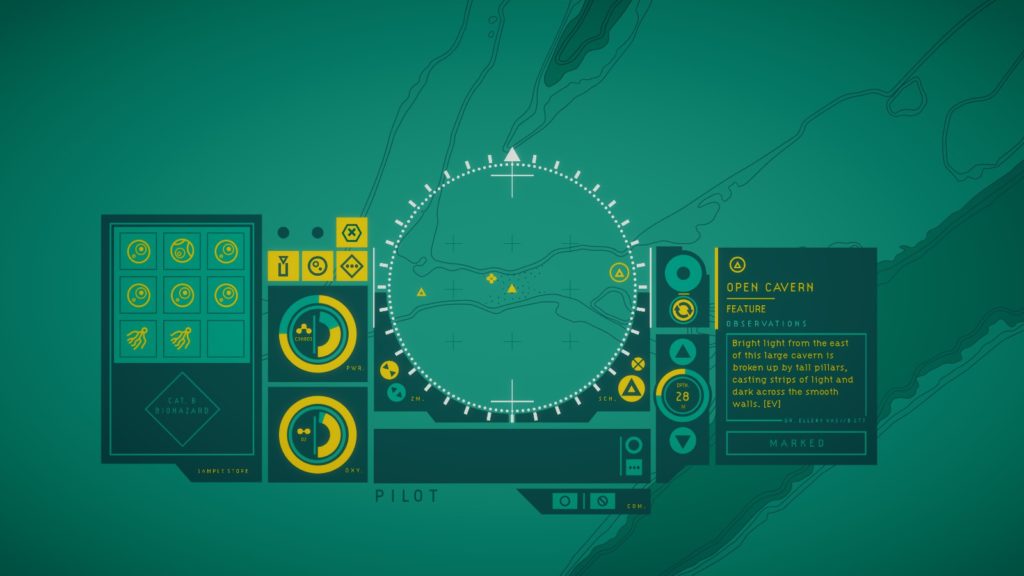 While you can’t see the alien creatures or truly experience the visuals of the world around you, Ellery makes up for it with her impressively in-depth and descriptive observations in her journal. Likewise, you guide Ellery through the dark unknown by scanning the depths and helping her avoid misfortune. While your relationship is strained at first, it soon becomes undeniable that you complement each other and need your companion if you want to survive another day in In Other Waters.

Using the radial-navigation system to traverse this underwater ecosystem involves a little bit of a learning curve, as most things are not just simply handed to you by saying “press this button”. It’s all about exploration and figuring out what to do with the tools you have, specifically all of the samples you’ll be collecting while on your dives. You’ll quickly discover that some samples have specific uses like providing more oxygen to your exo-suit or clearing paths through unknown territory while others reveal interesting and sometimes frightening bits of information. While the UI looks somewhat complicated and foreign at first, there really aren’t a ton of buttons that you can click through. Take your time, click through all of them to see what they do. 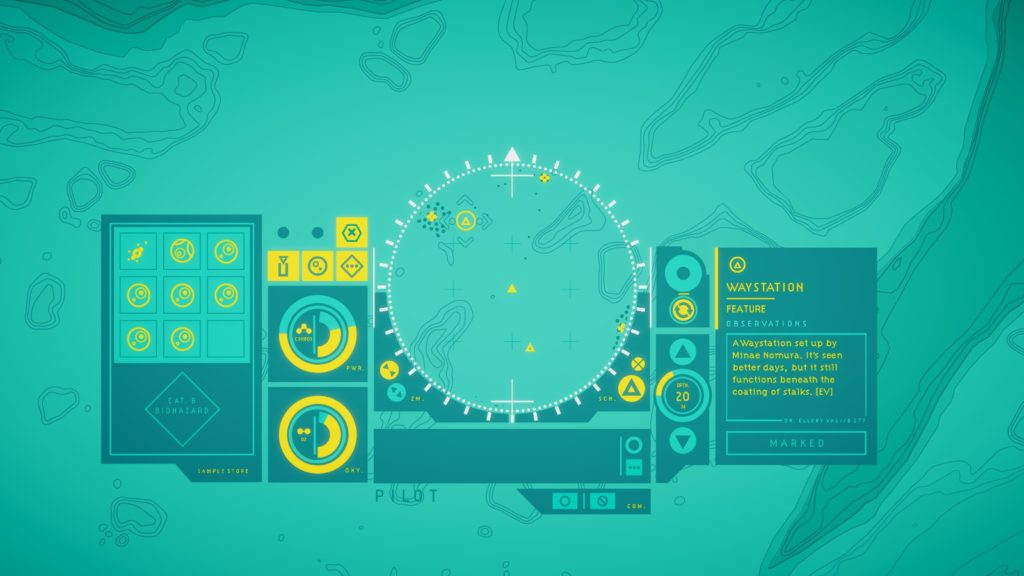 I would have preferred some icons with symbols that were a little more recognizable and easier to understand at first glance, but after playing In Other Waters for several hours I have come to appreciate the slight learning curve. You have been thrown into a completely unknown environment. Having to figure out what these strange symbols and buttons do on your own adds a sense of helplessness from the get-go, and actually helped to immerse me in my interface. These symbols come from a futuristic sci-fi company called Baikal (the company that made the suit) and after some thought, I think the symbols and interface helped add another layer to the mystery of the company and what they wished to accomplish on Gliese. And you’re not completely alone. Ellery chimes in from time to time and highlights the icons as you go to help walk you through what they do. 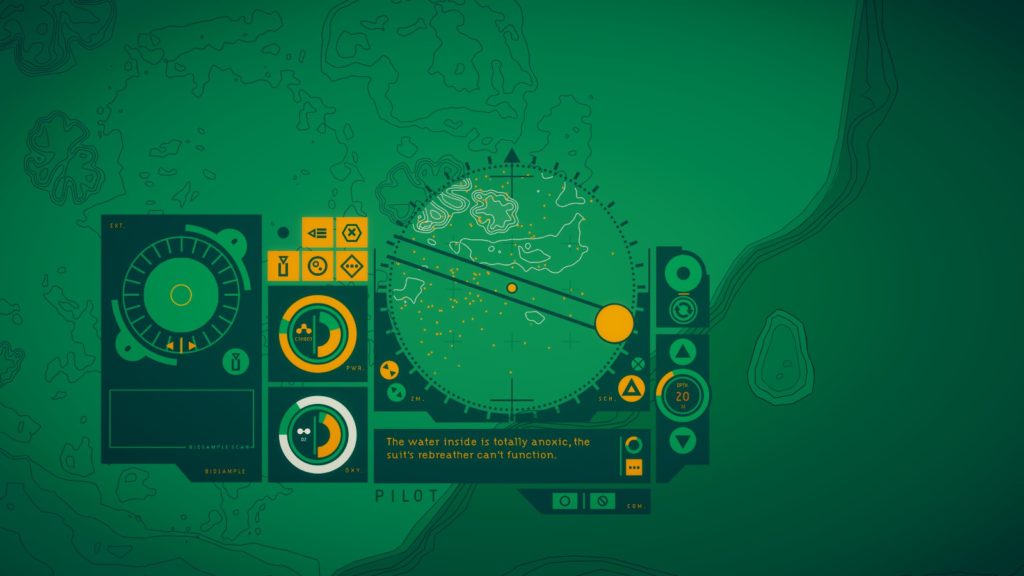 There is a lot of clicking throughout the minimalistic interface you use when exploring the depths. The first time I learned that there was an alternative was when I hit ‘Escape’ to save my game and take a break. On the pause screen, there was a small box that referenced two keyboard shortcuts you could use: ‘W’ to link up to an already explored node/feature, and ‘Space’ to scan. This was about an hour and a half into the game. I was really excited to see that there was an easier way to move around between points I had already explored, but at the same time somewhat frustrated that this wasn’t highlighted at the very beginning. I think that might have saved me a good bit of time and oxygen when reaching some of the harder-to- navigate areas of the game. 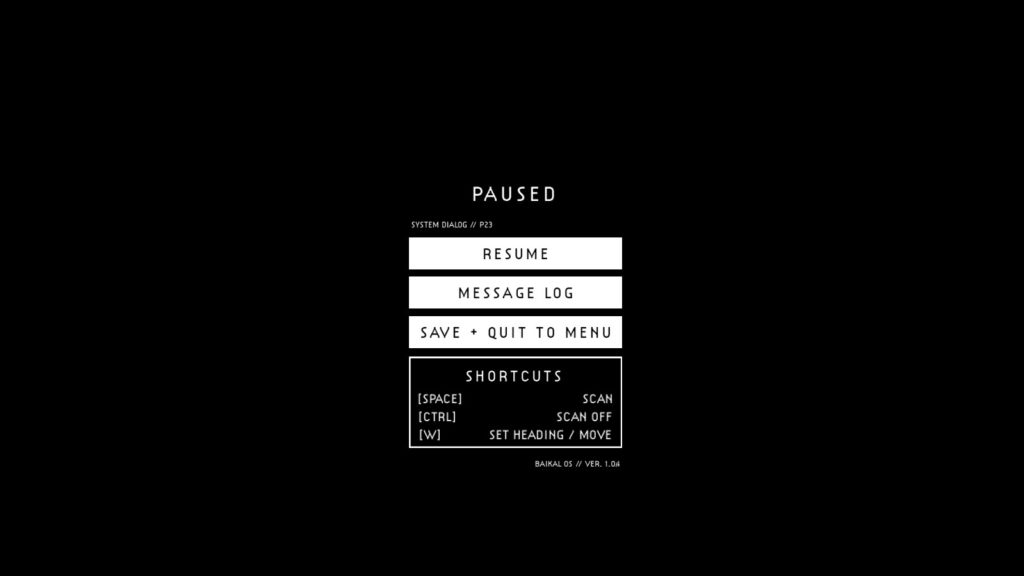 Learning about these shortcuts was like emerging from the dark depths of Gliese to take a gulp of refreshing, cool air above the surface. Suddenly, I didn’t have to click a hundred times to get to one side of the region. I was still clicking frequently, but not nearly as much as I had been before. With that layer of frustration removed, I could focus more on enjoying my journey…until I got lost.

Navigating Through the Depths

As far as I know, the only real map you have access to, is the one you see before clicking your destination from the Dive Map. Using this map, you can get a pretty good idea of where you need to go (North, South, East, West) but that is about as much as you’ll get. Once you’re out in the water, you’re on your own. The radial compass that you use to direct Ellery doesn’t have any true markers on it but does help you orient yourself with the cardinal positions on the map. You know that up top is North, down at the bottom is South, and right is East and of course the left is West. Thank you, No-one Eats Shredded Wheats. 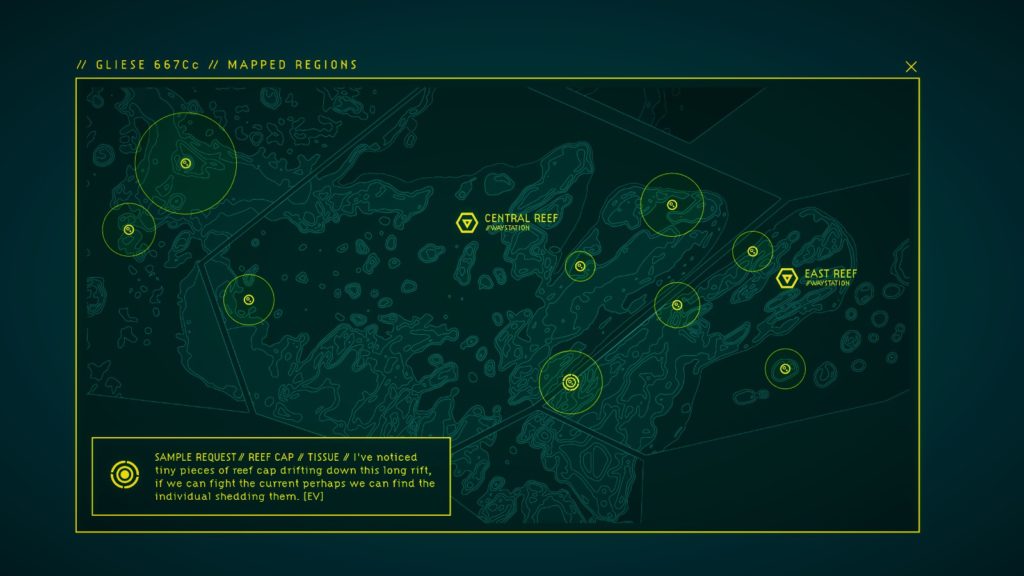 As you can see from the map pictured above, hotspots for sample retrieval are marked around the map after you’ve initially located them. Dives are made frequently in between the main storyline to retrieve samples that can be further examined at the main base lab. By dropping off any samples you find here, you can learn more about the underwater life, how they behave, and eventually what they even look like through Ellery’s sketches. Some creatures here share similarities to what we have back on Earth, but many do not. You’ll need to collect as much data as you can to build a solid foundation for future research about the denizens of the ocean and how they’ll help you with your mission. 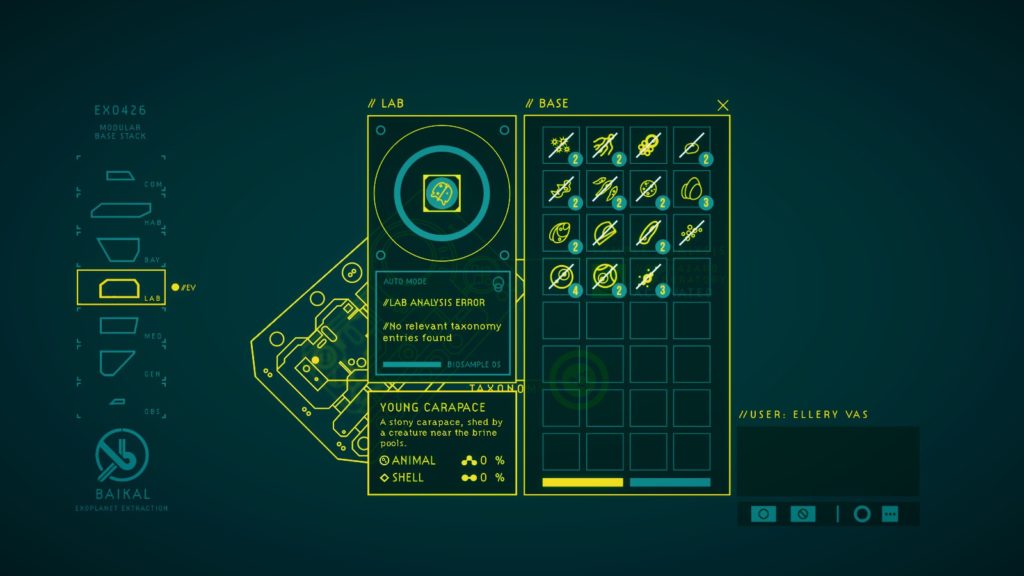 Losing Yourself in the Waves

It is very, very easy to get lost in the ocean when you’re out searching for samples and your curiosity gets the better of you. At least once per dive, I was worried about whether or not I was going in the right direction, but was determined to see my dive through to fruition. Most of the time, you can sync up to a drone that can come retrieve you if you start to get in trouble, but there are some parts in the story where you have to really push through the elements and pray that you find a station that can save you. There isn’t exactly a penalty if your suit runs out of power or oxygen. The game doesn’t end, and you don’t die, but you are carried back to the waystation where you’ll have to start your dive anew. 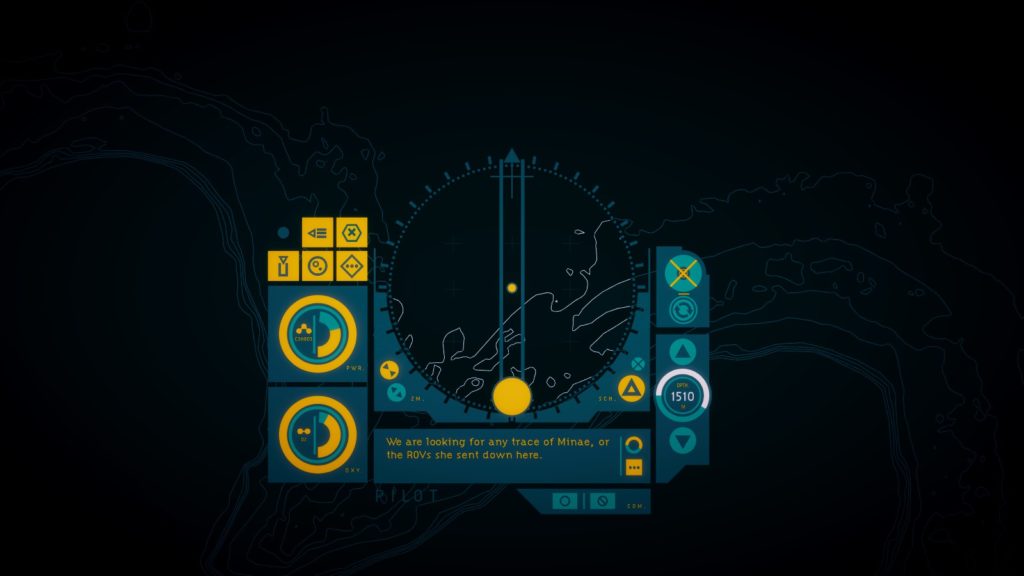 Losing Yourself in the Music

But, it’s not always a bad thing if you have to start back at the base. You have the gorgeous soundtrack to float along to. And holy heck, is it beautiful. The music is as essential to experiencing In Other Waters as is its story and core gameplay. With every trench and otherworldly feature you traverse, the music accompanies you, a lilting atmospheric melody that becomes so ingrained in your journey that it jars you in its absence. Each scene is timed perfectly with the music, some bits only pacing forward once you confirm your dialogue.


There are moments in the story where you hear nothing but the roaring waves of the ocean, or the deafening silence of darkness. In these tense moments, the absence of the haunting soundtrack hits you hard-like your exo-suit has ceased to function under the atmospheric pressure. You feel it. You feel the loss and the weight of the situation, and you feel the emptiness and the anxiety it creates within the narrative scene.

Despite some of its interface quirks, In Other Waters is a masterfully designed game, woven tightly into its music soundtrack and emotional chronicling of the relationship between humans, AI, and the environment. My heart aches for how closely Ellery’s journey foreshadows what could someday be our own, and how the caretakers of our planet have failed to nurture it on even the most basic, fundamental level. In my humble opinion, In Other Waters isn’t just a video game about collecting samples and exploring the unknown. In a world full of companies trying to push out the most realistic next-gen graphics, it’s a work of art that transcends what it means to experience a deeply-moving narrative in a video game and reminds us that you don’t have to rely on thousand-dollar video cards to be immersed in an incredible story. But, please don’t just take my word for it. Support your amazing Indie developer Jump Over the Age by trying out their game over on Steam for $14.99 USD.

Tags: adventure, Atmospheric, exploration, Great Soundtrack, in other waters, indie
Summary
Despite some of its interface quirks, In Other Waters is a masterfully designed game, woven tightly into its music soundtrack and emotional chronicling of the relationship between humans, AI, and the environment. My heart aches for how closely Ellery’s journey foreshadows what could someday be our own, and how the caretakers of our planet have failed to nurture it on even the most basic, fundamental level. In my humble opinion, In Other Waters isn't just a video game about collecting samples and exploring the unknown. In a world full of companies trying to push out the most realistic next-gen graphics, it's a work of art that transcends what it means to experience a deeply-moving narrative in a video game and reminds us that you don't have to rely on thousand-dollar video cards to be immersed in an incredible story. But, please don't just take my word for it. Support your amazing Indie developer Jump Over the Age by trying out their game over on Steam for $14.99 USD.
Good
Bad
8
Great 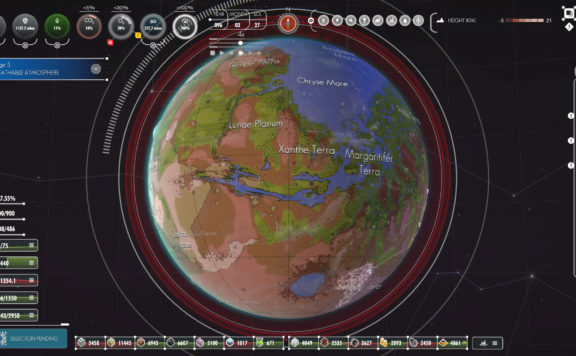 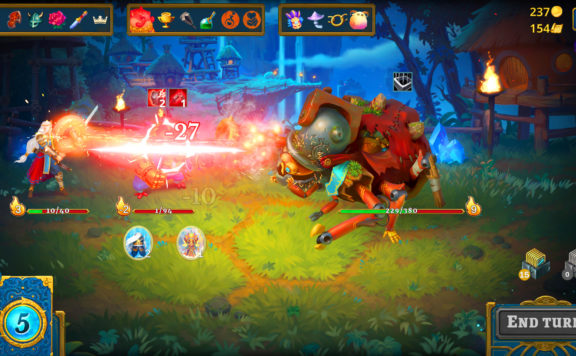 Earlier this year, Gamespace had the pleasure of sitting down for an email interview with the one-man developer of In Other Waters, Gareth Damian Martin to learn more about his creative process and what it took to craft the mysterious under...
0
Average User Rating
0 votes
Have Your Say!
Your Rating: 0
Submit
Write A Review
Genre:Adventure, exploration, Indie
Developed By:Jump Over the Age
Publisher:Fellow Traveller