Anyone that has had to suffer the tragedy of losing a loved one knows the pain it causes and how hard it can be to accept it and move on. Knights and Bikes is a great action-adventure game. It has a unique art style with loveable characters and a great story. Come, join me in watching the story of how one girl’s imagination took her on a wild adventure to acceptance. This is our Knights and Bikes review.

It should be noted that I played this on Switch Lite. Knights and Bikes, for the most part, handled really well. The controls were mapped perfectly and are easily intuitive for what the game is. I didn’t incur any problem until I got to the scrap yard in-game. At this point, and everything that was going on — the curse appearing and the waves of enemies — became too much for the Switch Lite to handle. It really slowed the boss battle down almost to a crawl. Other than that Knights and Bikes played perfectly.

I did not get to experience this on co-op on the Switch. In the absence of another player, the AI works really well in knowing when the player is doing a puzzle which requires both characters to work together. The puzzles were pretty straight forward and did not require a lot of thinking to figure out. I loved that both Demelza and Nessa had different abilities making how they play a really different experience. The way the abilities were incorporated into puzzles was excellent. It really showed off the unique abilities when, say, Demelza had to shoot a plunger through a gate to pull a switch or Nessa has to destroy rocks with her boombox. 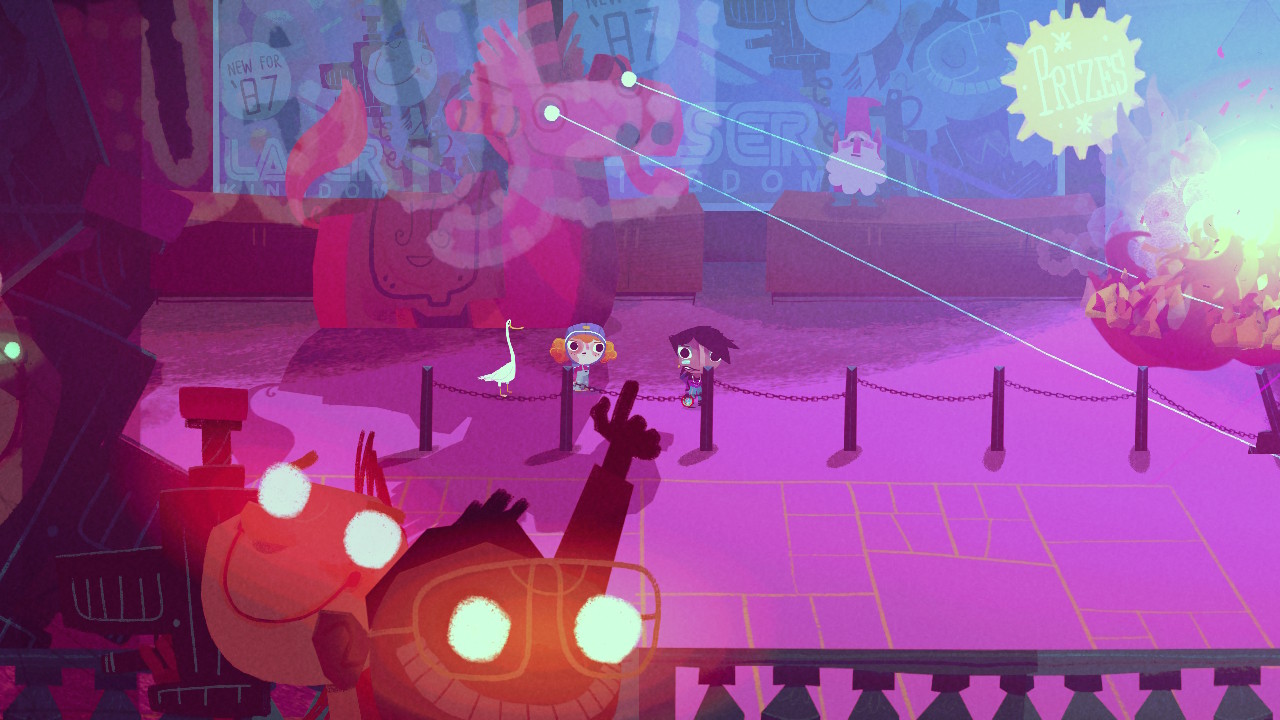 Knights and Bikes really drew me in with its unique art style. It reminded me of Little Big Planet with a bit of Don’t Starve mixed in. The art style makes the world presented in Knights and Bikes beautiful while denoting that it is clear something dark is afoot. The music and sound in the game are also on a whole other level. The music is great especially during the scrap yard boss fight and the theme park boss fight. It’s not just the music either. The laughter of the girls when they ride the bike is great. Of course, it is real laughter and it’s laughter that can be felt. It is contagious laughter. 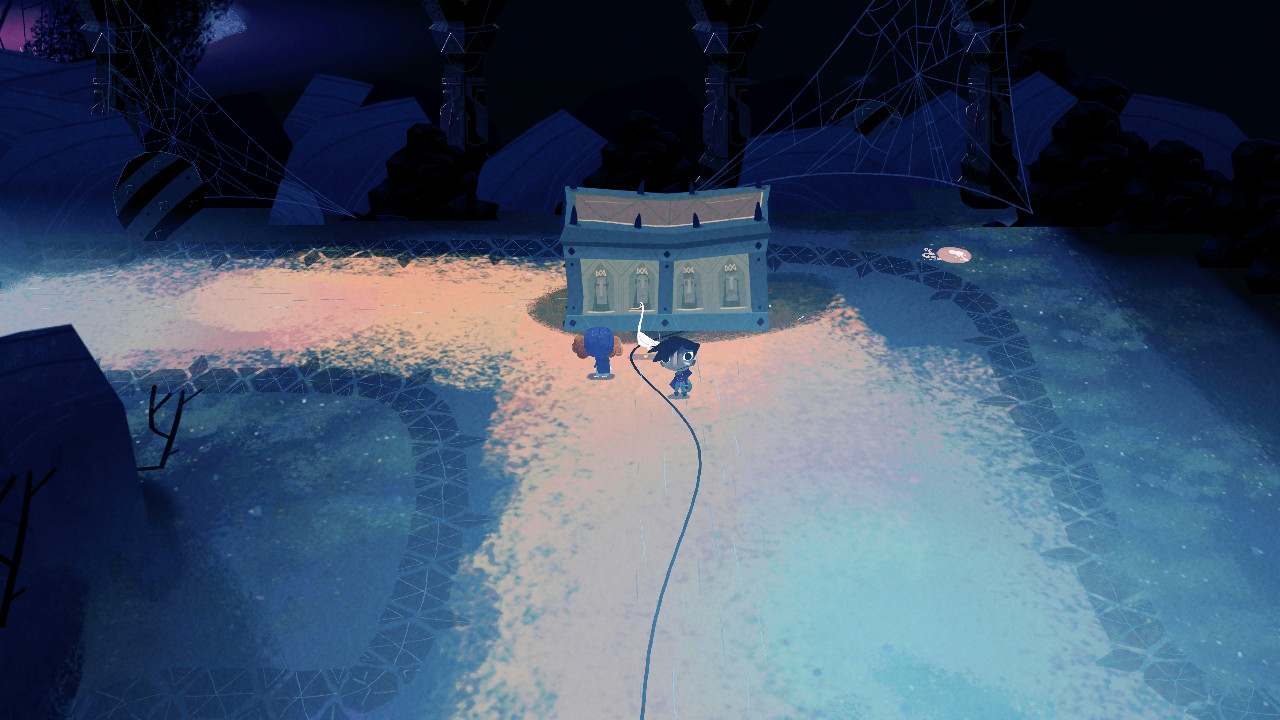 Knights and Bikes turned out to be a really good action-adventure game. I loved that action was used primarily as a way to lead you along Demelza’s journey. Knights and Bikes has a real clear 80’s feel to it reminiscent of Goonies. Demelza and Nessa are two kids going on a grand adventure to find a treasure no adult has ever found. This is the premise though the tale that unfolds in different ways. Even the music, which is great, is very 80’s style. For people that haven’t seen the Goonies, replace that with Stranger Things and you’ll get the picture.

As many people have, I’ve lost people in my life. As an artist, I use my imagination at times to escape the harshness of reality. Knights and Bikes story hit home for me in ways I didn’t think it would. It reminded me of things I thought I came to grips with but I didn’t. The journey and story of Demelza are real and will hit a lot of people hard as we’ve all had a similar story. I love that realness and I know I will play through this game again many times over. It helps as a reminder that everything will be alright. 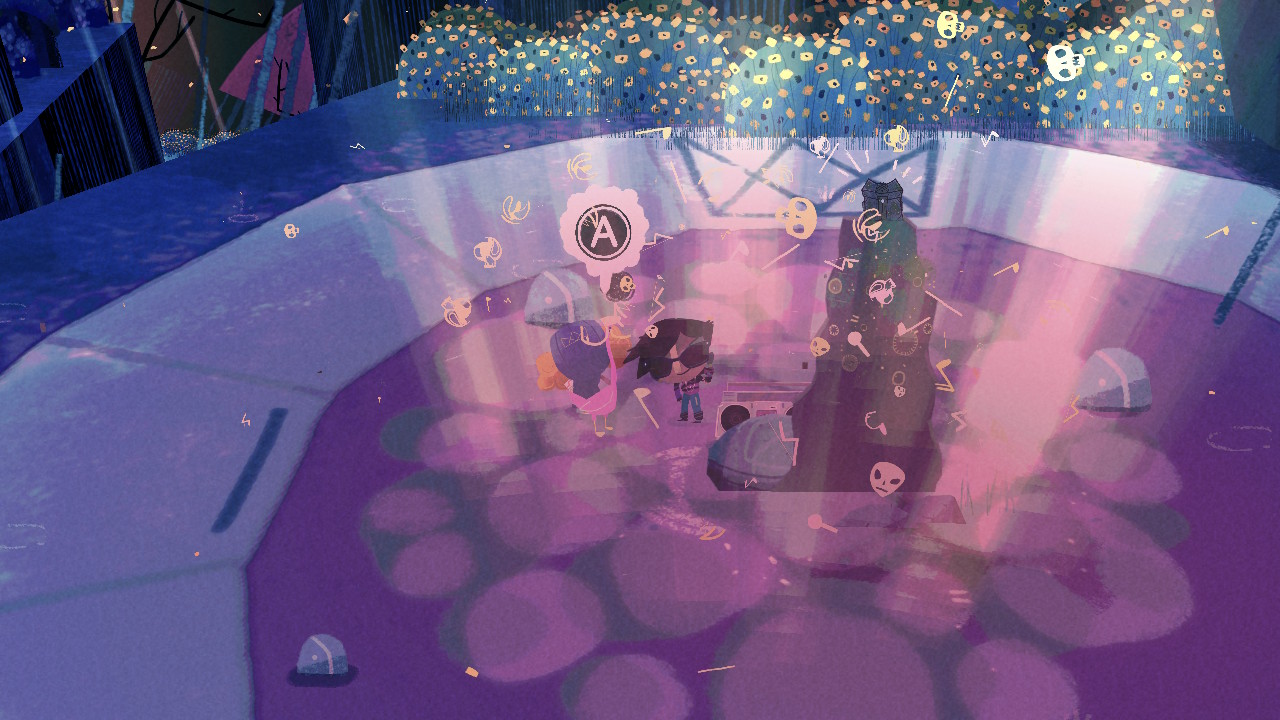 Overall Knights and Bikes is a great game I will replay over and over. I came into it not knowing what to expect and what I got out of it was an amazing story, great gameplay, fun characters, and a ton of nostalgia. I would recommend giving it a try on Switch instead of Switch Lite. Hopefully, then you won’t run into the issue I did with the game lag at the scrap yard. Still, it was fun playing through and hit me in the feelings.

Our copy of Knights and Bikes was obtained for the purpose of review.

Tags: bikes, Goonies, Knight and Bikes, Nintendo switch lite, review
Summary
Knights and Bikes is a great tale of adventure and friendship. I love the message that the game sends about the power of imagination and how it can help you overcome tragedies.
Good
Bad
9
Amazing

Anyone that has had to suffer the tragedy of losing a loved one knows the pain it causes and how hard it can be to accept it and move on. Knights and Bikes is a great action-adventure game. It has a unique art style with loveable characters...
9.8
Average User Rating
1 vote
Have Your Say!
Your Rating: 0
Submit
Write A Review
Genre:action-adventure
Rating:Everyone
Developed By:Foam Sword Games
Publisher:Double Fine
Modes:Co-op, Single-player