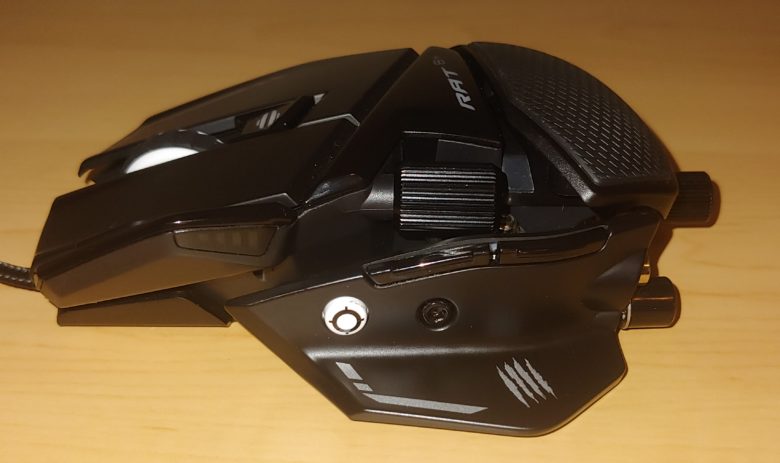 Although some people may not be familiar with the Mad Catz brand, it has been around for decades. Unfortunately, in 2017 the company filed for bankruptcy. Bought by a Chinese holding company comprised of some of its former manufacturers, the brand returned in 2018 as Mad Catz Global Limited.

Instead of continuing to create extremely niche products, the revived company went back to its roots, resurrecting some of its more successful product lines such as their S.T.R.I.K.E. keyboards and R.A.T. mice. Today we will be looking at the R.A.T. 8+. Positioned just below the top end of their 10 mouse lineup, it’s built with many of the same precision components as the top tier offerings and packs in more customization options than the entry level mice below it. Does the R.A.T. 8+ have what it takes to win over avid gamers and help regain trust in the Mad Catz brand? Read on to find out.

Let’s talk specs. Yeah, the boring stuff that most people skip over, never knowing why their peripheral ‘just works’ or ‘feels weird.’ In any event, the RAT 8+ holds its own in the tech arena. For those who need to know the numbers, here you go:

As far as packaging goes, the R.A.T 8+ is housed in an unassuming white box with a transparent plastic front cover. Hidden away in the box is a small manual highlighting the multiple customization options of the mouse, a set of additional palm and pinkie rests, and a sticker sheet of the iconic cat scratch logo. 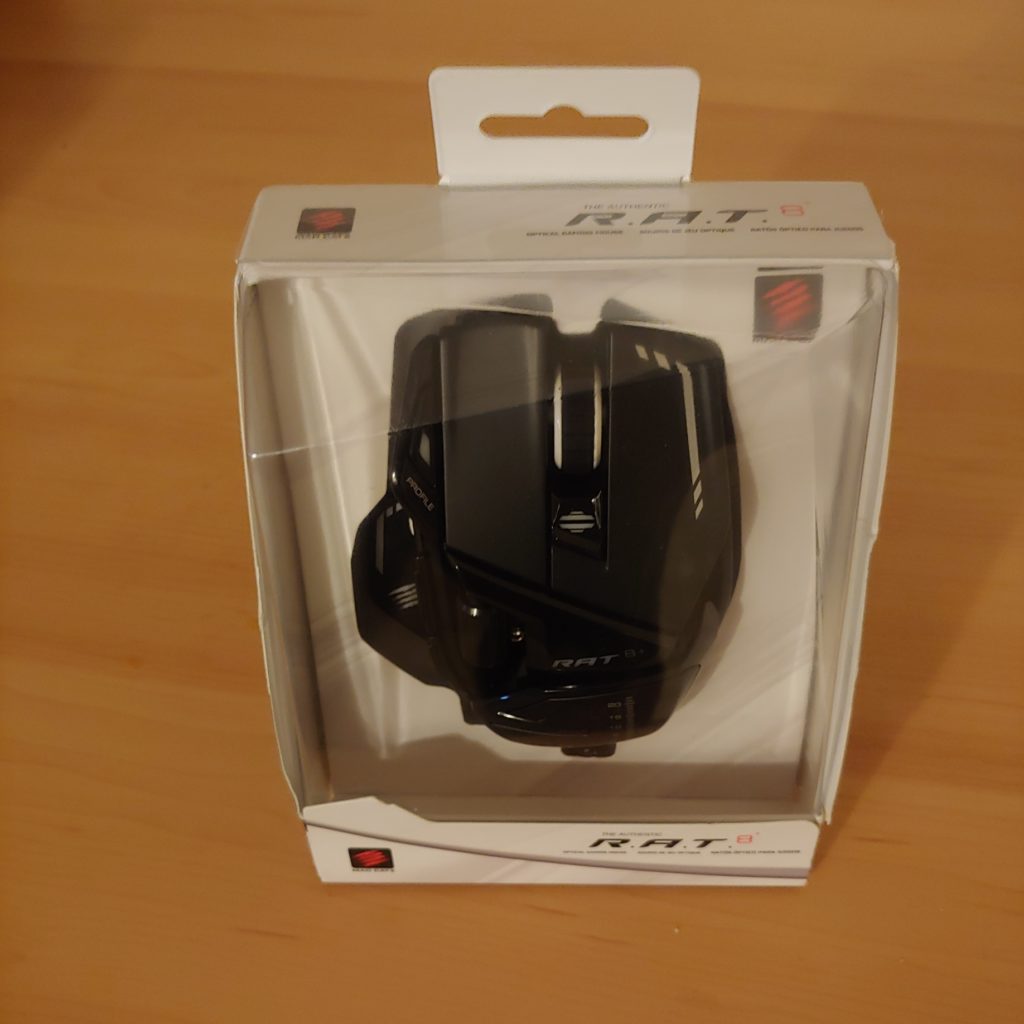 This doesn’t mean the company skimped on packaging to save on cost. On the contrary, the contents are quite secure, and I had to practically destroy the packaging to get to the mouse. I would guess the company decided to give the marketing team the week off and instead let the visibility of the unique aesthetics of the mouse pull potential customers in.

I have to admit when the Mad Catz R.A.T. 8+ landed on my desk I looked at it with disdain. The 8+ design is unconventional to say the least. While most mice have a solid turtle shell look to them, the exterior of the 8+ is littered with sharp angles and gaps in the surface along with several rods sticking out the back. I just knew the R.A.T. was going to be uncomfortable to hold. Turns out I was wrong.

I grabbed the mouse in my normal grip and I didn’t have any problem with the feel of the mouse. Not willing to accept defeat, I began shifting my hand every way I could in the hope that the design would prove problematic. No matter how I gripped it the shell felt as solid as any other mouse out there. None of the gaps or adjustment screws (the aforementioned rods actually serve a purpose) interfered with holding the mouse.

Not willing to accept defeat, I moved on to the stability of the mouse. With all the gaps in the surface – there are even spots where you can see completely through the mouse – and movable pieces, surely the mouse would be flimsy. I was wrong again. The frame is strong and affords the mouse a solid feel. Each of the removable pieces has multiple points of contact, so while they have some flexibility when off of the mouse, they are fairly rigid when screwed into place.

Other design features allowed me to firmly grip the mouse without using as much pressure as I am used to putting on the mouse. The horizontal fin at the base of the thumb rest (as well as the fin on one of the optional pinky rests) meant my fingers didn’t drag across my mousepad, allowing for fluid movement. Another design highlight for me was the small fin protruding up from the left side of the mouse. I have always used two fingers for the main mouse buttons and scroll wheel since my index finger would always slide off the mouse button if I tried to use three fingers on top. The fin stops my finger from sliding, so I can use three fingers on top of the mouse, which is much more comfortable during long play sessions. 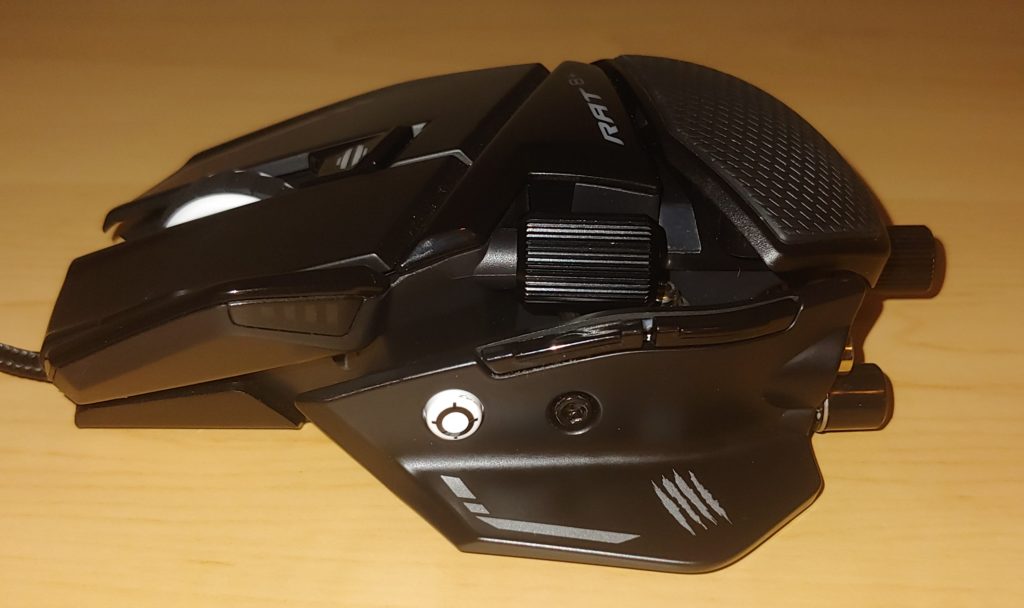 Once I started tinkering with all of the other customization options available things only got better. For starters, the rear section of the mouse can easily be adjusted by pressing a lever that allows it to be pulled back, adding up to an additional ⅝” to the length of the mouse. Hidden away in the back of the mouse is a hex key that is used to make further adjustments to the mouse. With the turn of a screw, you are able to move the thumb grip forward or backwards along the side of the mouse, and a second screw allows you to adjust its horizontal angle.

The standard plastic palm rest can be removed and replaced with either a high backrest or a rubber coated one as well. The default plastic pinkie rest can also be swapped out to a similar rest with a rubber coating. A third pinkie option adds a horizontal piece to rest your pinkie on, eliminating any fatigue you might normally encounter from keeping your finger from dragging along your mousepad.

The weight of the R.A.T. 8+ is also adjustable. I liked the feel of the mouse at its maximum weight of 145g, but if you prefer a lighter mouse you can drop some weight by removing up to three 6g weights tucked away inside the mouse. Whether you keep it fully loaded or take out some of the weights, you’ll find the mouse glides smoothly and evenly across both hard and soft surfaces.

With all of these options and a little time, you should be able to find a setup to fit your hand. Over the last few weeks, I used the RAT to play several different shooters and ARPGs. No matter what I threw at it, with some gaming sessions lasting hours, I never had any comfort issues. I even took it to work for a couple of days without any problems, though I did get a couple inquiries about the “weird looking thing” on my desk.

The one area of concern in the mouse’s design is the programmable buttons. Mad Catz touts a total of eleven programmable buttons, and technically this isn’t untrue. All of the buttons are well positioned so there isn’t any worry about being able to reach them during a frenzied battle. Each button can also be reprogrammed, but doing so limits some of the key features of the mouse, such as on the fly DPI switching. Personally, I didn’t have any real issue with this as I just set the mouse the way I wanted it and never found a need to change things in-game, but some consumers may find this conflict troubling.

When it comes to software, like the packaging, Mad Catz takes a fairly utilitarian approach. A quick jaunt to the Mad Catz website will score you their Flux Interface. This small download doesn’t come with all the bells and whistles other company’s software bundles may have, but it does come with everything needed to configure the R.A.T 8+. Each of the eleven buttons can be reprogrammed from the default choice. Whether you want to assign a keypress, a common Windows function, or a user-created macro to a button, all it takes is a couple of seconds.

The same goes for making changes to the sensors in the mouse. You are able to assign four distinct DPI settings which can be cycled forward and backward during game play by the rocker switch located directly behind the scroll wheel. A fifth DPI setting can be assigned to the sniper button on the thumb rest. For anyone who needs total control over the sensors, lift off height and USB polling rate can also be set through the Flux Interface. 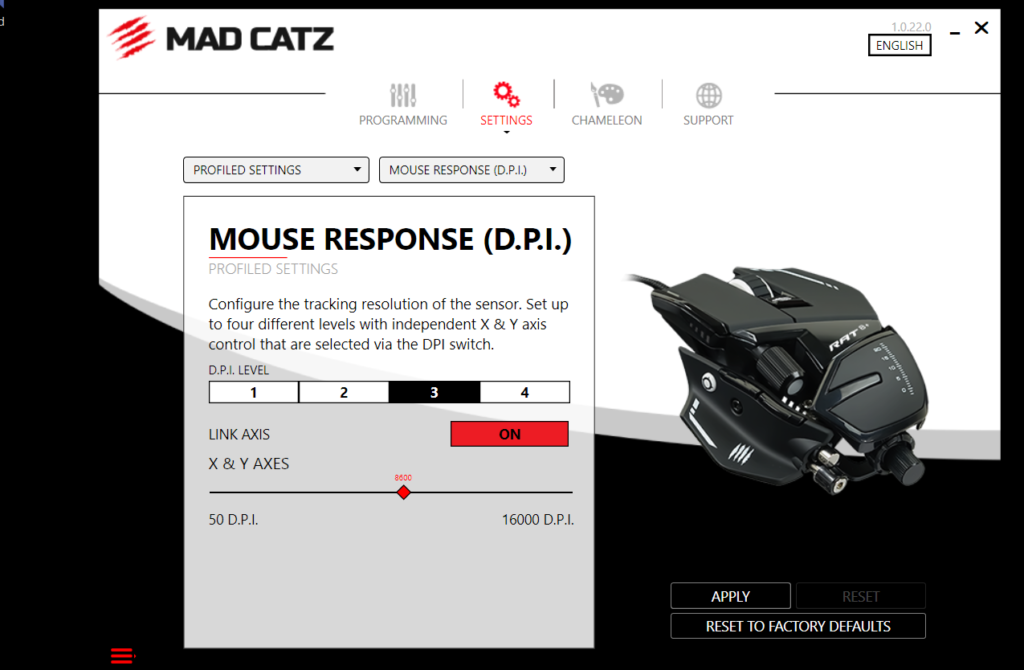 And let’s not forget about the RGB lighting. There are three separate RGB zones, all of which can be assigned any of the usual 16.8 million colors. If solid lighting isn’t good enough for your desktop, there are also pre-programmed lighting effects to choose from. All the basics are here – breathing, heartbeat, color cycle, and rainbow. Unfortunately, there isn’t any way to sync the lighting effects to other RGB equipment (if there is, leave a comment below and I will make a correction). The lighting zones are not that big, but if syncing all your lighting together is important to you there is always the option to turn the lighting off.

All of my other peripherals are from the same manufacturer and come with a unified software package, so I was initially concerned about having a second program just for the R.A.T. 8+. Fortunately, the Flux Interface is run and close software, so it doesn’t interfere with my other peripheral software. Up to four profiles are stored in the onboard memory, with switching between profiles as easy as a button press. This also makes the mouse portable, allowing you to take all of your favorite settings with you on the go, no software install needed.

I can’t remember the last time the mouse sitting on my desk wasn’t of the MMO 12 thumb button variety. I never gave having a different mouse for shooters and action titles a second thought. I truly expected to run the R.A.T. 8+ through its paces for the review and then throw it into a drawer somewhere. Instead, it has earned a permanent spot on my desk and has actually taken over as my primary mouse for everything but classic MMOs where extra thumb buttons reign supreme. With the Mad Catz R.A.T. 8+ in hand, I feel like I am ready to go pro. Well, maybe not, but it does lend itself to a comfortable and precise gaming experience and is still practical enough to be used for more mundane day to day computing.

Note: The product discussed in this article was provided by the manufacturer for the purposes of review.