Encased in crystal for 500 years you have slumbered. Waiting for that fateful day when you would be released from your prison, and once again you will be free to roam the open world and feel the wind upon your face. One day a young boy and his baby sister happen upon you while they were trying to get away from monsters. With a single touch from the boy’s hand, your prison begins to shatter. You are once again free, and this is our review for Monkey King: Hero Is Back.

From Publisher Oasis Games and Developers HexaDrive, Sony Interactive Entertainment comes an action game with high flying kicks and punches, Monkey King: Hero Is Back. The game is based on the 2015 Chinese box office hit, and it pits the Monkey King against monsters throughout the world as he attempts to earn back his magical powers through good deeds. Paired up with Liuer, and his baby sister An-An, you will explore ten levels of gameplay.

Graphically, Monkey King is beautiful. From the trees to the caves, to the mountains, everything feels like it would in an actual movie. Combat is free-flowing and quick until your flurry is interrupted by an enemy punching or hitting you, and the effects are very anime in origins. It was good to see how the game shaped up versus the movie. 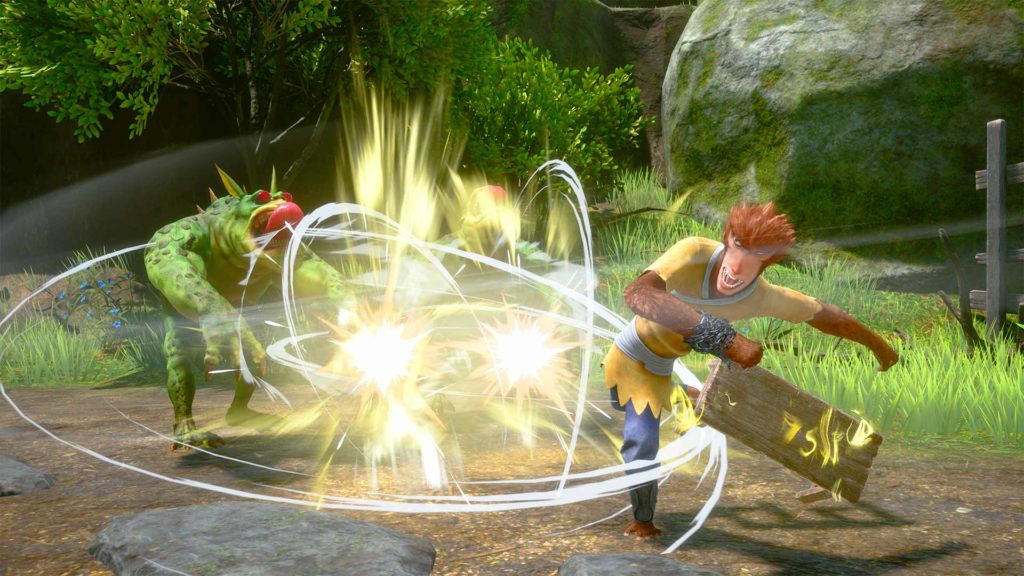 Combat is one of the most important parts of the game and is very similar to other games of its type. You have light attacks, heavy attacks, ducking attacks, and magical powers. In the story, you have had all of your magic locked by a chain that is on your wrist, and as you complete good deeds you will regain the ability to learn your magic skills. In this way, it is kind of like an RPG while not being one. You gain experience which is used to unlock different levels of your magic skills.

Learning the different attack combos with your light and heavy attacks is important, especially when you are up against bosses who take a lot of damage to defeat. If you time your attacks correctly then you will even be able to enter into quick-time events where you will be able to block and attack the enemy at the same time. If you win the QTE, you will watch the enemy get kicked into the screen, which is pretty funny to see. I like how it attempts to break the fourth wall.

Eventually, you will progress far enough into the story to earn back your magical staff, and even fire projectiles to launch at your enemies. The whole reason I was interested in this game was because of the Jackie Chan movie Adaptation from 2008, The Forbidden Kingdom. While it is not a match for match scene-wise with the Anime and the game, it still ventured through the story of the Monkey King and one kid’s journey to free him. There are very similar thought patterns throughout the movie and the game and it gave me a reason to try to look at the story from a different perspective.

Tags: action combat, Chinese Anime, Monkey King: Hero is back, Oasis Games
Summary
Overall, I like this adaptation of the Chinese story of the Monkey King. It plays smoothly and without any type of lag that I saw. Combat flowed smoothly, and the combat system was simple enough for even a young kid to learn. For $39.99 USD you get a good story which is important for games. We don’t get enough games with a good story nowadays, and I am glad this is one of them.
Good
Bad
8
Great

Encased in crystal for 500 years you have slumbered. Waiting for that fateful day when you would be released from your prison, and once again you will be free to roam the open world and feel the wind upon your face. One day a young boy and ...
6.9
Average User Rating
1 vote
Have Your Say!
Your Rating: 0
Submit
Write A Review