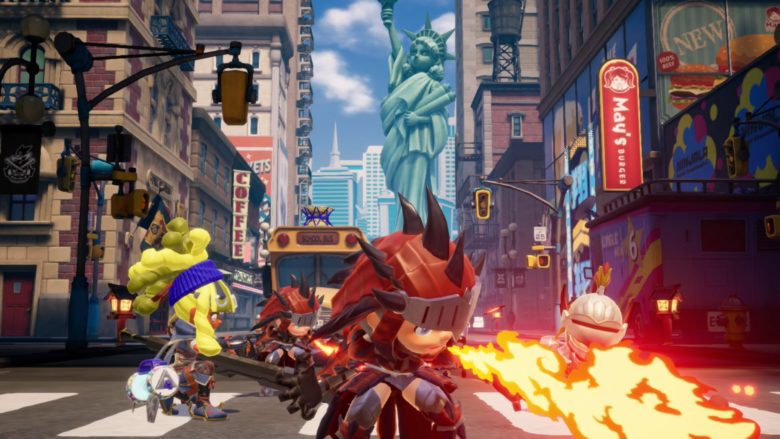 With a huge portion of Nintendo Switch owners eagerly cutting down the local wildlife in Monster Hunter Rise, it should be safe to leave the local village for a time and jump into Ninjala for a new collaboration event. Starting today, competitors entering this Ninja-gum arena will find a range of extra updates, costumes, and decorations on offer between now, and all the way through until 26 May.

Alongside the new threads, players in Ninjala can turn up the heat and cook up some success with three new emotes. BBQ Success, BBQ Fail, and Weapon Sharpening all add their own distinctive flair to your pre and post match activities. Even fancier is this updates new Gum Utsusemi, allowing games to take the form of a Palico and Palamute. There’s also a MHRise 2 IPPON decoration and a Monster Hunter tee up for grabs, as well as a MHRise Palico sticker just for logging in during the event.

This isn’t the only collaboration event that we’ve seen from the arena battler that is Ninjala. With real-world support from music star Kyary Pamyu Pamyu and in-game appearances from Sonic the Hedgehog, this hugely successful free to play arena, where players chew gum and display ninja powers, is certainly attracting some colorful supporters. You can find out more about Ninjala and the new Monster Hunter Rise x Ninjala event over on the official Ninjala website before picking up your Nintendo Switch and jumping into action.

Written by
Ed Orr
For those of you who I’ve not met yet, my name is Ed. After an early indoctrination into PC gaming, years adrift on the unwashed internet, running a successful guild, and testing video games, I turned my hand to writing about them. Now, you will find me squawking across a multitude of sites and even getting to play games now and then
Previous ArticleFallout 76 Locked & Loaded Has ArrivedNext ArticleNumskull Unveil Clive ‘N’ Wrench