Moonlighter is a cute and fun game where the player balances the hectic day to day of running a shop in a small town with a nighttime full of deadly dungeon delving. Luckily sleep is not something which is required in this game because I’m not sure when that would have happened. Often in games where there are two distinct phases of gameplay one phase will suffer a bit and might not be up to quite the same level of polish as the other one. In other words, often one phase will feel like the main phase while the other will feel sort of tacked on and less important. Moonlighter deftly avoids this issue altogether and delivers one solid game where each phase works seamlessly with the other.

As a long-time fan of RPGs, the dungeon delving aspect of Moonlighter is what most appealed to me initially. There are four different dungeons in the game but only one is available to explore at the start. Each time a dungeon is entered its layout is randomly generated so there’s no exploring some of the dungeon and then coming back to finish it off later. This aspect can be a bit frustrating because if you die while in the dungeon you lose everything in the general inventory, thankfully anything equipped is not dropped and there is one row of the inventory which is also safe. 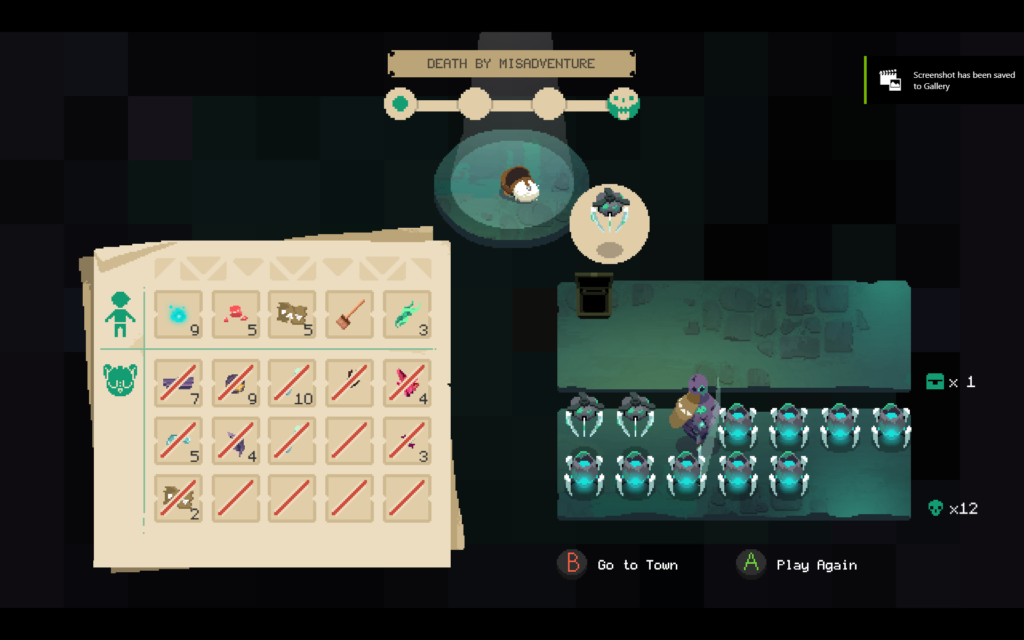 As I mentioned earlier pushing as far through the dungeon as you can every time you enter is important because after you leave everything will reset and you’ll have to start all over. The balance between how far you can risk pushing and being able to make it back to town with all your stuff is the hardest aspect of this game. Fortunately, this balance is helped by there being a room with a healing pool in it. All you must do is sit in the pool for a few seconds to fully heal up, and there doesn’t seem to be any limit to how often these pools can be used. When I was lucky and found a pool early in the dungeon I would often go through a couple of rooms at a time and then go back to the pool and heal up. This also helped me to not go through healing potions quite as quickly and it was easier to clear everything. However, not finding these pools early was also quite detrimental to my progress

Combat in Moonlighter is simple, though initially, you start off with a broom as a weapon which is mostly ineffective against the mobs encountered in the dungeons… at least ineffective when compared to other more serious weapons. The other weapon options are sword and shield, greatsword, spear, gloves, and a bow. The bow is useful for attacking some of the bigger mobs which hit hard even when I was blocking. Attacking is simple in that you just face what you want to attack and then attack them. This did have a bit of wonkiness to it however because some mobs would come at me from a diagonal, but I could only face one of four directions. This didn’t happen too often but often enough that it was annoying and directly led to my death a few times. 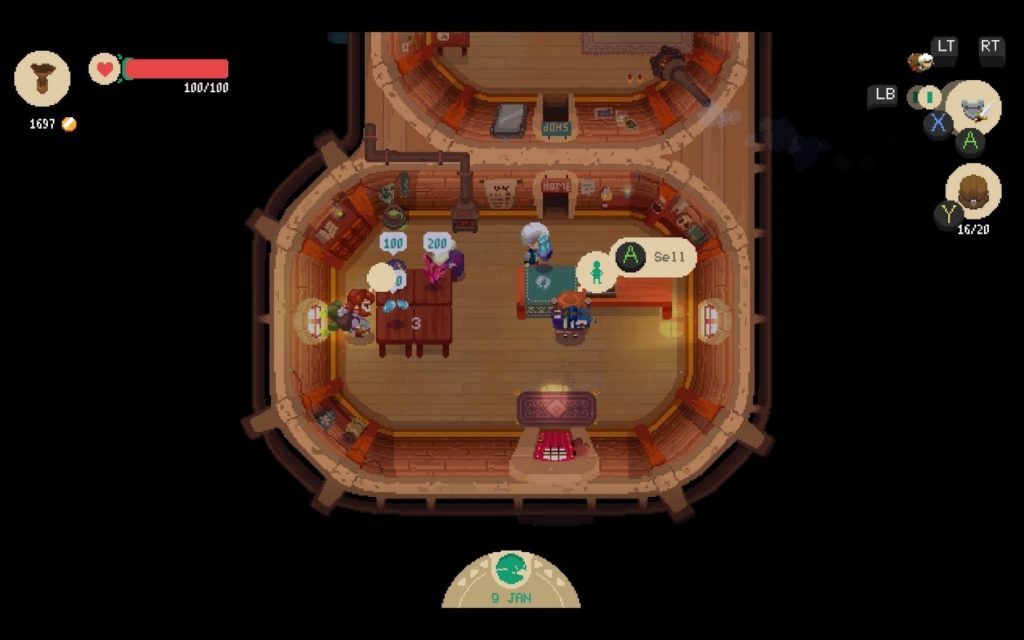 After a successful pillaging of a dungeon, it’s time to go back to the shop and sell sell sell! While in the shop you can put pretty much anything you found in the dungeon up for sale. Nothing has a starting price so it’s up to you to find what a good price for an item is through trial and error. One of the best features of the shop is as things get sold or patrons comment on the prices you can make changes immediately without having to close the shop first. This goes a long way towards finding the optimal price for all items quickly. One thing to keep an eye out for though is while you are busy making changes to the items don’t neglect the customers wanting to buy things. They will only wait a certain amount of time and after that time has passed they will just leave the shop with the item. 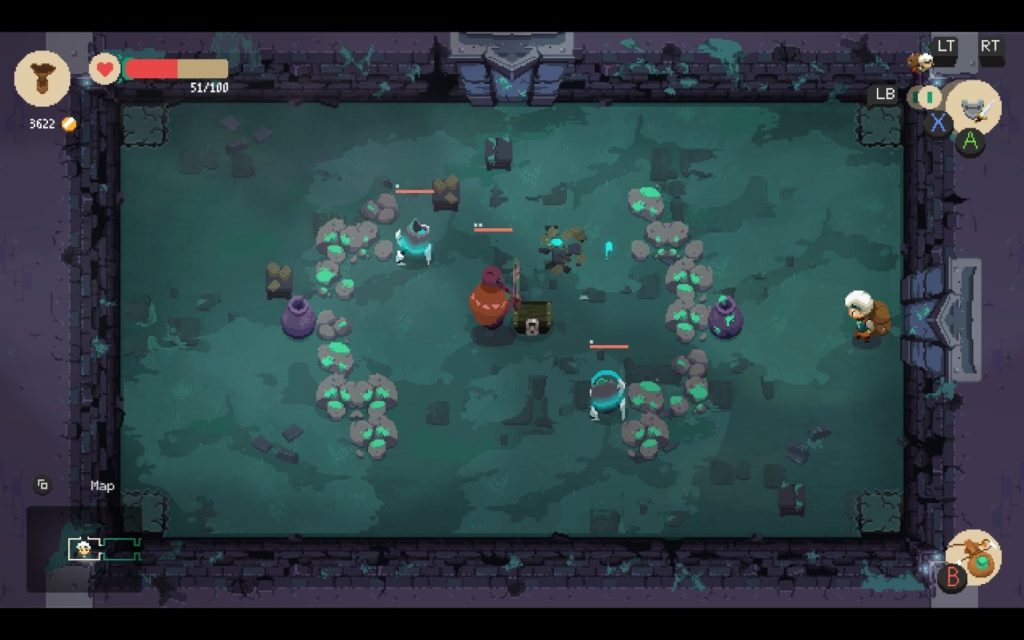 There are a few things to watch out for though. If the market gets flooded with an item it’ll lose value. This can happen if you just sell a ton of something or if invite a merchant to town who is also selling the same item. The other thing is some items are needed to make potions or gear which is helpful in the effort to make it further and further into the dungeons. So accidentally selling a needed item can be particularly frustrating. Thankfully the wishlist feature comes to save the day here. Anything you want to work towards crafting can be added to the in-game wishlist. After doing this a star will appear on the item’s icon to indicate it is important and let me know instantly if I needed it or not. I also should mention all crafted gear and potions not only has materials cost but will also cost a fair amount of gold as well.

Tags: Moonlighter, pc, review
Summary
Overall the two halves of the game fit together very well and combine to make an interesting game. Clearing out the dungeons can occasionally feel a bit grindy because I often had to do part of it over and over before I was able to get all the way through it. There’s even a bit of a town management aspect as well. Additionally, there is even a bit of a story about these dungeons which is uncovered as you explore more of them and find various items. The story for the most part is sort of to the side and not the main thing, but it is interesting. Note: Our copy was reviewed on PC with a code provided by PR. Compare To: Delver, Dungeon Souls, & Recettear
Good
Bad
8.5
Great 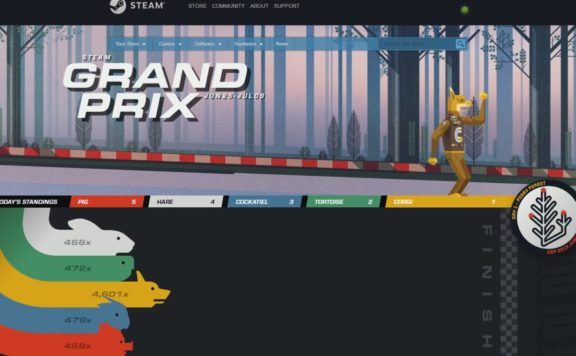 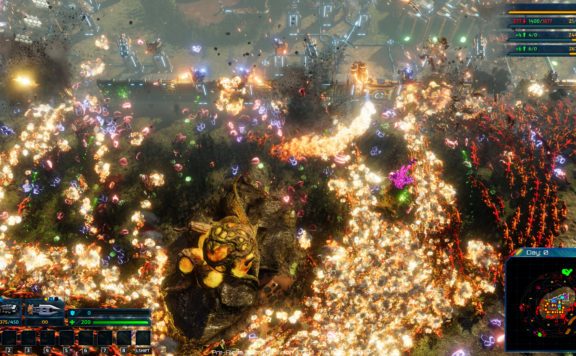 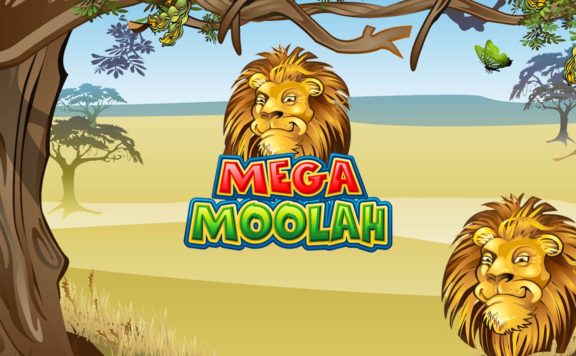 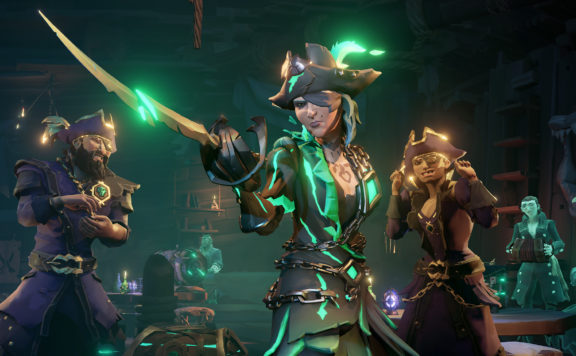 Forts of the Forgotten: A Sea of Thieves Adventure Shared Cinematic Trailer
March 22, 2022

Moonlighter is a cute and fun game where the player balances the hectic day to day of running a shop in a small town with a nighttime full of deadly dungeon delving. Luckily sleep is not something which is required in this game because I’m ...
0
Average User Rating
0 votes
Have Your Say!
Your Rating: 0
Submit
Write A Review