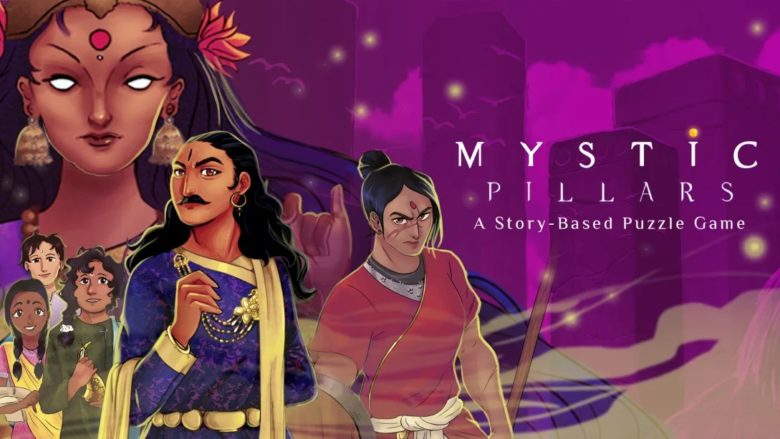 I’ve had a chance to review many “puzzle games”. And for each of them, one thing remains consistent. That being puzzles are the core component of the game. Sometimes they are even encapsulated by another game mechanic, for example, platformer puzzle games. And there are other cases of just being straight-up puzzle games. So marrying a story-based mechanic with a puzzle game would seem to be a match made in heaven given the laid-back nature of both formats. This is exactly what Holy Cow Productions did with Mystic Pillars and they even threw in some Ancient Indian culture to boot. Welcome to our Nintendo Switch review of Mystic Pillars! 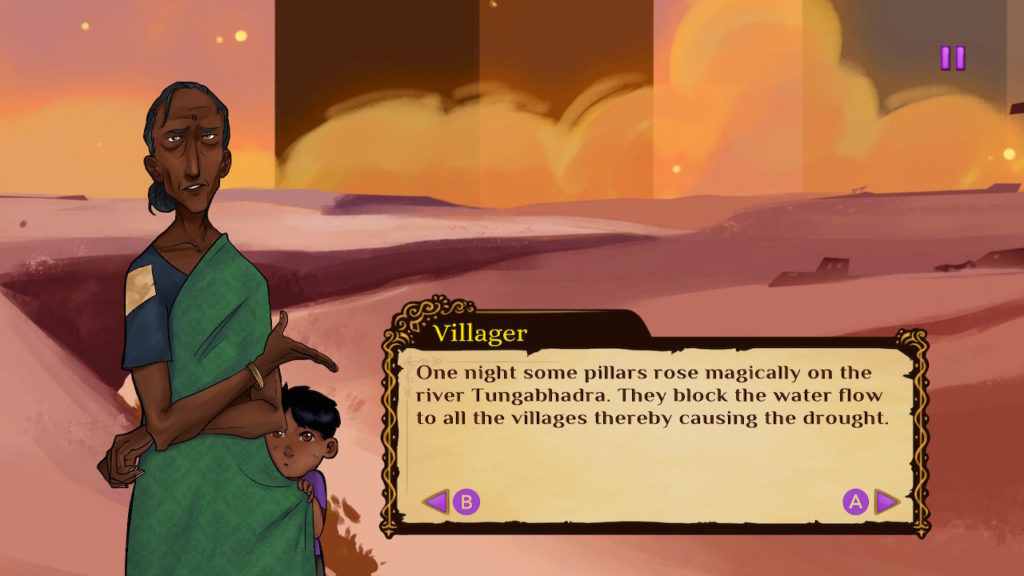 You play the hero to save the day!

In between sets of puzzles, there’s a story to be told here though. You’ll play as a mysterious traveler where you’ll find yourself in the kingdom of Zampi. When you arrive you find out the kingdom is suffering from a terrible drought plaguing the kingdom. A set of magical pillars is blocking the water. By solving a “puzzle” you’ll knock down a set of pillars.

The game’s setting is influenced by the UNESCO World Heritage site Hampi, India. The developers have stated that Mystic Pillars is an effort to showcase the Indian culture and lesser-known languages like Telugu, Kannada, Tamil, Catalan, etc. You can actually play the game with voiceovers in the Indian Language “Kannada” or “English”. 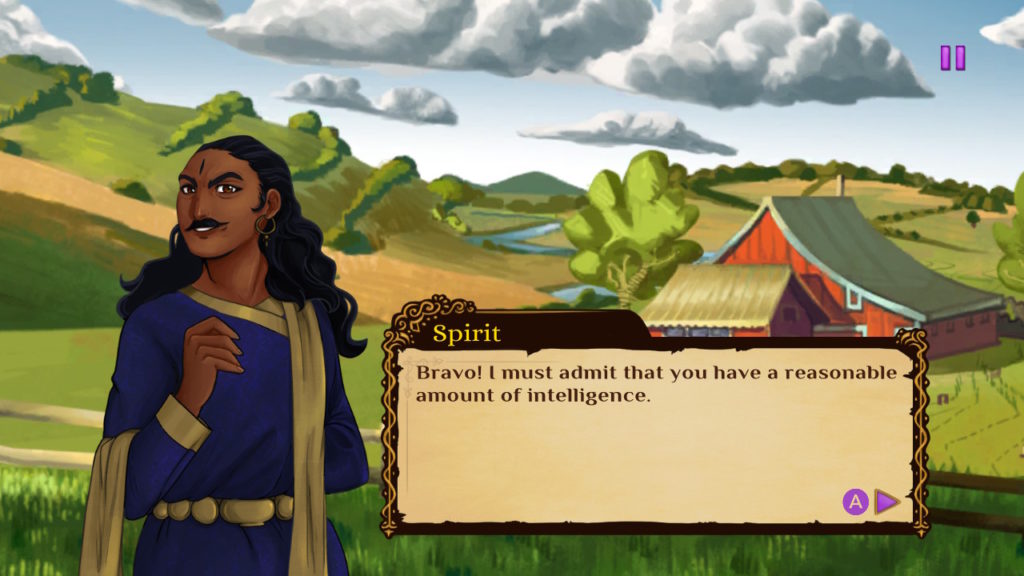 This spirit fellow shows up between puzzles to goad you.

While the Mystic Pillars story is well written and elegant it just felt like at times I cared less about the story and more about getting to the next intriguing puzzle. Storyboards and cut scenes are represented between groupings of puzzles while an Indian Spirit tends to goad you more often than one might like.

It’s All About The Puzzles 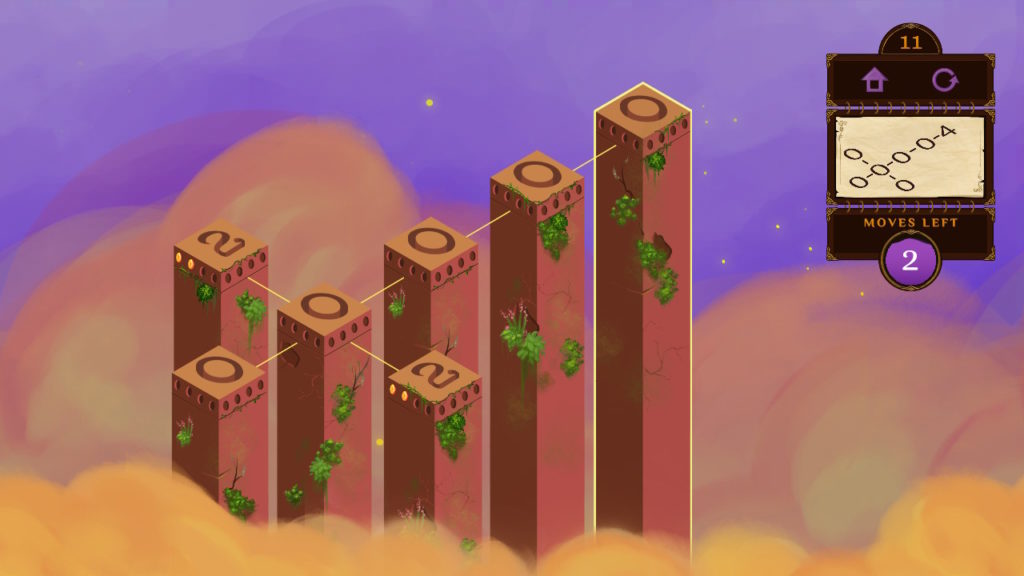 The puzzles themselves are all based on the same principle with different properties. You’re shown a set of pillars with a number of gems on designated pillars. You need to get the gems onto the pillar shown in the window in the upper right. Groupings of gems can jump (i.e. move) onto adjacent pillars at a maximum depending on how many gems are on the current pillar. For example, a pillar with two gems can be moved to a pillar two away, which moves both gems, or one away, which moves only one gem. It’s really a simple concept but becomes an engaging and fun time. 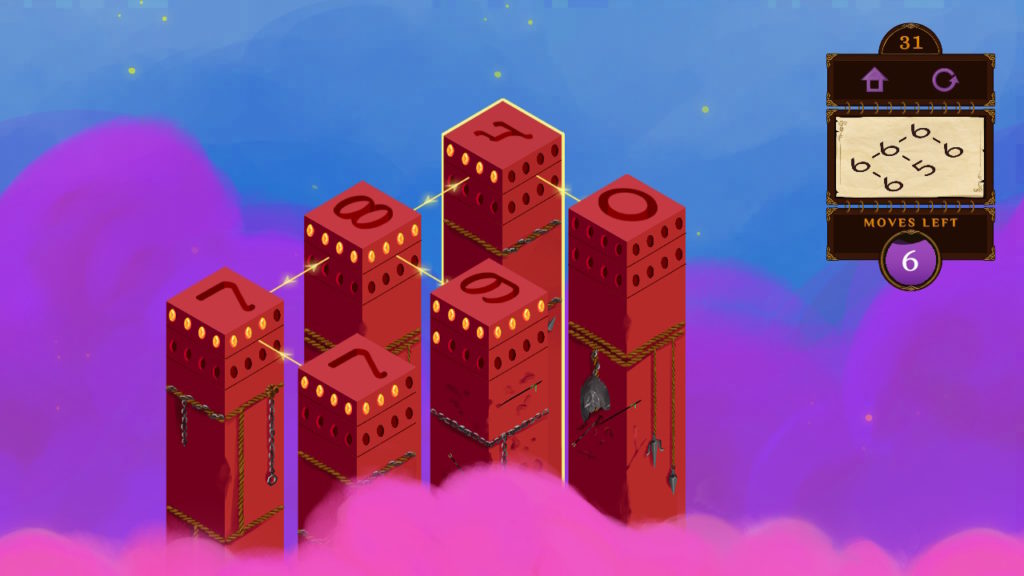 Puzzles get tougher as you move further into the story.

Later levels start to introduce advanced barriers like restricting the flow of traffic from one pillar to the next. It all becomes remembering how to add, subtract and figure out how to meet the conditions in a limited amount of moves. For whatever reason, the game is missing an “undo the last action” button. This seems unfortunate but maybe the developers had a reason.

Puzzle difficulty seemed to fluctuate. Some of them I’d get stuck on for a longer time and the next several that followed I solved fairly quickly. Overall it went rather quickly. 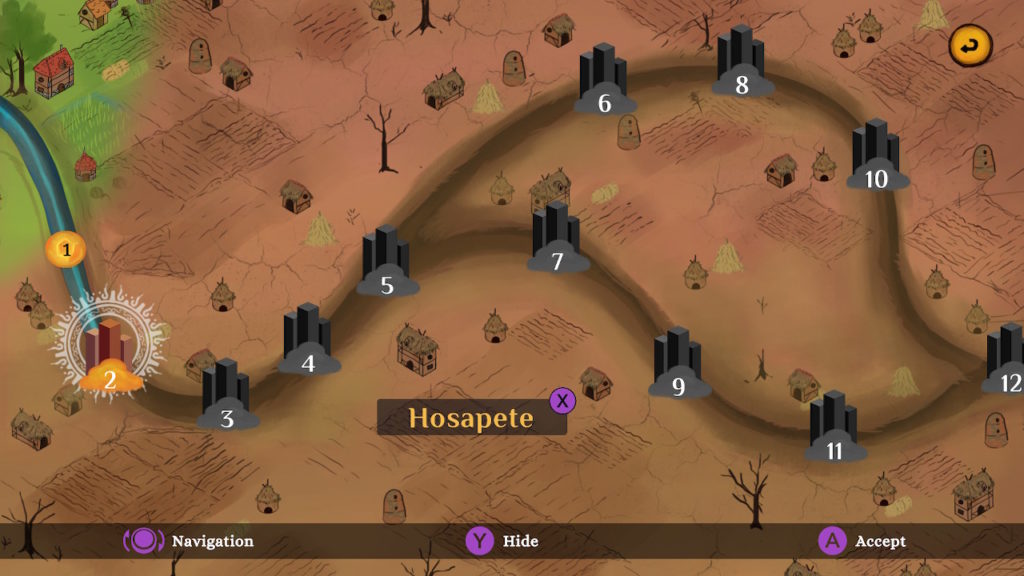 Travel method from town to town.

Navigation to the next puzzle takes place on a map connected by numbered puzzle nodes. This represents you moving from town to town. In some sections, the path splits to reduce the required number of puzzles to solve to see the end of the game. Puzzle aficionados will most assuredly just do them all. Mystic Pillars played well in docked and undocked mode. The game shines in undocked mode, especially with its touch screen controls. It makes for a wonderful travel game! There’s really not a lot more that can be said other than Mystic Pillars deserves high marks for a puzzle game that also comes with Indian cultural references thrown in for a great hybrid!

Tags: Holy Cow Productions, Mystic Pillars
Summary
Mystic Pillars has an elegant Indian story woven into the game's puzzle design. At times the storyboards felt more like a barrier to getting to the next set of fun and engaging pillar puzzles. Even though a story-based puzzle game is a novel idea Mystic Pillars would stand strong on being just an outright "puzzle game". The simplicity of the controls also makes it an exceptional "travel game" via the Switch's undocked mode and touch screen support!
Good
Bad
8.5
Great

Written by
Scott Jeslis
Scott is a comic book, music and gaming nerd since the late 70s. Gaming all began on the Colecovision and Atari 2600. He buys and reads new comics every Wednesday from his LCBS and helps run an online Heavy Metal radio station.
Previous ArticleFarming Simulator 22 Mods – The ExpectationsNext ArticleTop 5 MMORPGs For Two Players