I had an idea for a video game once. I even had some friends who were interested in seeing it happen. The more that I wrote the story, the more I realized just how much work it was going to take to make that happen. In the meantime, the friends who were interested in helping had move on and the idea fizzled into the aether. That moment instilled in me a sobering reality: game design is difficult. Any game that is worth the time and money to spend on it would require sacrifice on both ends. We are going to come back to this thought because it will be important later. This is our review of Lonely In The Winter.

Lonely In The Winter is a turn-based JRPG that tells the story of Robbery “Rob” Cold, a former soldier driven to a life of mercenary work. Driven by the sickness of his wife and daughter to a mysterious illness, Cold joins a shadowy organization that collects relics from the past. This organization believes that these artifacts are the key to healing what plagues the land. 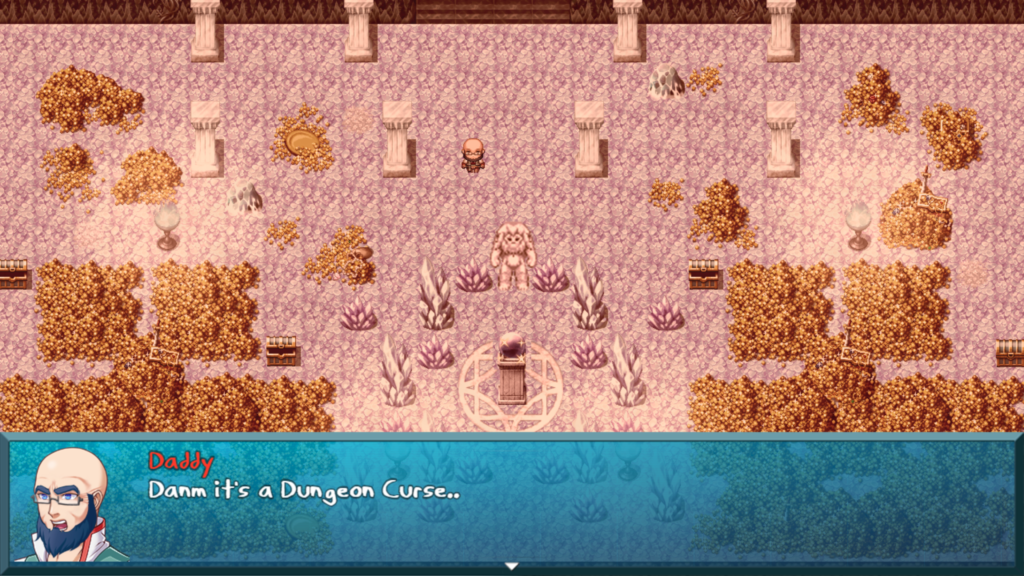 On one such hunt, he encounters a violent yeti. Upon its defeat, the yeti transforms into a small child. With no memory of where his parents are or how he came about these transformational powers, Robbery agrees to do the bare minimum for him. He leads the kid to the main road and send him on his way. After all, there is a crystal to find and they are the key to bringing his daughter back.

Transforming monster kids aren’t his only problem though. A group of bandits are after the same thing. Led by a man draped in crimson name Redone, they will stop at nothing to see that the crystal is their to control.

The controls within Lonely In The Winter are very straight forward. Arrow keys or mouse clicks move you around the map with the space bar serving as your key to interact with things and the escape button canceling actions or backing out of menus. 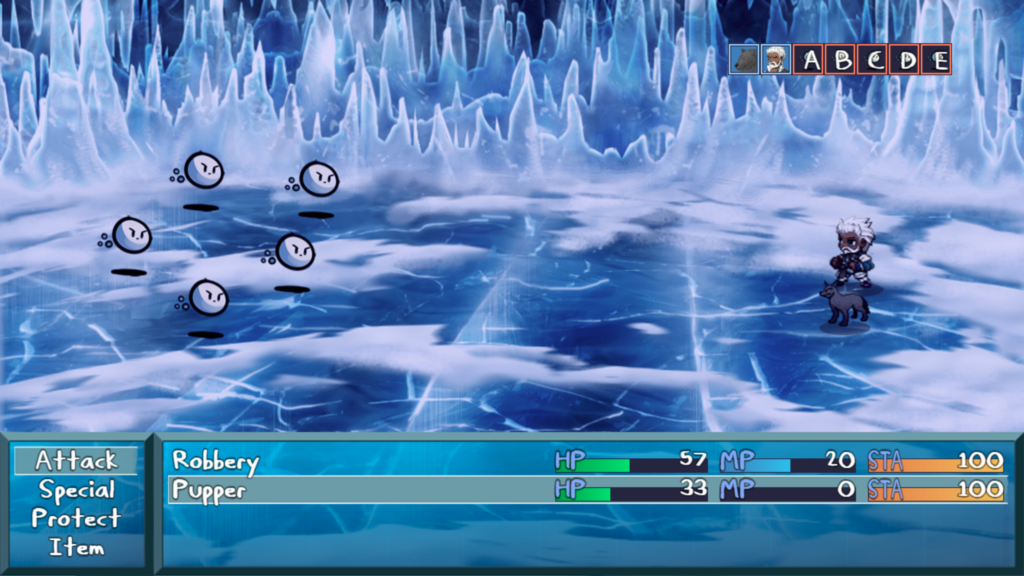 This simplicity is a theme carried throughout my experience with Lonely In The Winter. Combat being turn-based, with few actions to choose from. There really is not a broad catalogue of enemies to fight against, and the story ends quite abruptly. The only thing about it that is not simple is the combination of puzzles that are required for you to progress in the game… which included a slide puzzle. It took me 38 moves to complete.

When it comes to the length of the experience, Lonely In The Winter is very, very short. The full game can be completed in roughly two hours. At the end, you are given a score for your run along with a set of statistics outlining the number of secrets, treasures, and party members you found. It was a rather jarring conclusion without any resolution.

Before we circle back to my opening remarks, we need to talk a bit about localization. I will be the first to admit that I am not the best with a language other than my native tongue. I can’t imagine the pressure of translating dialogue into another language, let alone English. However, there are moments where the dialogue is so poorly translated that it steals the player away from immersion into the experience. This brings me back to the opening point.

The capacity in which my idea were bandied around is no where near anything professional. Yet, even that was a challenge. Even if we were to use an array of outside assets or a tool like RPG Maker (much like Lonely In The Winter does), there was still a story to finish, characters to develop, a plot to solidify, and so much more. Even though it was the tiniest of tastes, game development is challenging. That being said, Lonely In The Winter has a lot of room for improvement. There are segments of the game that are so poorly optimized that frame rates plunge into territories where modern titles do not dare tread. But. hey, at least they tell you it is going to happen. 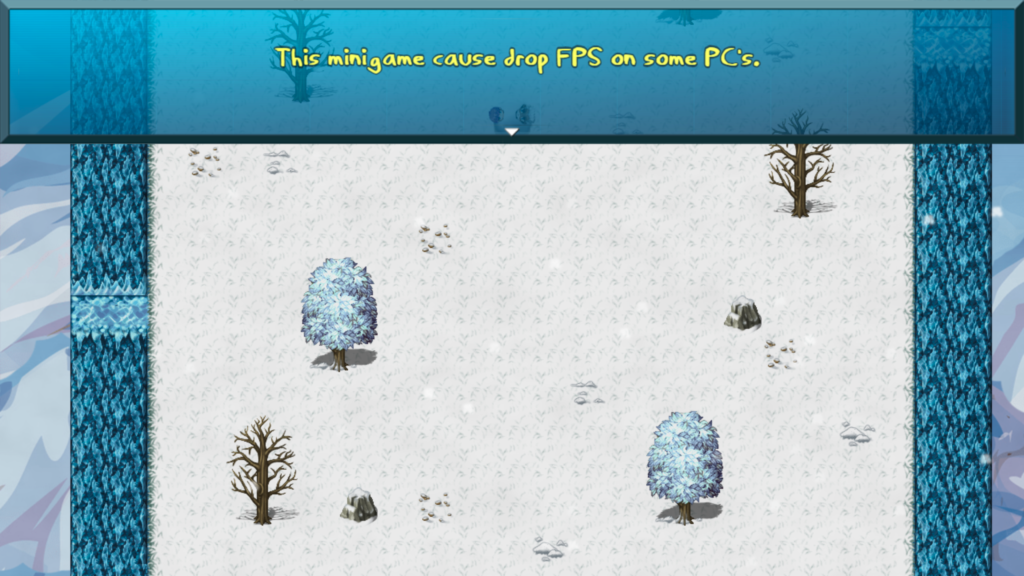 This is all a shame because I really wanted Lonely In The Winter to scratch a longstanding turn-based JRPG itch. Unfortunately, it just falls short. I really want to see it to developed more with a bit more care and polish. There are the trappings of an interesting story, but it is going to require a whole lot of reworking to make it happen.

In its present state, Lonely In The Winter feels like it was release way too early. As a result, it has sacrificed a lot of quality, trading its potential for a lesser form of what it could be. That being said, it is only asking you to sacrifice $3 USD on Steam.

Tags: 90s JRPG, indie, rpg maker, steam, turn-based rpg
Summary
Lonely In The Winter is a turn-based JPRG that falls a bit short of where it could be. With poorly optimized moments which cause frame rates to tank and a story that feels inconclusive, it feels like an Early Access title more than a completed project. That being said, the story does have some potential if it were fleshed out more. If you are looking for a JRPG, but want to be limitedly invested, Lonely In The Winter is not a bad evening distraction.
Good
Bad
4
Poor 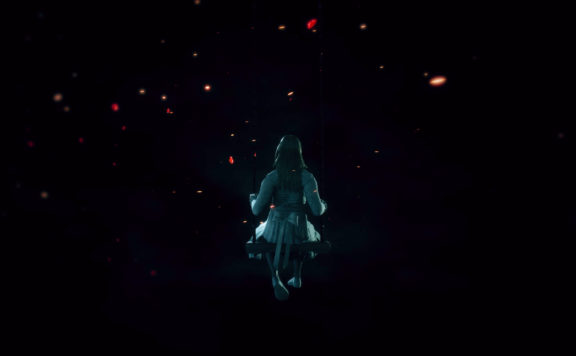 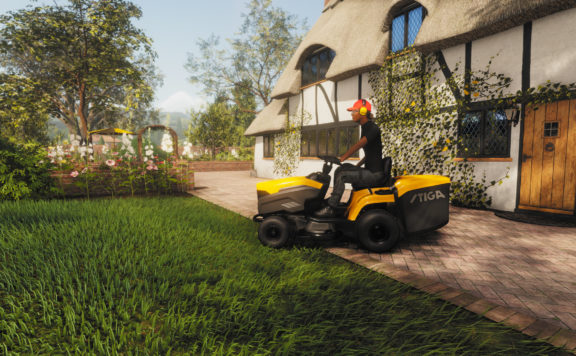 I had an idea for a video game once. I even had some friends who were interested in seeing it happen. The more that I wrote the story, the more I realized just how much work it was going to take to make that happen. In the meantime, the fri...
0
Average User Rating
0 votes
Have Your Say!
Your Rating: 0
Submit
Write A Review