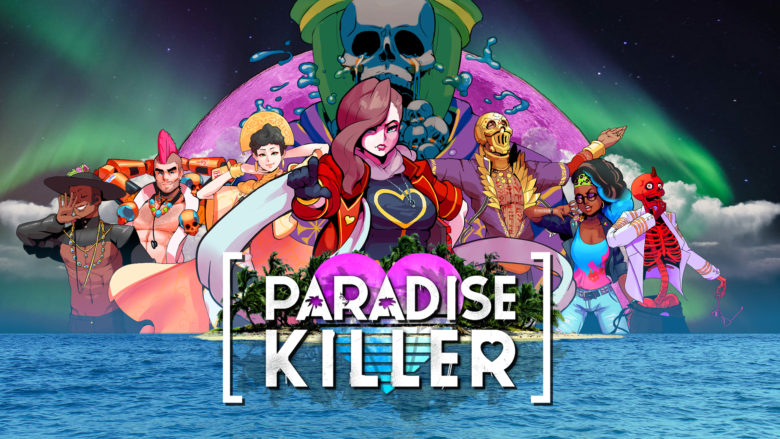 Paradise Killer by developers Kaizen Game Works and publisher Fellow Traveller is coined as being a “first-person open-world murder mystery”. As coin phrases go that one is certainly intriguing and, in my case, alluring. Based on that description alone I dove head-on into reviewing this first-person game. I came looking for a murder mystery game. What I found is a strange and quirky universe that somehow managed to pull me in and maintain my attention. Welcome to our Nintendo Switch review of Paradise Killer!

Paradise Isn’t All It’s Cracked Up To Be 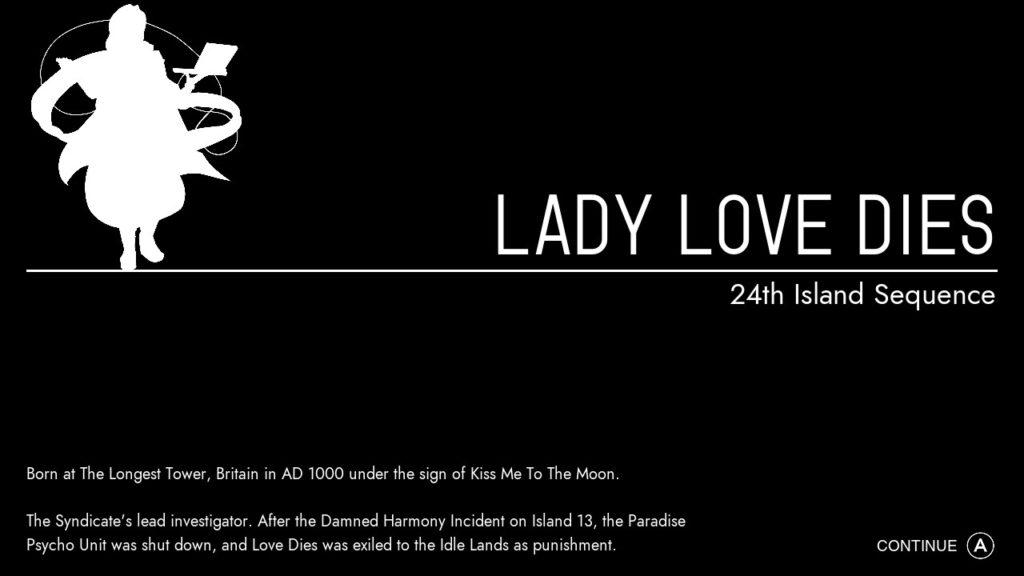 The first thing that Paradise Killer will make you take notice of is its slightly quirky lore. The game has an almost retro Austin Powers / Cate Archer allure to it. You’ll play as the main character an investigator known as “Lady Love Dies” which the name alone should spark some Austin Powers’ memories.

The background of the world you’re playing in is a bit confusing without some background knowledge going in. This is one of the game’s faults, not explaining this concept from the start.

The premise is you exist on an “island outside of reality” named “Paradise”. You co-habit with a rogue human civilization who are hoping to resurrect some dead alien gods. Oddly enough the island regenerates every few millennia. The psychic power that is released during regeneration is meant to feed and eventually resurrect the fallen deities. One side-effect of this process is that this force also attracts undesired interest from demons. These demons eventually corrupt each island until a new alternate reality is birthed by the board of leaders known as the Council. The system isn’t perfect, but it might be one day, perhaps on Perfect 25, which is the next island to be generated. But on the eve of the new island’s rebirth, the Council is murdered and you are called upon to find the murderer.

Take Me Down To Paradise City 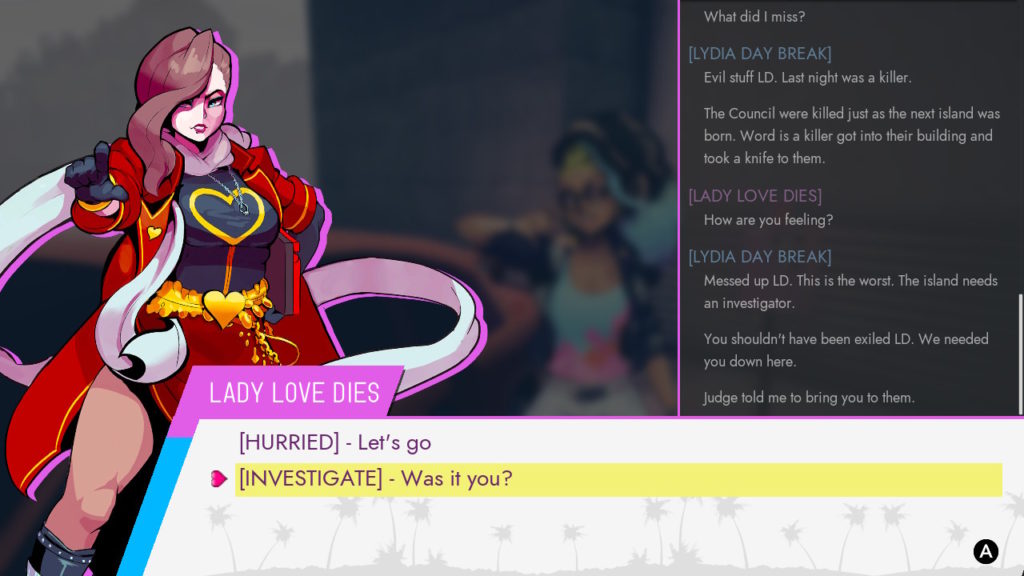 If you can follow the story, even remotely, what you’ll be treated to is a fun and intriguing first-person open-world game that is not a “shooter”. Your goal is to walk around the island and interrogate “people”, some quite diverse, look for clues, etc. to figure out who the killer is. Dialogue encounters with NPCs contain some coined vocal phrases and still animations. In some cases, you’re given dialog choices to direct the questioning flow and control how much probing you’d like to do. 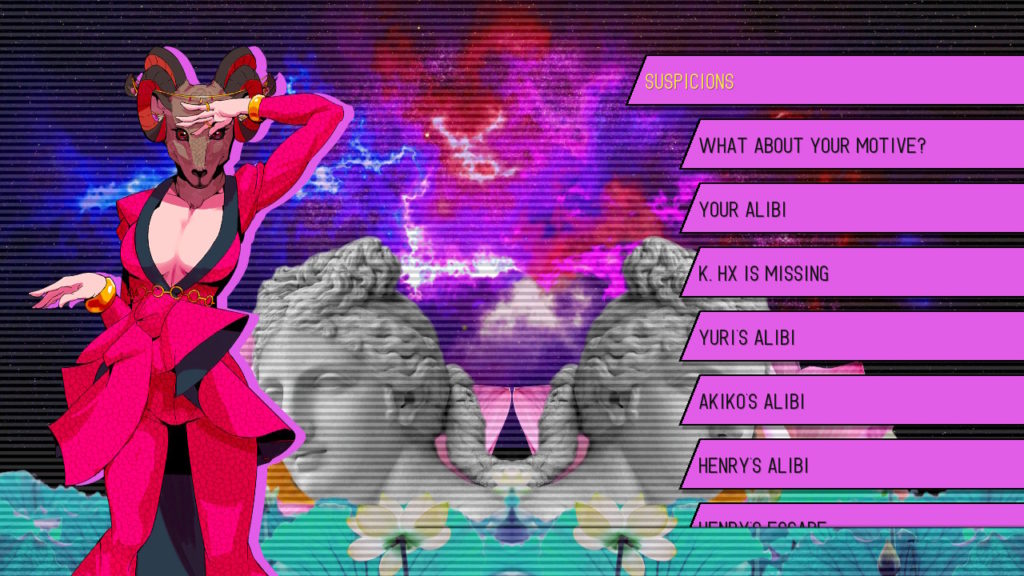 Meet Crimson Acid, a woman with plenty of information.

As far as the diverse NPC characters you’ll encounter if anything they can’t be considered boring. Each one of them has a unique look and story to tell. Some can be “bought” to give you more clues to add to your investigative notebook. 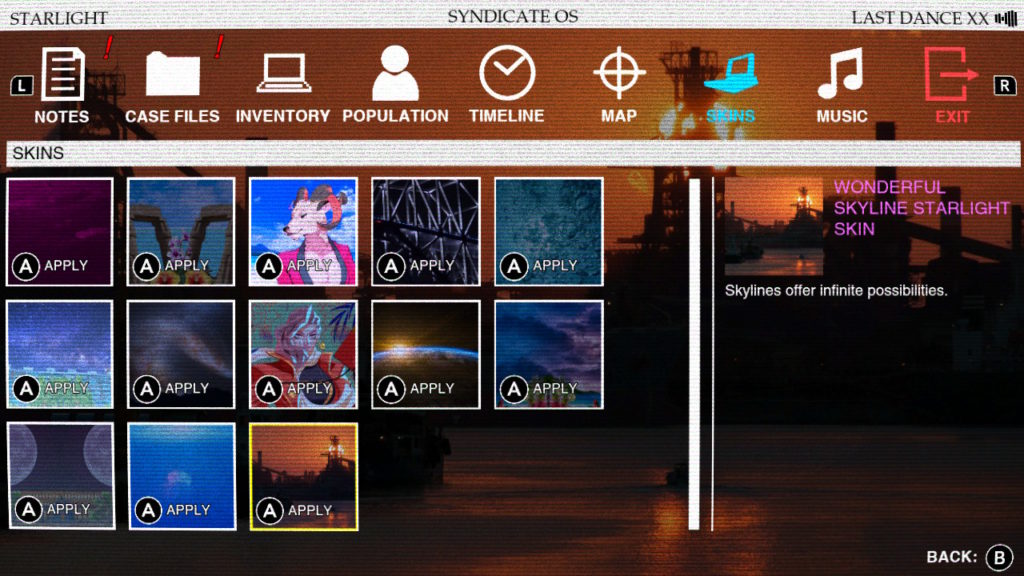 Eventually, you’ll acquire your own “Starlight” which is like your own personal computer to track dialogue, case files, points of interest, etc. This Starlight system is quite detailed and styled perfectly into the game’s universe. You can even change skins on the Starlight’s background/wallpaper. These “skins” are found throughout the game, without giving too much away.

Oh I Have A Mystery To Solve? 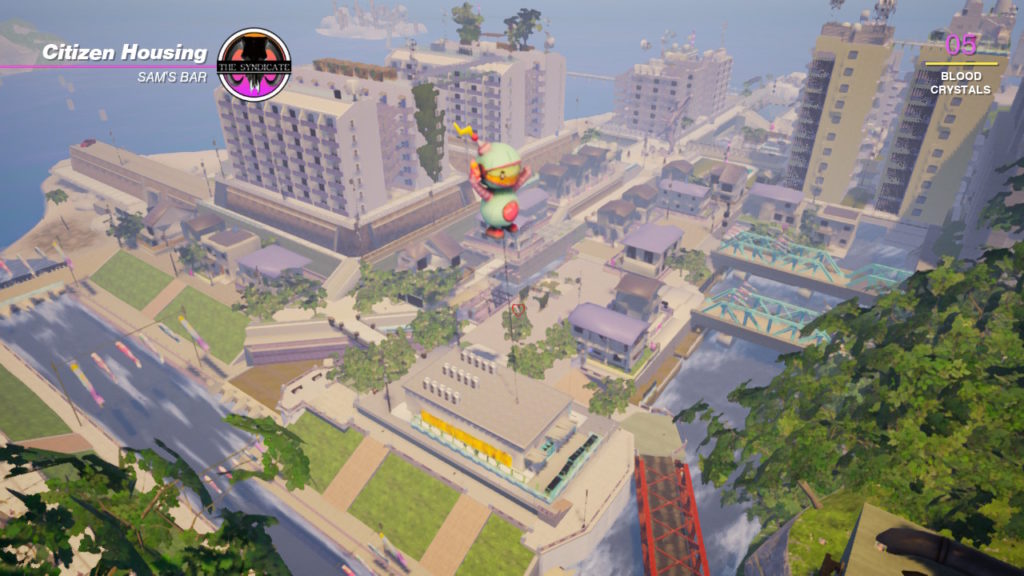 One of the things Paradise Killer does so well is its fluid controls on the Nintendo Switch coupled with a beautiful open world concept. You’ll easily get lost, and off-track, as you flawlessly move from one part of the island to another. 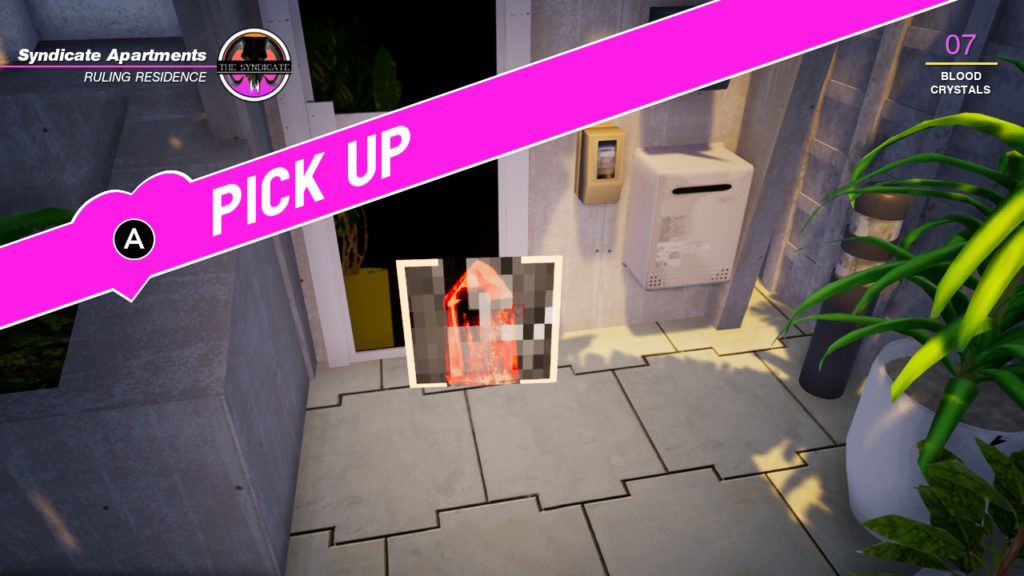 These are worth exploring for!

The game also rewards exploration. As you explore you’ll find “blood crystals”, the game’s currency, and relics that flesh out the game’s lore. Blood crystals can be used to unlock fast travel points, or buy information, etc. Exploration is also awarded by finding “music clips” that can be added to your background soundtrack with customization on how they play. The music in-game is also intriguing with several hummable instrumental tunes. 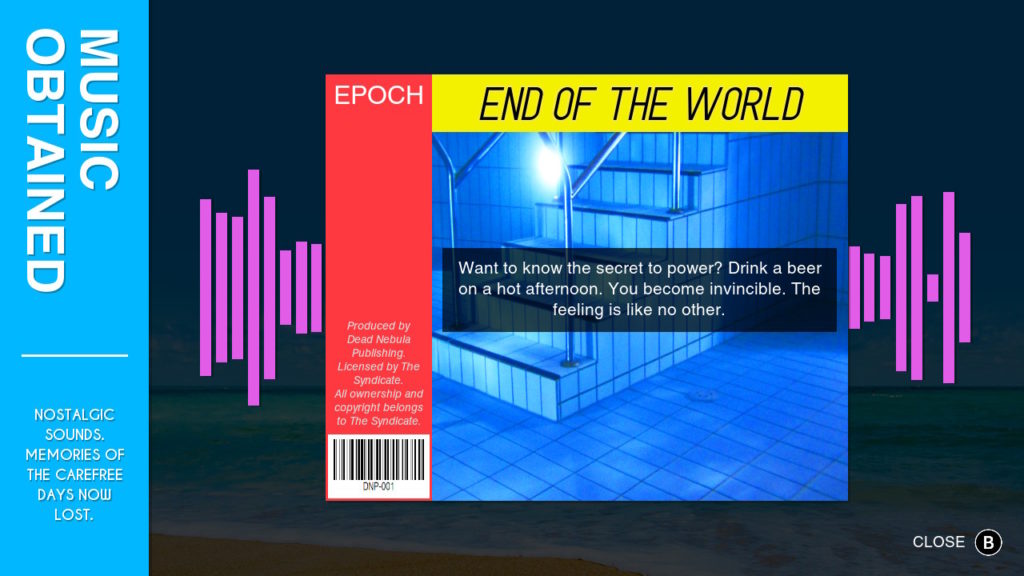 Another reason to explore!

With so many reasons to explore you’ll easily get off-track, and lost even. The game does have a map function but it’s quite obtuse to use and not terribly helpful. Some of these exploration items are in tricky places to reach. Many requiring first-person jumping exercises which adds another layer to the game. Speaking of puzzles. There are several doors that need to be “hacked”. Hacking in this case involves image puzzles that are fun and not terribly frustrating or challenging. Of course some of these image “keys” need to found/unlocked. 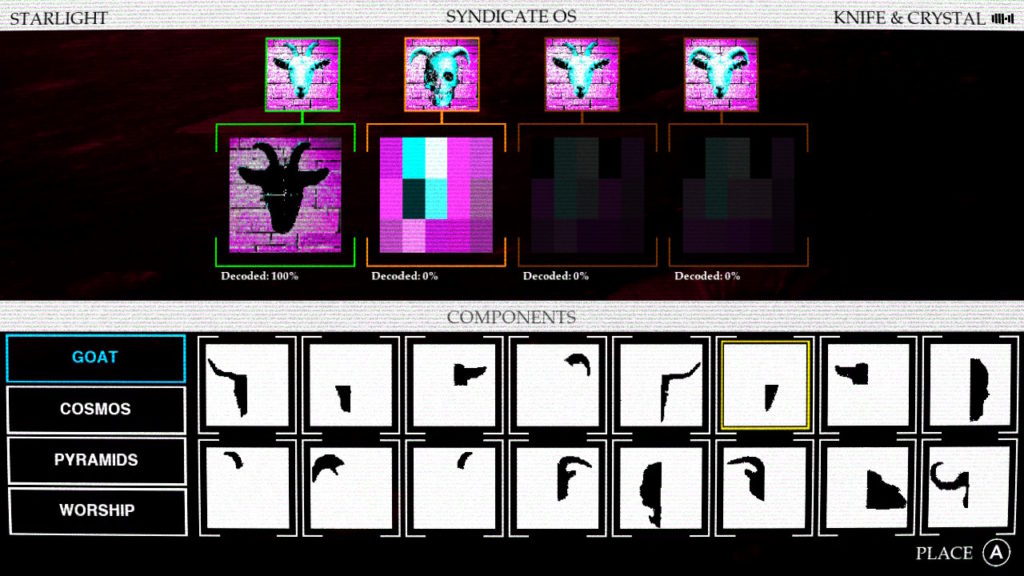 Paradise Killer incorporates no “autosave”. The only way to save is to find a save point. Initially, I was afraid this would become an issue but these save points are abundantly about. Also, at these save points you can also unlock a fast travel point if you have the blood crystals to cover the “unlock”. 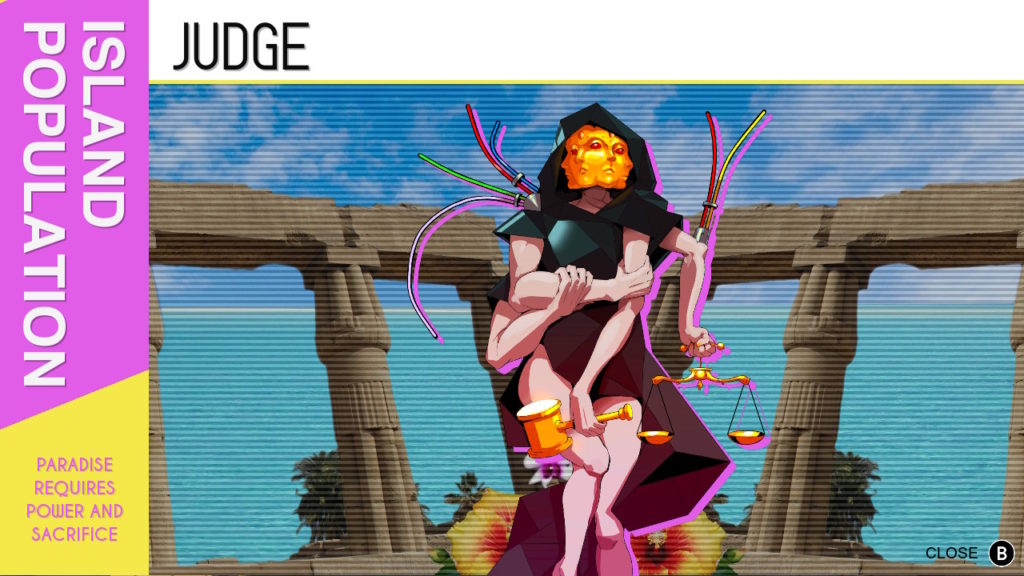 Paradise Killer plays exceptionally well in undocked mode. First-person movement skills like running, jumping, and crouching were easy to pull off. Movement is fluid while still maintaining the utmost control, overall better control than most first-person shooters I’ve tried on the Nintendo Switch.

Tags: Fellow Traveller, first person, Kaizen Game Works, Murder mystery, Open World, Paradise Killer
Summary
Paradise Killer takes place in one of the most bizarre universes one may ever partake in. There are certain elements of the game that lend itself to a retro feeling detective game replete with a tasteful, customizable soundtrack. While the universe and its semantics might throw you a curveball once in a while you'll easily get lost in the large and beautiful open-world. Couple that with a rewarding exploration and puzzle system and you might just forget that you have a murder to solve!
Good
Bad
9
Amazing
Previous ArticleThe Final Rebuild of Evangelion Movie Has A Release Date In JapanNext ArticleBlizzard Stops New Content Development for Starcraft II 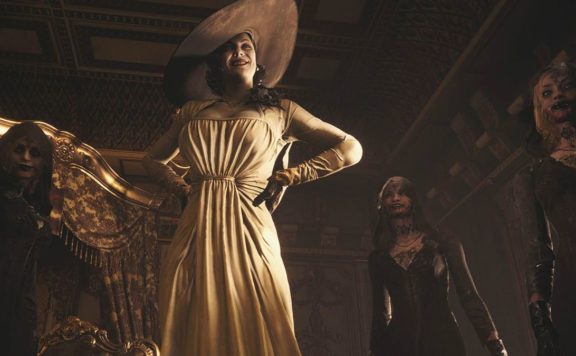 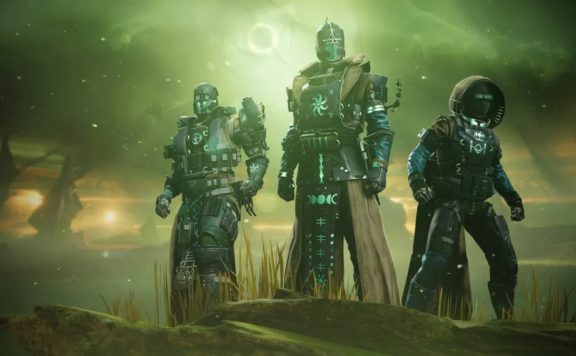 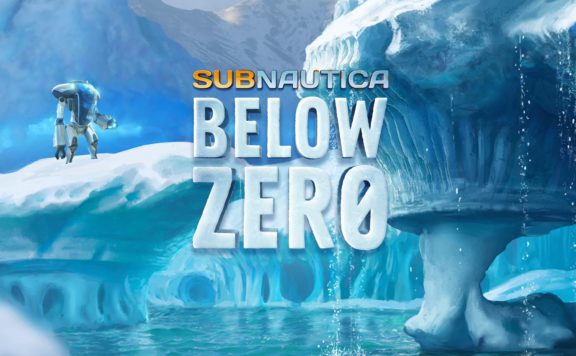 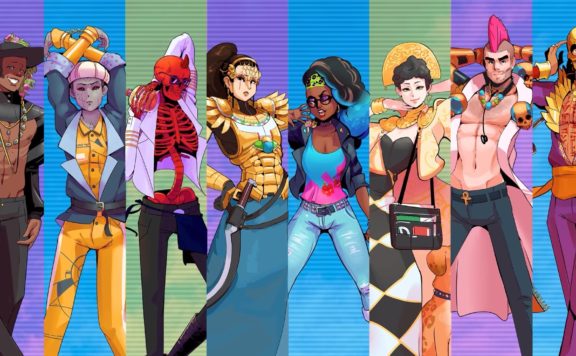 Paradise Killer and Seed Hunter Added To The Plus9 Game Club
July 14, 2021 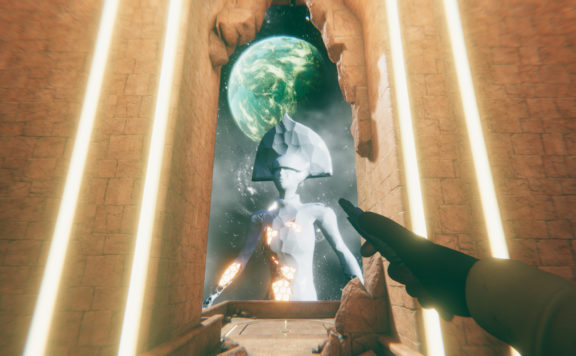 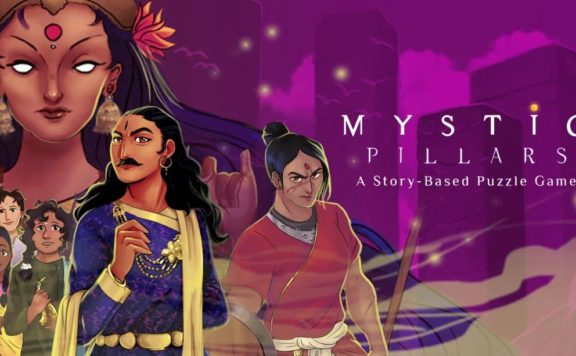