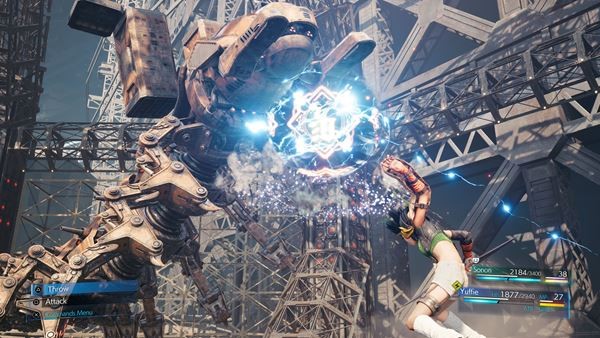 Genshin Impact isn’t the only game getting a PlayStation 5 upgrade. Gamers waiting for the PlayStation 5 powered port of the award-winning Final Fantasy VII Remake now know just how much more to expect, thanks to an press release from Square Enix.

For those not in the know, The classic PlayStation JRPG Final Fantasy that got its very own modern remake back in April 2020, is due yet another next gen update with the release of Final Fantasy VII Remake Intergrade. This PlayStation 5 version of the well received replay of many childhood memories comes in two parts. Owners of the PlayStation 4 Final Fantasy VII Remake will get to bolt on a modern set of graphical and gameplay enhancements that should make the whole experience even slicker than it already looks. As well as a free upgrade, there’s also a stand alone episode designed specifically for the newest Sony system and titled FF7R EPISODE INTERmission.

Starring a warrior named Yuffie Kisaragi, the new episode finds players off to infiltrate the shadowy Shinra Corporation and attempting to steal a powerful material that will restore glory to Yuffe’s homeland. Today’s detailed preview from Square laid out a wealth of detail on Yuffe’s combat abilities and the foes she will take on. As a member of Wutai’s elite corps of ninja operatives, her Unique Ability allows her to throw her iconic massive throwing star at enemies. After unleashing an oversized throwing star, Yuffe can follow through with long-range ninjutsu and elemental abilities to overpower enemies. This isn’t the only attack available to Yuffe, with other abilities like Banishment and Windstorm providing plenty of flexibility as Yuffe modifies their elemental affinity for maximum damage.

As well as more information on the rest of Yuffe’s comrades, we now know the names of the English voice cast for this new entry in the Final Fantasy series:

With voice actors like Suzie Yueng, who has worked on series like Attack on Titan and High Rise Invasion, o board we are in no doubt the new Final Fantasy VII Remake Intergrade update will sound as good as it looks, and it looks incredible. You can check out more about the new PlayStation 5 upgrades and episode over on the Square Enix press page or head over to our PS4 review of Final Fantasy VII Remake and work out if it’s worth catching up before the update hits.

Written by
Ed Orr
For those of you who I’ve not met yet, my name is Ed. After an early indoctrination into PC gaming, years adrift on the unwashed internet, running a successful guild, and testing video games, I turned my hand to writing about them. Now, you will find me squawking across a multitude of sites and even getting to play games now and then
Previous ArticleNaraka: Bladepoint – 4K NVidia DLSS Comparison TrailerNext ArticleMass Effect Legendary Edition Comparison Trailer Shows Off Graphical Upgrades