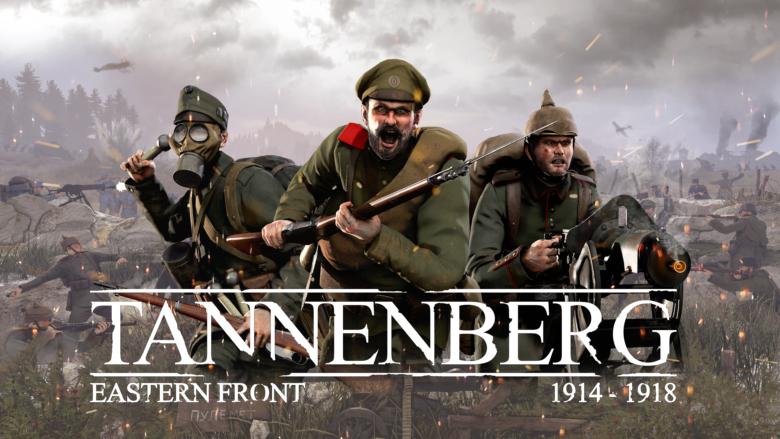 Bulgarian troops join the fray, and wolves are at the door…

ALKMAAR, THE NETHERLANDS – February 13, 2018 – Blackmill Games and M2H have just released their WW1 shooter Tannenberg on Steam. The second entry in the WW1 Game Series surprises the community with new content and reveals a historical event in early Spring!
Bulgarian forces join the Central Powers in the authentic WW1 FPS, bringing a new map and new weapons to the Eastern Front. Watch the Tannenberg feature trailer here:

Players can get Tannenberg now on Steam with a 15% discount – or a 25% loyalty discount if they already own Verdun, the first game in the series.

Bulgaria enters the battle for Dobrudja!

The trailer shows Bulgaria joining the fight, and they bring a batch of new equipment with them! New firearms include the Berdan II rifle – a Russian designed weapon that the Bulgarians would use against them in WW1. Not all new weapons added with the release are in Bulgarian hands – for instance the Russians get the Berdan II rifle, while the Roumanians gain access to the British designed Martini-Henry rifle. Although it first saw action in 1871, it was still effective enough to be used when supplies of other weapons were short.

The new Dobrudja map will see players do battle with a view of the Danube river, as they attempt to seize control of key hilltop fortifications while holding off flanking attacks through the valley trenches below! Combined with the other maps already in the game, it means that players can now fight over territory representing battlefields from the Baltic Sea to the Black Sea!

Co-founder Mike Hergaarden says: “Inspired by the Dobrudja region, the new map showcases our commitment to creating authentic locations. We’ve done careful research to create something which reflects the challenges that soldiers on the Eastern Front would have faced.” Other battlefields in Tannenberg include a small village on the flat plains of Poland, a damaged armoured train in a hilly region of Galicia, a church at the centre of a valley in the Carpathians, and fortified Mount Cosna in Roumania.

This last iconic battlefield was added alongside a Roumanian squad following a vote asking players if they wanted to see Roumanian or Bulgarian troops added to the game. However the result was a close one… so the developers decided to add Bulgaria as well! The community has been great during Early Access, and in addition to the two new factions, recent months leading up the release have seen a flurry of other updates in response to their feedback. In particular the sectors, squads and roles within them are now even more distinctive. Pick the Austro-Hungarian K.u.K. or Russian Frontovik squads for long range rifles and heavy artillery support, Cossacks or German Infanterie for melee assaults and taking ground, or the Roumanian and Bulgarians to hold key sectors against enemy counter-attacks. Support call-ins have been further balanced, with options including gas, artillery, smoke, and recon planes.

Wolves at the door…

There has been a range of historical events hosted in Tannenberg and predecessor Verdun, from the Christmas Truce and Remembrance Day to player organized reenactments. The developers have announced a new event for Spring, based on a lesser known truce reported by an American newspaper… the ‘wolf truce’. The paper described Russian and German soldiers forced to hold a temporary ceasefire by huge packs of ravenous, starving wolves. Although there may be more than a little exaggeration in the story, it makes for an interesting what-if scenario, and during the upcoming event when the wolves start howling, players will need to decide whether or not to hold a ceasefire of their own…

It all started out on the Western Front with the release of the first authentic WW1 FPS Verdun back in April 2015. After several free updates to Verdun including the recent Senegalese Tirailleurs squad, the release of Tannenberg in February 2019 expanded the series to include the Eastern Front. The WW1 Game Series throws players into intense warfare inspired by the chaos and fury of iconic battles from the First World War. With over a million games sold, this novel and underserved setting has proven popular with the gaming community!

Players choose from a variety of historically accurate squads and weapons before diving into the mud and blood splattered battlefields of the First World War. Every game is built on a base of thorough research and post-release support bringing new content and challenges for our players. The games in the series share a dedication to historical authenticity and each one provides a different experience, reflecting the nature of the fighting in the many-sided theaters of the war.

M2H and Blackmill Games released Verdun, the first entry in the authentic WW1 Game Series on Steam Early Access in 2013, and it was released on April 2015. The game was a great success, and went on to see releases on PlayStation®4 and Xbox One, along with many free updates. The sequel Tannenberg, set on the Eastern Front, released from Steam Early Access on February 13th, 2019.

Written by
Chris Bowman
Long time game enthusiast and writer. I have beta tested a lot of Mmorpg's since I was thirteen including Star Wars Galaxies, Lord of the Rings Online, and Star Wars The Old Republic. Currently attending The Art Institute of Pittsburgh for a degree in Game Art and Technology.
Previous ArticleSteam High Five – Feb 15th EditionNext ArticleHeavy Metal Machines Launches eSports Season