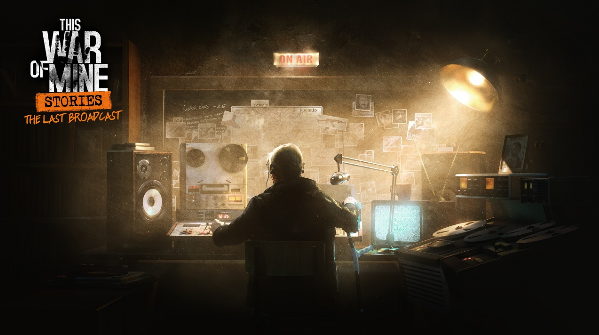 THIS WAR OF MINE DEVS TEAM UP WITH MEG JAYANTH, WRITER OF 80 DAYS, TO DELIVER ‘THE LAST BROADCAST’, THE SECOND PIECE OF STORY DLC FOR THE GAME.

October 31, 2018 — It took more time than initially expected, but here at 11 bit studios – where we iterate games hundreds of times to make sure what you’re served is an utterly thrilling story – it’s not entirely unexpected. We’re proud to finally announce that This War of Mine: Stories second DLC, The Last Broadcast will be coming to PC on November 14, 2018.

Everything began after the first episode, Father’s Promise, when 11 bit studios joined forces with exceptionally talented game writer Meg Jayanth, most known for 80 Days (IGF winner for Excellence in Narrative), to create a new story for This War of Mine. Based on a scenario by Meg, we present to you The Last Broadcast, the newest installment to This War of Mine: Stories.

The new episode will launch on November 14, 2018, to mark the 4th anniversary of the original release of the game. Over the course of development, this story grew much larger in scope when compared to Father’s Promise. Tomasz Kisilewicz, Project Lead, says;

“Surely it took us a while, but the focus was on delivering a deeply emotional story. The leading theme circles around the price of telling the truth.

In this addition, we’re introducing a lot of new content with different endings, new gameplay mechanics, new moral dilemmas about telling the truth that influence the world, new playable civilians, a new shelter people can live in, and new sites of the city of Pogoren to visit. It had to be at least as good as the other stories you can find in This War of Mine. For this reason, after we received the scenario from Meg we iterated on the episode an enormous amount of times afterward. We had to make sure that in the end, the community would have a story they expect from us and we couldn’t let them down. And now that The Last Broadcast is releasing, I’d like to say ‘enjoy The Last Broadcast’, but perhaps the better wording is actually ‘experience The Last Broadcast’.”

This new episode will be priced at $3.99 USD. Due to the significant growth of this DLC, the season pass will change from its price of $4.99 to $6.99 on November 14, 2018. We strongly encourage players to act now if they want to get this great content before the price increase! Everyone who has purchased the season pass to date will receive all of the content without any additional cost.

The Last Broadcast will be available on Steam, GOG.com, Humble Store and others.

Written by
Chris Bowman
Long time game enthusiast and writer. I have beta tested a lot of Mmorpg's since I was thirteen including Star Wars Galaxies, Lord of the Rings Online, and Star Wars The Old Republic. Currently attending The Art Institute of Pittsburgh for a degree in Game Art and Technology.
Previous ArticleSteep: X Games Launch TrailerNext ArticleGrim Fandango Remastered Has landed on Nintendo Switch