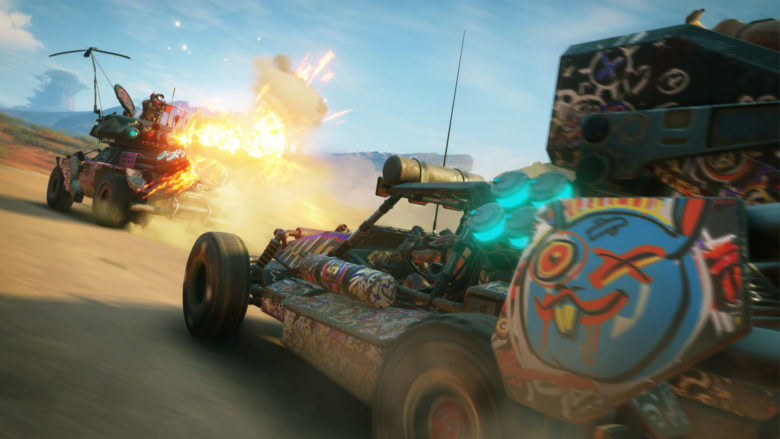 Rage 2 players who can’t get enough of the insanity will find a lot more to enjoy when the Rise of the Ghosts content expansion launches later this month. Players on PC, PlayStation 4, and Xbox One can look for the new content starting on September 26th.

Rise of the Ghosts will bring lots of new things to explore including a new region complete with a brand new story. The region is “littered with the cannibalistic, Feltrite-infused Ghosts”. To assist in taking them on, players will gain access to the Feltrite Laser Launcher and have a new Void ability to try out. While taking out the Ghosts, players can tool around on the Ghost Motorcycle as well.

The Rise of the Ghosts DLC is part of the Deluxe Edition so owners will receive it as part of their original purchase. Those who do not own the Deluxe Edition can purchase the DLC separately for $15 from the in-game store. In addition, players can upgrade their game account to the Deluxe Edition. Doing so will net the DOOM BFG, Wasteland Wizard Cheat Codes, Progress Booster, and the Battle Standard vehicle banner.

An asteroid has annihilated 80% of the earth’s population, and humanity’s numbers are dwindling. Ruthless and bloodthirsty gangs roam the open roads and the tyrannical Authority seek to rule with an iron fist. As Walker, the last Ranger of the wasteland and a threat to their power, you have been robbed of your home and left for dead. Now you’ll have to rage for justice and freedom. With ludicrous vehicle combat, super-powered first-person mayhem, and an open world full of emergent madness, you will tear across an unforgiving wasteland battling sadistic gangs to find the tools and tech needed to crush the oppressive rule of The Authority once and for all.

Written by
Suzie Ford
Suzie is an avid gamer and has been since 1995. She lives in the desert with her own personal minion while dreaming of pixel worlds beyond Earth.
Previous ArticleSIMS 4 Preview: Realm of Magic, Mischief and MayhemNext ArticleKingdom Hearts III Re Mind DLC – TGS 2019 Trailer