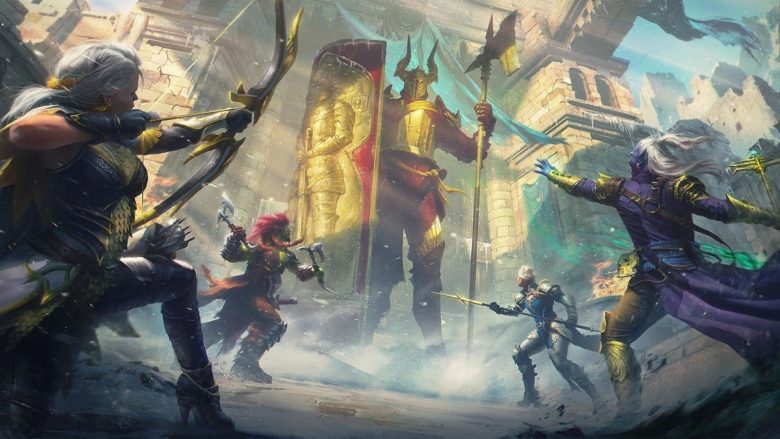 We didn’t try Raid: Shadow Legends until quite late after its initial release in early 2019. We’re massive fans of RPGs and love immersive, story-based gameplay. Raid is a turn-based battle game, and it has several elements that we loved.

It follows a pretty standard gacha format, where players collect characters, build and upgrade their team, and take part in various types of campaigns and missions. The gameplay is made up mostly of a continuous procession of turn-based battles in a variety of environments. We’ll kick off by saying that if you’re a fan of this genre, then it’s definitely worth giving a go.

The main thing that we liked about it was that it’s a story-driven, adult RPG – think more Lord of the Rings than Final Fantasy. The aim of the game is to journey through the environs of Teleria, grow an army, and ultimately defeat the main antagonist Dark Lord Siroth, who has subjugated vast areas of the fictional world.

The broader structure of the game (as opposed to the battle dynamics) is relatively straightforward. Players can access three main modes: campaign or story (player vs. environment), arena (player-vs-player), and dungeons, where players can gain experience points and collect items like potions and gear. The dungeons area, which has its own bosses, was a nice addition and works well alongside the main campaign mode. The arena mode is great for battling other players and boosting your rankings.

Team-building is done by collecting crystals or “shards” and exchanging them for new characters. There are different types of shards and, as you can probably guess, the more valuable shards unlock rare characters.

All in all, we found that the characters, which span pretty much every kind of mythical creature you can think of, were very well-thought-out and interesting. There’s over 300 unique characters from 16 factions. The storyline, soundtrack, and vocal narrative are also pretty solid.

So what about the gameplay itself?

The graphics are one of the game’s biggest selling points, and it’s been roundly praised by players for the quality and originality of its artwork. You’ll quickly lose yourself in the beautifully-designed and atmospheric settings as you progress through an array of environments, populated by different enemies, across thirteen locations.

The battle engine, which includes an auto setting that’s useful when you’re re-running levels to gain experience, is turn-based. Overall, the mechanics are very clean and fluid, and the effects are compelling. Characters have a choice of several actions, with varying degrees of damage potential, which change and evolve as more skills are unlocked. The one downside, in my opinion, is that gameplay can get a bit repetitive after a while. But the excitement of putting together new teams and varying the ways you deal with different enemies makes up for this somewhat.

One of the things we most liked is that there’s a strong strategic element when it comes to selecting your team and picking together characters that perform optimally in specific battle scenarios. There are a few different mechanics, such as affinities, gear selection, champions, and more, that make your choices quite important.

You’ll also have the opportunity to join a clan (there are lots of clans open to beginners) and take part in cooperative challenges to win rewards. Clan challenges have unique bosses, which makes things even more interesting.

So what about the downsides?

Raid follows a pretty standard gacha, turn-based battle format. So if you’re looking for something completely original, you may be left disappointed. If you’re a fan of this style, however, you’ll struggle to find a better-executed title.

If you want to fast-forward to a point of being able to compete with top players, you may need to spend a few bucks here and there. With that being said, to say that this is a bad game simply because there’s a pay-to-play element isn’t fair. You don’t build a loyal following of tens of thousands of users by providing a sub-par experience. The graphics alone make the game incredibly engaging, and the characters and lore associated with each area of the world add an extra layer of interest. It’s also difficult to overstate the excitement of building your team.

So with all of the points above in mind, here’s our final conclusion:

Raid: Shadow Legends is a good game. It’s not perfect, but it’s certainly worth a go. You can get a lot out of it without paying. And while it lends itself well to intensive gaming, the auto-battle option also makes it well-suited to casual players. Equally, you don’t need to spend hours and hours familiarizing yourself with the game mechanics and features to start progressing seriously.

Give it a try: