Back in the mid-80s, the real first video game system for a lot of people was Nintendo’s 8-bit NES. If you fancied yourself as an adventure gamer in those days, not that many “gamer genres” existed back then, you no doubt owned Shadowgate for the NES. Originally developed for the Apple Macintosh, the series saw itself ported to many of the now older console systems including the NES and Nintendo 64. Shadowgate saw a comeback in 2014 as it was “Kickstart” funded and then hit Steam with a PC port. Now developer Abstraction Games has brought a re-imagined Shadowgate experience to the newer consoles including the Nintendo Switch. This is our review of Shadowgate on the Nintendo Switch!

If you never played an iteration of Shadowgate, as a series, it’s the ultimate point-and-click adventure game. Each hand-painted screen is typically considered a “room”. You usually see things in front of you and start to hunt with your cursor for objects to interact with. Typically, you’re presented with text giving you an overview of what’s before you. You need to pick up and interact with objects, look at an object, combine objects, etc. In it’s purest sense it’s an old-school point-and-click Fantasy adventure game. If action gaming, performing timely combos and platforming are your “things”, then you’re most likely in the wrong review.

Shadowgate‘s story premise is pretty straight-forward. You take up the role of “The Seed of Prophecy” as you travel deep into Shadowgate castle, in hopes of defeating the evil dreaded Warlock Lord. Shadowgate is a first-person adventure game about map and inventory management and solving riddles and puzzles, not just some but lots of them. 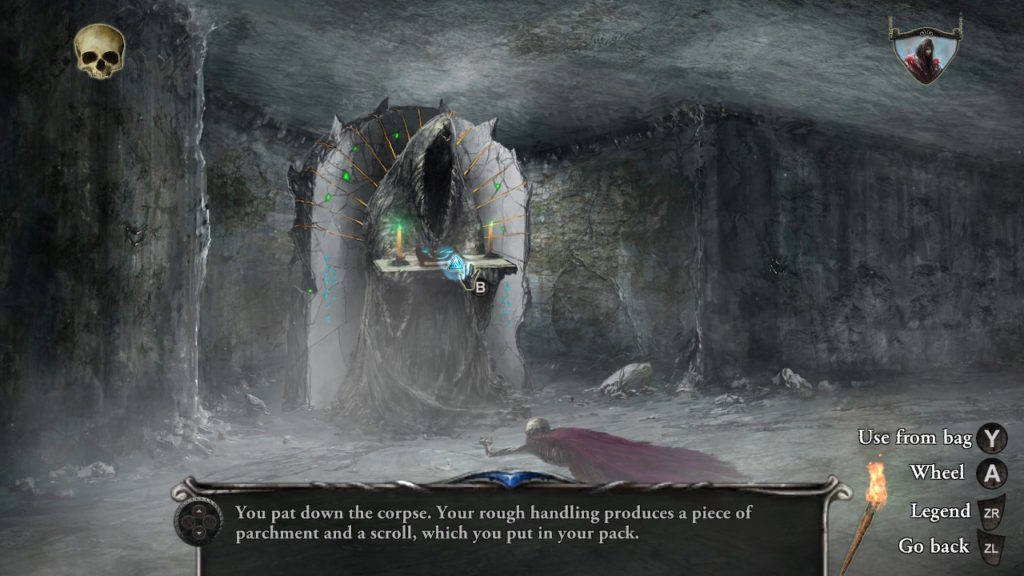 Go ahead, touch it! We dare you!

Abstraction Games insists that this isn’t merely a straight port but they “re-imagined” Shadowgate from the ground up and have re-designed over 90% of the puzzles. That seems to be a fair and accurate statement. Side by side this version looks and feels different from it’s NES forefathers, but maintains the core concepts. So how does this Switch version stand up on its own?

For starters, the user interface (UI) is the sub-system you’ll be spending a lot of time with. Unfortunately, the Switch UI comes off as being a bit cumbersome for some reason. You have a wheel with a list of your commands and a tri-wheel (three wheels within wheels) for your inventory which is navigated with “L” and “R”. Then you have an on-screen cursor to navigate. To be quite honest, the UI’s use challenges can be attributed to having so many commands at your disposal. With some practice and time in the game, it becomes second nature. Just be prepared early on to accidentally “use your skull on a chest” and other “silly” gestures until muscle memory kicks in. 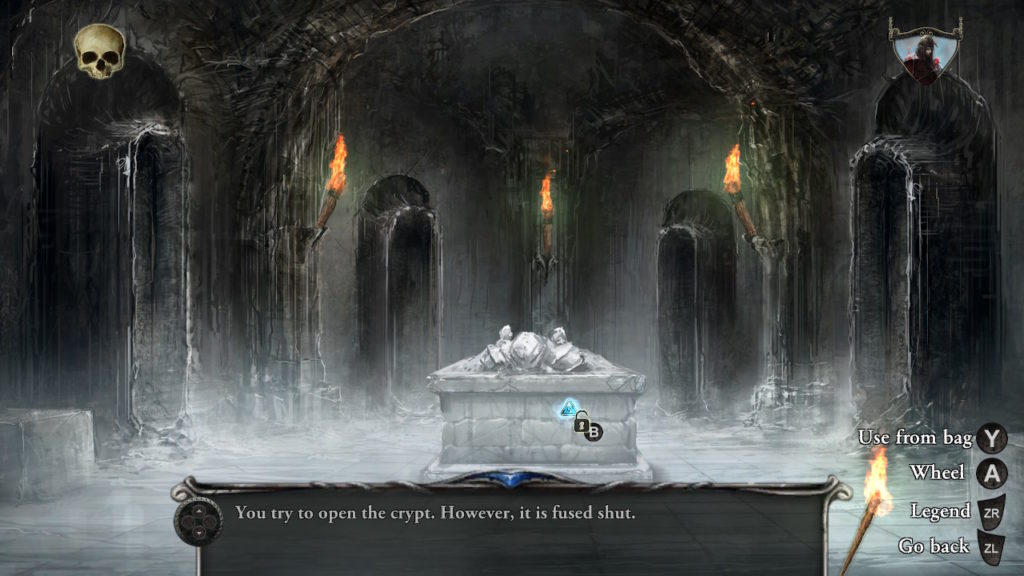 There Are Many Things To Fight Valiant For

There are many reasons to be happy with this Shadowgate version. The puzzles and challenges stand up well to the test of time. They are challenging without being annoying. Having a choice of four different difficulty levels really makes for a tailored experience, especially since the game has an in-game hint system that scales with your selected difficulty level. This review was written using the “Classic Medium” difficulty level. This level consisted of fewer hints and having to keep an eye on your lit torch. For the rogue amongst us, there is also an “Ironman mode” that disables saves and requires players to finish the game in one try. This mode isn’t for the faint of heart as “Classic Medium” difficulty was an appropriate challenge even for this puzzle-experienced reviewer.

Shadowgate also supports touchscreen control and plays very well in undocked mode. The game also allows for multiple saves and incorporates a cool quick save/load feature using the left and right sticks. This comes in very handy as the next door might hold death behind it.

Death Comes For You 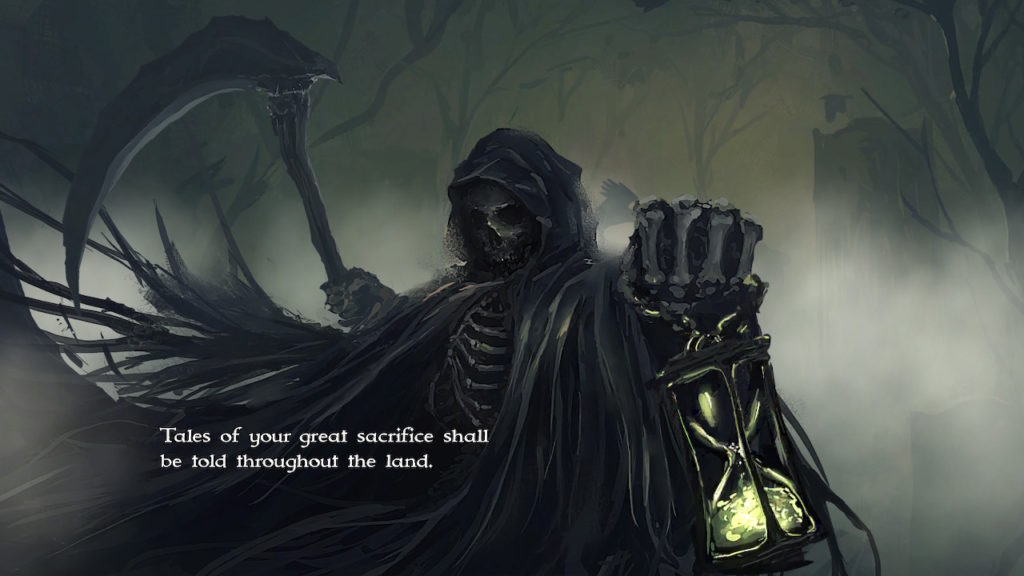 Expect to see this guy quite a bit

There are indeed “deaths” in the game, and be prepared for them. Deaths typically happen when a room provides an obstacle, e.g. fire breathing dragon, that you need to get by within so many “actions” (i.e. turns). Actions, like stepping into a water hole without thought or lifting an unguarded chalice, can lead to the same demise. Shadowgate takes great pride in telling you when you’ve left this realm with a nice Grim Reaper exit screen and voice-over narration about your bad decisions.

Also worth mentioning, though we did not review this mode, the game comes with retro mode options where you can play the game with retro features from 1989. Toggle these three independent options on choose whether to listen to Hiroyuki Masuno’s original chiptunes, move between rooms with pixelated transitions and follow the text in retro format.

Tags: 8-Bit Adventure Anthology, Abstraction Games, Shadowgate
Summary
Shadowgate for the Nintendo Switch is a wonderful rendition of the 8-bit NES version that is near and dear to many of our hearts. This rendition isn't merely a direct port but a re-imagining that still holds true to the classic Shadowgate formula. While the user interface is a bit cumbersome at first, patience and a little time spent in the game will make that an afterthought. For the modest price of $19.99, you can take this classic adventure game on the road. Shadowgate is perhaps one of the earliest point-and-click adventure games conceived and with this modernized version it gets to renew its crown!
Good
Bad
8
Great

Argonus And The Gods Of Stone PC Review – A Mythological Wonder
October 9, 2019

Back in the mid-80s, the real first video game system for a lot of people was Nintendo's 8-bit NES. If you fancied yourself as an adventure gamer in those days, not that many "gamer genres" existed back then, you no doubt owned Shadowgate f...
0
Average User Rating
0 votes
Have Your Say!
Your Rating: 0
Submit
Write A Review