Vikings invaders, Persian magicians, and dark demonic powers all came crashing onto the Nintendo Switch with the release of Swords and Soldiers 2 Shwarmageddon. After a mild delay in cooking up this review, I got time to sit down with Romio Game’s latest adventure last weekend to take a look at this unique helping of 2D MOBA mayhem.

Romio Games are probably most commonly associated with their breakthrough PC hit, Awesomenauts, a side-scrolling MOBA adventure that pit players against intergalactic adversaries. Swords and Soldiers 2 Shwarmageddon takes these battle mechanics as a foundation for this adventure and garnishes the whole thing with an eccentric personality that pits flying carpets against demonic monsters, while a gargantuan herd of sheep rolls mercilessly across the screen. Out now on Nintendo Switch, this unusual adventure first took up swords on WiiU during 2015. Despite sinking without much trace, it received a relatively positive response from the threadbare WiiU community. Hopefully, Romio Game’s more recent experience porting Swords and Soldiers 2: Shwarmageddon to PC and Sony’s PlayStation 4 is a good indicator for what to expect on Nintendo’s mobile platform. 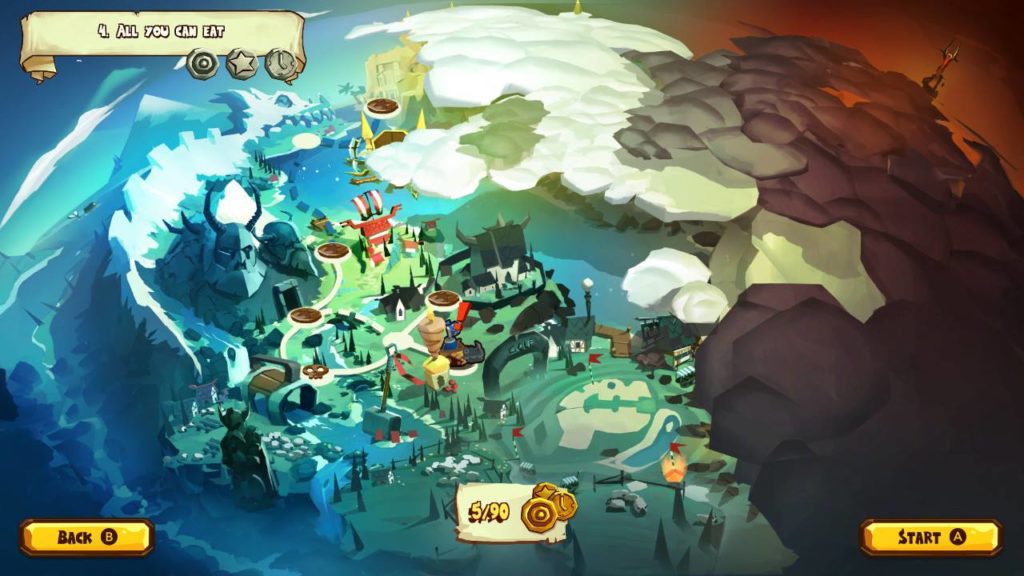 Kicking off in a fictional Viking homestead, Swords and Soldiers 2 Shwarmageddon opens with a monologue from Cheif Redbeard that easily sets the tone for the upcoming adventure. Bright cartoon animation, a host of overzealous voice acting, and some utterly bizarre front line combat designs make for a game that is unlikely to look or feel like much else on the Nintendo Switch and definitely should not be taken too seriously. What follows for players of Swords and Soldiers 2 Shwarmageddon is around ten hours of solo play and a multitude of multiplayer engagements. The first moments of the single-player experience are an innocuous-seeming raid to grab a shiny lamp which quickly spirals out of control. The protagonists are drawn into a quest that swings wildly between the Viking thirst for a good meal, shiny treasure, and just poking out the eyes of the latest person to piss you off. Thankfully the narrative of this offbeat adventure is only ever intended to be a loosely held together bridge between encounters.

Each of these encounters generally revolves around two core concepts, collecting resources and building for battle. Players who roll onto a level in their Viking longboat base will need to gather a mixture of gold and mana blocks in order to craft a range of units on offer. Each of these units is generally unlocked during the game’s solo campaign and provide players with access to a range of weapons which they can launch across the game’s horizontal lanes. Any aspiring Viking Cheiftan getting to grips with Swords & Soldiers 2: Shwarmageddon will need to contend with grunts that can heal themselves, stealth attacks, pits of poison, and suicidal demons that roll rampant across the screen. While new troop builds and even structures are available to counter each new menace that arrives, this expanding roster of weapons, that levels off at around 45 different troop types, does not come with a larger inventory. Instead, construction tiers play a central role in unlocking a powerful army of troops and forces players to manage a stream of currencies.

This mix of resource management and theory crafting starts out as an uncomplicated example of the core concept behind any strategy title. Players begin with a very limited number of build options that include structures, troops, and special mana skills. Given time, the types of challenges, the breadth of choice, and the ways that players can obtain resources become increasingly complex. Despite the huge variety of loutish demons, angry Persians, and Vikings that, float roll, and fight their way across the screen, Sword and Soldiers 2 Shwarmageddon does a more than adequate job of teaching new generals how to keep control their troops as the adventure unfolds. While players make their way across an isometric world map, and things get increasingly complex, the game manages to drip feed new controls and combat mechanics at an adequate pace. Swords and Soldiers 2 Shwarmageddon even goes as far as pausing combat to announce a new system, making sure that players have a chance to understand things before charging in. 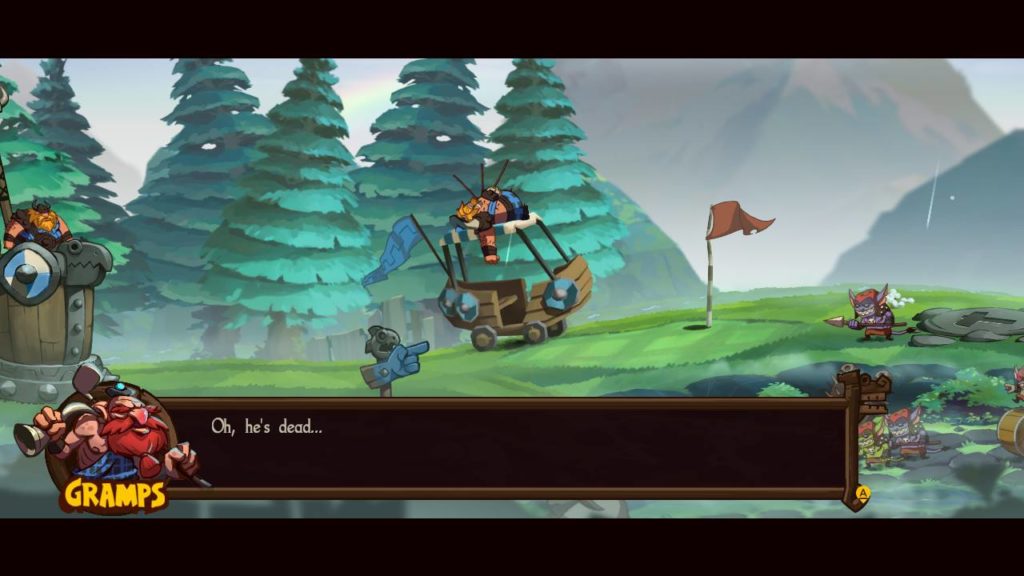 Controls in Swords and Soldiers 2 Shwarmageddon are also well considered. Like the core gameplay mechanics, controls are simple enough that players shouldn’t get lost despite the chaos on screen. Building an army and spending resources is simple enough and controlled using two radial menus, each activated by using one of the Switch’s shoulder-mounted buttons, while other controller inputs are occasionally used to direct units or activate an item, individual unit AI generally takes precedence, meaning players don’t need to micromanage too hard. The Switch’s touch screen also proves handy in a pinch, allowing players to swipe and stab to control some of the on-screen action.

Solo play isn’t the only option for anybody ready to shwarm their enemy with axe-wielding marauders. Swords and Soldiers 2 Shwarmageddo includes a local multiplayer and online matchmaking system that allows players with lots of friends or plenty of enemies to find a challenge. Unfortunately, online matchmaking can be very much hit and miss. On more than one occasion I’ve waited around in the lobby for an age or matched against the same opponent repeatedly. Thankfully, the option to invite online friends or get competitive on the couch means that low concurrent player counts do not equate to a Ragnarök.

While a multitude of troop types, a quirky aesthetic, and an absolutely outstanding soundtrack by Sonic Picnic attempt to keep things fresh, both multiplayer and local battles tend to lack the complexity that Romio clearly intended. Whether because of questionable balancing or min maxing, I found the same troop types and tactics used repeatedly. These encounters turned into acts of attrition that only served to underline how good the game’s solo campaign actually is.

Despite an obvious need to mix things up and curate a more vibrant online audience, Sword and Soldiers 2: Shwarmageddon has plenty that is good about it. The fundamental game mode is solid and Romio Games has clearly learned a great deal from their previous console experience. The core game is frantic without ever feeling overwhelming while controls and unit AI is satisfying in its simplicity. The sights and sounds of this new campaign are undeniably kitsch and an inventive squad of conscripts makes every decision feel meaningful. Online multiplayer might be a bit barren, but if you love RTS, MOBA titles, or even the odd turn-based strategy you might find something to love between the serious fun of Swords and Soldiers 2: Shwarmageddon. Swords and Soldiers 2: Shwarmageddon is out now on Nintendo Switch eShop.

Vikings invaders, Persian magicians, and dark demonic powers all came crashing onto the Nintendo Switch with the release of Swords and Soldiers 2 Shwarmageddon. After a mild delay in cooking up this review, I got time to sit down with Romio...
0
Average User Rating
0 votes
Have Your Say!
Your Rating: 0
Submit
Write A Review