The Dark Crystal: Age of Resistance – Tactics, or Tactics as we’ll refer to it here for our sanity, is a turn-based strategy RPG from the developers over at BonusXP and published by the well-known En Masse (Tera). The story for Tactics directly reflects that of the newly-released Netflix series, transporting the player and their Gelflings to the land of Thra that has been taken over by the diabolical Skeksis. Your job as the player is to lead the Gelflings through a wide variety of combat levels to build your arsenal of friends and reclaim your home once and for all. This is our review of The Dark Crystal: Age of Resistance – Tactics. 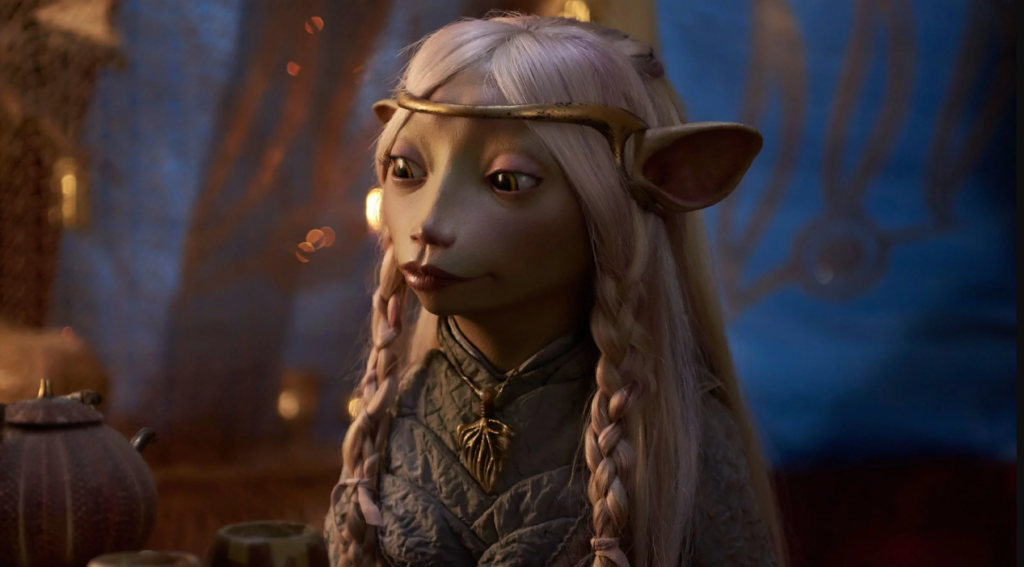 Brea, a Gelfling princess, from The Dark Crystal: Age of Resistance Netflix series.

Let me start off by stating that I have yet to see The Dark Crystal: Age of Resistance on Netflix. I grew up watching The Dark Crystal, enamored with its colorful characters, and was so excited to hear the news of a new series about the topic. However, at the time of its release, I was transferring to a new job, and got swept up in the chaos of life. For this review, I am representing the other half of the population who was drawn into the allure of Tactics based on our love for the movie and Jim Henson’s world as a whole. I am looking at this game and reviewing it based on how it stands up on its own. With that out of the way, let’s jump into it. 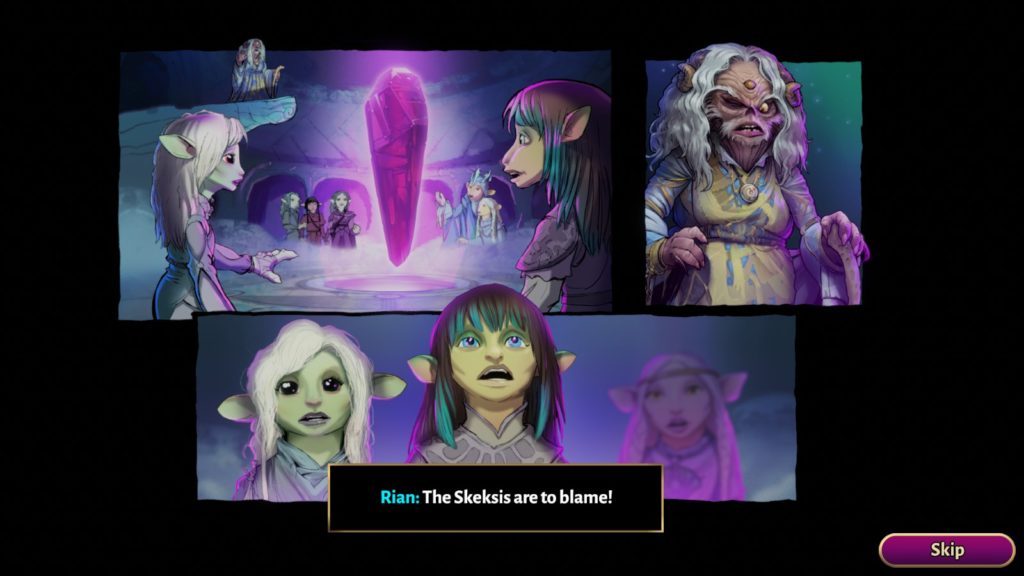 The Gelflings dreamfast with Aughra.

As stated in the introduction, Tactics revolves around the story of the Gelflings and the nefarious Skeksis. This is a story and a premise we are used to. It’s like coming home, and places us in familiar territory, despite the initially unfamiliar characters. The player is introduced to Aughra, the mystic, and learns more about the narrative of our main protagonist Rian through a tutorial dreamfasting sequence that serves to introduce us to some of the basic mechanics of the game. The clans of the Gelflings seem to refuse to work together, but you’ll have to make them see reason if you want to stand a chance against the Skeksis. 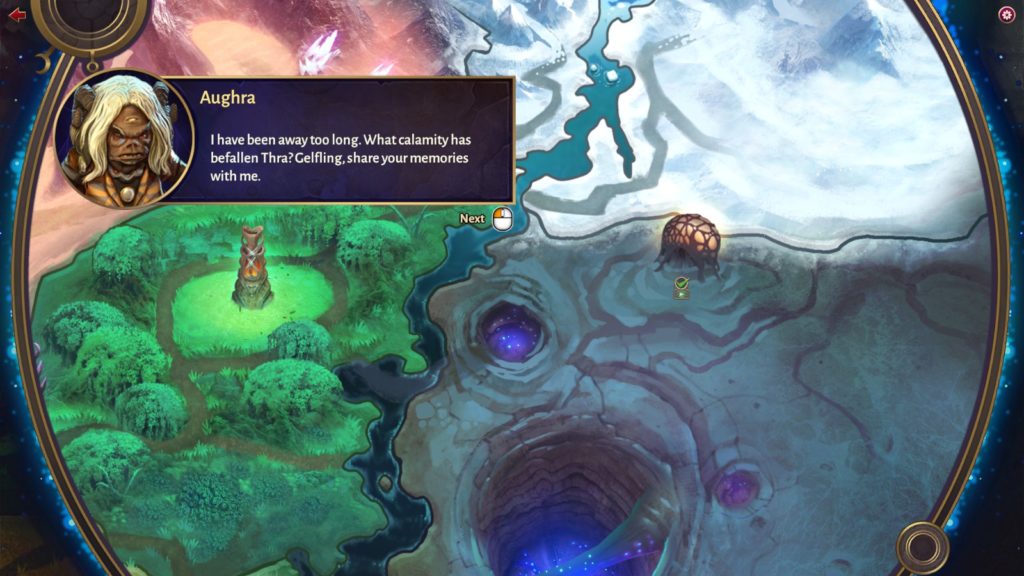 Aughra introduces the player to the world map.

Most cinematics in Tactics are told through comic-style panels by the incredibly talented Andy Cotnam (who has also worked on other BonusXP titles). This was by far one of my favorite parts of Tactics. The first initial panel that we are introduced to shows a Gelfling being sacrificed to the crystal in order to retain the youth of the Skeksis, and the illustrations that depicted it absolutely stopped my heart. 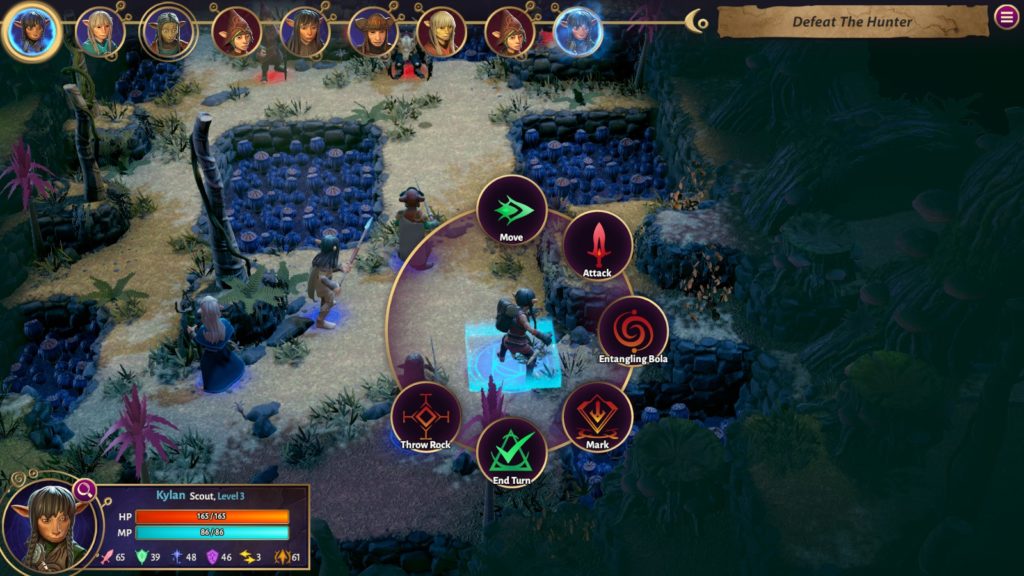 Clicking on the character brings up the movement/skill wheel.

Moving through the various stages of Tactics is pretty intuitive for those who have played turn-based RPGs before. You generally have two actions: your move, and a skill. An added bonus to the stages are vertical platforms. Female Gelflings can easily fly up onto these to gain an advantage on foes beneath you, whereas the males might be a bit slower. Each time you want to make a move or perform a skill, you have to click on the character to bring up the skill wheel. It’s also just a little bit bulky and feels kind of in the way. There’s a lot of clicking that has to be done to get your character where you feel they should be best situated. 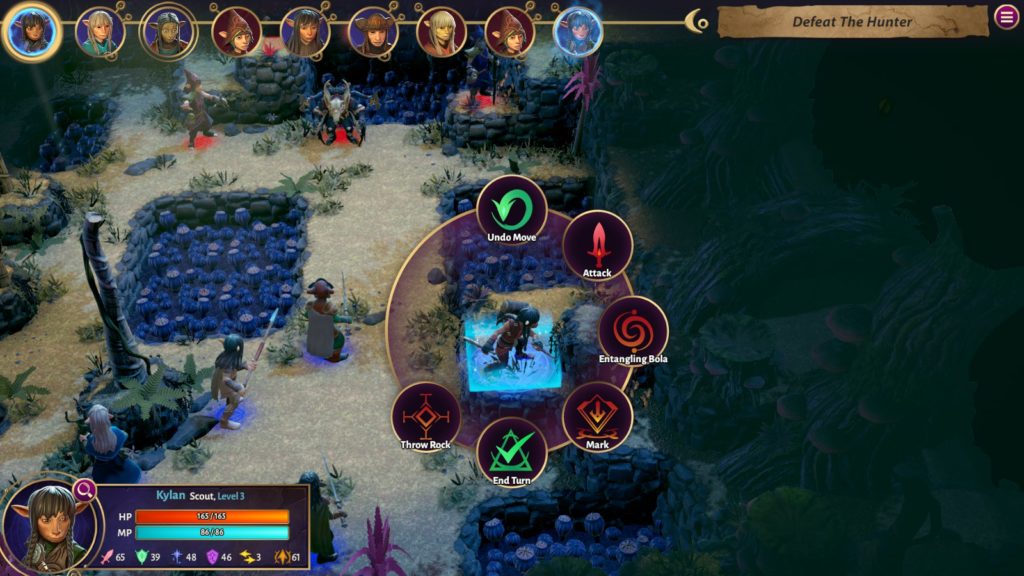 After moving, you can then press the ‘undo move’ button to reset your movement.

The ‘undo movement’ action is one that I haven’t quite seen before in a turn-based RPG, at least not recently. Divinity: Original Sin immediately comes to mind with its skill resource management system. That being said, I still like it. When you do attempt to move, a grid opens up beneath your selected character, showing you where they are eligible to move. After moving, you can undo that movement at absolutely no cost or penalty. 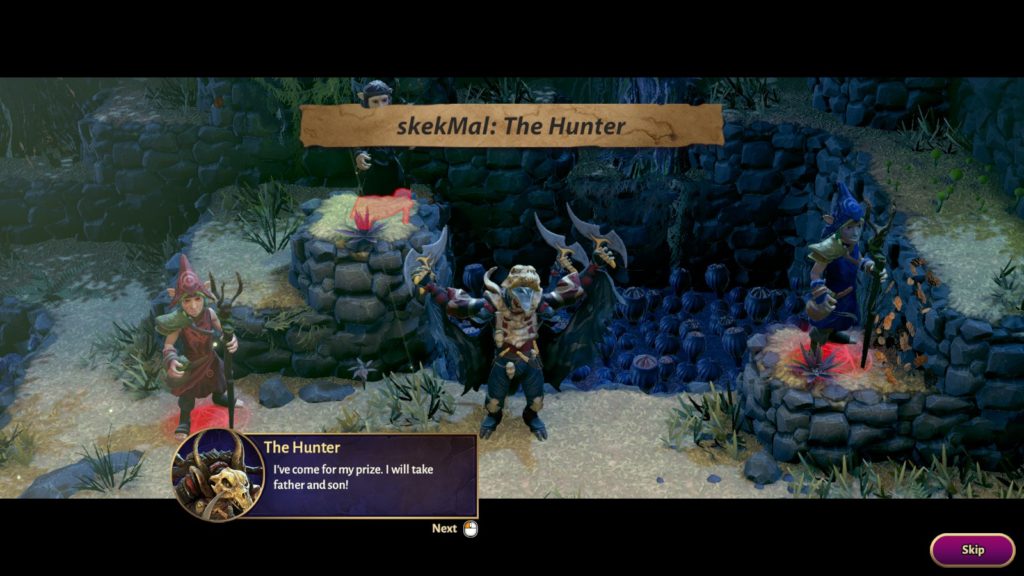 In the skekMal fight, you often have to place allies in harms-way to survive the onslaught.

Speaking of resource management, Tactics surprisingly trains you to treat your allies that you’ve recruited during battle as resources themselves. Each campaign stage that you battle through is just a little bit different and makes you think outside the box about how you should accomplish that task. Tactics doesn’t necessarily punish you for sacrificing characters for the sake of meeting objectives. In fact, I think in some ways it encourages it. 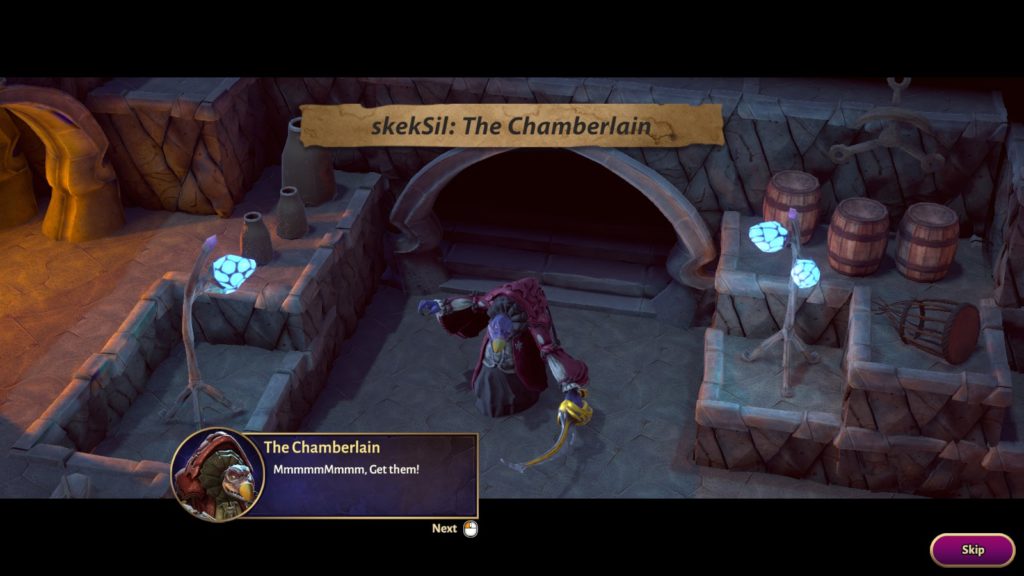 Two characters will not make it out of this scene.

I initially encountered this in the tutorial, and actually didn’t even read the objectives because I was so tired. With that in mind, I should have immediately run for the door with two of my characters, but instead, I tried to save all of my characters and failed. Upon looking at the objective again, I realized that this wasn’t just a regular fight. We were retreating, and sacrifices were going to have to be made in order to succeed. This choice was also reflected in the following comic cinematic, where we saw the outcome of Rian having to retreat from battle. 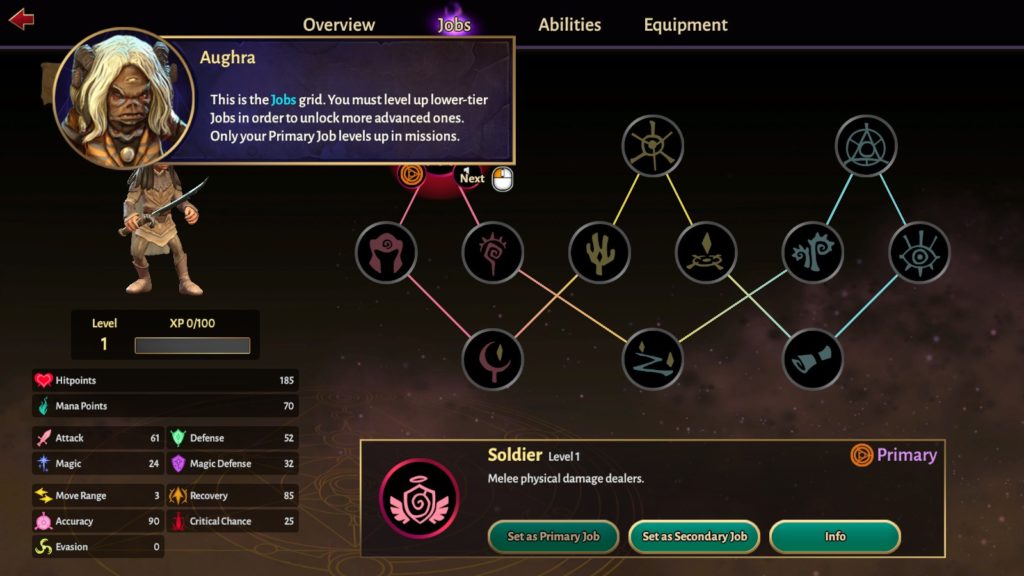 The characters in Tactics can be customized to further their combat prowess and unlock more abilities to help your team overcome obstacles. Characters have a Primary job and a Secondary job, each that lets you choose abilities and further develop how you want that particular character to function on the stage.

Primary jobs offer three abilities for your character initially, with more specializations to choose from as they level up. Secondary jobs are picked up at level five, and you get to add two more additional abilities to your combat options. These abilities aren’t set in stone, and can actually be swapped in between missions to let you customize your party to overcome a specific stage. Characters can also be outfitted in equipment and armor that you find throughout the campaign or purchase at the store for pearls. 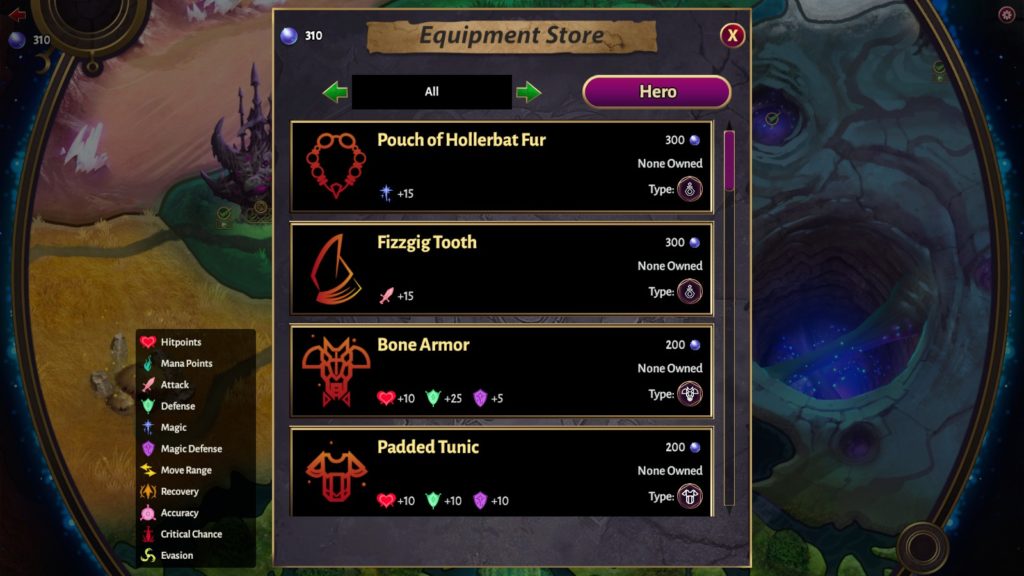 I’m a big fan of how Tactics implemented their job system, and I think it adds a necessary layer of customization that allows you to play the game how you want. Tactics, for the most part, is an extremely linear game and story. We all know that it is going to have a bittersweet end, if you have seen The Dark Crystal movie. Even without having seen the Netflix series, it’s pretty easy to pick up on that. So while you’re just along for the ride, it’s nice to be able to add a bit of flair and flavor to how your party fights. 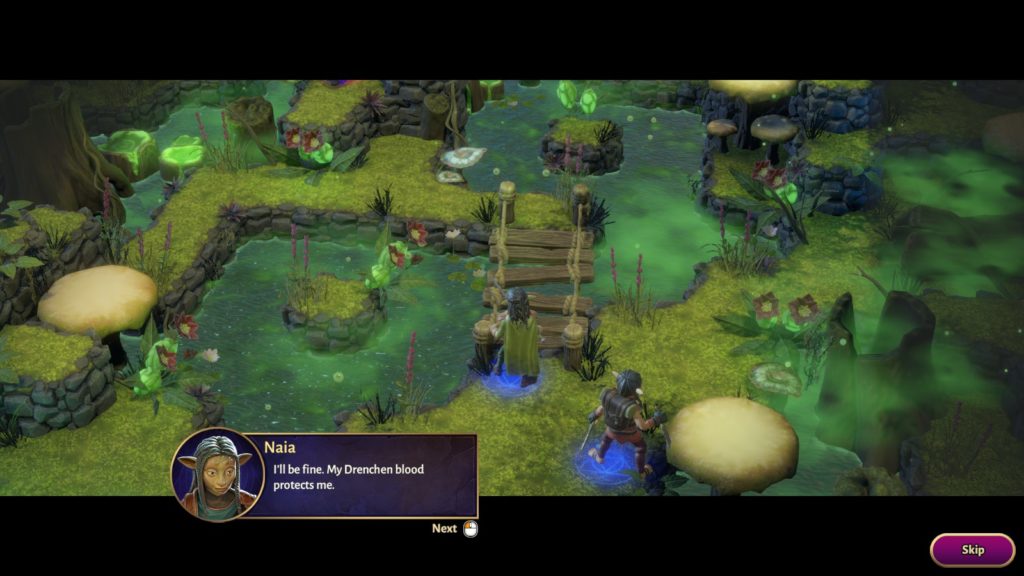 The beautiful swamp environment, where you have to use the water to your advantage in order to succeed.

Tactics is definitely stylized and looks like it has gone for a more traditional fantasy look rather than sticking to that of the puppets. I think it would have been a neat nod to the series to try to keep the more traditional look over what we received. It had to have been difficult to translate that kind of style to a 3D rendering, so I still give props to the developers for managing to retain the feel of the characters while putting their own twist on their appearance. The world of Thra is extremely vibrant, and the various levels you play on each are different enough to have their own unique look and feel.

Something that threw me off guard was the omission of any kind of voice acting in the game. With only the grunts of combat here and there, the missing voice-acting was glaringly obvious. The music of Tactics was there, ever-present in the background, but it never really seemed to match up with the scenes. At one point in the battle, there was smooth, flowing, atmospheric music that felt better suited to relaxing in town rather than fighting in dungeons. With no voice acting and the music not matching up with the scene, the experience often felt dull for me. In a TV series or movie, the voice acting and music carry a lot of the emotional weight for a scene. With that missing here, I just found myself not connecting as much as I should have to the encounters.

Note: Our copy of The Dark Crystal: Age of Resistance – Tactics was obtained for the purpose of review.

The Dark Crystal: Age of Resistance - Tactics, or Tactics as we’ll refer to it here for our sanity, is a turn-based strategy RPG from the developers over at BonusXP and published by the well-known En Masse (Tera). The story for Tactics dire...
0
Average User Rating
0 votes
Have Your Say!
Your Rating: 0
Submit
Write A Review
Genre:Adventure, RPG, Strategy, Turn-based
Developed By:BonusXP
Publisher:En Masse