There are a great number of games that claim to be a part of the Survival Horror genre, but how many among them can actually scare the player and provide that thrilling experience to keep them engaged for a while? Sadly, not many.

Developed by Abstract Digital and Dual Effect and published by PQube Limited, Tormented Souls is a classic Survival Horror that recently came to Steam and immediately piqued the interest of the fans of the genre. The game resembles such classics as Silent Hill and Resident Evil 2.

If you want to feel a bit of that late ‘90s-early 2000’s atmosphere and bask in nostalgic remembrance while also diving into an entirely new story, then the game will fit you well. Tormented Souls is one of the most atmospheric games of the genre that will make you wrack your brain over puzzles and plunge into the events that are happening to the protagonist.

The developers mention being inspired by the original Resident Evil and Alone in the Dark series, and seeking to modernize the fixed-perspective action-adventure experience with a fresh twist. Check out our review to find out how successful they were!


Our protagonist, Caroline Walker, receives a letter containing a picture of two twin girls. The heroine is tasked with investigating their mysterious disappearance at Winterlake. What truly happened there? What is the fate of the girls?

Strange events start happening to Caroline herself when she follows the provided address. She wakes up naked in a bathtub of a mansion-turned-hospital, hooked to some outdated medical equipment. The last thing the young woman remembers is arriving at the main hall of the mansion, followed by sharp pain and then… nothing. Now it is up to Caroline to figure out what happened and who is responsible for the horrors of Winterlake.

It goes without saying that Caroline will also have to fight for her life with every step she takes in the abandoned mansion as she tries to figure out the truth of what happened. The game tries very hard to convey the atmosphere of horror and does a great job of it.

Your journey will be accompanied by strange sounds in the hallways, monsters that manage to ambush you despite you feeling prepared for it, rooms forming an elaborate maze… If you turn the wrong way without a map or have simply forgotten which way you’ve come from, it spells doom for Caroline and an end to your investigation.

The storyline of the game depends on the actions taken by players. 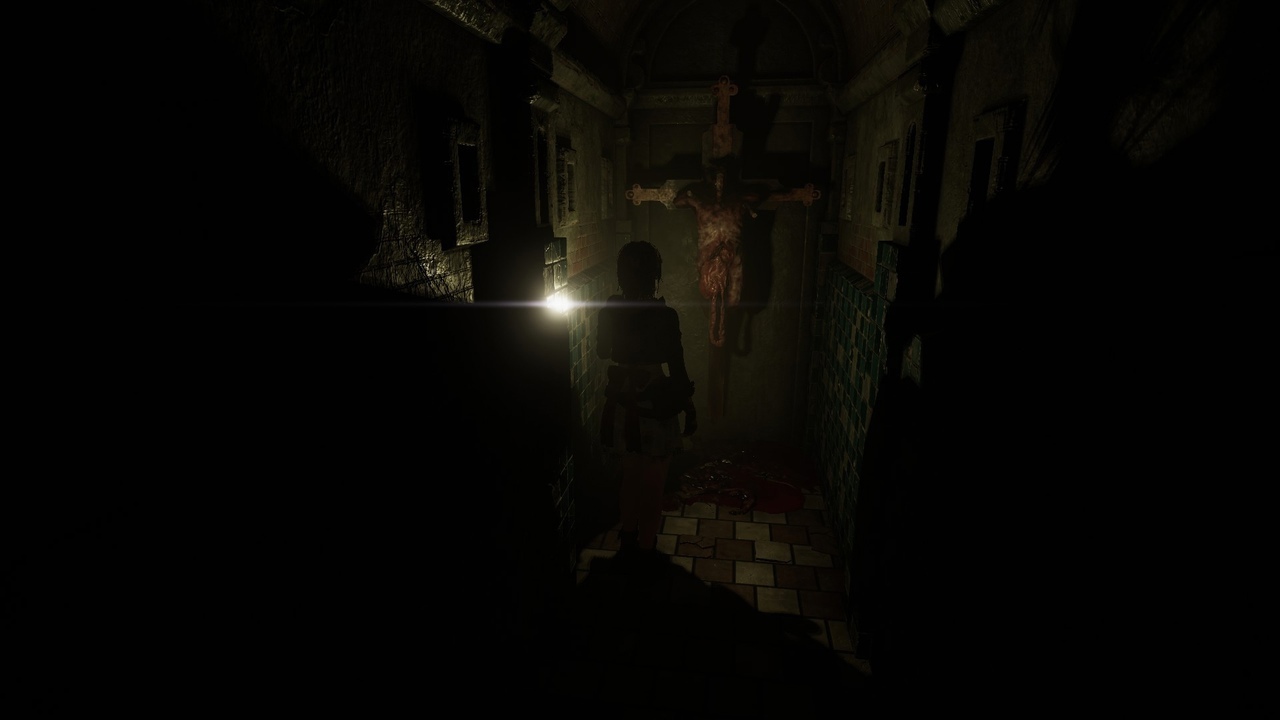 There are very few saves in the game so be prepared to replay a massive chunk if you died somewhere. While it might be annoying, I rather like that approach in the genre. It makes you appreciate your progress and opportunities provided by Tormented Souls.

The plot of the game is based on solving puzzles and various riddles. Some of the provided mysteries will have you wrack your brain – as you wander the mansion, you will be finding a number of objects and trying to remember where you saw a puzzle associated with a particular item.

The battle system is quite similar to old-school Silent Hill. The game features a fixed camera which can be quite a hindrance when you are trying to shoot something (and frequently missing). On the plus side, the game allows Caroline to jump backward which provides extra opportunities to hit a nasty monster making its way to the investigator.

A few times monsters seemed to completely ignore the damage done to them. Those moments were quite frustrating as, due to the infrequent saves, you really don’t want to die out of no fault of your own. I am not sure if it is some kind of damage resistance or a simple bug, however.

As you make your way through the abandoned mansion-turned-hospital, Caroline will be able to add several types of weaponry to her arsenal such as a homemade shotgun or a nail gun. The latter is my favorite, as it literally allows you to nail monsters down.

The soundtrack throughout the game is just magnificent. In the safe rooms or quiet places, the music is pleasant and soothing, allowing you to relax a bit from the constant process of avoiding death throughout the terrible mansion.

Overall, Tormented Souls is an extremely atmospheric game that will please the connoisseurs of the survival horror genre, especially if you don’t mind solving puzzles as the game plunges you into its events.

There are a great number of games that claim to be a part of the Survival Horror genre, but how many among them can actually scare the player and provide that thrilling experience to keep them engaged for a while? Sadly, not many. Develo...
0
Average User Rating
0 votes
Have Your Say!
Your Rating: 0
Submit
Write A Review