Bookbound Brigade brought the tales of some of your favorite literary and historical characters to PC on January 30th.   A light-hearted, indie platformer by a studio in Italy, Bookbound Brigade has a little something for everyone. But is it fun and is it worth the price? Books are about the journey, not the destination; so stay with us as we turn the page and jump right into our assessment. This is our Bookbound Brigade review for PC.

When I learned about Bookbound Brigade, I was super excited to dive right in. My literary heart fluttered when I saw that it combined some of my favorite characters with the Metroidvania genre. Ever the video game masochist and looking for the next challenge, I pulled out my Logitech USB controller and prepared myself for what was to come.

The Book of Books (B.O.B) holds all the stories of the characters and figures we know and love, but it has been Unbound! Well, that escalated quickly. It’s up to you and your team of unlikely literary heroes to retrieve all of the memory pages and restore balance to the Book of Books. 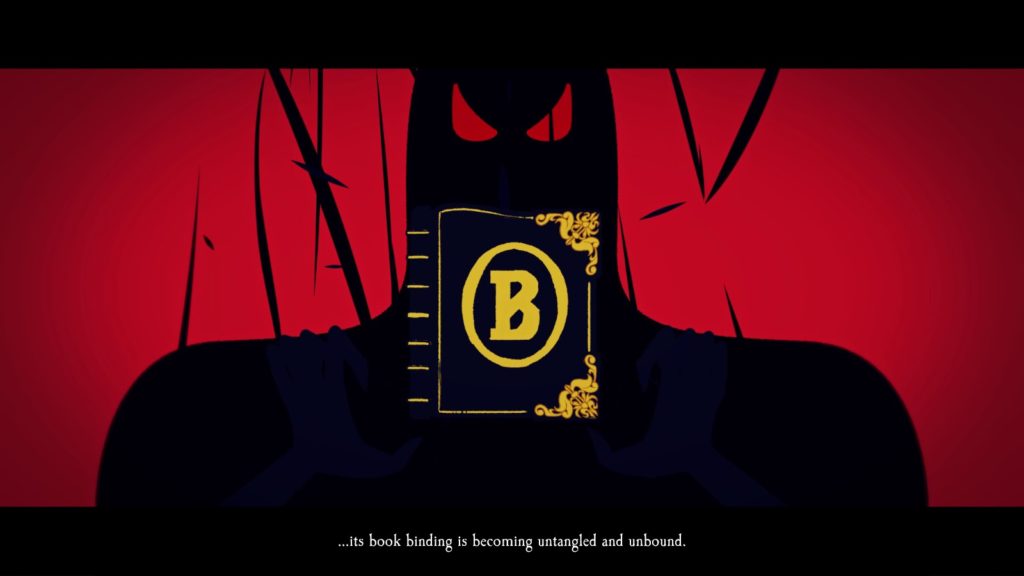 You begin the game with five characters: King Arthur, Count Dracula, Sun Wukong, Dorothy Gale, and Robin Hood. With Bob being Unbound though, the figures’ personalities start to unravel as well, emerging with dialogue and little quips that seem chaotic and uncharacteristic. As you progress through the world you can unlock more characters which will open up new powers that help you conquer new obstacles and puzzles. 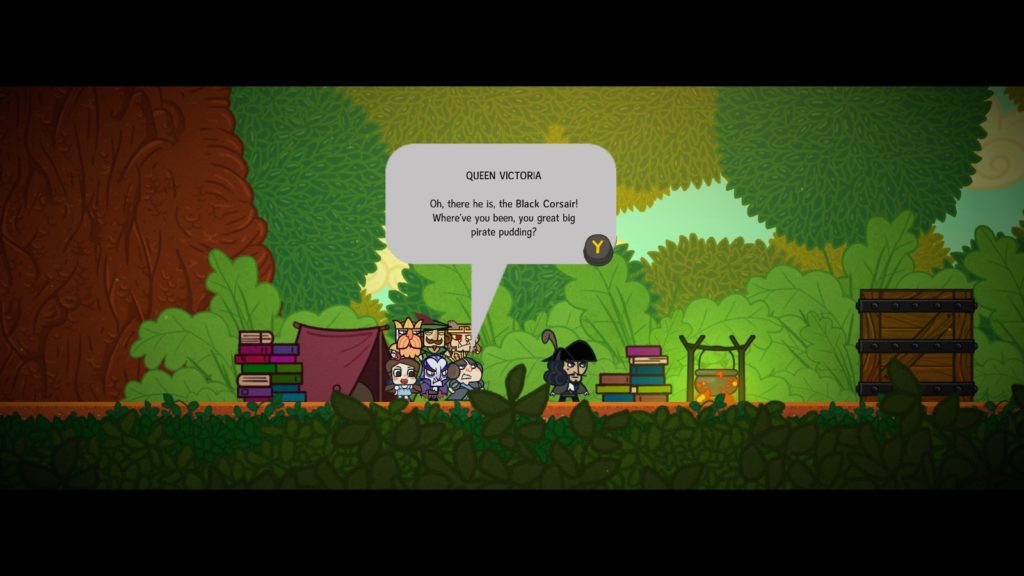 As expected of Metroidvania games, there are lots of challenges that you won’t be able to conquer right away. You’ll find yourself coming back to previous stages once you unlock new powers that will allow you to bypass blockades to find more loot.

An interesting mechanic of Bookbound Brigade is the ability to “stack” your heroes in various positions. Bookbound Brigade is a 2D platformer, and as such requires you to navigate some pretty difficult hurdles and stages with a little bit of creative thinking. There are many instances in the game that require you to quickly swap stacking positions in order to reach farther platforms or avoid special attacks. This proved extremely difficult on my Logitech controller and was especially tricky when I only had seconds to do so. I swapped to keyboard and mouse for a while to see if it was any better, but eventually moved back to my controller as it just felt more comfortable. 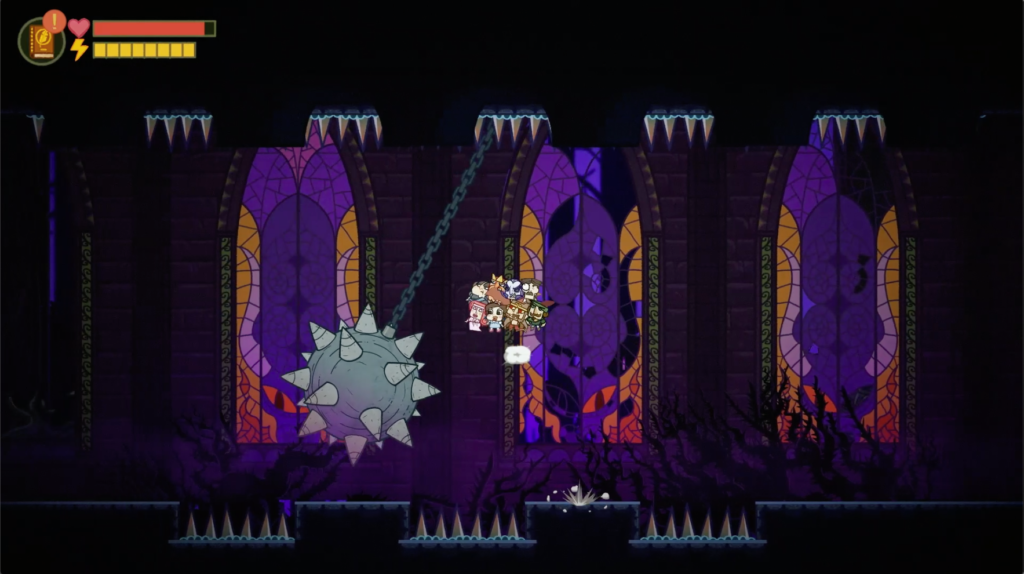 Some of the hitboxes for spikes in the game seem just a little bit off as well. There were many times during my playthrough where I could have sworn that I timed a jump just perfectly, but still experienced an instadeath due to spikes that extended farther than I could see. This also contributed to my death at the hands of moving columns of fire many times. Totally not a user error. Not at all. 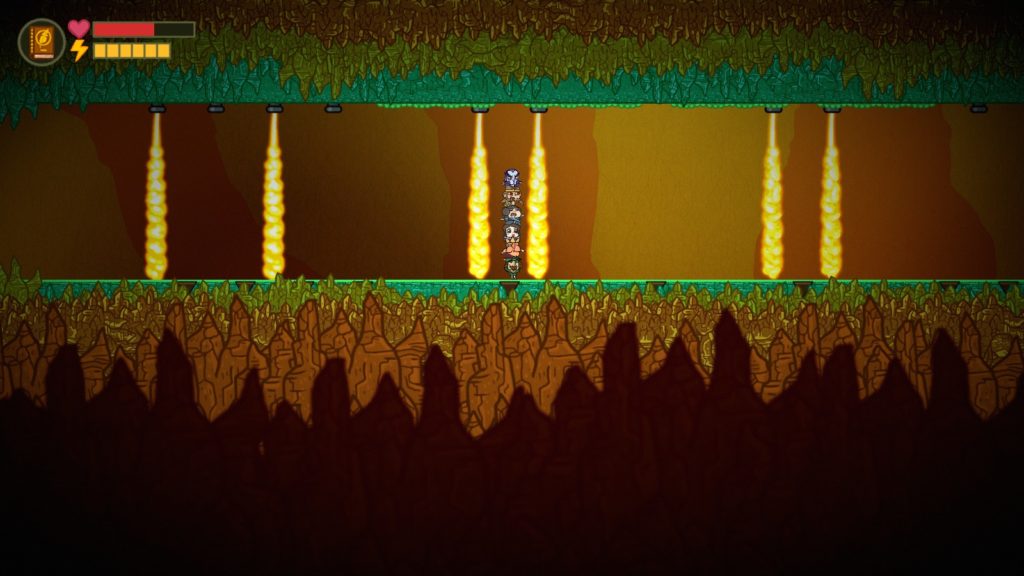 The dialogue that you encounter between characters is entertaining, but maybe just a bit too much at times. The dialogue sequences seem like they might be trying just a little too hard to be funny or like they’re beating a dead horse, but there are many interactions that are clever as well and got a chuckle out of me. Poor Joan of Arc, forever getting flamed by King Arthur. Roasted. 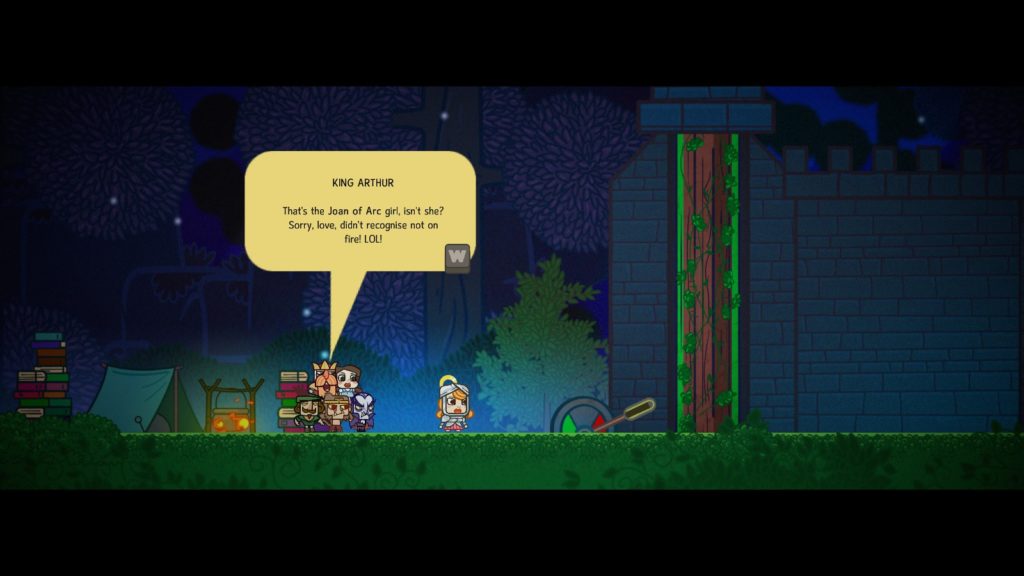 The world of Bookbound Brigade is actually pretty massive, and there are portals that you can unlock throughout the maps that allow you to travel back to the main hub: the library that holds Bob. I actually really, really love the artistic style of Bookbound Brigade. All of the characters and enemies have a sketchy hand-drawn look to them, and the world is very colorful and vibrant with a distinct foreground and background. This stark contrast allows for a little more secret hiding. If you can’t see the bottom of a map, there’s probably two possibilities: secrets, or instant death. If you’ve already reached a Totem Book nearby, take the leap! You’ll respawn back at the book and possibly have a few memory pages to take back with you. 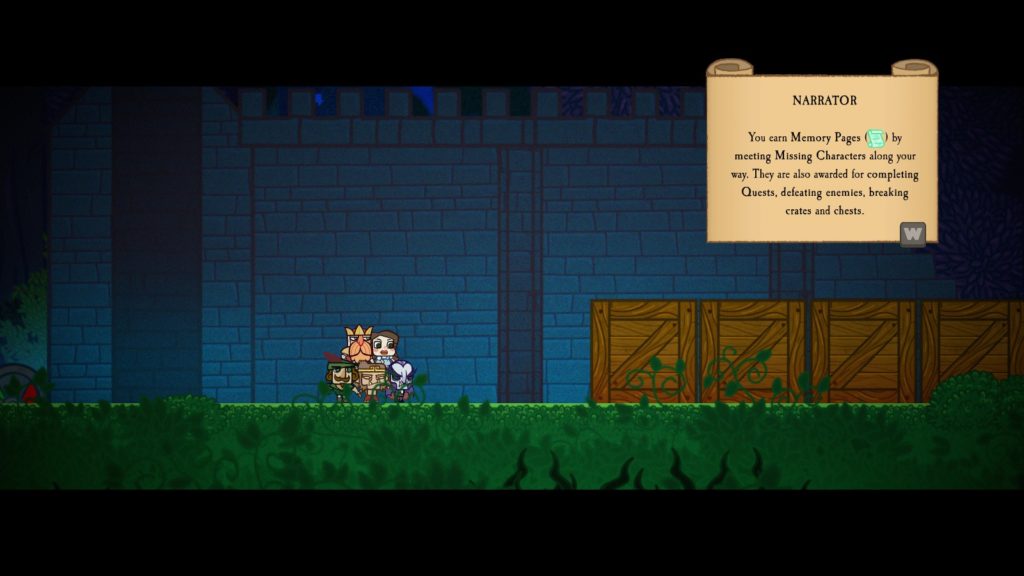 Respawning is fairly gentle. You do have lives and hearts, but there is ultimately no real game over if you keep eating dirt. You’ll just teleport back to the beginning of the puzzle or nearest totem. Though, admittedly, this can get pretty frustrating if it’s a particularly long or difficult puzzle and you don’t have any legitimate Mario skills. 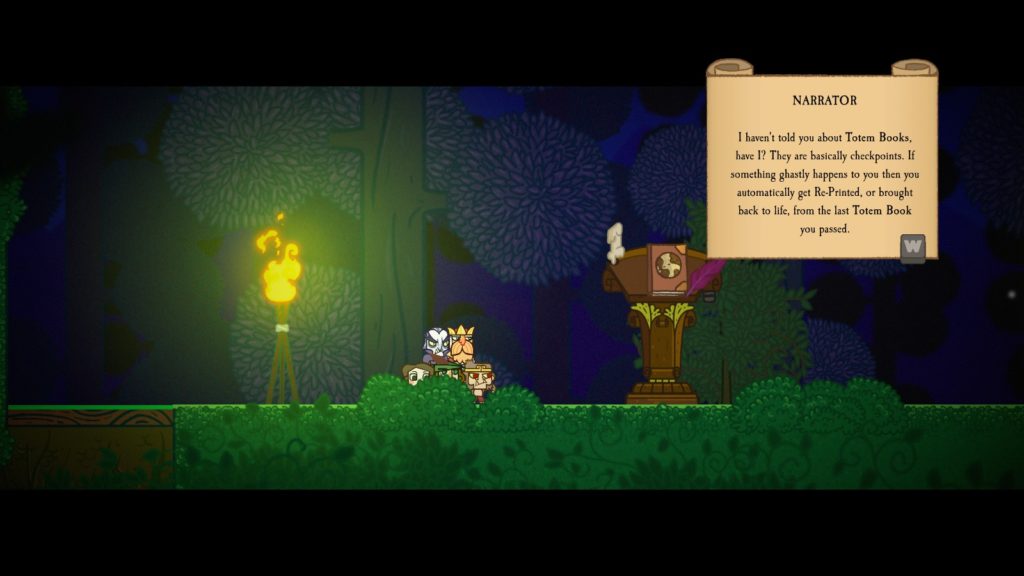 The narrator’s voice is a pretty nice touch throughout the tutorial and introductions. I tried to look up the voice for the actor but haven’t been able to find anything so far. A lot of people don’t like narration, but I thought he was spot on! It’s always nice to have someone who actually sounds interested and passionate in the lines they’re delivering talk you through the game. It just makes the experience that much more enjoyable.

Final thoughts about combat: it is kind of bare-bones until you really unlock more character abilities. You’ll be hitting the same key over and over again until you can swap positions to toggle your characters or use more interesting abilities. After you’ve experienced several stages you also start to notice some of the same little minions more frequently as well. Where the diversity in the map comes into play is in the level design and the end boss which provides a nice fight to wrap up the map. 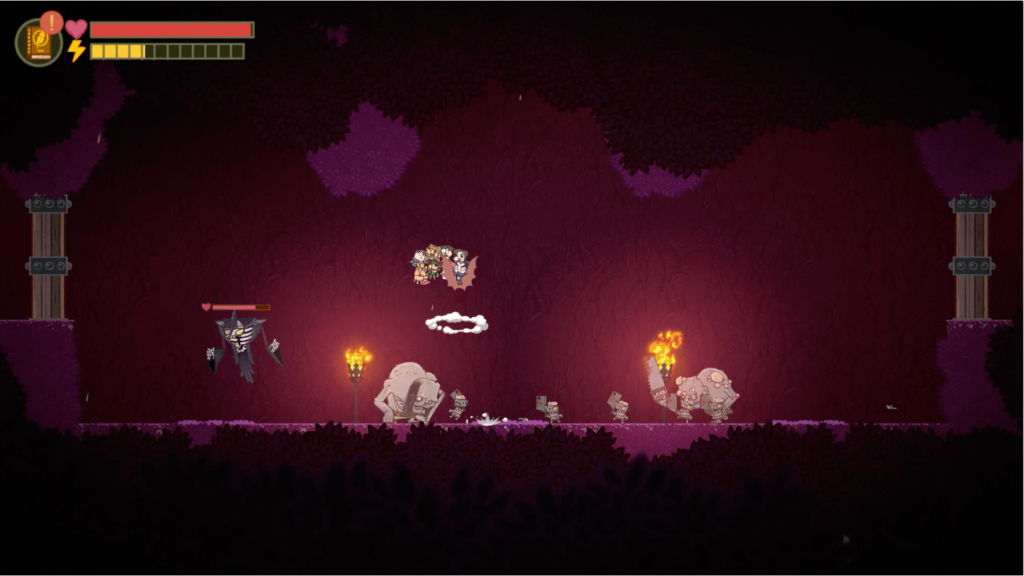 Tags: adventure, bookbound brigade, indie, metroidvania, platformer
Summary
All in all, Bookbound Brigade is a pretty fantastic and enjoyable platformer. Don’t let its colorful exterior fool you, this little game has enough challenge to hang with other big boy Metroidvania titles. If you’re new to platformers, you might find it a bit too difficult, but finally beating that stage or figuring out how to cross a particularly difficult platform feels so satisfying when you succeed. For the quality and how much content you get, I would absolutely recommend picking Bookbound Brigade up on Steam for $19.99 USD.
Good
Bad
7.5
Good 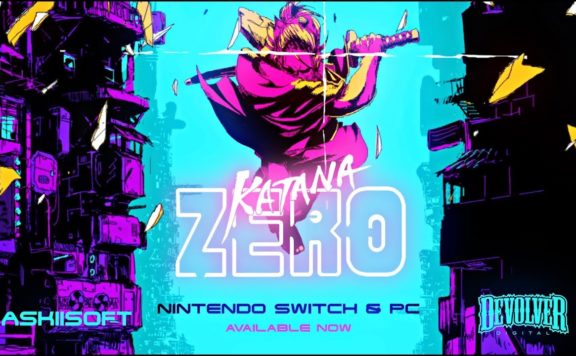 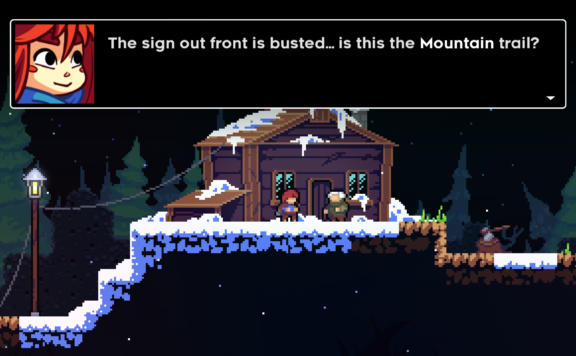 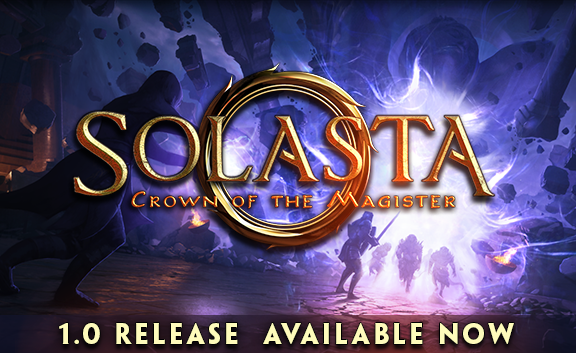 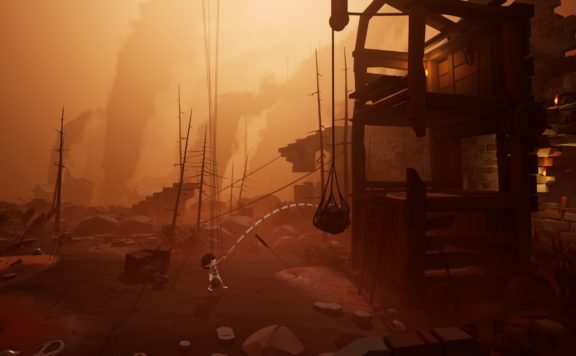 Bookbound Brigade brought the tales of some of your favorite literary and historical characters to PC on January 30th.   A light-hearted, indie platformer by a studio in Italy, Bookbound Brigade has a little something for everyone. But is i...
0
Average User Rating
0 votes
Have Your Say!
Your Rating: 0
Submit
Write A Review
Genre:Adventure, Indie, metroidvania, PC, Platformer
Developed By:Digital Tales USA LLC
Publisher:Intragames Co., Ltd