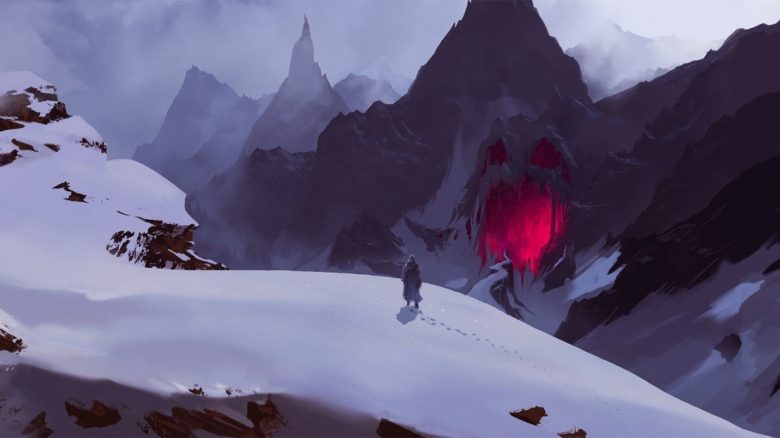 It should be no surprise to fans of the Rogue-like genre that, if you decide to play one of these games, you will die.  In fact, you will die, like, a lot.  That’s part of the charm, but so is complexity, sandbox gameplay, world exploration, and a call-back to the golden age of gaming.  Having cut my teeth on Sword of Fargoal, Temple of Asphai, Gemstone Warrior, and other classic dungeon-delving games, I’ve always had a soft spot in my heart for difficult dungeon romps.  I mean, I’ve never been good at them, but they bring back good memories.  Although by default a ‘tiles’ (e.g., pretty graphics) game, with an option for classic ASCII text, it does tick the nostalgia box. Ultimate ADOM – Caverns of Chaos attempts to bridge classic Rogue gameplay with something less hardcore than its original incarnation.  Does it succeed? Keep reading our review!

And the tiles are very pretty.  Sprites generally have an almost chibi vibe to them, which – although not my preference – are still nice and unexpectedly detailed.  For example, when I had my necromancer graft a gnoll’s arm to his back, a third arm actually appeared on his sprite.  Similarly, the music is surprisingly good, and it does the epic-dungeon-exploration theme justice.  Kudos to the devs for keeping the thematic elements up to snuff. 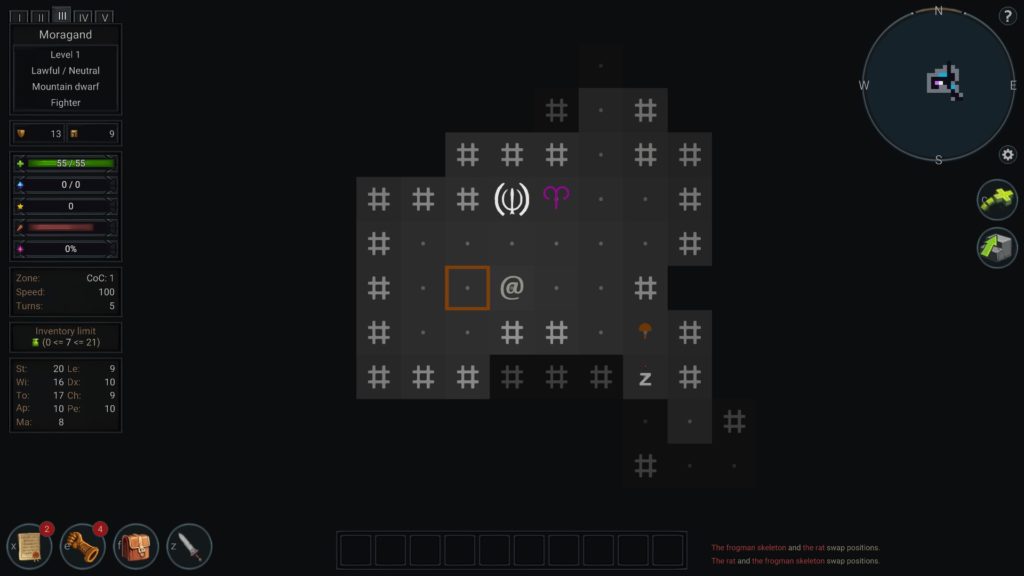 On the other hand, eye candy isn’t always what matters.  Gameplay and world-building are critical in a rogue-like, and it can make or break the experience.  I think Team ADOM did fairly well on the mechanics front.  That is, there are enough mechanics to enjoy learning about, but not so many or so complex that something as simple as to-hit or damage numbers is hard to understand.  Moreover, a variety of skills exist across numerous categories, but they tend to modify the limited number of characteristics that are available.

Similarly, options for playstyles tend to be fairly simple.  Players will no doubt find the familiar “bump” fighter types, spell-casting mages, archers, rogues, healers, etc.  Each has its advantages, and some have higher survival rates than others.  Predictably, I found my fighter-types last much longer than my mages, but as my magic-users gained in power, they were much better able to handle large crowds quickly with AoE magic.  Summoning magic (e.g., necromancy, etc.) was less predictable, as my summons weren’t smart enough to hit the bad guys, but they did do well in distracting the enemy.  I also would have liked to see more movement abilities, nature-based abilities, etc., but we can’t have everything.

Despite the common, expected tropes, I did like the possibility of mixing and matching abilities, something I don’t expect to see in a Rogue-like.  One of my favorite characters so far has been a Chaos Knight (or ChAoS KnIgHt for the initiated) who was both mutating and turning undead (via necromancy skill points).  Similarly, paladin-like characters are easily buildable by selecting healing spells as a fighter, etc.  Although one’s proficiencies and skill point availabilities will be determined by one’s faction and class, more customization was possible than I thought would be. 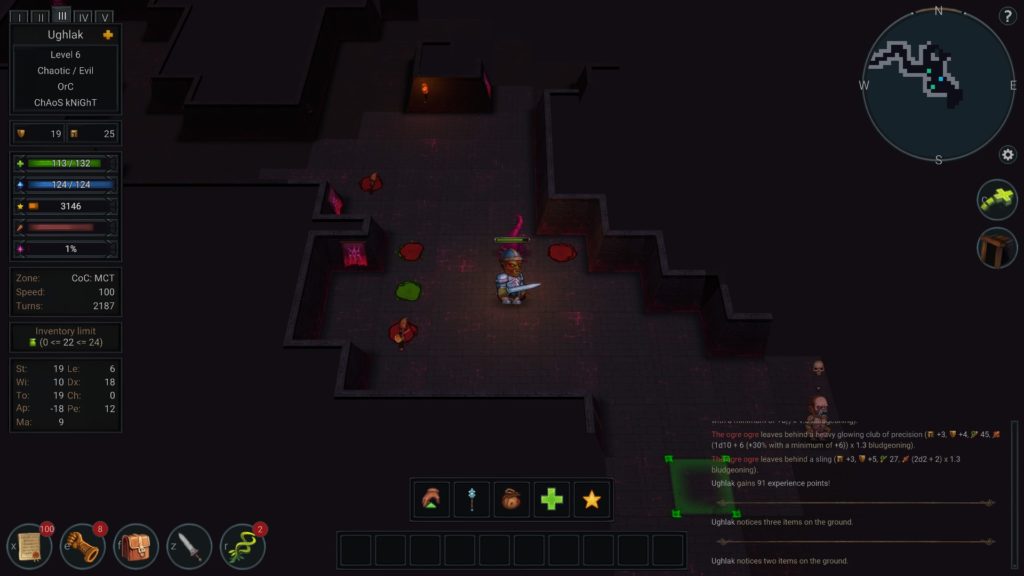 Artificial Intelligence was passable.  At times, the enemies were inexplicably stupid (of which the tutorial encourages the player to take advantage), and at other times, the enemy was doggedly smarter than I wanted it to be.  In concert with an array of traps, environmental hazards, randomly spawning enemies, etc., there does seem to be a fair (relatively speaking) balance between chances of death and confidence in moving forward.  I’m not sure if it’s to a rogue-like’s credit or not, but I didn’t feel like I was going to die at every step, which I’ve felt in other games.

Worldbuilding, however, is where Ultimate ADOM falls short of its predecessor.  Rather than the developed world, with towns, an overworld, and the expected dungeons, Ultimate ADOM is just one dungeon.  It’s a big dungeon, but it feels like a huge, missed opportunity.  Indeed, in many ways, Ultimate ADOM feels sorta like a simplified Dungeon Crawl: Stone Soup, even down to the sub-dungeons (e.g., the Kobold Fort) that Stone Soup features.

That said, I’m not a Rogue historian, and it has been, like, 20 years since I played the original ADOM, so I’m not sure which features came first.  Nevertheless, in this regard, Ultimate ADOM feels like a step back from the awesomeness that ADOM was.  The smallness of the world does feel somewhat eased by the number of factions vying for the McGuffins at the bottom of the big hole you’re exploring, but I hope the devs expand the world in the future. 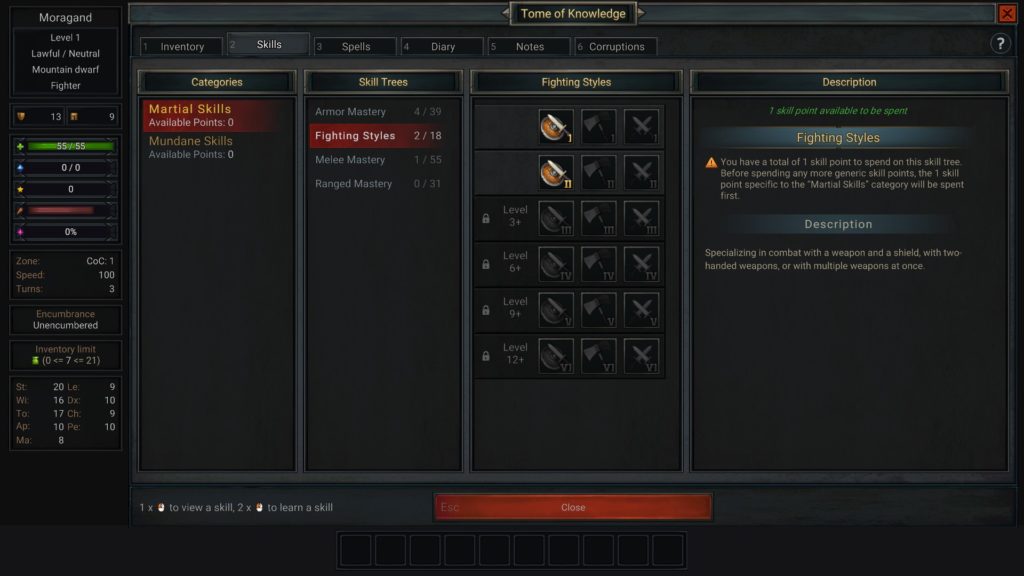 The last thing I wanted to mention was that Ultimate ADOM does not quite feel finished.  It needs some polish, considering that I’ve had a few odd crashes, graphical glitches, etc.  I’m not sure why, but I get the feeling that there was some pressure to push Ultimate ADOM into the “finished” category that ran counter to the observed reality.  Maybe it was an oversight.  Maybe it was a financial decision.  Either way, this bun needed to be in the oven a bit longer.  It’s not crippling, but it is noticeable.

Ultimate ADOM: Caverns of Chaos is a good game.  It could have been better, but that’s where we are.  If you’re a Rogue nut, it’s worth picking up.  Do not – I REPEAT – do not expect to play the classic ADOM with improvements when you play Caverns of Chaos.  This is a different game with some familiar thematic elements.  I would implore the devs to continue expansion and development, but I see myself continuing to play either way.  In sum, this is a good dungeon delver.  Like most roguelikes, it is not for the faint of heart, but its simplified nature likely opens it up to a wider audience than the original or similar roguelikes.

Tags: pc, review, steam, Ultimate ADOM – Caverns of Chaos
Summary
Ultimate ADOM – Caverns of Chaos attempts to bridge classic Rogue gameplay with something less hardcore than its original incarnation. Indeed, Ultimate ADOM departs from the broad, well-developed world in favor of a single dungeon. Although not a bad foray into dungeon delving, what with its variety of playstyles, factions, races, etc., other games have managed to use this formula in a more effective and/or polished manner.
Good
Bad
7.5
Good
Previous ArticleDEATHLOOP – Official Launch Trailer: Countdown to FreedomNext Article5 Things to Consider When Buying a House with a Games Room 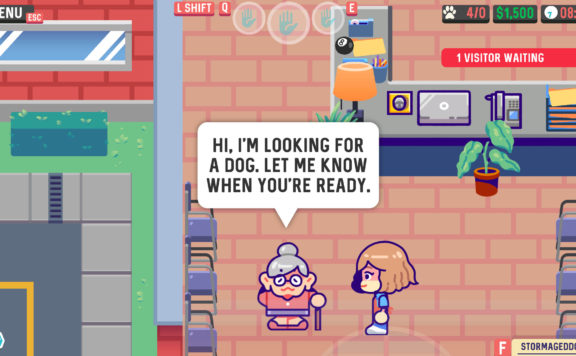