When it comes to the world of bluetooth speakers, the market has tipped past saturation into a full soak. With so many options to choose from, it can be hard to separate out the worthwhile from the worthless. Today, we’re looking at the Ultimate Ears MEGABLAST. It’s big, Alexa-enabled, and just about as life-proof as they come, but with an MSRP of $249, is it the buy-in? This is our Ultimate Ears MEGABLAST review. 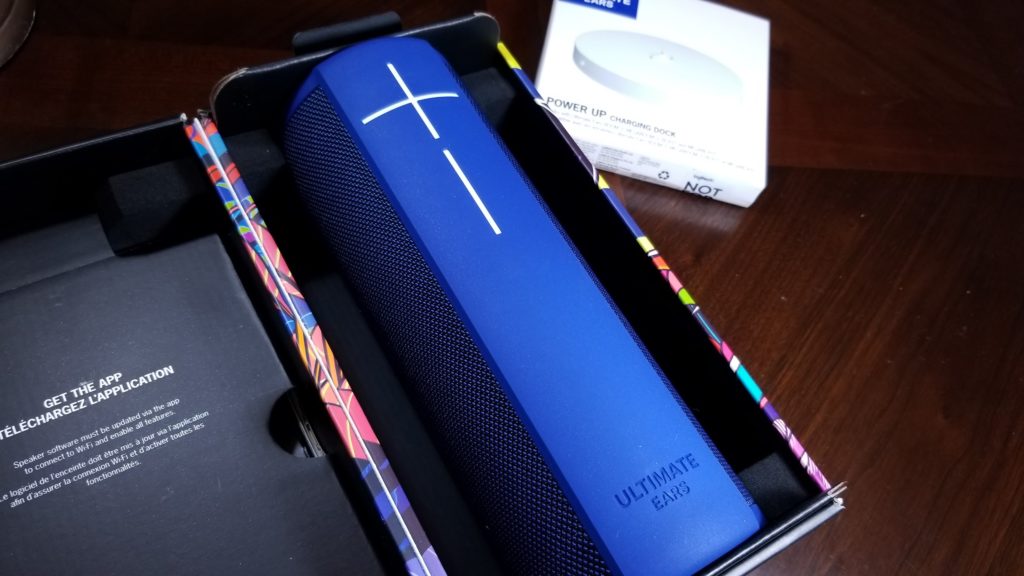 Make no mistake, $249 for a bluetooth speaker is a lot of money. Whenever we review items items in that price bracket, we’re looking to see what makes it special, what exactly justifies the extra cost against the competition. In the case of the Ultimate Ears MEGABLAST, it turns out a lot.

One of the first things that struck me about the MEGABLAST was how well packaged and presented it was. It’s clear that Ultimate Ears wants the user to feel like they’ve bought something premium. As you can tell from the picture, once you remove the outer sleeve, the book-styled box is artistic enough to be put on a shelf as its own decoration. Inside the box, the speaker is held firm inside of its foam cutout, safe for travel.  Also included in the box is a charging cable and some documentation.

The MEGABLAST is an imposing speaker. Coming in at 9.3 inches high with a 3.5 inch diameter, it’s one big beat blaster. This makes it a bit harder to take on the go, say, clipped to a carabiner but is easy enough to throw into a bag or move room to room around the house. It’s definitely made to travel, too. 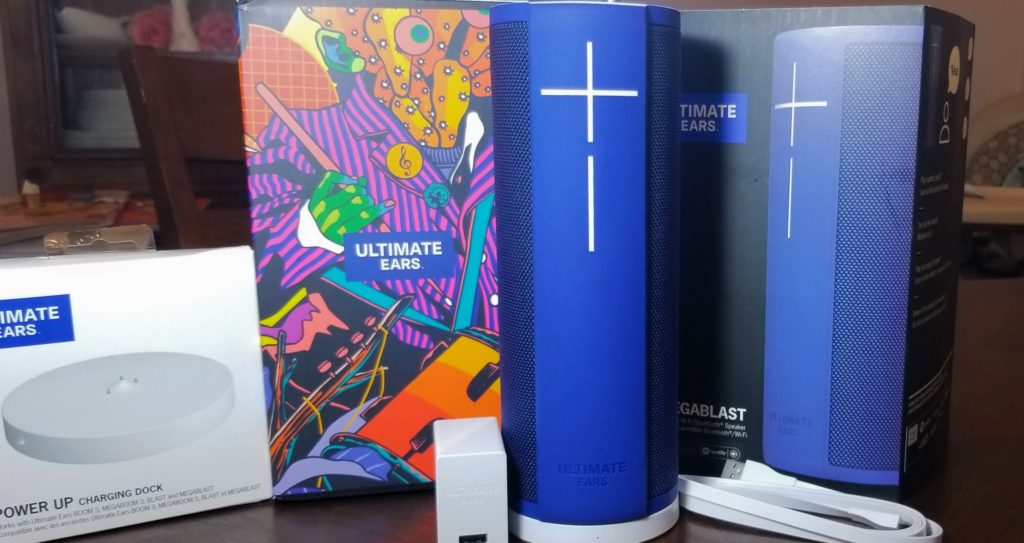 Simply put, the MEGABLAST is one of the best constructed speakers I’ve come across. It’s made to travel with you anywhere; through the mud, rain, snow, or even a tipped canoe. It’s IP67 rated waterproof and dustproof and can even be submerged for up to half an hour in water up to a meter deep. It’s a bit nerve wracking to run such an expensive bit of tech underwater but it comes through just fine, no worse for the wear. It’s also rugged enough to take a few drops because, let’s face it, if you’re taking it on an outdoor adventure, it’s going to take a few drops.

What really impressed me was the level of room-filling sound this combo-speaker was able to produce. The MEGABLAST delivers 360-degrees of sound through dual 25mm tweeters, 55mm active drivers, and 85x50mm passive radiators positioned in an array around the cylinder. No matter what direction you’re sitting, a driver will broadcast in your direction. The MEGABLAST can deliver wide bass beyond its size. At higher levels, it can become a touch unwieldy but I rarely found a need to push those levels of volume. The mids and highs are also present, allowing vocals to shine and instruments to ring true. I do wish there was an equalizer to tighten it more to my personal taste. 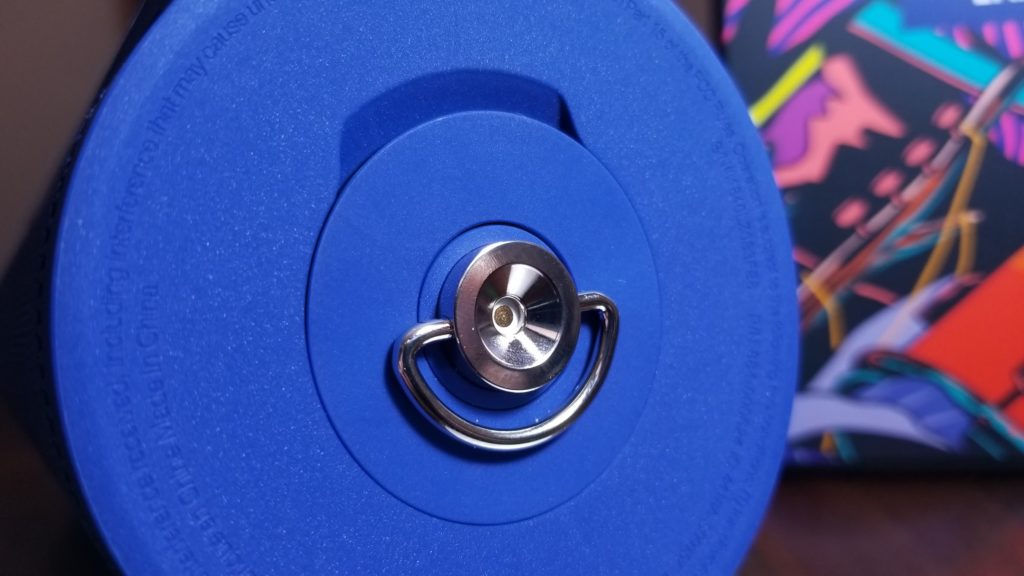 UE quotes a battery life of about 16 hours. In my listening, I averaged about 13 hours. The company also included the optional charging dock with our unit, which I would recommend. Not only is it convenient to constantly have it charged when at home but it also means you won’t have to lay the speaker on its side to connect the micro-USB cable.

The MEGABLAST also comes loaded with Amazon Alexa. In truth, it was the first smart speaker we’ve had in our home and adding a voice assistant to our life has been easier and more fun that we expected. My kids love asking Alexa questions (though we’ve had to turn it off for exactly that reason) and having hands-free access has proven remarkably useful particularly in the kitchen. It’s convenient to check the weather, look up a recipe, change songs, or any number of things. For the first time, has me considering Amazon Music Unlimited to get around the occasional unavailable song I’m looking for. You are more limited than Amazon’s other devices but if you’re not already native to them, like me, there’s nothing to miss and a world of new features to explore.

Interestingly, despite being equipped with a microphone and bluetooth, the MEGABLAST can’t be used as a speakerphone. I’m not quite sure what to make of that one but it’s disappointing since it seems like such a natural fit.

At $249, the MEGABLAST is an expensive speaker but one that packs a ton of utility and durability. There’s no other speaker I own would dare take it on a morning raft ride and then plan on it for a party later that evening. The sheer amount of sound this 9-inch tube is able to produce is impressive and the smart features only enhance the package. It’s a luxury item, to be sure, but an investment into a speaker that should last well into the future, adventuring at your side.

When it comes to the world of bluetooth speakers, the market has tipped past saturation into a full soak. With so many options to choose from, it can be hard to separate out the worthwhile from the worthless. Today, we’re looking at the Ult...
0
Average User Rating
0 votes
Have Your Say!
Your Rating: 0
Submit
Write A Review