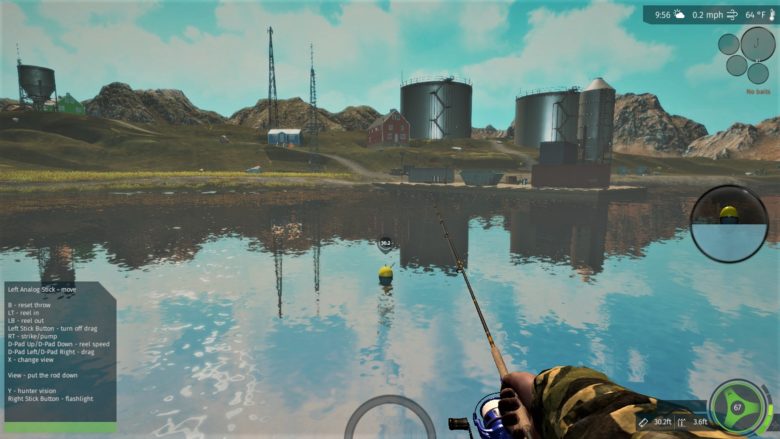 The Joy Of The Outdoors

UFS packs in a ton of locales to test your fishing prowess. You can cast from the shore of a small lake, put on your hip waders and fly fish in a quiet stream, hit the swamps in a boat, or head out on the ocean for the giants. You can even try your hand at ice fishing in a couple of spots. Every area is based on real fishing spots from around the globe, each one stocked with a variety of fish species. The diversity of environments is welcomed but the actual scenery is rather bland. Compared to the PC version (which has beautiful graphics by the way) the Xbox One version is sparse on foliage, distant objects are lower res and have jagged edges, and the water itself feels lifeless. Considering how the visual component of a fishing game is just as important as the fishing itself, the lack of detail in this version is disappointing.

Xbox One (right) vs. PC (left) graphics. Which one would you want on your wall?

As an added bonus, the Xbox One version does include three of the aforementioned DLC packs – Moraine Lake (regular or ice fishing) in Canada, the Kariba Dam between the borders of Zambia and Zimbabwe in Africa, and trolling for sharks in the waters near Greenland. These areas still aren’t quite up to par with their PC counterparts but their unique settings are an improvement over the other fishing spots in the console port.

Right along with a variety of locales, UFS lets you try out all different types of fishing disciplines. Like most fans of the sport, you will start off with a spinning or casting rod in your pursuit of freshwater fish. If you aren’t happy with just one line you can set up multiple rigs and put them on a stand to better your odds of landing a fish. After a while, you can try your hand at fly fishing and even fishing off the back of a boat in the ocean.

Using the right tackle and bait goes a long way when hunting for the big catch. Fortunately, UFS takes a lot of the guesswork out of setting up your rig. The encyclopedia gives a quick rundown of each species including the best time to find the fish active and what techniques to use. You are able to purchase a wide range of fresh bait and lures to fill your tackle box. Each item lists the fish attracted to it ensuring you are always fishing with the right bait.

As far as your rod and reel go you start out with the equivalent of the Wal-Mart special. Rods and reels run the full gamut with spinning, casting, feeder, and fly fishing options to choose from. As you progress in level more advanced options open up and you will want to replace this beginner gear with better, more durable equipment. Upgrading the rest of your gear follows the same pattern. At higher levels you can get better quality lines, more floats are available, larger hooks and lures can be purchased, and so on. 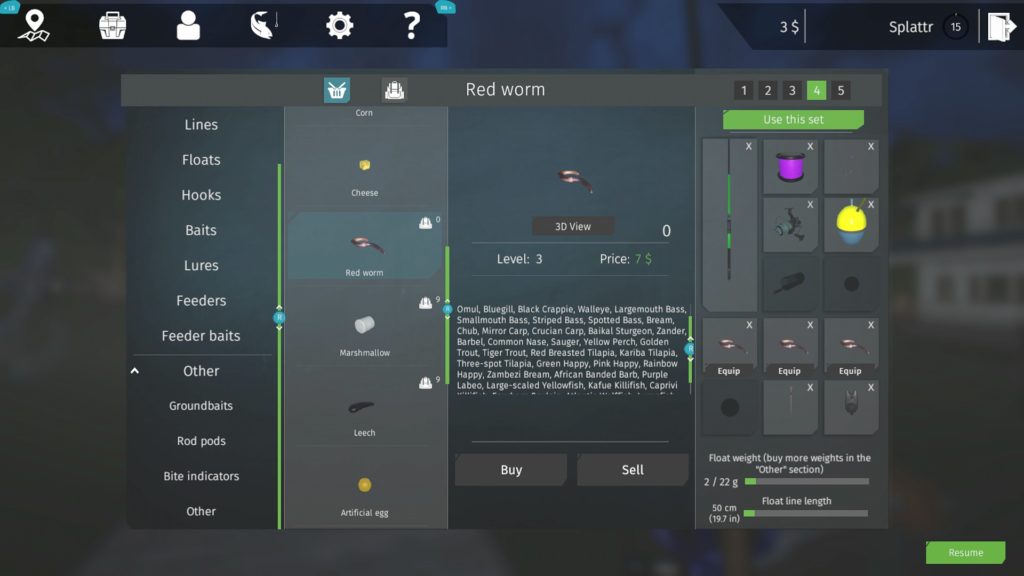 Picking your gear – red worms are always a good choice

Unfortunately, only a couple of choices really matter when it comes to bringing in the bigger fish. Sure, you have to have the right bait to attract a fish but, beyond that, it really is as simple as casting in the right spot. The only other requirements are having a lure or hook of the correct size and enough line to tire the fish out. Successfully using different techniques like stop and go or twitching to attract fish seem to be of little importance since straight reel, and especially float fishing, will catch almost anything you are hunting for.

The durability and strength of higher-level equipment seem to have little effect as well. Identifying when a fish has taken the hook is extremely basic. The controller will vibrate when a fish nibbles and waiting a second before setting the hook is all that you need to do. Lightweight gear can pull in a big fish and, due to the simplicity of the strike mechanics, you can equip heavier gear and still catch smaller fish that would realistically require more “feel” than the heavy rods would register.

The lack of realism continues once you have a fish on the hook. What should be a unique battle based on the size and type of fish really is just a matter of waiting it out. Once a fish takes your hook it will make a beeline away from you at a constant pace. The fish will run until it is out of energy, which seems to be based solely on weight and nothing else. Your sole task during this is ensuring your line doesn’t break by adjusting the drag on your reel and giving a slight tug every now and then. Assuming you have enough line (higher level reels hold more line) once the fish tires all you need to do is reel it back in. Larger catches may get a second wind and make another run, but there aren’t any random spurts of energy to catch you off guard so as long as you don’t put too much drag on the line during the fight phase the fish is yours every time. 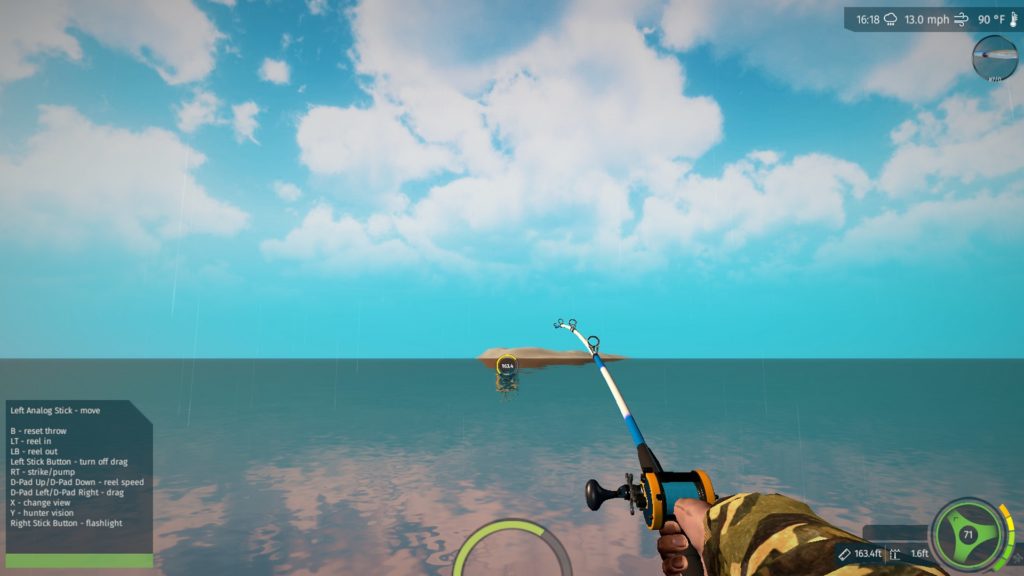 Going for the big fish with a “beautiful” ocean view

After about 10 of these “battles” UFS becomes very boring. Moving to a new map does little to alleviate the grindy feeling that sinks in. Pulling in a 12-ounce bluegill feels the same as landing a 30-pound trout or monster halibut. Fly fishing and fishing off of a boat ultimately end in the same drag and wait fight. It completely destroys any feeling of accomplishment when you pull in a large catch.

I was somewhat excited when I saw UFS also offered the chance to head out during winter and try ice fishing. Heading out in sub-zero temps and drilling a hole in the ice just to plop a line in the water doesn’t have any allure in real life so this was my chance to give it a try from my couch. At no other point during my playtime did I catch as many fish as I did ice fishing and sitting at Betty Lake catching trout after trout quickly became my goto location to grind experience and cash. Even though it was just as mind-numbing as every other fishing style, at least the fish were coming in fast and furious.

Reeling It All In

The first time I loaded up UFS on my Xbox One I had high hopes. There are a ton of locations to visit with ice and ocean fishing promising to give me experiences I haven’t had in real life. If the stunning views were actually stunning and landing a catch was more challenging than having enough patience (and line) to outlast the fish, Ultimate Fish Simulator might actually be ultimate. After a long day of fishing, heading to the lodge was a nice way to view my accomplishments, with all of my top catches displayed on the walls. It’s the one place where I actually felt like UFS was worth my time. I still have a lot of empty spots on the walls but I’m not sure I have enough in me to grind out the levels to reach the reels that can hold enough line to outlast the giant marlin of Pinas Bay. Even if I do decide to continue playing UFS I would switch to the PC version for the better graphics quality. 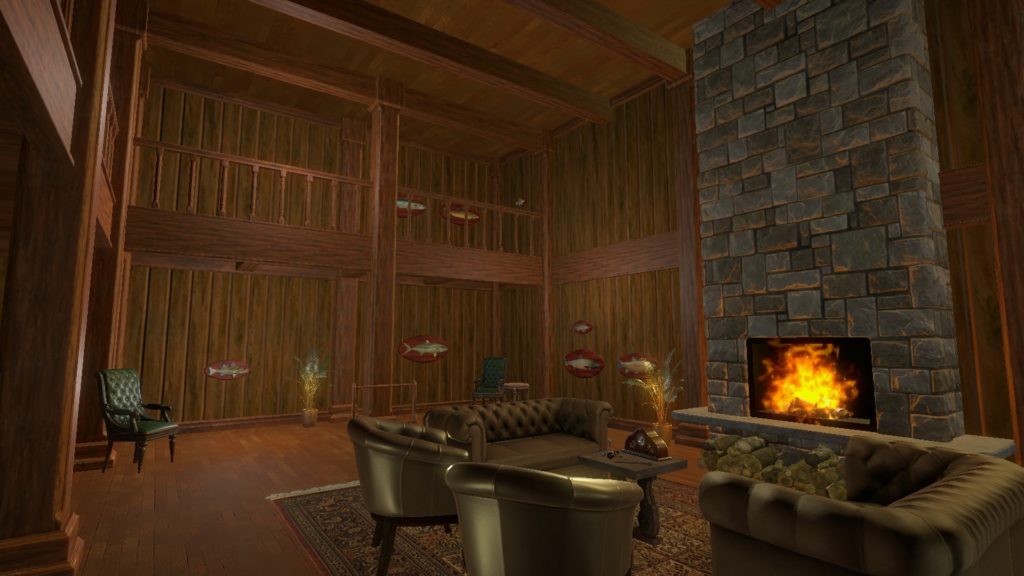 Back at the lodge

Tags: Bit Golem, Ultimate Fishing Simulator, xbox one
Summary
Ultimate Fishing Simulator for Xbox One is a sub-par port of the PC version. For a fishing game with the words ultimate and simulator in the title, UFS doesn't live up to the realism or challenge I envisioned. Even though the PC version has been out for two years the Xbox One graphics are of poorer quality, detracting from the overall enjoyment of the game. In the end, the inclusion of a wide variety of environments and styles of fishing doesn't offset the simplistic and redundant mechanics of catching and reeling in fish, resulting in a long and boring grind to reach the big catches the ocean fishing has to offer.
Good
Bad
6
Fair

Written by
Mitchell Gassner
Old enough to have played retro games when they were still cutting edge, Mitch has been a gamer since the 70s. As his game-fu fades (did he ever really have any?), it is replaced with ever-stronger, and stranger, opinions. If that isn't the perfect recipe for a game reviewer, what is?
Previous ArticleTencent Unveil Syn, A Cyberpunk FPS for PC and ConsoleNext ArticleTales of Monkey Island Returns to Steam & GoG 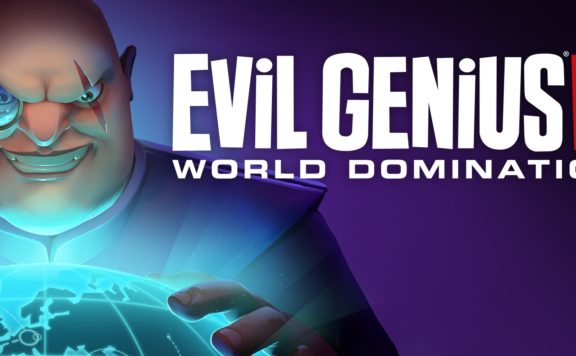