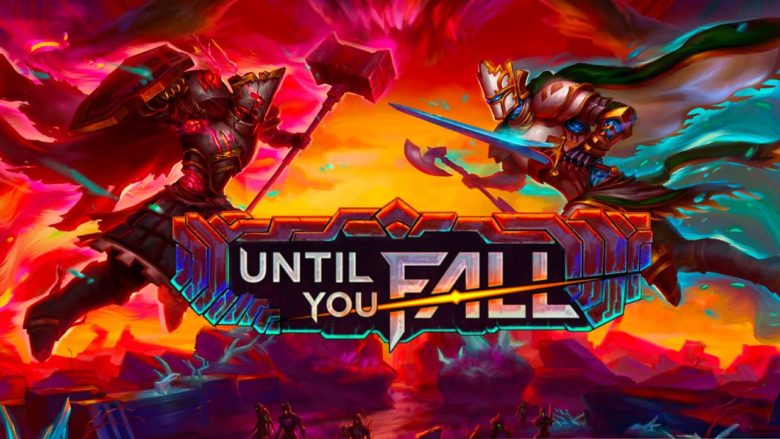 I originally played Until You Fall during early access on Stream. The game felt great at that time, and I must say it has only continued to improve after leaving early access in Oct 2020. Between the gameplay, graphics, environment, and soundtrack, this game does so many things right. Even if it still has a few issues. This is our Until You Fall review.

The game has you take on the role of the last Rune Knight, being helped by the Runesmith. Your goal is to fight your way towards the fallen city of Rokar to destroy whatever has caused the city’s destruction. It is a simple plot but compelling once you fight your way through to the first boss encounter. Being a VR game helps here. I found myself more invested in the story with each battle since VR immerses you so much in the world. 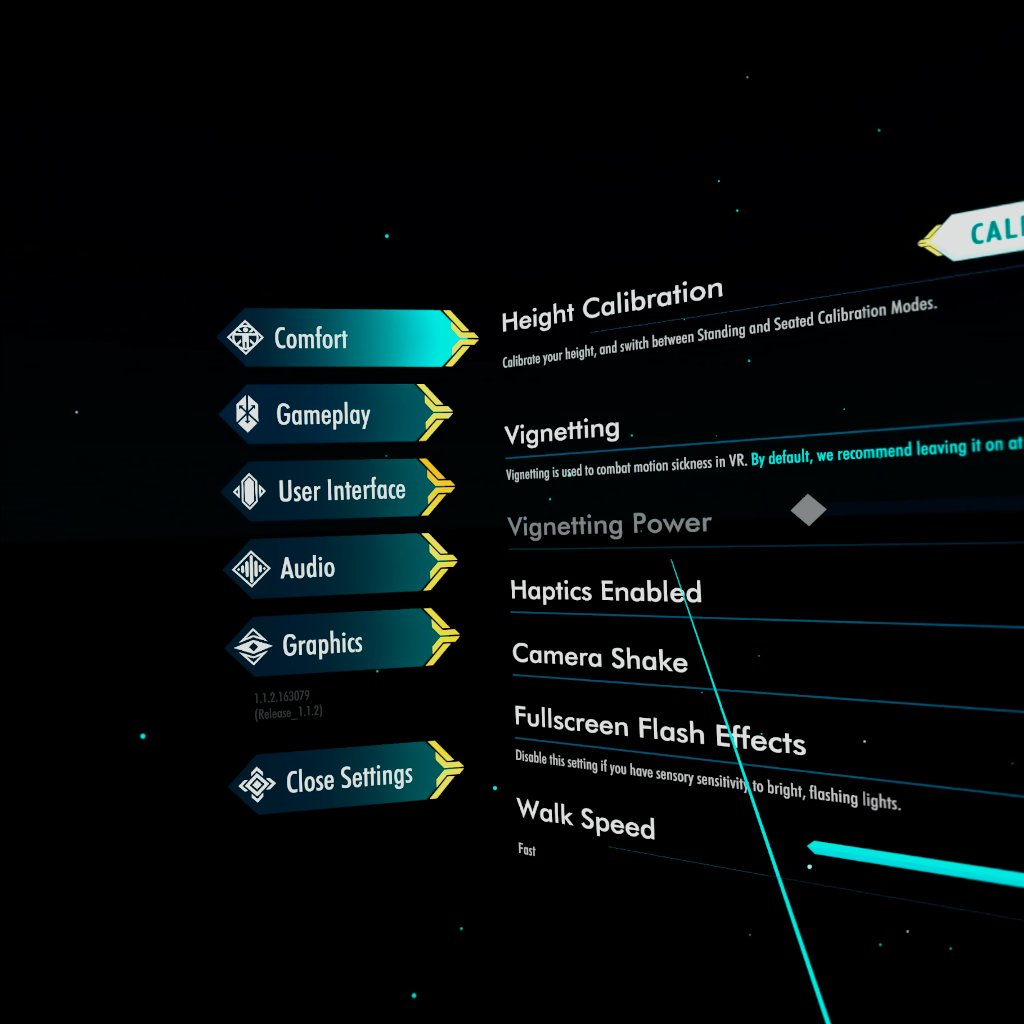 When starting the game, there are several accessibility options you can set to help with issues like the chance of motion sickness and selecting if you are standing or seated. It was nice to see the different options and how customizable they are in the menu. 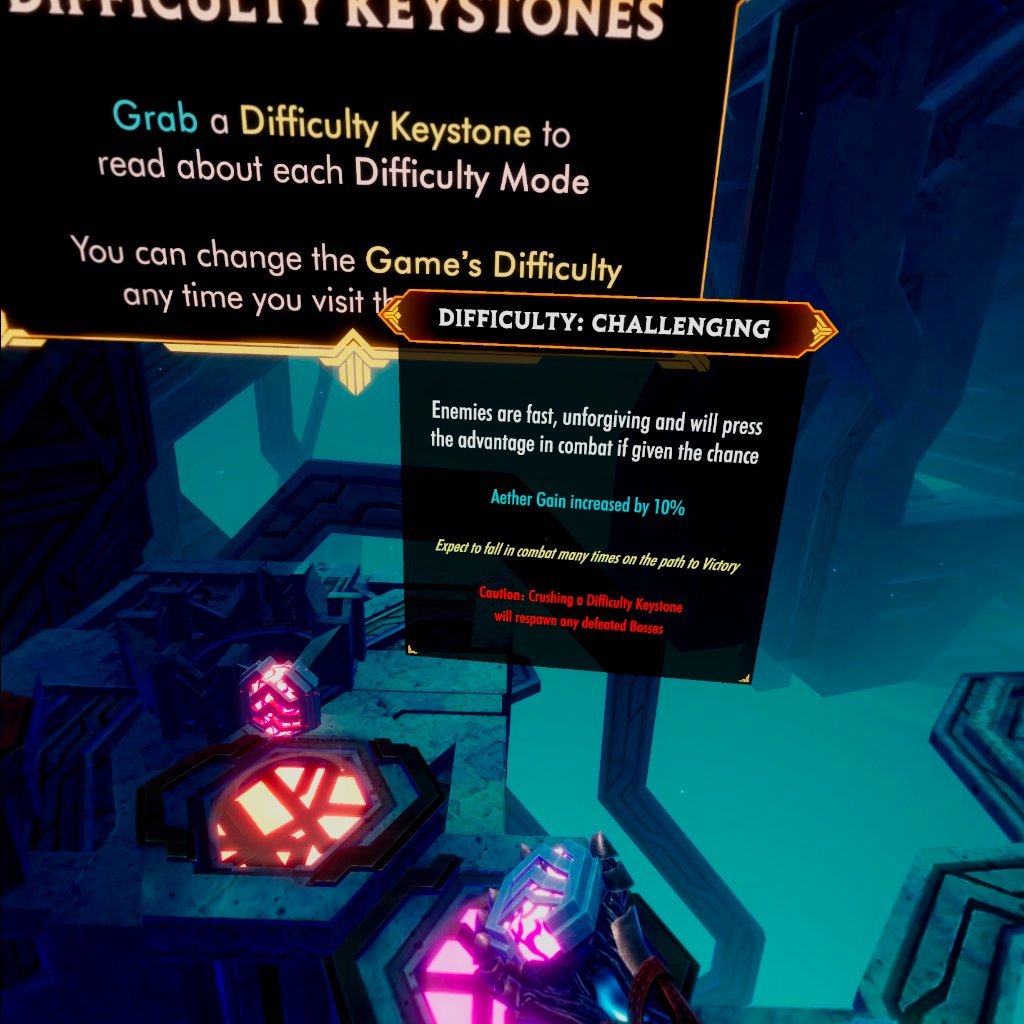 The gameplay difficulty is set in-game at the forge. There are three crystals to choose from, and then you crush one to make the selection. Being the total badass that I am, I went with Relaxed play, giving me a health crystal back after each area I cleared. Other difficulties award more Aether while making the enemies faster to attach. If you find a difficulty setting not to your liking, it can be changed the next time you return to the forge.

Progressing through the game is simple. You enter an area with X number of enemies and fight until the area is cleared, then select from one of three rewards before moving on to the next fight. Rewards are randomized each playthrough and include things like an extra health crystal, heal up to 5 crystals, adding abilities/mods to your weapons, more combo swings, and Aether. 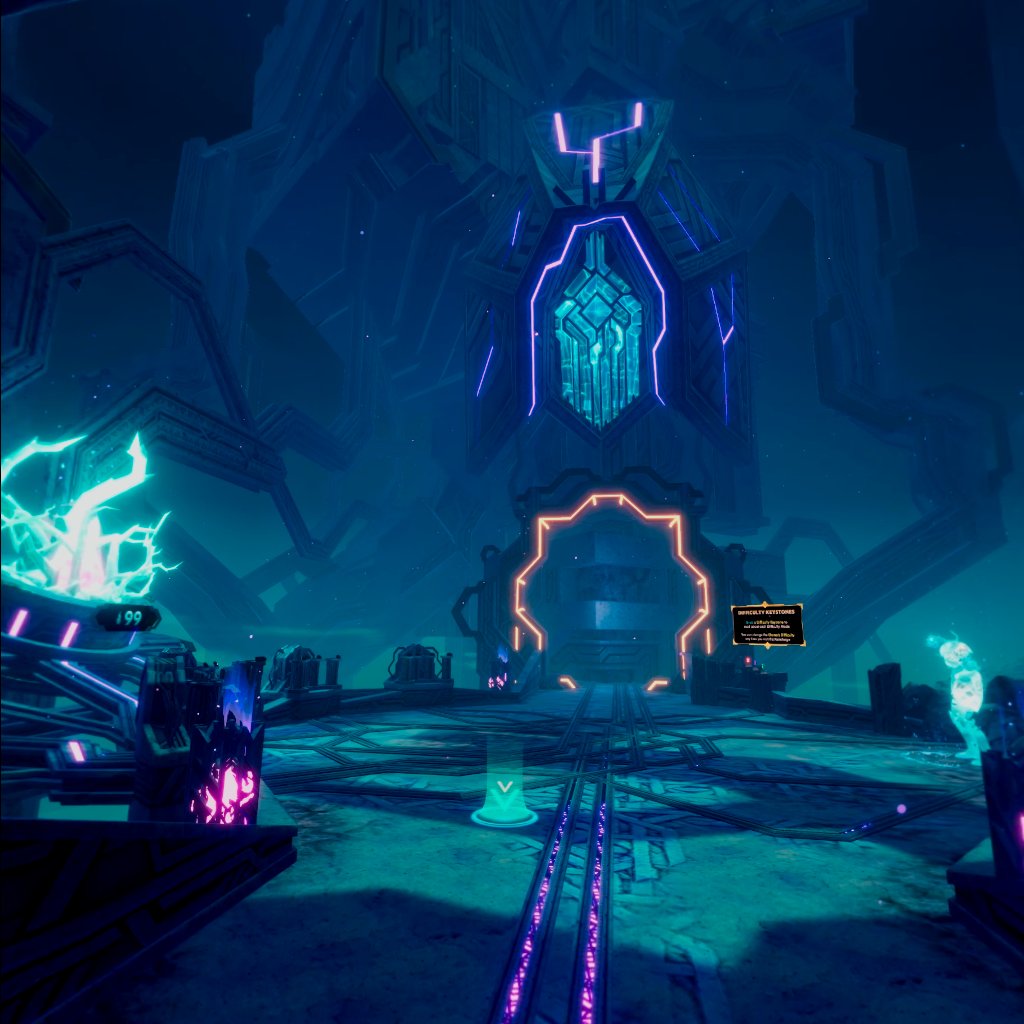 When you die, your character returns to the forge, where you can spend collected Aether on permanent upgrades. You lose any other rewards from the run. As you work your way closer to the city, more weapons will become available to unlock. Aether is used to unlock each weapon and then to upgrade their ranks individually. 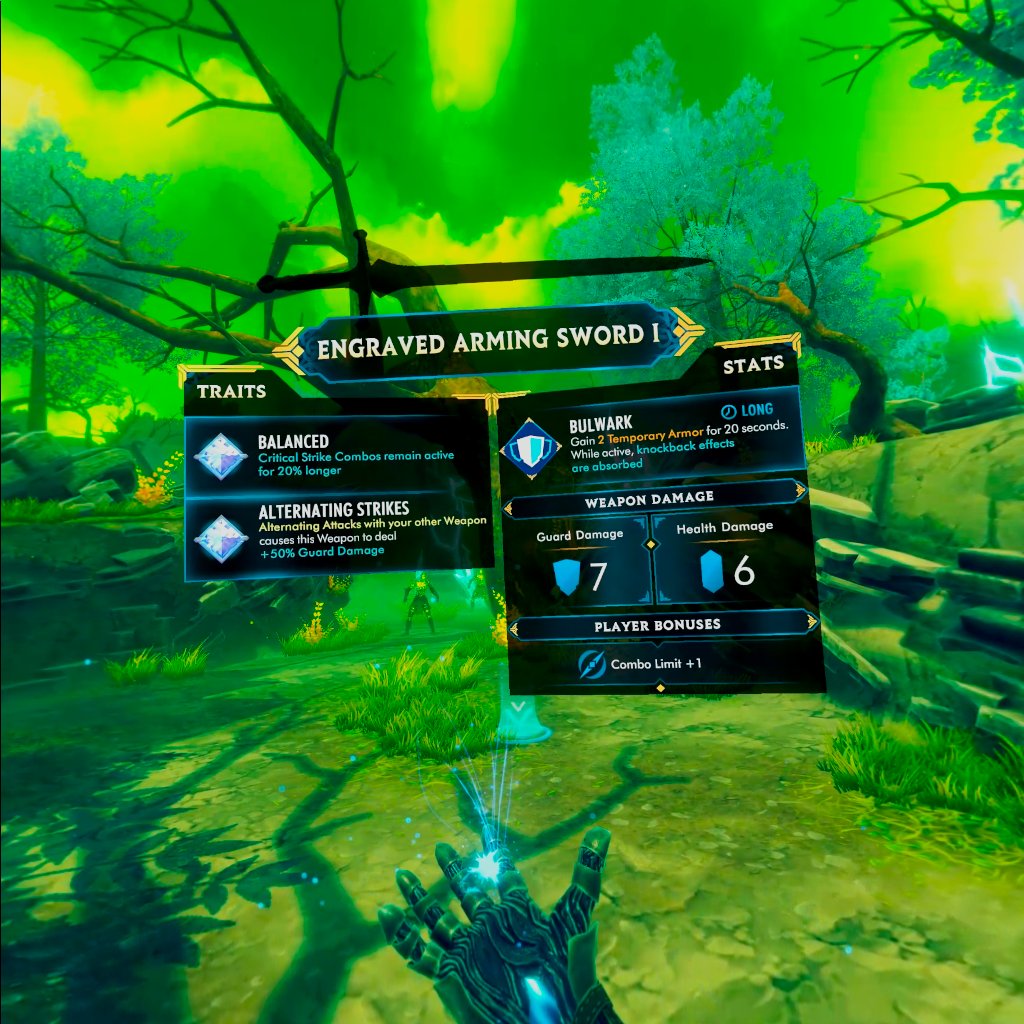 Each weapon has different traits you can see by holding your character’s palm face up and pulling the trigger. They also have different physical properties. For example, the ax swings slower, making it tough to block when compared to a sword, while some weapons you cannot block with at all. These weapons provide other bonuses instead too your other chosen weapon. I found all the weapons to be well designed. While I didn’t necessarily enjoy using each one, they were all interesting to test out. I keep finding myself swapping up weapons to try out different playstyles. Some combinations compliment my playstyle much better than others.

The combat in this game is fast-paced and fun. It gets you moving, and if you are like me, out of shape, you will be sore after an hour of play. You start slowly enough, but after a short tutorial, it quickly picks up pace once the basics are out of the way. Fighting multiple enemies at the same time will require you to think about where you are standing and if anything is trying to flank you. Players also need to move weapons quickly into multiple block positions. Depending on the enemy, the attacks can come at you fast. When it comes to larger enemies and bosses, you will also need to duck and dodge, avoiding unblocked attacks. The game easily gives me a decent workout.

Supporting the combat is a high-energy soundtrack. While some may find that a synthwave soundtrack doesn’t fit well in a fantasy setting, I found the color palette that the developers have chosen helps it feel at home. Also, once you get into a rhythm of moving from fight to fight, the music really keeps you going. 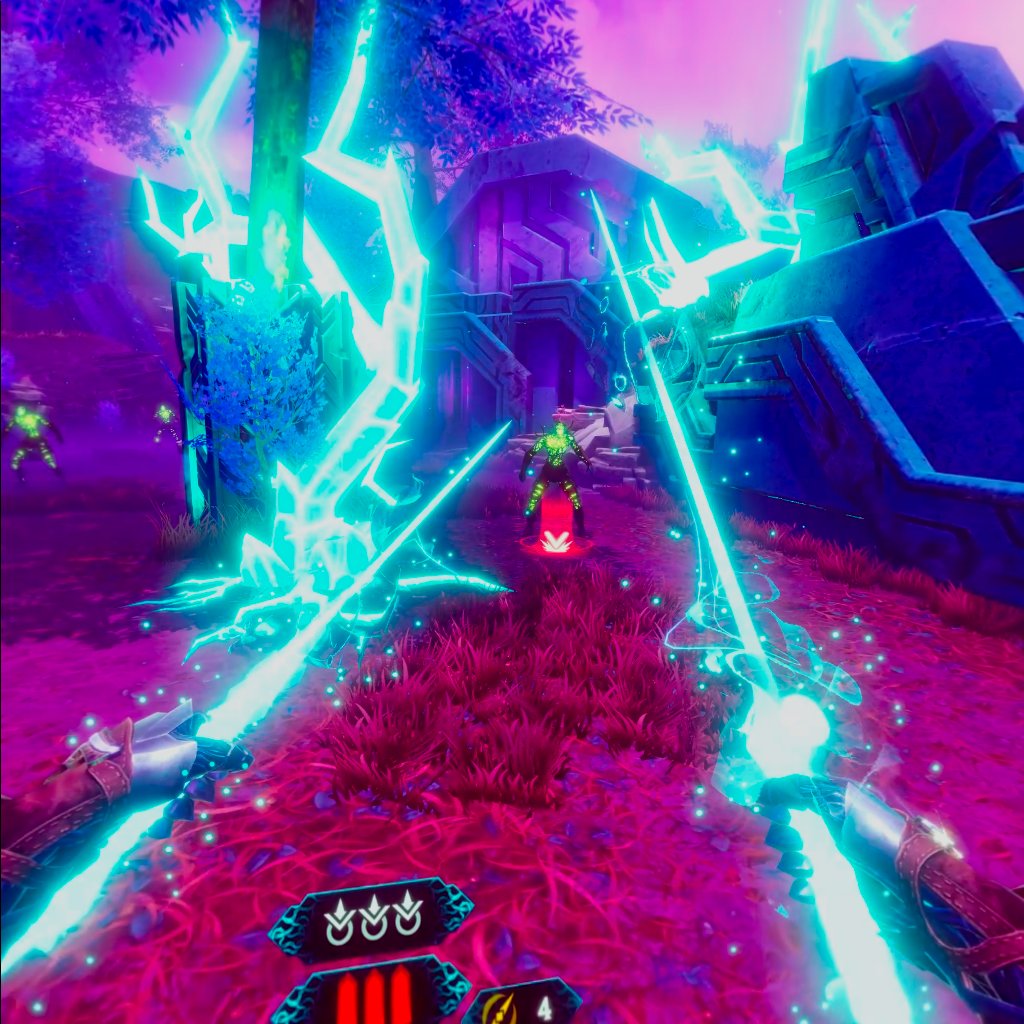 The environment is colorful and almost an assault on the senses. It amplifies that feeling of something strange had happened in the area. While I wouldn’t want to see it in most of my fantasy-style games, it is OK for a change of pace in this one. If the other parts of the game didn’t compliment each other so well, I am not sure it would have worked.

I have only noticed a few minor problems with the game at this point. For those who find roguelike games to be repetitive, you will still find that here as well. Each playthrough does have quite a bit of variability with randomized rewards, enemy placements, and area layout. You are ultimately still making your way from one fight to the next in the same environment, and each area layout is quite similar except for the boss fights.

On the technical side, I had only two issues. First, playing on a Quest 2 and connecting to Stream VR via WIFI, I noticed that the controller tracking was a touch off in certain fights. Nothing that caused me to die. But every once in a while, one of my weapons would be out of place for just a moment. Second, there seems to be a strobe-like flickering when loading between areas, which was not present during early access.

Until You Fall is an excellent VR game. While it has a few minor issues, the entire package comes together to create a great brawler. On top of which players will get a bit of exercise out of it at the same time. The game keeps you coming back for more, and I can see myself playing it well into the future. Even though it may feel a bit repetitive at times, it is one of those repetitive experiences that you can lean into and enjoy. If you are into VR and enjoy fantasy-style weapon combat, make sure to pick this one up.

Tags: brawler, roguelike, Schell Games, steam vr, Until You Fall
Summary
Until You Fall is a roguelite brawler by Schell Games. The game has vibrant environments, a high-energy soundtrack, and is challenging. While the combination of these elements keeps you coming back for more, is it enough for the long-term?
Good
Bad
9
Amazing

Written by
Kevin Chick
Kevin "Xevrin" is an avid gamer having started playing video games on an Apple III with the Wizardry Series and Questron before the age of 10. In junior high, he branched out into tabletop gaming with the release of D&D 2nd Edition. During his first year of university, Everquest was released combining both of his favorite activities.
Previous ArticleBiomutant Celebrates Star Wars Day with a New TrailerNext ArticleBlast Brigade Revealed by My.Games 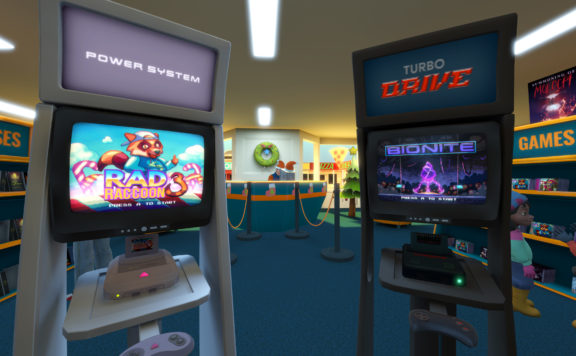 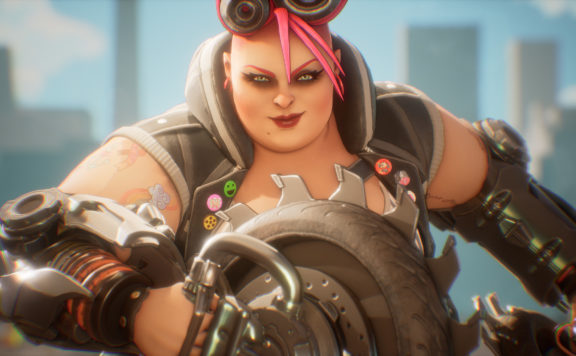 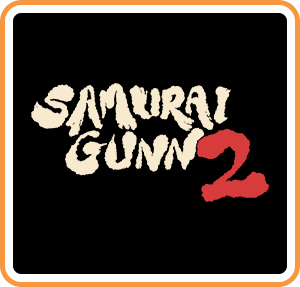 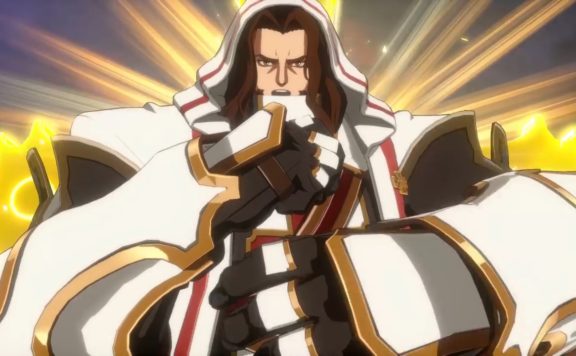 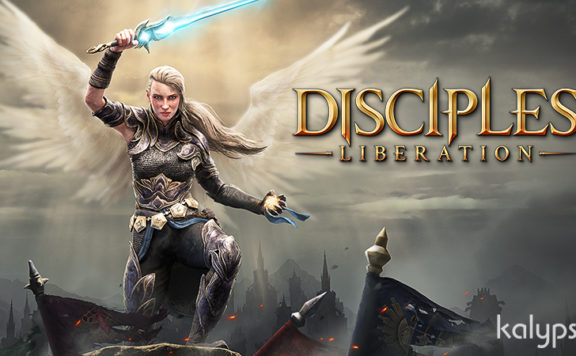