With barely any time between putting down our last controller review, Victrix is already preparing to battle for dominance over your Xbox and Windows desktop with the striking Victrix Gambit controller.

The Gambit controller is one of the latest devices to come out of PDP sub brand Victrix and this controller is certainly aiming to top the rankings, breaking records and landing on store shelves as the world’s fastest Xbox licensed Xbox controller. This seemingly brash claim of unmatched esports performance comes thanks to a ridiculous range of configurable exterior options and a dual core processing center that tops the specifications for this stunningly swift device.

When Victrix forges a new controller they certainly know to make an impression. After slipping the Gambit out its cardboard box the custom purple container for this brand new handheld reveals a hard carry case with a fine weave exterior and a Victrix logo up front. The hexagonal shape and purple logo are more than just a flashy entrance, however, and provide plenty of room to store the latest controller to make its way into our hands as well as all the assorted accessories.

The Gambit comes coddled in the interior of this case and first impressions of this controller are even more striking when it is unleashed into your hands. Victrix continues the eye catching purple and black two tone aesthetic from the case onto the gambit and adds in some sporty detailing. This controller follows the same basic form as the iconic Xbox One controller but throws in a few more aggressive features. Both the interchangeable faceplates include angular lines, lifting active areas of the pad up away from the base rather than smoothing the whole surface down. The palm rests, either side of the central buttons, incorporate these raised edges too, while the traditional home and options buttons now protrude down into the rest of the controller like a pair of fangs. It’s a cutting edge aesthetic that seems built to conjure up images of apex predators but will either catch the eye or instantly turn off most gamers. This set of stylized changes isn’t the only divergence from the traditional Microsoft design either. The Gambit builds in textured and obviously redesigned shoulder buttons, back paddle triggers, clutch controls, and a finish that is designed to provide solid tactile navigation while you’re too busy to look down for the D-Pad.

The Victrix’s esports ethos and attention to detail doesn’t end with the initial out the box configuration. With an eye towards personal preference, a spare set of interchangeable analog sticks give a discrete under-finger feel with a different length of stick and various rubber toped textures available to change up the game. Further down the controller, these control sticks can be further modified with a separate set of octagonal gates, for an alternative tactile response when pushing out across the screen. The default D-Pad also has a separate diamond-shaped top included, there’s an additional back paddle cover, and the hard plastic top even has a purple silicon face, that somehow reminds me of an old phone fascia, which entirely changes the feel of this device in hand. Making those configuration changes and honing your in game craft is surprisingly easy. Each of the major elements jsut pops off the exterior of the gambit with the minimum of fuss, no screws or twisting, and newly added hardware doesn’t require additional configuration. It’s as near to plug and play as it gets. 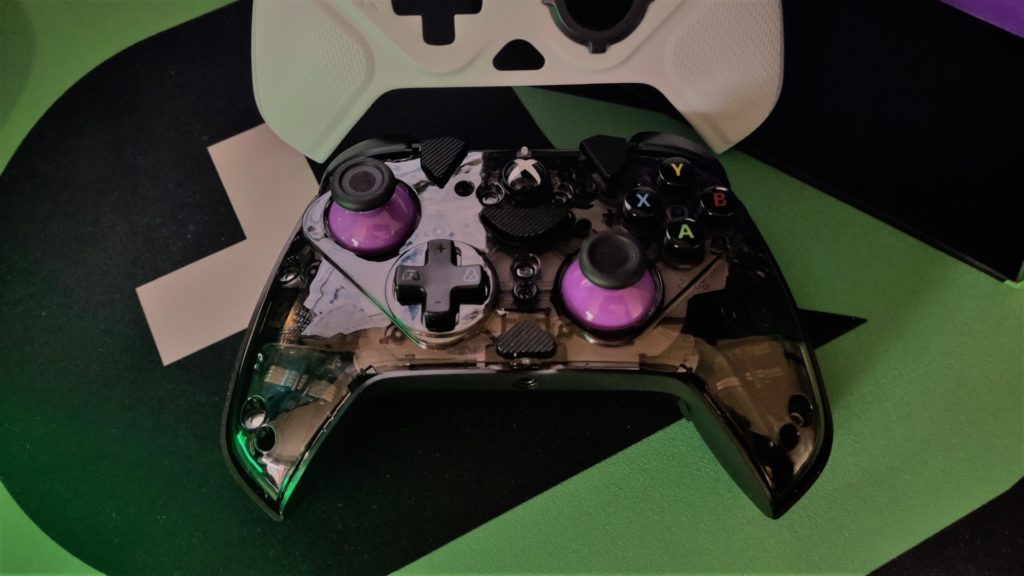 Power In The Palm

No matter how good a device like this looks the final performance needs to justify the $99.99, or local equivalent price tag. After plugging in the decidedly premium braided USB A to USB C wired cable that comes in the box and getting into game, the Gambit feels suspiciously heavy for it’s 243 grams. Most of the mass in this new handheld competitor seems to be distributed around the outer edges, where sweaty palms keep a firm grip on the Gambit. While this might make the device feel a little heavier than expected, it does add heft and gives the feedback from the built-in gyros a presence that other lightweight options definitely do not manage.

While the Gambit isn’t vibrating to something else being eviscerated in DOOM, it’s easy to feel your way around this experience. The familiar layout makes things easy enough to discern, with a set of responsive buttons and a set of analog controllers that are tightly tuned to avoid any messy slip ups. While this tight tuning isn’t going to be to anybody’s liking it allows for responsive movements and a very obvious click on the upwards facing elements of this device and seems to be designed to provide even more force feedback to the person behind any battle station. Beyond first impressions of the Gambit, the backplate triggers are a fantastic addition. While not that unique in mid to top end mobile controllers, they add an extra option for movement and hair trigger reaction in a pinch. Far more transformative are the clutch controlled shoulder buttons, flaring out at the ends to give players the option of precise control or a quick flick and fire action. Thanks to a set of clutch controls, these power shoulders have a range of different trigger distances. unlike a keyboard where a switch will need to be swapped out to change an actuation point, this in built stop control allows gamers to physically change the travel distance of the shoulder buttons by simply sliding the clutch gate across and pressing down the button. It’s an unusual feature but one that makes sense if you’re looking to shave an extra few milliseconds on a repeating fire rifle in the heat of the action.

Available on the Microsoft Store and over at the Victrix support website, The Victrix Control Hub is the base of operations for even more modifications. While the software system doesn’t add a single lumen of obligatory RGB, the number of options is almost more perplexing than a 16.7 million color wheel. 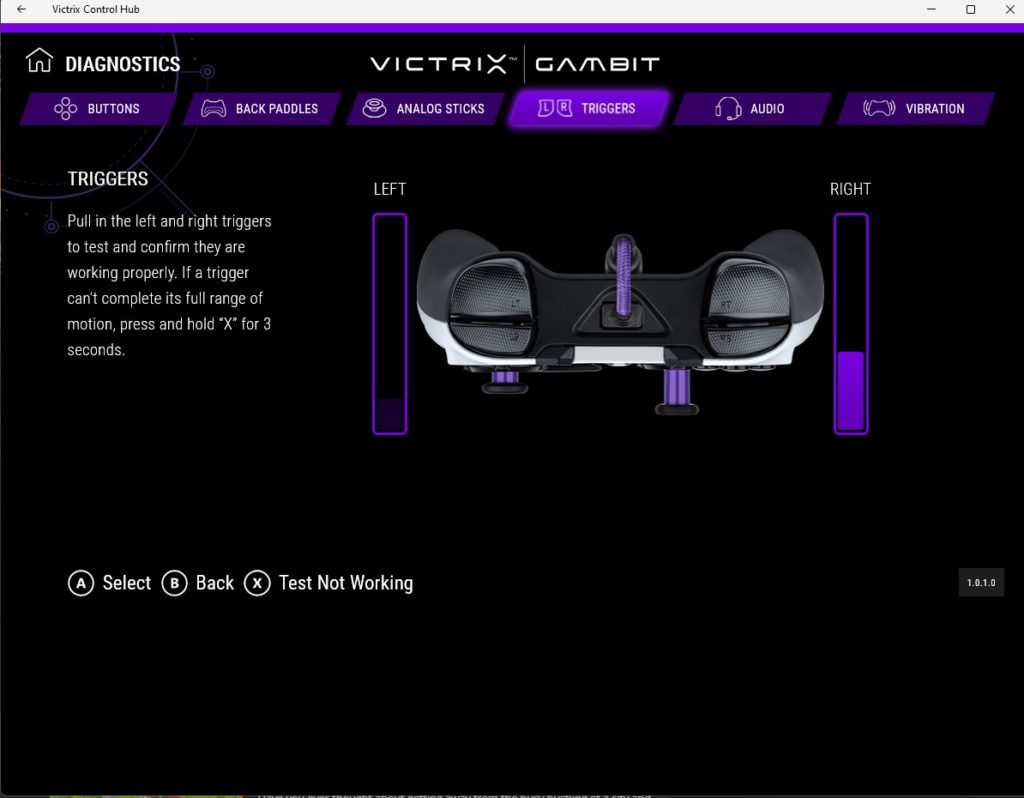 Opening up with a seemingly obvious set of menus, an entire subsection of the software is dedicated to trigger, sensor, and stick calibration. It’s all pretty simple to use but provides a great visual confirmation that the gambit is working, or not, as intended for even the most dedicated ranked tactician. The aforementioned shoulder triggers can even have a software tweak, increasing or decreasing the built in dead zone meaning short rapid bursts of aggression are as easy to deploy as dedicated spray and pray attacks. Almost every aspect of the Gambit can be customized in some way, with most buttons available to remap, but this isn’t any MMO gaming mouse. Don’t expect any on board macro magic here. The esports branding of this device means Victrix draws the line at carrying you into battle on board this silicon and button remapping is restricted to remapping individual icons, not chaining together new combos.

Instead, the dual processor cores inside the Gambit provides a dedicated response system for in game action while creating a solid soundscape using the bundled Dolby Atmos for Headphones license. This lifetime software upgrade is available across Xbox and PC platforms and will thrust almost any clean sounding pair of cans into the middle of the arena in games like Apex Legends, even competing against many dedicated gaming headsets. This also includes the usual chat, and game balance, volume controls, and an adequate range of EQ options. Sure, there are only three sound profiles and the dedicated audio processor can only broaden the soundscape so far, but your headphones are your own individual consideration and almost any plug in option will benefit from the Dolby magic.

Player choice is at the core of the Victrix gambit. From the minuscule changes to trigger depth or the feel of different faceplates to the bring your own audio option. There’s a lot to like about the Victrix Gambit. When we got it in game the tight tuning of the analog sticks, the definite response of the buttons and the configurable shoulder triggers were the sharp end of a fluid and superbly responsive adventure. The whole unit feels fantastic to hold and while it doesn’t have the premium casing of a full flagship device or a chrome finish at twice the price, the minutia of changes that come baked in make this a complete pleasure to take into battle. If you are looking for an edge, or just fancy a step up on the competition then the Victrix Gambit is available now for $99.99 and it is nothing like the competition. Check out the official website to pick up one of these striking controllers if you’re intrigued.

Tags: accessory, Controller, gambit, Hardware, pc, Victrix, xbox
Summary
A distinctive and aggressive looking controller that I almost instantly fell for out of the box. the Victirx Gambit combines a unique two tone aesthetic with an unparalleled range of customization that dials in the optimal arrangement for almost any gamer. While the Gambit does not include all the on board options other devices include, what it brings to the table is squarely aimed at a competitive victory.
Good
Bad
9
Amazing

With barely any time between putting down our last controller review, Victrix is already preparing to battle for dominance over your Xbox and Windows desktop with the striking Victrix Gambit controller. The Gambit controller is one of th...
0
Average User Rating
0 votes
Have Your Say!
Your Rating: 0
Submit
Write A Review