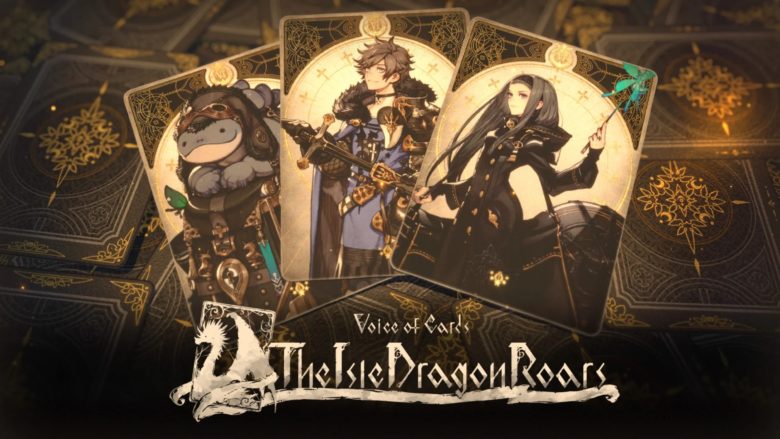 Square Enix is certainly a household name with any RPG gamer or fan. The developer certainly has many strong RPG titles under their belt, most notably the Final Fantasy series. So it was with good reason I jumped at the chance to review what appears to be a different type of RPG for Square Enix, one built on the medium of cards. Originally, I was hoping to get the chance to review the Nintendo Switch version as the game, at face value, looked like it would work well on a handheld system. Nevertheless, I got the chance to review the PC version and I’m glad I did! So join us as we review a game that was released last October but might be one you overlooked. Welcome to our review of Voice Of Cards: The Isle Dragon on Steam PC!

Square Puts All Its Cards On The Table 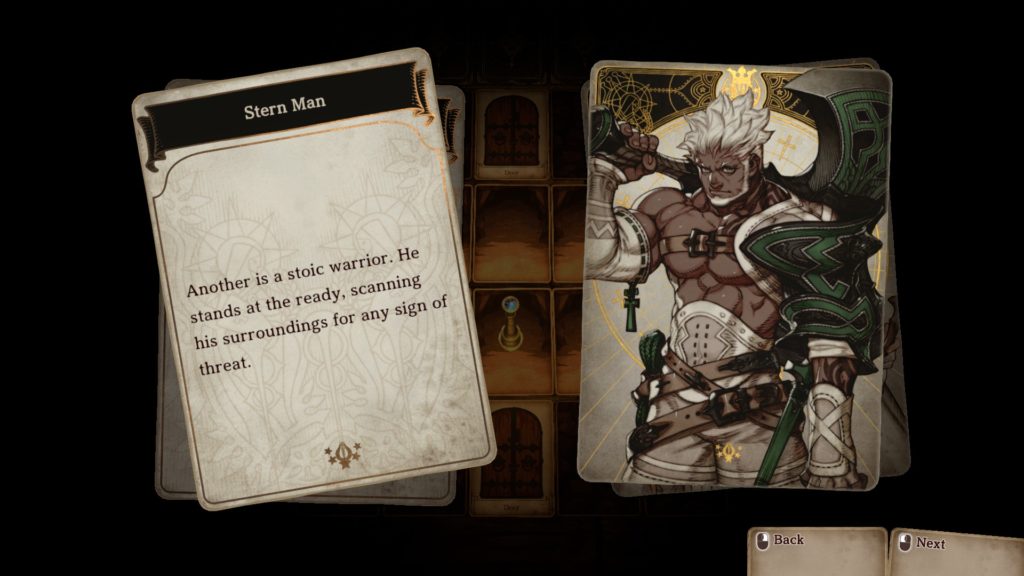 The game master will read all card text out loud.

I guess when you take a shot at something out of the norm you need to assure success by throwing great talent at a project. This is exactly what Square Enix did with the team behind Voice Of Cards: The Isle Dragon Roars (VoC: TIDR). The game was developed by the creative talent behind the NieR and Drakengard series, including; Yoko Taro – Creative Director (Drakengard, NieR series), Yosuke Saito – Executive Producer (NieR series), Keiichi Okabe – Music Director (Drakengard 3, NieR series) and Kimihiko Fujisaka – Character Designer (Drakengard series), to name a few.

VoC: TIDR is an RPG that uses cards and dice as a presentation and game engine. It’s a combination of a tabletop RPG meshed with an audiobook, complete with a fully voiced “game master” who does the storytelling. For the English version the developers brought in American voice actor, Todd Haberkorn whose voice credits in animation, films, and games is a mile long. Todd does an incredible job of reading card text with passion, emotion, and clarity. He really draws you in as the game master resulting in an entertaining and relaxing experience. Even during some of the battle moments, he congratulates you on a win or moves, much like a distant voice in a fog.

Everything You’d Expect From An RPG

The story behind the cards is one of swords and sorcery. The story follows a set of self-proclaimed heroes as they set off to slay a recently awakened dragon. What’s unique here is that the prime character you play isn’t the typical hero. Your hero sometimes has to choose between some rather curse answers and behavior. It’s not as dark as playing the villain but it is a nice departure from playing an always uplifting, positive hero. One example is a Woodland archer who wants to join your party. You as the prime character can choose one of two ways to respond with one being something non-heroic, e.g. “No way, I don’t want to split the reward with another person”. 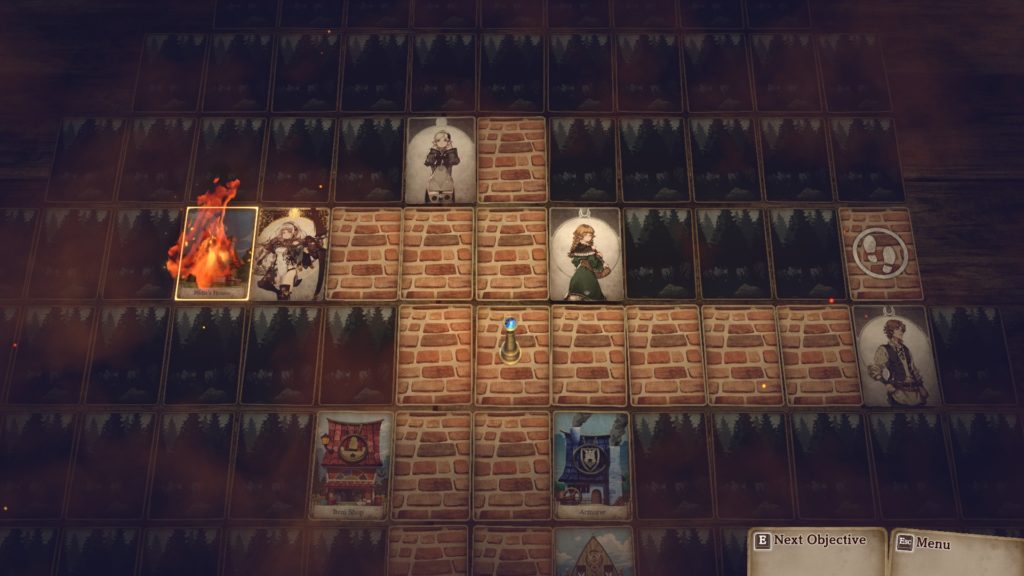 A typical playing field, in this case, a town.

All movement is represented via aboard game-like pawn that represents you and your party moving on a table of face-down cards that act as squares. As you land on a card the card is turned over face up and revealed. These tabletops represent your maps. It’s also where random PvE battles and events occur. The whole presentation for some reason compelled me to make sure no card was left unturned. In doing so I found extra loot in chests at the cost of many moves and a few more card battles. Pawn moves aren’t limited to a single “square” (card) at a time as you can jump over many cards if the cards in your path are already revealed. 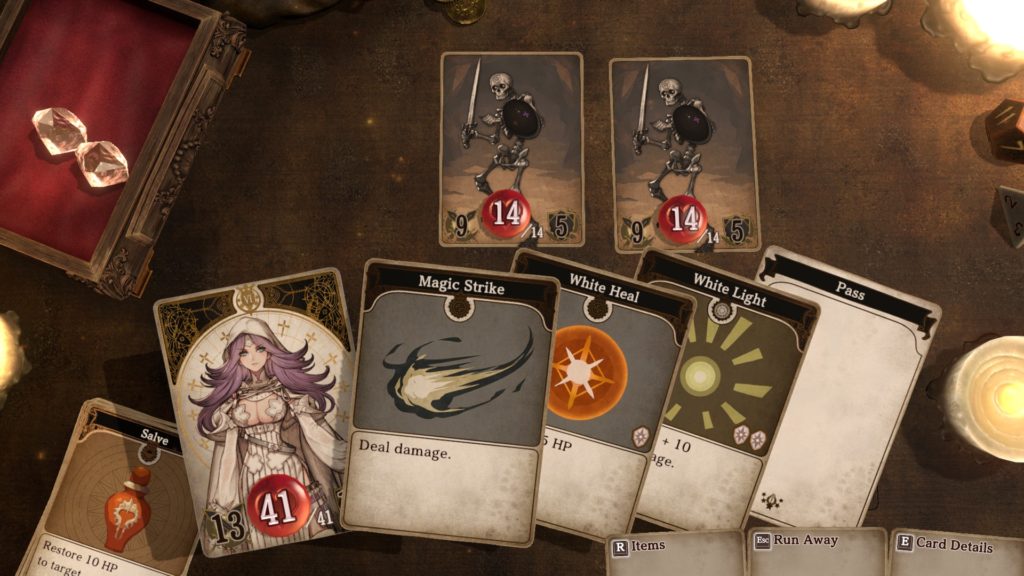 A mage goes into battle

Battles are turned-based. When a party member takes a turn their skill cards, a maximum of four in hand, are revealed as well. You then drag a skill card onto a target mob card, or in some cases, an ally card. Most skill cards cost crystals to use. During a battle, you’ll generate one crystal per character turn. So you’ll have to plan your card setup and battle strategy accordingly. After completing a battle and surviving you’re granted gold and experience points. As your party levels, they’ll automatically unlock different skills. Since you’re limited to using four skill cards per character for battles you’ll need to choose wisely which ones to swap out as you level. 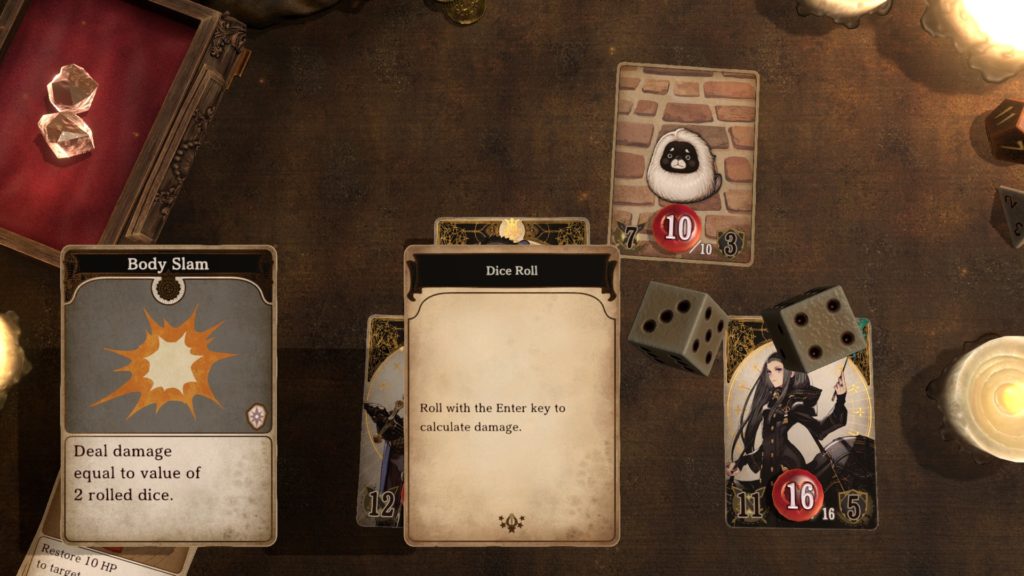 Body Slam damage is based on a dice roll

Some skill cards not only cost crystals but their damage value, debuff effect value, etc. are sometimes determined by a dice roll. This is by throwing a pair of six-sided dice or even by throwing a single 12-sided die. The rolling dice animation starts automatically and you select the enter key or mouse click to stop the throw. It adds a D&D touch to the game. Skill effects are entertaining animations as well as character cards acting out slashes or throwing flames, etc. all with the appropriate sound effects.

As you get further in the game you’ll add members to your party but your frontline team, the one that goes into battle, is limited to three party members. Everyone else is in reserve and can be swapped in. Thankfully, even your reserves gain experience from battles. 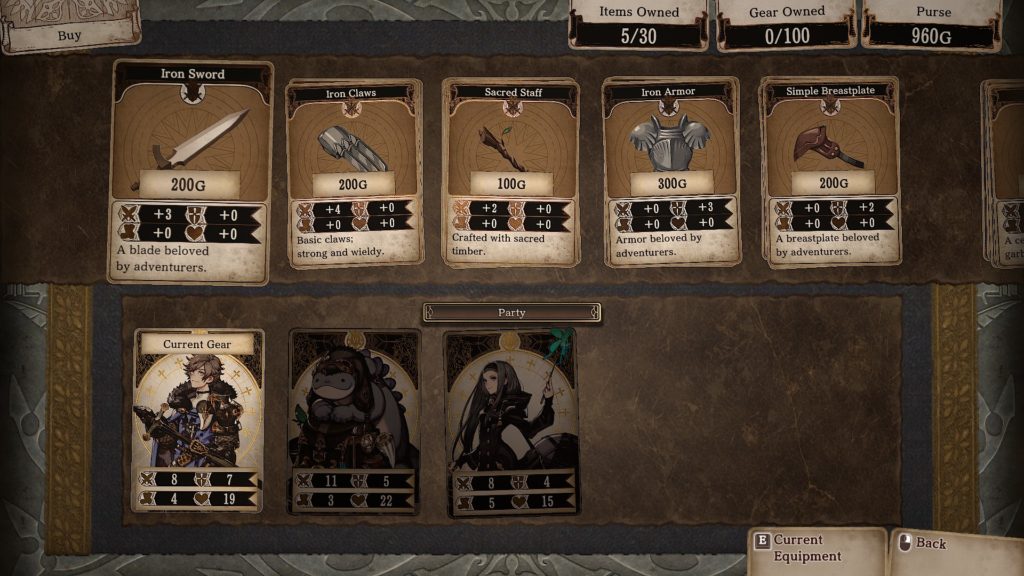 Equipment management is a must

In an RPG-like fashion, you have equipment cards to manage, NPCs to meet who sometimes grant equipment, and other cards. And you’ll also have shops to visit where you buy and sell equipment, potions, etc.

There’s also the “Game Parlor” which is a mini-card game in the card game itself. It’s a game of getting the most and highest valued pairs over your opponent. 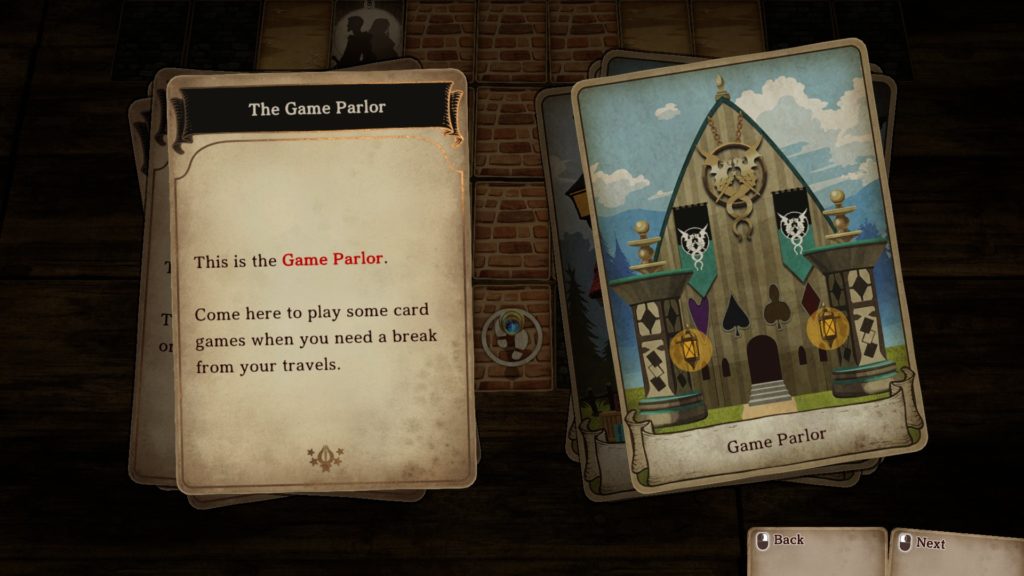 The only complaint I could muster up is that sometimes the response/menu cards that peer out from the bottom of the screen needed two mouse clicks. One to pop the response card up and then one to act as a select or enter. Otherwise, this was an entertaining journey and even though the mechanics and presentation platform is different, Voice Of Cards: The Isle Dragon Roars still exudes all the quality and style we’ve come to expect from Square Enix RPGs!

Tags: card games, JRPG, square enix
Summary
Square Enix's attempt at a card-based game has come up all Aces! The spoken story and card mechanics are relaxing and entertaining. The JRPG-like artwork is beautiful and fits the presentation well. Everything about the game retains that Square Enix RPG charm we've come to expect! The game compels you to leave no card unturned and when all is said and done Voice Of Cards: The Isle Dragon Roars is a welcome break from the hectic and frantic pace of other game types!
Good
Bad
9.2
Amazing
Previous ArticleThe Sims 4 Revealed Carnaval Streetwear KitNext ArticleCrusader Kings III – Check Out the Release Date Trailer 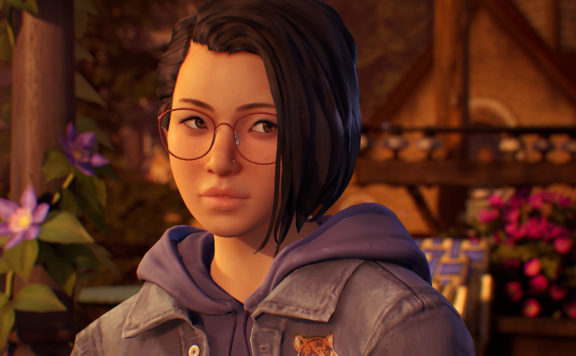 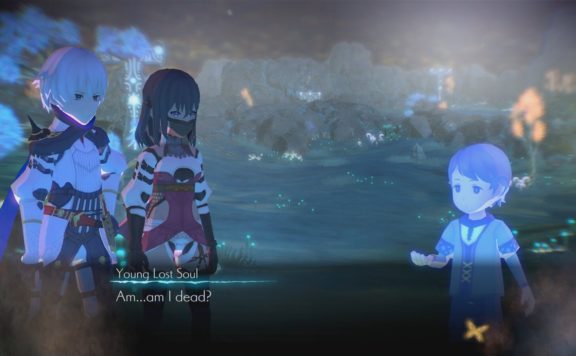 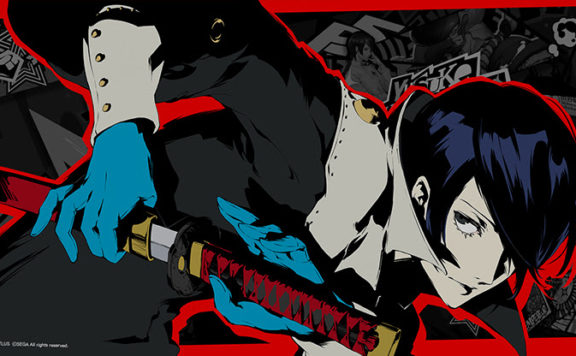 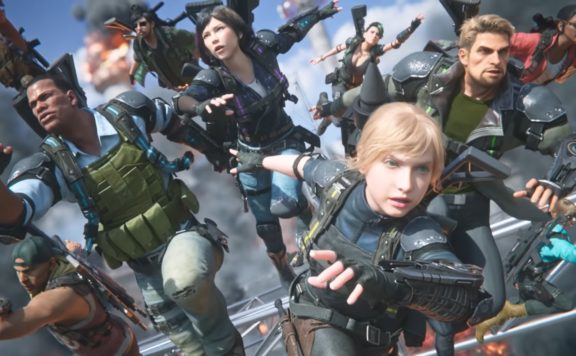 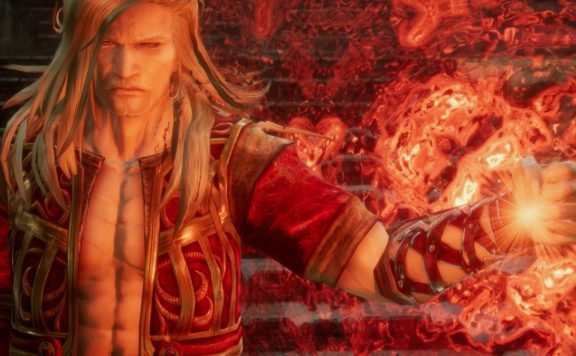 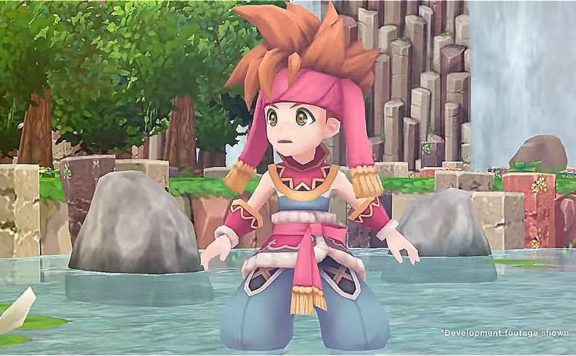