The NexTemplo 4-in-1 Switch Kit  honestly couldn’t have come at a better time in my life. With a solid carrying case, space for physical games, Bluetooth earbuds, and a variety of other accessories, I was pretty set for a few days of moving across states and settling into my new room.  I was a little concerned when I first received the kit because there weren’t any instructions, but the team over at NexTemplo has a nice set of guides online to help you through the setup and identifying the various accessories.   In the future, I hope to see them include these in a pamphlet form the customer can reference more easily.

If you haven’t heard of NexTemplo, fret not- they’re a group of passionate and talented creators that have only recently launched the NexTemplo Switch Kit on Kickstarter! If the 4-in-1 Switch Kit is anything to go by, I think they have a bright future in the third-party accessory market.

Having a protective, sturdy case for traveling with your Nintendo Switch is a must, and NexTemplo provides just that with a nice mesh pocket to contain all of your accessories as well as two flaps with 20 card bridge slots. I expected a few slots, but 20 is actually fairly impressive. The positioning of the flaps is also nice because it covers the Switch’s screen so it is protected nicely.

The Switch sits comfortably in the NexTemplo 4-in-1 Switch Kit case, with a hook and loop design that is meant for all of the console’s grooves and strange curves and is shielded by the case’s hard shell and internal EVA foam. If you’re as accident-prone as I am, this is an absolute godsend. No more worrying about accidental bumps or drops when you’re determined to make it into your apartment after a long night of gaming with all of your bags in your arms. Oh. Just me? 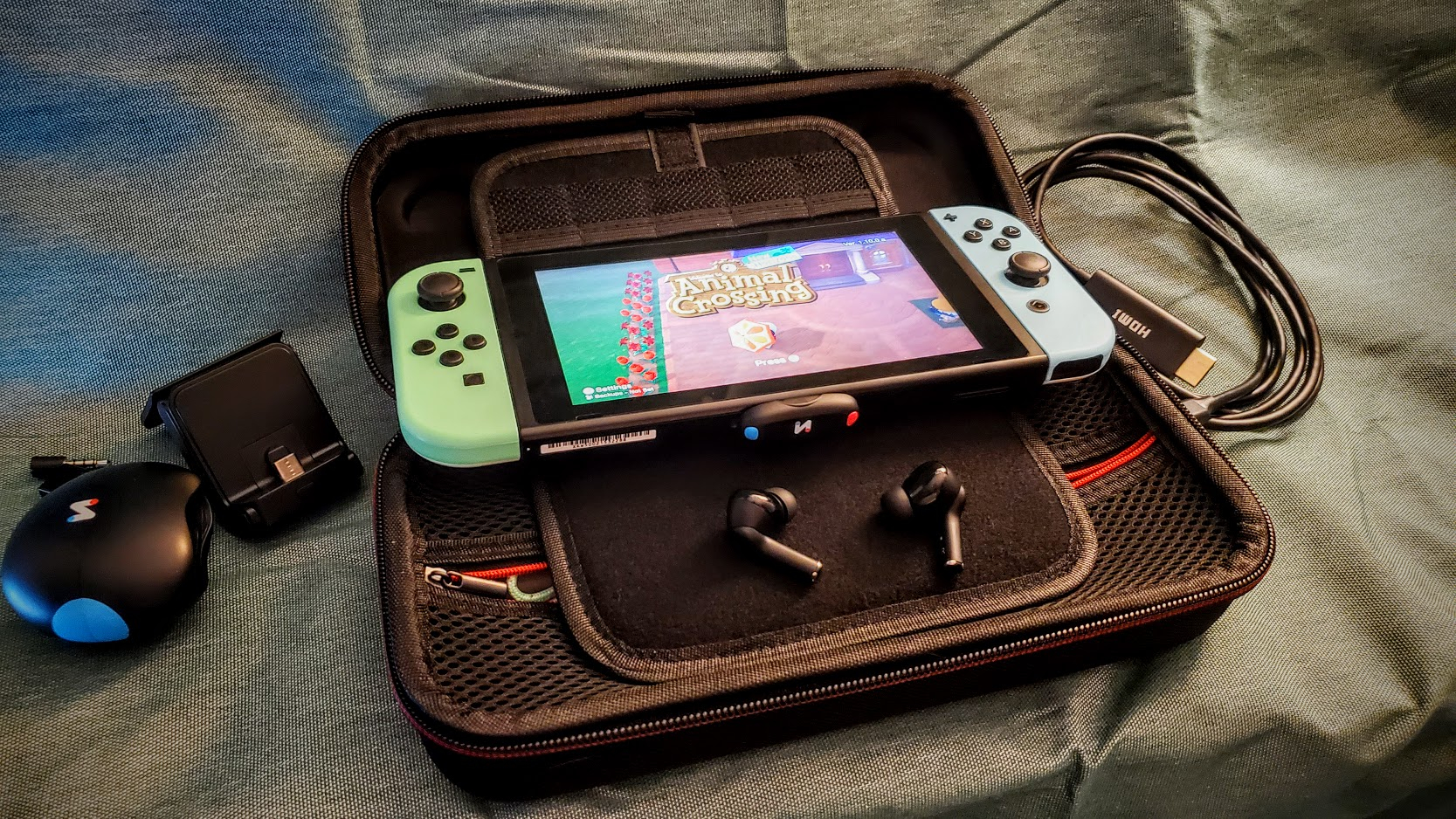 The charging dock, seen to the left, is perfect for travel.

Inside the mesh pocket is a variety of accessories designed to truly convert your gaming setup to the one you can take on the go. The first I noticed is a tiny, square docking station with a small stand. This is an incredibly innovative and fantastic improvement on Nintendo’s traditional docking station, with a green LED on the front to indicate when the device is charging.

The docking station is a little unique, in that it is actually a charging station. You can dock your Nintendo Switch, plug in your Nintendo charger on the left side, and the right side fits the Bluetooth earbud adapter which we’ll talk about later. This docking station is focused completely on letting you both charge your device and play it at the same time, and is 100% compatible with the original Switch charger, meaning you don’t have to worry about “bricking” your console. 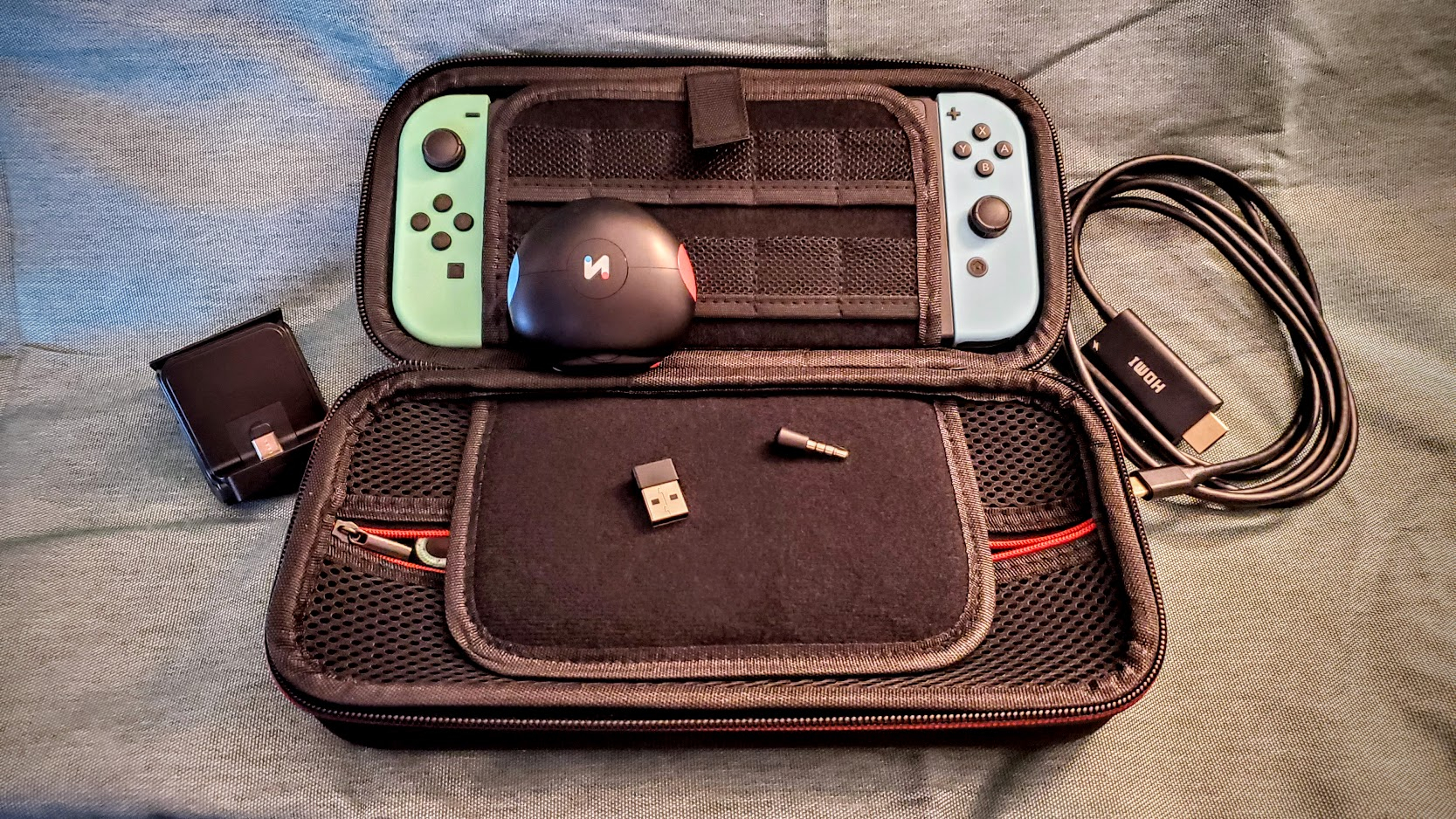 The custom HDMI cable can be used to connect your Switch to a larger screen without the need of a dock.

To play your Switch on the big screen, you only need the custom HDMI cable included in the NexTemplo 4-in-1 Switch Kit and your original Nintendo Switch charger. There is a second slot on the HDMI cable that you can plug your charger into, keeping everything streamlined and making life so much easier to transfer between different gameplay styles. I was very impressed with the custom HDMI cable because it would have been easy enough to just throw one in there, or make a cheap one with some slight changes. Instead, they created an entirely custom HDMI cable that allows you to combine the charging cable as well, and it’s lengthy, AND it doesn’t feel cheap! Bravo NexTemplo.

While I was initially confused at first by the company’s decision to separate the dock from the HDMI cable, I think I came to terms with it after playing with the kit. Users really don’t necessarily need the dock with the HDMI cable in order to enjoy a big screen experience. The charging dock allows you to both charge, play, and utilize the Bluetooth earbuds all at the same time-where without it, you might only be able to do one at a time since there is only one type C input. 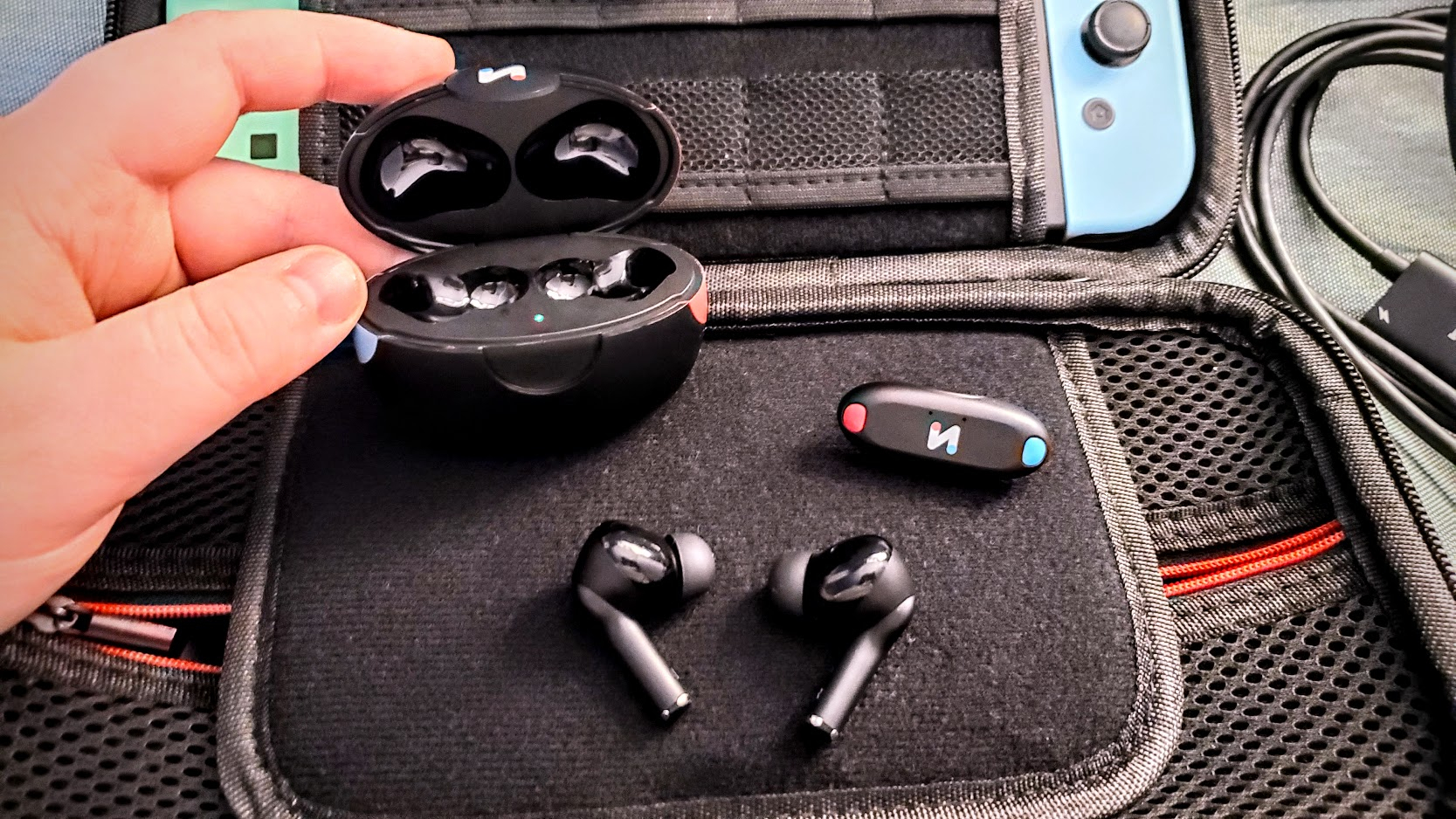 The NexTemplo Bluetooth earbuds and adapter can be used on a variety of consoles.

Let’s talk about the Bluetooth audio and earbuds a little bit. Included in the NexTemplo 4-in-1 Switch Kit is a little black super shroom with the traditional red and blue Switch dots, two wireless earbuds inside, and a Bluetooth adapter hidden at the bottom. Admittedly, it took me a few moments to figure out how to open the little thing. Like most Bluetooth earbuds, it is magnetic! The little shell flips open to reveal the two nested earbuds and has a nice LED indicator to reveal when they’re paired.

The Bluetooth adapter is hidden at the bottom of the shroom with matching blue and red dots on either side. These dots are actually buttons that you press to pair with the Switch. I wasn’t super fond of this Bluetooth adapter because it’s kind of hard to take out of the shroom-especially if you don’t have nails, but it is very handy. The NexTemplo Bluetooth adapter actually allows you to utilize any of your favorite Bluetooth earbuds, not just those included, and only draws about 0.3% of your Switch’s battery is in use. The NexTemplo earbuds themselves are also diverse and can be utilized with any device that supports Bluetooth 5.0, with about 11 hours of playtime from the charging mushroom.

As a bonus, the Bluetooth adapter can also be plugged into your official Nintendo Switch dock (the big brick one) at home late night gaming without waking up the folks. To accomplish this, the kit includes a handy USB-A to Type-C converter which can be stored in the case for safekeeping when not in use.

For those that enjoy FPS games, there’s also an analog microphone included in the kit. This microphone is relatively tiny but also fits in snugly behind the mesh netting so you never have to worry about it falling out of the case during your travels. I personally don’t have any games that use a microphone, since I tend to gravitate more towards RPGs, but it is an unexpected and welcome addition that adds value to the kit nonetheless.

NexTemplo has definitely put a lot of thought into this kit and wanted to make it as diverse as possible. There was a lot of love and thought put into really making this kit something you want to keep nearby at all times. The Bluetooth earbuds can be used in a variety of ways with just about all of today’s top gaming consoles and not just on the go. Being able to use most of the accessories at home with the official Nintendo Dock as well goes to show that they aren’t looking to replace any current tech you have, but really enhance it and escalate your gaming experience to that next level.

Honestly, I loved everything about this kit. The shell and accessory parts are made of quality materials that feel good in your hands and give you the confidence you need to take them on the go without worrying about their safety. I think NexTemplo set out to deliver a diverse product that they wanted their customers to reach for again and again, with confidence, that they could also use in their daily lives outside of gaming-and they definitely achieved that goal.   There are a few different kits available on the NexTemplo 4-in-1 Gaming Kit Kickstarter, but I would highly recommend the 4-in-1 kit since it contains a solid variety of accessories that work together and with your existing Nintendo gear without worrying about bricking your console. Currently, you can purchase the 4-in 1 Gaming Kit for  $109  (42% off) instead of the  $187 it will be priced at after the Kickstarter ends. 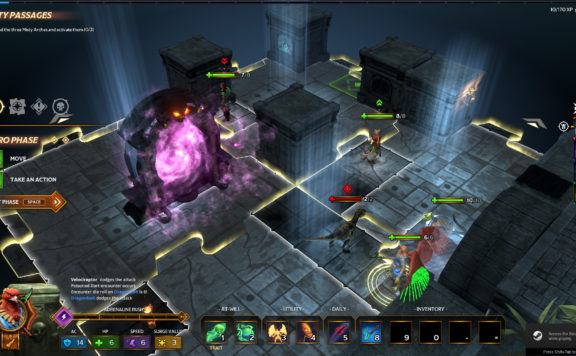 The NexTemplo 4-in-1 Switch Kit  honestly couldn’t have come at a better time in my life. With a solid carrying case, space for physical games, Bluetooth earbuds, and a variety of other accessories, I was pretty set for a few days of moving...
0
Average User Rating
0 votes
Have Your Say!
Your Rating: 0
Submit
Write A Review