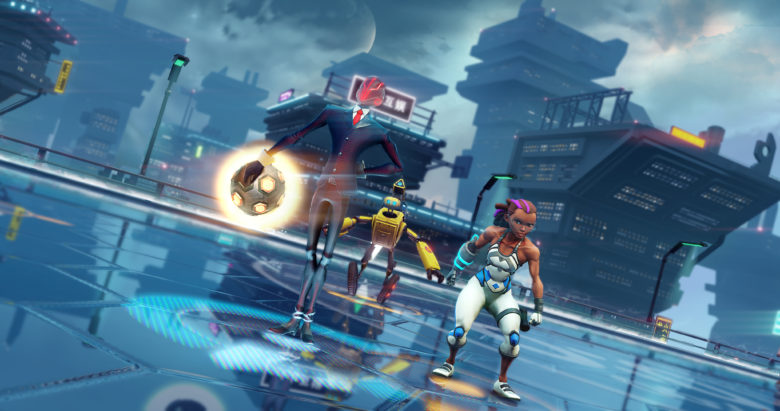 Escaping from the bustle of the indie room, I didn’t expect to find a reminder of home hidden around EGX Rezzed 2019. After staggering into the Greenman Gaming room, I found an imposing Scottish piper towering over me. I was about to meet Steel Circus, the new online arena experience from Iron Mountain Interactive.

For those of you old enough to remember games like Sensible Soccer and even Pro Evolution Soccer’s early days, Steel Circus might kindle an ember of recognition. The rest of you will instantly attribute this to experience with Rocket League and that’s not entirely unfair. Steel Circus is, like vehicular MOBA Switchblade and Notmycar, an attempt to take on established concepts and give them a fresh new twist. Coming to PC as an early access title, later this year, it is developed by Iron Mountain Interactive and published by Oasis Games. Unlike it’s more MOBA inspired counterparts, this new competitor is less about getting good DPS and more concerned with putting the ball in the back of the net. 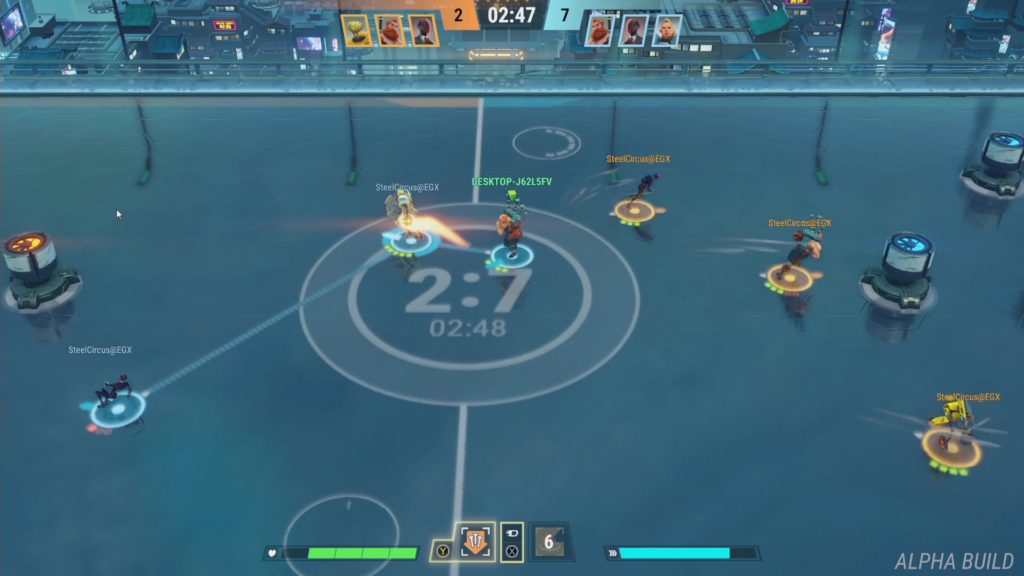 From afar, Steel Circus does indeed look like Rocket League with bright colors, a nice wide arena with plenty of space to get into trouble, and a flashy orange ball bouncing around the arena. Don’t let the bold graphics and game format confuse you. At its core, Steel Circus is a football, soccer to you in the new world, game that happens to ride the same wave as the competitive arena brawler. Steel Circus owns a very particular, and well-considered space, in an already crowded market. Where Amazon’s breakaway dropped the ball and tried to add a sports component to an arena brawler, Iron Mountain Interactive is building a quirky sports game with some action elements. With inspiration coming from titles like Mario Strikers, it is clear to see what the end goal is for Steel Circus is.

Iron Mountain Interactive has taken the core soccer concept and developed a top-down, 3v3 competitive title that borrows from the recent surge in hero shooters and classic sports arcade titles. Situated in a bright blue arena, my hands on at EGX Rezzed put two teams of three against each other in a timed match. Each player in a Steel Circus takes control of their own hero, chosen from a roster that only contains four characters right now. Despite being a little sparse right now, characters still feel varied. While the EGX Rezzed demo only housed a few of these heroes, every competitor in Steel Circus feels distinct. Even in its early stages, the game has a set of characters that fill very different roles. Along with his own unique theme, my bagpipe wielding brethren played like a tank, taking up space and stunning enemy players in order to keep the defensive lines clear. This includes two special skills, a stunning splash of sorts and a supportive swansong. Yes, he plays those bagpipes.

Other characters, meanwhile had greater mobility. Some could drop targetted artillery on the field of play while some could even sneak across the field of play, using tricks and traps to disrupt opponents. This makes team composition incredibly important when the ball falls to the more dedicated player and they already exist. MIKE from Iron Mountain confirmed noted that the game already has plenty of ardent fans

“This is only the third time we’ve opened the game up to the public and we already have around 3000 people in our Discord. There are already teams forming and we’ve even got a coach helping out players”

Don’t be surprised if a competitive scene appears in good time here and the game continues to grow. Once the game leaves testing and early access, Iron Mountain is looking to introduce balance updates every few weeks, with major updates bringing new arenas or champions every 6-8 weeks. 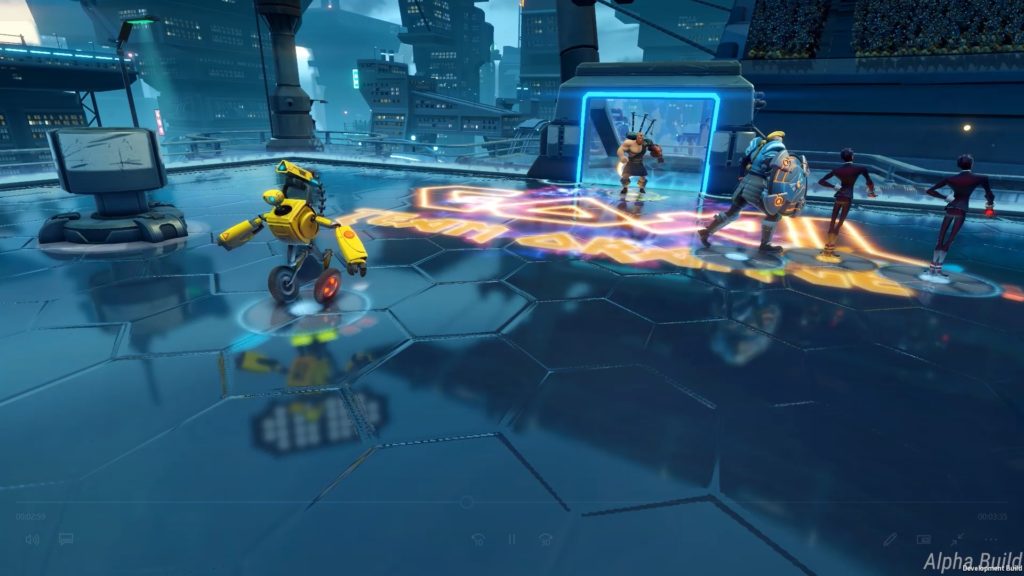 In the end, Steel Circus is a game that will live or die on its audience uptake. The game is very easy to pick up and get straight into. It relies on the core gameplay mechanics that make soccer one of the most ubiquitous sports in the world and the controls reflect this. During initial testing, Iron Mountain found that it took as little as 3-5 minutes for a new player to really grasp the core controls, and navigating the top down arena really is as easy as you might expect. Passing, tackling, and two extra hero skills do not add much more complexity than you’ll find in Fifa while the game’s hero mechanics, hyper-real physics, and flashy visuals push the whole experience towards the arcade action. Shortly after my own match kicked off, things descended into the sort of glorious chaos that makes games like Mario Kart and Sensible Soccer hilarious fun. Steel Circus is fast, flashy, and hides a deceptive amount of depth in the hands of skilled players. For the masses, however, this could turn out to be a well-considered alternative to Rocket League. There might still be plenty of unanswered questions, including beta test dates and monetization models, but the proof is in the playing. As I watched the Steel Circus booth through the weekend, it was crammed full of kids. Far more nimble and capable hands than me seemed to spend hours weaving around the arena and scoring for glory. If you’d rather hit the back of the net than mow down your enemies, or maybe just want something a little more outlandish than the humdrum performance of Huddersfield Town then you can sign up for alpha testing on the official website or check out the steam page.

Written by
Ed Orr
For those of you who I’ve not met yet, my name is Ed. After an early indoctrination into PC gaming, years adrift on the unwashed internet, running a successful guild, and testing video games, I turned my hand to writing about them. Now, you will find me squawking across a multitude of sites and even getting to play games now and then
Previous ArticleStar Wars Jedi: Fallen Order Influenced By Clone Wars And Star Wars RebelsNext ArticleEpic Seven Devs Tease New IP Crossover Among Upcoming Updates 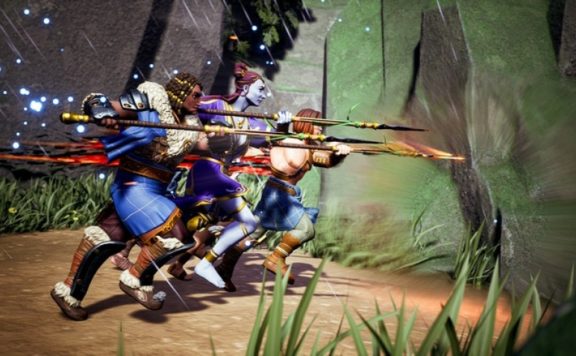