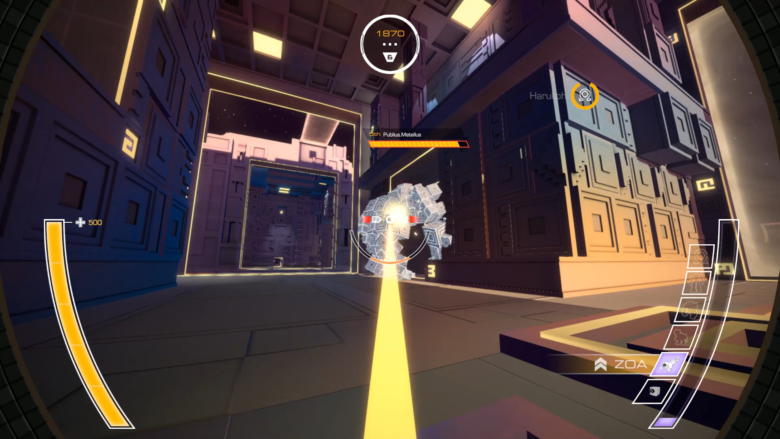 The atom, the zoa, the dinosaur, man himself, no this isn’t describing your sixth-grade science class, these are some of the actual character evolutions in Atomega, a game developed by Reflections (an Ubisoft Studio). Atomega has no real story to speak of. It has a premise, that this is the last battle of a dying universe. It isn’t pushing any boundaries graphically or mechanically in the gameplay department. Instead it focuses on growing for character balance to differentiate itself from other games.  It doesn’t have a roster of character and class selections or complex game modes. It has an evolutionary class system and Atomega is simply and in its entirety a single-arena game.

How it differs most from other arena games is in its execution.  Every player starts in the same location, as the same tiny glowing ball.  How you excel is by finding purple blocks.  Your first purple block will turn you into a cell.  The cell form is small and fast albeit weak and not useful in combat. As you continue to roam the level, you’ll be able to obtain more blocks by finding them or defeating other players to upgrade to the second form, a zoa.  These upgrades are automatic as soon as you obtain enough blocks.

Movement in Atomega is very simplistic, and the bigger you grow, the harder it is to navigate the terrain.  The larger Exoforms move slower, turn and strafe slower, but do much heavier damage than the smaller forms.  In fact, it’s quite easy to find yourself outmatched and simply a victim of circumstance when you, as a Zoa or Saur Exoform, just happens upon a Prime (large gorilla) Exoform, and it easily kills you with a few shots.  Levels are designed with each type of form in mind.  The smaller Exoforms can use underground tunnels or fit in places the larger forms can’t.  On top of that, there are power-ups that can enhance your Exoforms with a shield, do much more damage, make you a magnet to suck up nearby blocks and more, which can sway fights in your favor.  With each defeat, however, you’ll be back down to a glowing ball looking for a cubed home to restart your journey to grow and dominate the competition. 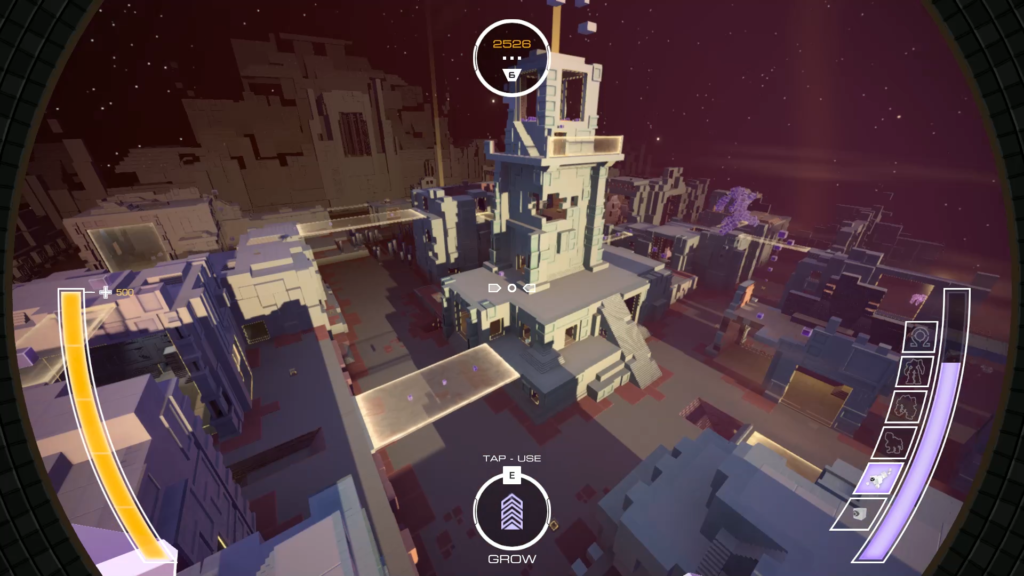 There is some strategy in place when it comes to evolving forms.  There is an option to teleport, that will devolve you to the previous form and take you out of harm’s way which is a better option than dying in a firefight. The smaller and nimbler forms also help you get out of harms way faster and are harder to hit, but they are also so much weaker, you have little to no hope of taking out larger forms with any consistency or without aid from another player. As each match only lasts ten minutes, the longer you can stay in the higher forms, or reach the Omega God Form, the better chance you have at killing the lesser  beings and staying at the top of the leaderboard.

When it comes to rewards, as you progress through the match leveling system, you’ll be able to unlock new colors and designs for your blocks.  At the moment these are really the only rewards worth looking forward to, and they really don’t enhance gameplay at all.  What Atomega does right is the excellent interplay between evolving and devolving the exoforms for more dynamic gameplay.  The matches are certainly fun and enjoyable, but where I feel Atomega went wrong is that there are too few choices in maps or game types, and no deviation in forms which eventually makes the gameplay repetitive. The game also falls victim to a matchmaking problem. If there are no populated matches, you get placed into the game world for 4 minutes while it tries to find players. If it doesn’t find any other players, you get kicked back out and asked to find another match.  There is no PvE or Bots that take the place of players, so if you can’t find others to play with, this has the potential to be a very lonely game. Luckily, Atomega is priced well enough that even the casual arena fan could find a lot to like here, for as long as the game stays populated.  If you find yourself looking for a great stand-in while waiting for your next big arena game, Atomega could be the game you’re looking for, just don’t expect it to evolve into more than that.

Written by
William Murphy
The Greatest Excite Bike Player of All Time (GEBPAT for short) and Editor in Chief of GameSpace.com and MMORPG.com.
Previous ArticleRule with an Iron Fish Review – Spare the Rod?Next ArticleVampyr Release Date Slips to Spring 2018