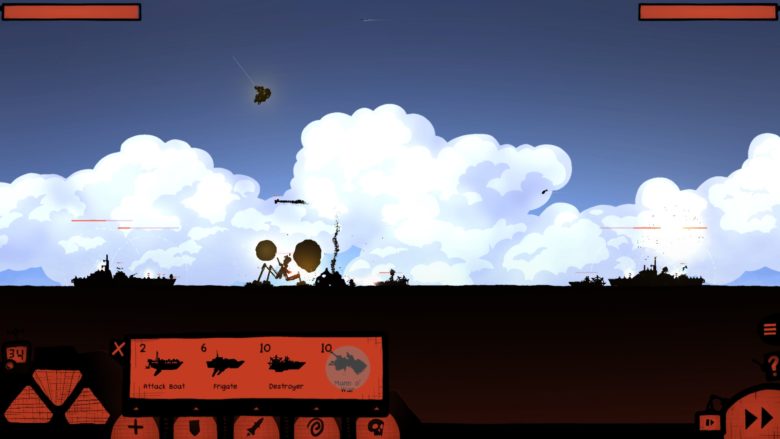 When you think of wargames using big battleships you probably don’t think of not being able to actually see the ship, rather just the outlines of it. Mecha Weka has done just this with their new minimalist title, Battlecruisers. In a post-apocalyptic world, fight like a robot looking to take control over some of the last remaining pieces of dry land on the Earth. But, is it any good? Find out in our quick-hit review below.

I have to admit when I first looked at this one I was a little skeptical about how good it would be. When you boot up Battlecruisers for the first time and are met with that shadow ship setup it is kind of like, ok I see you here Mecha Weka. Starter ships come with nothing on them so adding parts for crew supply, defensive, and offensive weapons is a must right away. Then other attachments can be added such as shields, aircraft, and boat hangers. This is what I find most fun about this title. The ability to determine where your parts go to maximize their effectiveness is a top priority when fighting other ships. The more missions you complete the more gear available for addition to your ships further down the road. This includes weapons like Nukes and Death Star type satellite weapons. The attachment system works well with how it is set up. Having spots restricted to certain types of attachments work well in some aspects and not others I think. I would like to build whatever, wherever and it is understandable that certain things make more sense where they are. 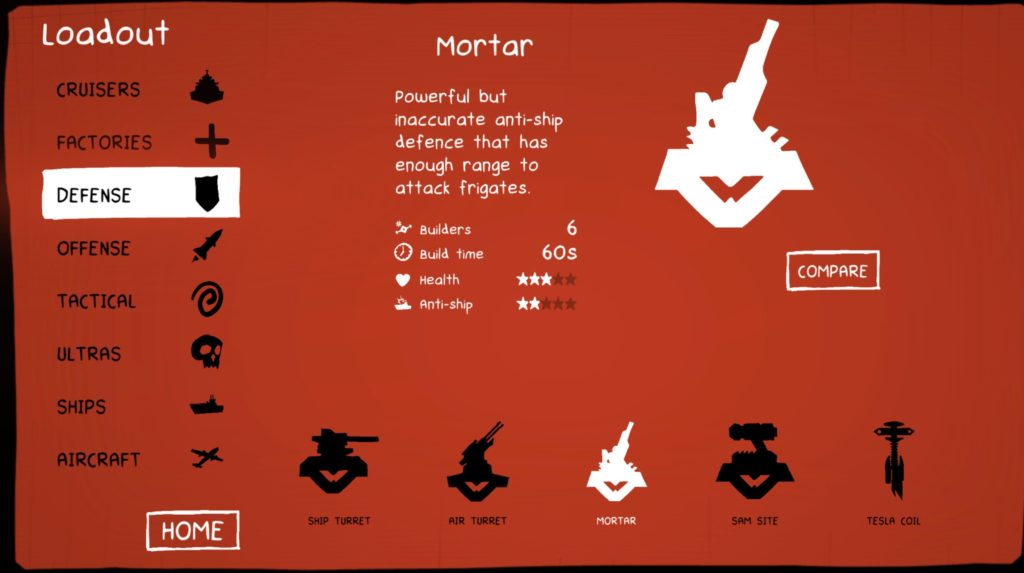 The music in Battlecruisers is good and it makes the situations tenser when the fighting is going on. In one of my first missions, playing on a harder difficulty, I was building shields and ships and the explosions started going off with the background music. It was very cool as far as that is concerned. Music can make or break a game and I am glad that this title has a good soundtrack to listen to while playing.

I don’t like the art style myself. Minimalistic styles work for this in some fashion but, I would love to see the ships and all the battle damage that would happen in a real naval battle. Only seeing black shadow ships and planes moving around is not my kind of gameplay. It is simpler to make this style of game because of the lack of detail required for graphics. I would call this a cookie-cutter title. Add any different type of outline into this and have a tank battle or a spaceship battle in space with smaller fighters flying at you. The number of different titles you could make off of one game code could be a cool stretch for this company but I would still like a better art style myself.

Overall, Battlecruisers, while it is a cool title to play I can’t personally get behind the art style and that is what normally turns me off to a game like this. It is fun for a little while and then it gets stagnant in how little there is beyond updating your ships and weapons. It is a build, shoot, kill, rinse, and repeat the action for each level. For a normal price of $5.99 USD, currently on sale for $4.79 USD, it is good for the cost and a budget-friendly title to have a bit of off again on again fun with.

Written by
Chris Bowman
Long time game enthusiast and writer. I have beta tested a lot of Mmorpg's since I was thirteen including Star Wars Galaxies, Lord of the Rings Online, and Star Wars The Old Republic. Currently attending The Art Institute of Pittsburgh for a degree in Game Art and Technology.
Previous ArticleBioMutant – System Requirements RevealedNext ArticlePathfinder: Wrath of the Righteous Talks About Romances