If you’ve never played an Atelier game, you’re not alone, neither have I.  That’s fine, however, because Atelier Lulua: The Scion of Arland doesn’t require prior knowledge of the series to play.  That’s not to say it wouldn’t be helpful, as the story is set within the same world as the other Arland games such as Rorona, so you would see familiar faces mixed in with new ones.  At it’s core it’s a crafting game based around alchemy, mixed with JRPG elements with a mediocre, at best, story. Is this game for you?  Continue reading to find out, this is our Atelier Lulua: The Scion of Arland review! 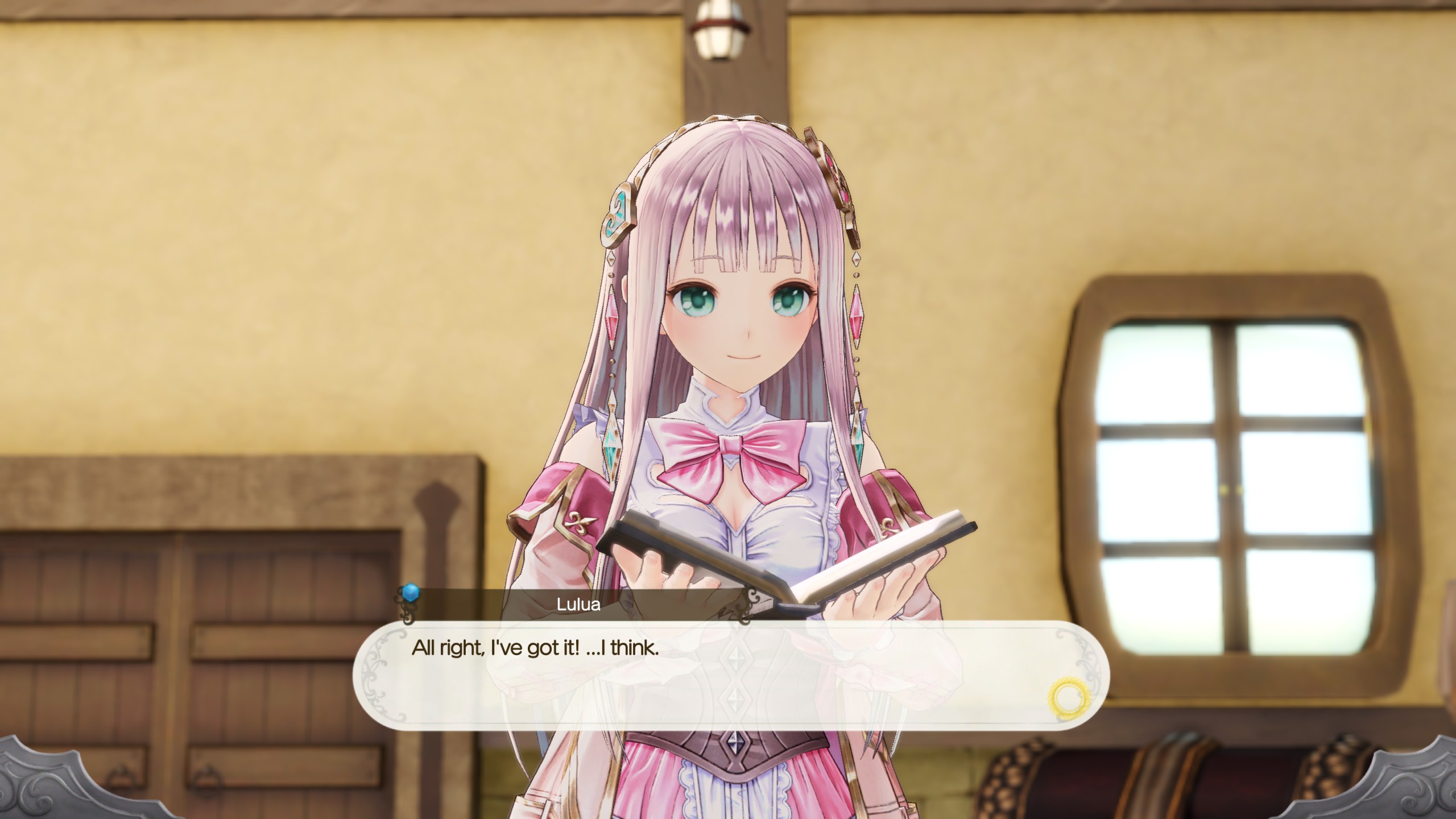 Centering around Lulua, the daughter of esteemed Alchemist Rorona, you play a fledgling alchemy student as you work to progress through the ranks of Alchemy and unlock the secrets of synthesis.  Unlike its predecessors, there are no time constraints to your crafting.  Back in Rorona, you were forced to complete your tasks every three months within a strict three-year period to save your Atelier.  The entire time constraint was removed with Lulua, giving you the freedom to play the game as you choose, within reason. You still must complete story chapters and side tasks to unlock recipes, but you can also purchase certain recipes from different vendors across the world map. The best part is you can spend as much, or little time as you please doing all of this, there is no time limit involved here! 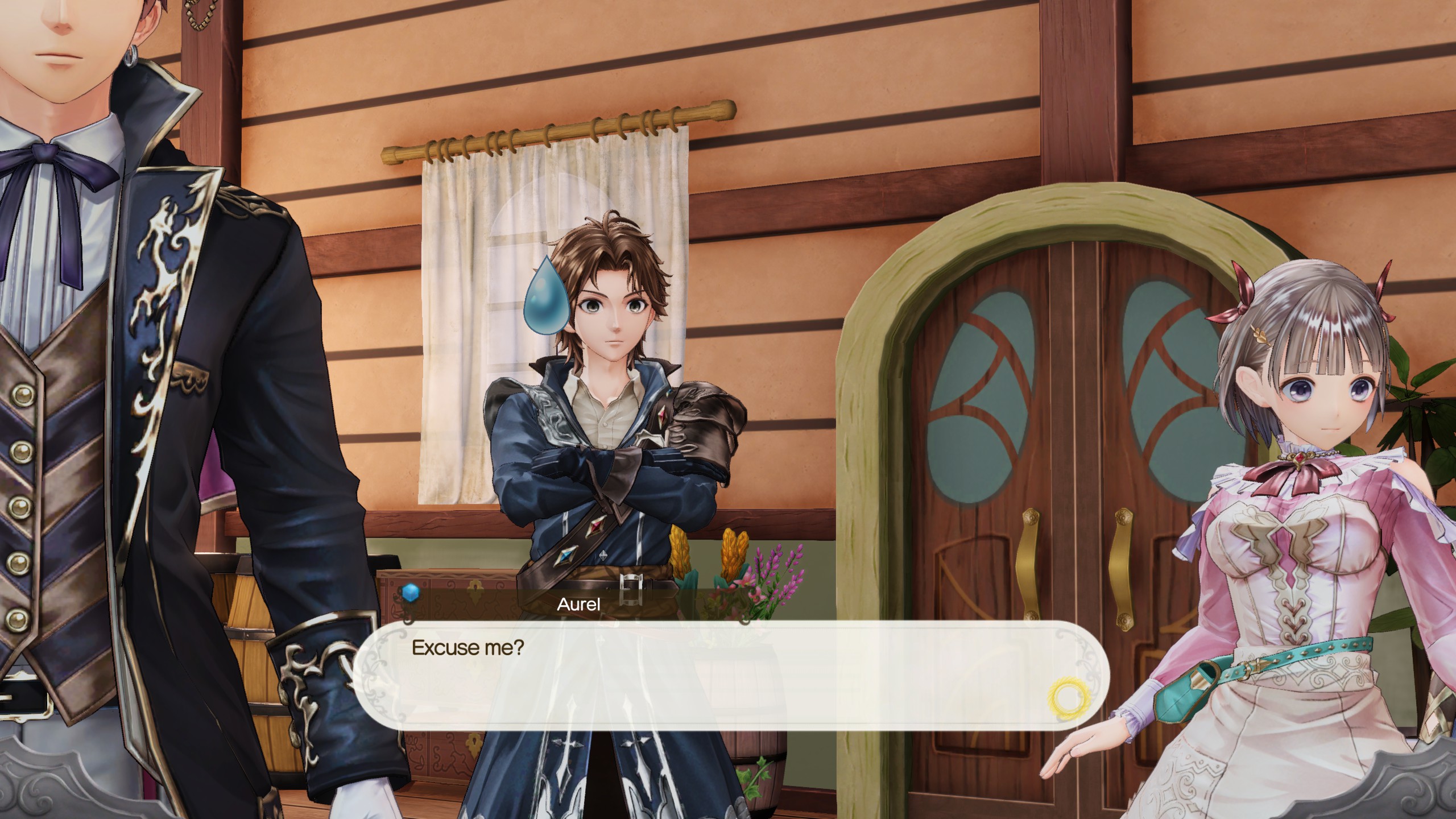 The Alchemy system is rather pleasing. While the above is true, regarding recipes, starting out you still have a lot to do. Crafting in Lulua is not a single layer system, there is far more to it than simply crafting an item.  While one item may be extremely easy to create, it’s far more difficult to reach the rank higher than D on an item.  The higher the quality, the better the item.  Finding out which materials work best to achieve the desired effect, and therefore creating a higher quality item, is where the game shines.  As I stated earlier, the focus of the game is to craft items, and it’s far more in-depth than it appears at first. 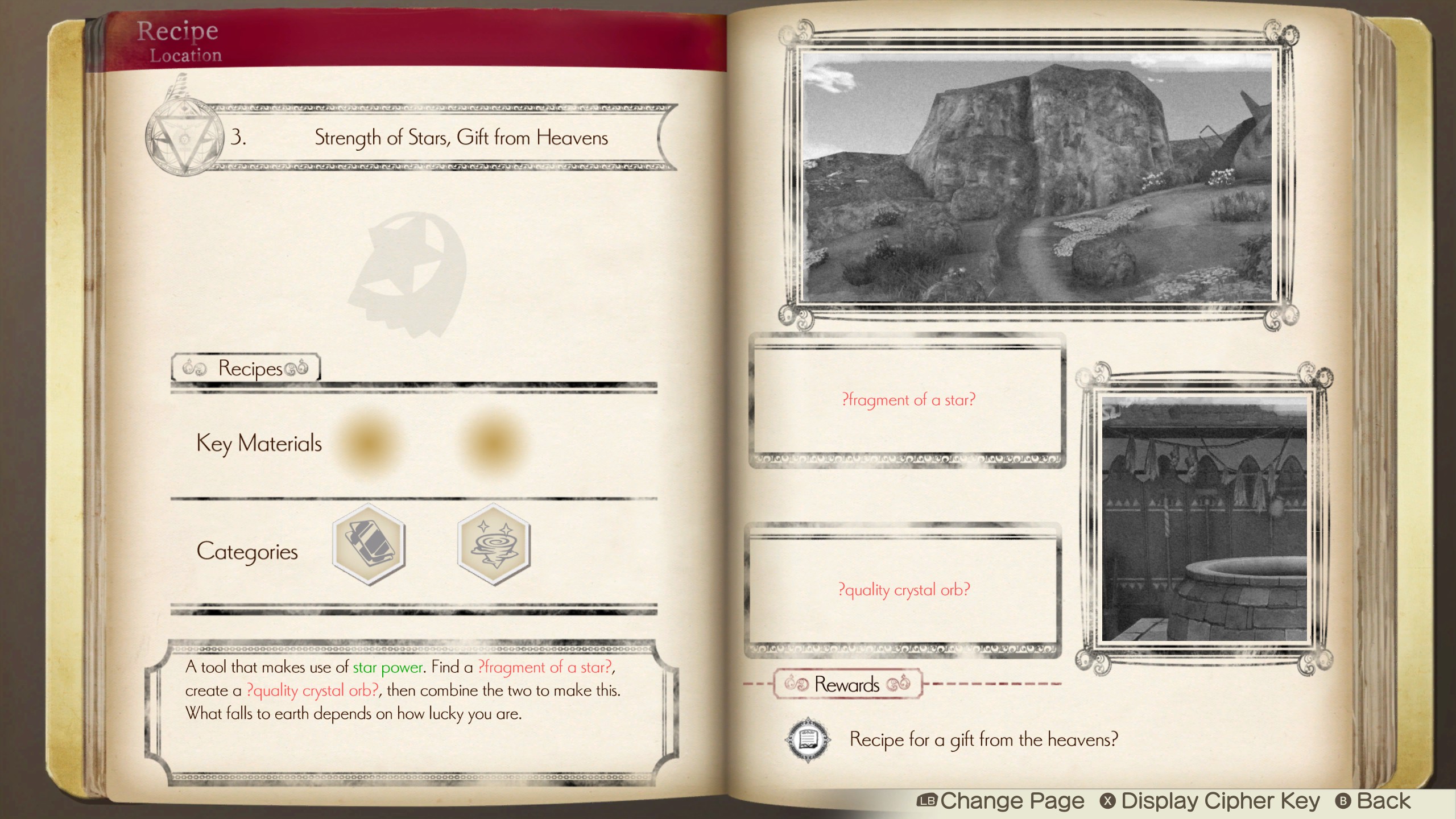 One system I wasn’t so thrilled with was the task system.  The task system is their version of a quest system.  You accept tasks from Inn keepers, or unlock them via main story, but they’re almost always in the form of a riddle. Some are extremely obvious, such as the screenshot above, others are far less obvious, forcing time sinks on you with meaningless content. I understand they didn’t want these tasks to be easy, they wanted them to have meaning in the game, but some of them are just not worth the time it takes to figure the riddles out. Granted, some of these riddles solve themselves as you play the game simply due to the fact that they are likely hidden behind areas you have yet to uncover.  It could be better, truly, this is one of the shortcomings of the game, one of my biggest complaints by far. I dislike trivial content in games, especially “RPG” type games. 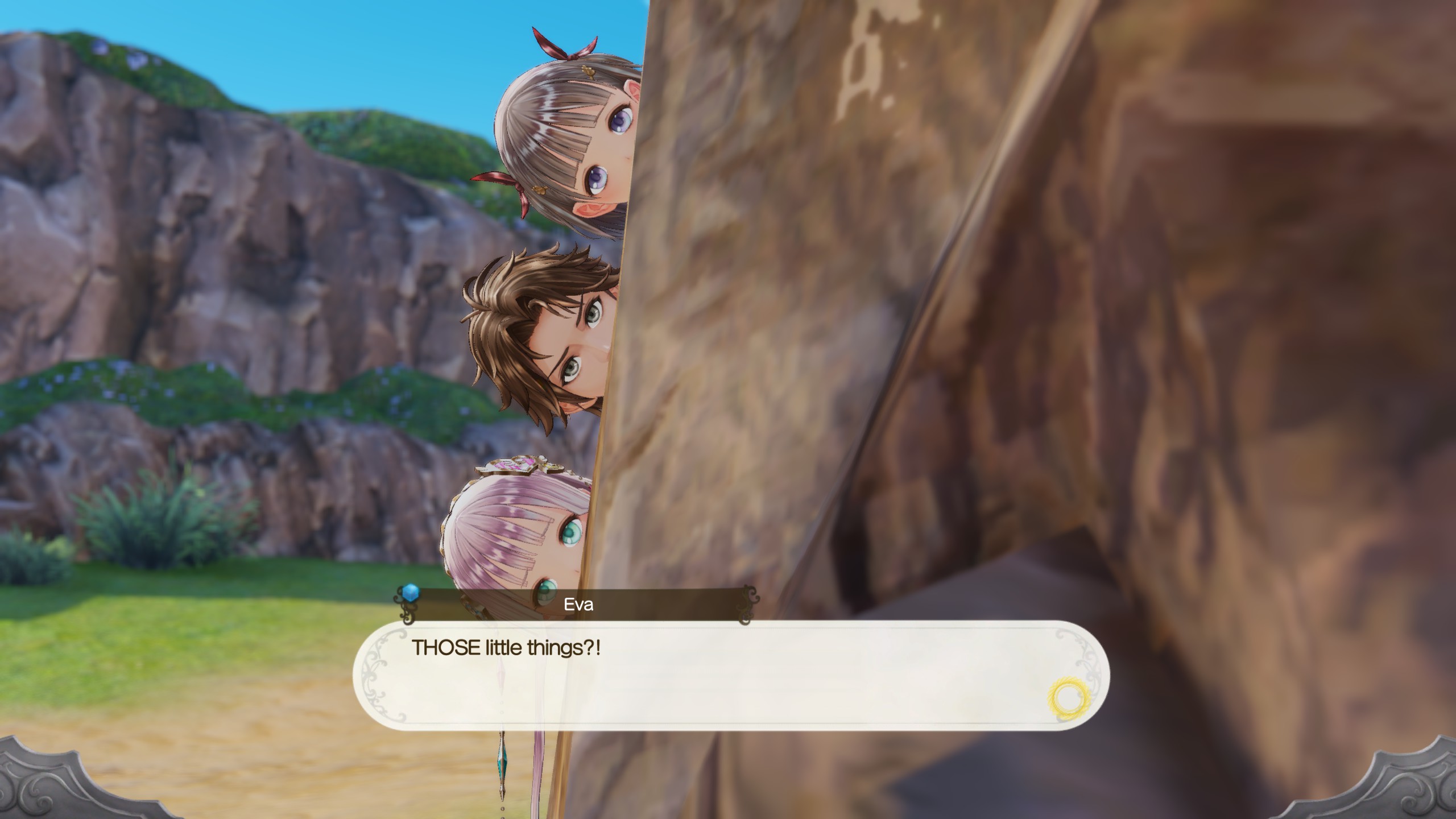 While my biggest complaint is the trivial content the task system brings to the table, my second complaint would be the story. There’s not much to say, truly, as there is barely a story to be had.  Instead of a significant story, it feels more like a tongue-in-cheek comedy show more than anything.  It has its appeals, but not something I really cared about.  I felt like it was more a hinderance than anything, with me rushing through a lot of the dialogue just to get back to crafting again.  If you’re into that type of thing, it may be interesting, but if you’re looking for a truly meaty story, you’ll be very disappointed. 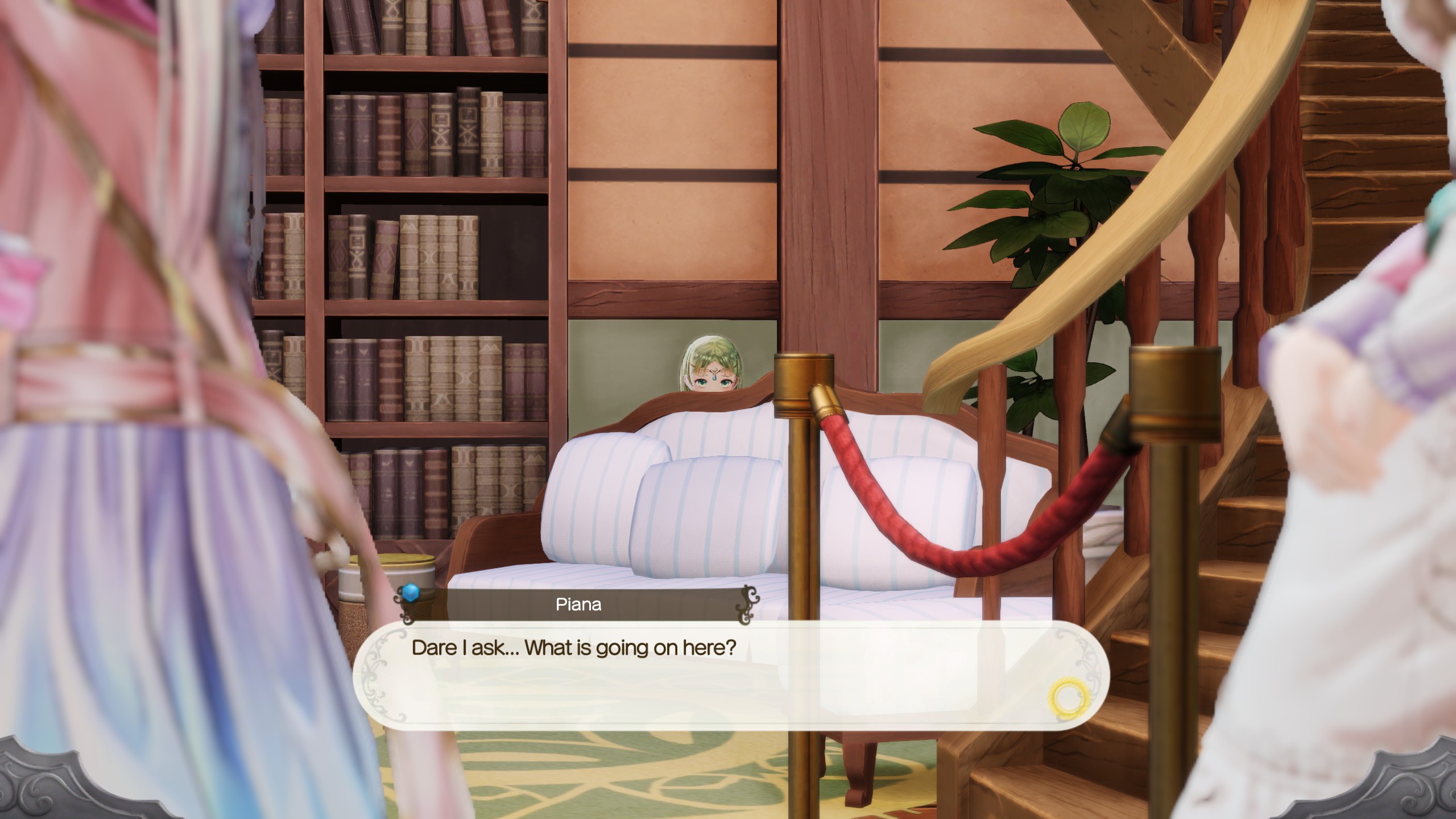 The JRPG elements of the game lie solely in the turn-based combat.  There are no random encounters, every enemy is displayed on the playfield and you can choose to attack, run, or avoid them as much as you like.  Fortunately, it’s not a bad combat system.  I enjoyed the combat system to an extent.  At times it’s rather boring because mechanics can be abused, but once you unlock more characters, better equipment, and higher-level mobs to fight, it really starts to get interesting. I’d suggest playing on a higher difficulty setting than normal if you really want a challenge, as most boss mobs were rather easy on normal, even at low levels.  Overall, the combat felt nice, abilities felt meaningful, and it only gets better as you level up and unlock higher level areas. 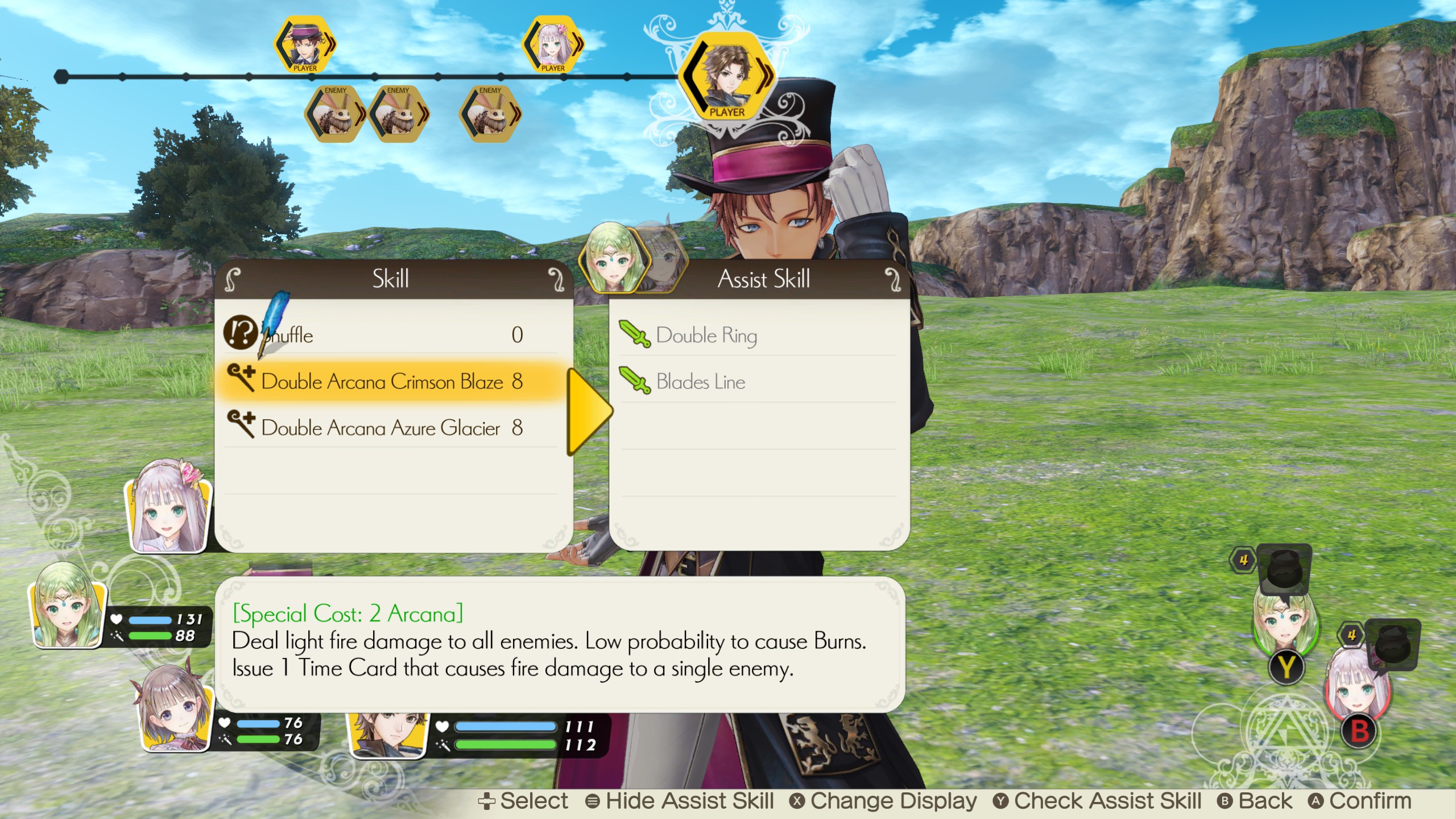 The graphical design and soundtrack are great.  I’m not a huge fan of super cute, frilly costumes, but the character design and overall graphical design is rather pleasing to the eyes.  The soundtrack is cute yet fitting to the overarching theme of the game.  They sweet, calming music is relaxing, and while it fits the maps almost perfectly, can get a bit repetitive and boring over time. The design of the game is that of a “cutesy” touch.  From the visuals to the sounds, it’s all about being cute, which I can see appeals to certain audiences, it just doesn’t really do anything for me.

Tags: Atelier, Atelier Lulua, Atelier Lulua: The Scion of Arland, Lulua
Summary
Atelier Lulua is a fun game to play in small spurts. It combines crafting/gathering with a decent JRPG combat system. While crafting and gathering can be tedious at times, the general concept is pretty fun. Discovering new ways to create better items is where the real fun lies. If you're looking for a game with a meaty story to it, you should look elsewhere. If you can overlook the story, and play simply for the mechanics, Lulua brings a lot to the table. The game is genuinely fun for the right reasons, it's a shame the story is so lackluster.
Good
Bad
7
Good 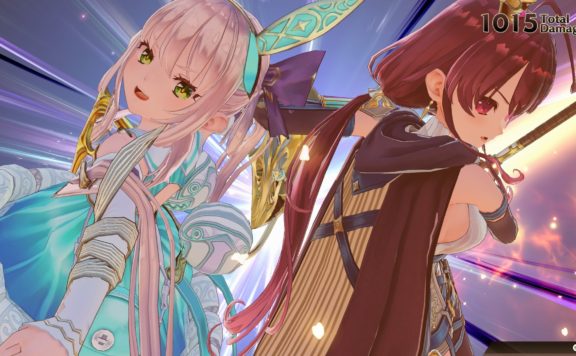 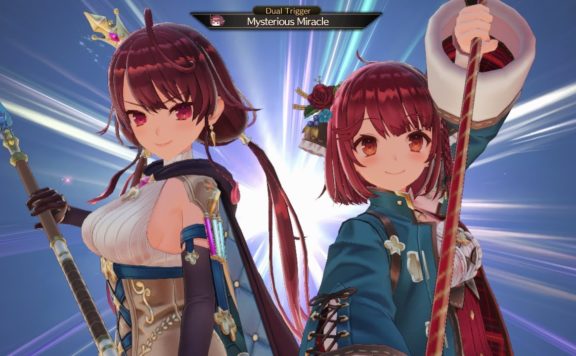 If you’ve never played an Atelier game, you’re not alone, neither have I.  That’s fine, however, because Atelier Lulua: The Scion of Arland doesn’t require prior knowledge of the series to play.  That’s not to say it wouldn’t be helpful, as...
0
Average User Rating
0 votes
Have Your Say!
Your Rating: 0
Submit
Write A Review
Genre:RPG
Developed By:KOEI TECMO GAMES CO.
Publisher:KOEI TECMO AMERICA
Series:Atelier